Well I'm now in week 3. To be honest I'm still incorporating recipes from week 1. I liked a few of the recipes from week 2 and have only had a chance to incorporate one recipe from week 3, although I am now allowed eggs, which I have had a few times. It's been a busy week and I haven't had time to make the full recipes that are given in the meal plan, so it's been a boring week of baked sweet potatoes with just some salt and pepper, green juice, the same smoothies for breakfast, a spinach and red pepper scramble and the recipe I'll share below: black bean and avocado tacos.

So, how's it been going? Well I'll tell ya. It's been easier than I thought, which doesn't mean I haven't still been having cravings and temptations but I'm having them far less than I anticipated which I consider a big plus! The best part? I feel better than ever! It's definitely working, I have more energy and feel really healthy. I can tell that I am getting in nutrients that I either haven't had or haven't had in this quantity before. I actually give credit to the green juice for that, although I have no proof to back it up. What I do know is that I feel vibrant after I've consumed it! So I'm soldiering on with this detox and thinking that it just might be changing my diet for good!! 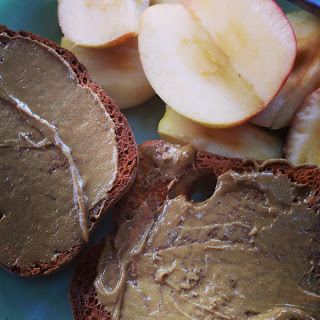 Although the Udi's and the sunflower seed butter are not technically on the detox, I figured that by week 3, I could "cheat" a little bit and incorporate something a little bit different. I really enjoy the Udi's gluten free bread and actually prefer it to regular bread when it's toasted. I actually planned on getting almond butter, which is allowed on the detox, but would you believe it- I could not find it at Trader Joes! So I decided to go with the sunflower seed butter because one of this week's recipes included toasted sunflower seeds and I thought it would be better than peanut butter.  What a delicious alternative to the other breakfasts I've been having.

what did I have for lunch? 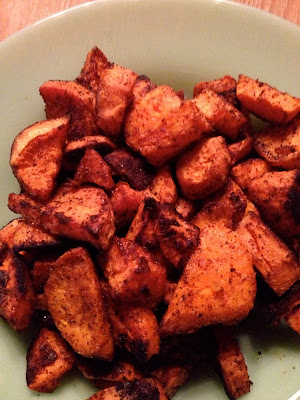 This is just a simple recipe really. I just peeled and cubed two sweet potatoes, tossed them in some olive oil with a shake of salt, pepper, cumin and paprika. Roast them in a 425 degree oven for about 25 minutes, tossing them halfway through. Easy, peasy. 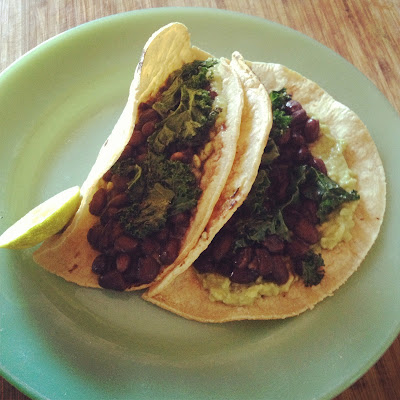 mash avocado, garlic, lemon or lime juice, cumin, salt and pepper together in a bowl. Set aside. In a small skillet I lightly sauteed the kale, just to soften and wilt it a bit. The original recipe calls for raw kale, but I don't like it completely raw. Heat black beans and toast corn tortillas over a low flame, flipping once. Add 1/2 avocado mixture, 1/2 of the black beans and some of the kale. Repeat with the second corn tortilla. This is so simple but so delicious!!!