If you've been following along with the posts this week, you'll know that I am doing a detox which features whole foods and fresh juices, found HERE.  Part two contains another glimpse into a day of the detox, featuring new recipes and thoughts on how things are going.

Well now it's getting hard. I've realized that basically all of my socializing revolves around food and coffee- so it's been taking a lot of willpower to still be present but not eating- making all of your meals and snacks is time consuming and if I didn't like to cook it would be a pain. I must admit, I feel a million times better so obviously something good is happening inside, but it's putting a cramp on my time outside the house around meal time. The only way I'm making it through is by bringing snacks with me that tide me over until I can get home and make my meal. It's easier at work because I prepare everything ahead of time, but I can't very well walk into a restaurant over the weekend with my lentils in hand!

So here's a glimpse into another day on the detox with new recipes.

Breakfast: Cucumber Pear Green juice. I did no modifications here, it's exactly as the Action Plan has it. 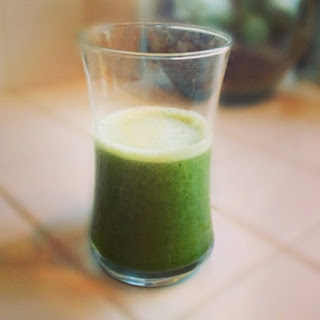 Put in your juicer, stir juice and drink immediately. This is a very fresh tasting juice! This is a great way to start the day or a fabulous mid-afternoon pick me up! I did a modification of this juice too, which was divine. I did the above, (although I left out the ginger because I forgot), plus a large handful of spinach, 1 large kale leaf, about half a bushel of parsley and one small pink lady apple. YUM! 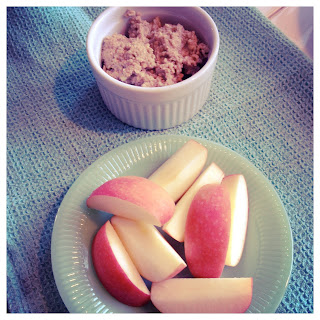 Soak raw cashews in hot water for 30 minutes. Transfer to a blender (I only used half the water), add cinnamon, and honey. Blend until smooth. Season with salt and refridgerate in an airtight container for up to one week. This stuff is so good that I'll keep it as a snack in my regular daily diet. It reminds me of cinnamon oatmeal. I had a hard time getting mine to blend, so mine stayed a bit chunky but it's still spreadable.


Lunch: Lentils. They have a recipe for French lentil salad, but when I followed their recipe the lentils came out mushy. So I follow the cooking method used in Forks Over Knives for their Lentil Salad with Lemon and Herbs (super delish, by the way!!) 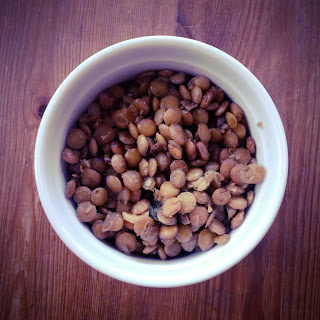 The only thing I modified from the Forks Over Knives Recipe is I used the Cleansing Broth from the Action Plan and added 1 diced shallot and 1 large minced clove of garlic to the pan while the lentils boiled and simmered. 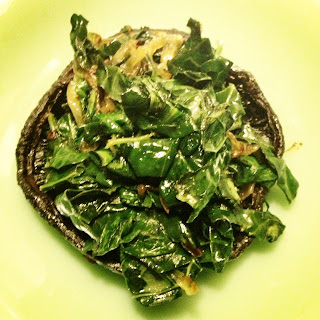 First marinate the portobellos in apple cider vinegar, honey, 1/2 the amount of garlic, 1 tablepoon of olive oil and salt and pepper. Leave mushrooms in mixture, covering, turning over a few times for at least 30 minutes. Heat oven to 400 degrees F. Place mushrooms in oven. Flip mushrooms once about halfway through the 30 minute roasting time, roast until tender.  While mushrooms are roasting, heat 1 tablespoon of olive oil in a large skillet over medium heat. add onions, remaining 2 sliced garlic cloves and pinch of red pepper flakes. Stir until onions are softened, about 5 minutes. Add kale (and spinach if using) to skillet, season with salt. Stir and cover cooking greens until bright green and soft. Serve on top of portobello.

This is hands down the best recipe of the bunch!! It's so good I'm adding it to my post-detox meal plan. Seriously it's restaurant quality! Big thumbs up and a big YUM!

Need a hot beverage? Detox drink throughout the day for all three weeks. Golden Elixir. 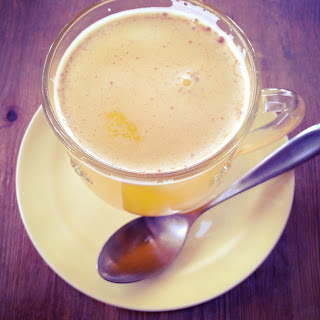 A few years ago when I had pneumonia I was having a similar tasting drink consisting of hot water, lemon, apple cider vinegar and honey. This spicy drink is a welcome flavor when all you are having are lentils, sweet potatoes and various veggies and fruits- even the savory things in this menu can be slightly sweet. You can have an unlimited amount of this detox drink as well as green and herbal teas if you choose.