I've been looking for the right detox/cleanse since the beginning of the year. Usually when I do a detox or a cleanse it is liquid based, but I was hoping to find something that included food- because well... frankly it makes me ditzy at work to just to the liquid ones or cranky and neither is good! I'd also been looking into purchasing a juicer since the beginning of the year and when Barefoot & Vintage recommended a brand through her Instagram I got to researching. Lucky for me that juicer was on sale (found HERE) and also lucky for me I spied the current issue of Whole Living Magazine while at Barnes and Noble. I bought it because the cover featured juice recipes but what I didn't know until I got home and explored it was it also contained the very detox I had been looking for! You could detox with whole, clean foods!!

They call it the Whole Living Action Plan- 21 Day Challenge! I thought I would share some of the recipes and my thoughts on this detox. I'm on day two but started incorporating some of the foods all of last week so I wouldn't have to start it cold turkey!

So I'll admit, I'm cherry picking with the foods a bit because some of the recipes don't appeal to me, or I need to use what I already have in my refrigerator before I can justify buying the other stuff but I am trying to follow it as best as I can. I am also a creature of habit so I've had the exact same foods two days in a row instead of mixing them up the way the Action Plan has you do it. So please note before reading that I am not following the exact Action Plan, which I plan to do the second half of the week.

Breakfast; Started the morning with the Blueberry Mint smoothie. I'm not a big mint fan (only with chocolate) so I took the mint out of the original recipe which can be found HERE. 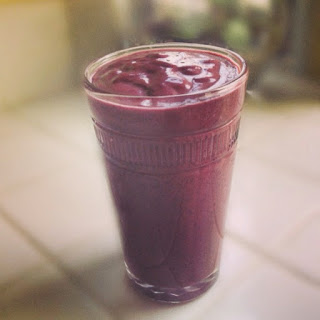 Blueberry Mint Smoothie, minus the mint!

Blend it all together until smooth and there you go! This smoothie is interesting because it is not sweet. I suppose if blueberries were in season that would help but it's tart and with the addition of the lemon juice, well sweetness never had a chance! The first time I made this I omitted the orange juice because I didn't see it on the list and was out of oranges. Boy oh boy was that one odd smoothie- tart blueberries and avocado! The addition of orange juice the second morning made the difference.  Don't get me wrong, this is still not a sweet smoothie with the orange juice but it helped the flavor.


Snack: Dried Apricots with unsweetened coconut flakes, and raw cashews. This is modified from their coconut trail mix. I modified this because I am cheap and already had the raw cashews and didn't want to purchase the pistachios or almonds- plus I couldn't find unsalted pistachios. 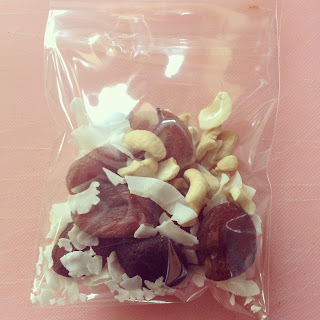 
Lunch: Salad with Roasted Beets. This is also modified from the Roasted Beets on Greens recipe. Again my modification was due to wanting to use what I had in my fridge- I have since purchased the items in the original recipe to use later this week. 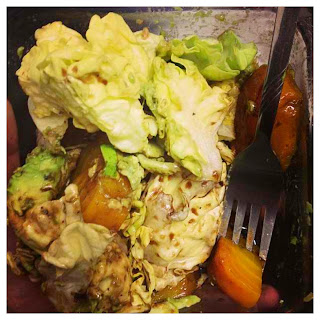 for dressing- I had homemade honey mustard dressing on hand: I never measure but just go by taste. This dressing consists of: Mostly balsamic vinegar, a little olive oil, some dijon or hot and sweet mustard from Trader Joes, a little honey and some salt & pepper to taste.

Dinner: Baked Sweet Potato with sauteed kale and spinach. Okay, okay so this is a modification from a week 2 recipe but this is what I had on hand and I figure since we are allowed sweet potatoes, kale and spinach in other recipes for week 1, I figured it would be okay to fudge a bit! 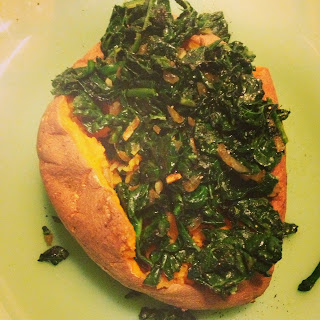 Heat oven to 400 degrees F. Prick the sweet potato (yam) to let heat escape. Bake potato until tender- about 40 minutes. Check around 30 minutes to see where it is at.

When potato is done, mince garlic and shallot. In medium frying pan add olive oil and turn heat to medium. Add garlic and shallots. Saute until the shallots are clear- about two minutes. Add shredded dino kale, stir and cook for about one minute before adding spinach. Saute kale and spinach until bright green and wilted.

Split potato down center and top with the kale/spinach mixture.