Stuff You Missed In History Class 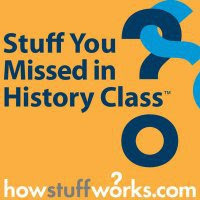 When trolling around for new podcasts to listen to I stumbled upon what has become my favorite driving companion, Stuff You Missed In History Class. I have learned so much in the last few months- more than I ever learned about history in school and about subjects I've never found interesting and would never pursue on my own. I find myself listening to stories about old time mobsters, way out west outlaws, female explorers and spies, famous aviators, Japanese turtle ships and WWII deception.

I look forward to my morning commute and evening drive home because I know I get to tune in and get my fill! I have a rule that I have to listen to at least half of each episode even if I'm not interested in the subject matter, because I want to learn after all. It's like a 20-30 minute biography. If find myself wishing that I wasn't driving so I could take notes or write reminders to look up certain people or obtain books.

Just the other day I was listening to a podcast in the 2011 archive about Australian bushrangers- I'd never even heard of them before, but there I was, eating up 3 episodes worth of information and bookmarking things on my phone. Or the episode on The Radium Girls- ladies who worked in factories applying radium treated paint to various objects. They would apply the paint to their teeth as a joke, glowing smiles all through the night! Little did they know that only a few years later they would lose those teeth among other things from radium poisoning. Or the episode that seriously had me researching late into the night excitedly telling my husband all of the details about the Halifax Explosion of 1917.

I have now discovered some new favorite subjects that I never knew I would be interested in. I find myself getting excited if I see episodes about female explorers coming up in my queue, or anything involving the Civil War- who knew?! Of course they cover subjects that I adore and have great interest in and I have to stop myself from jumping ahead in the queue to listen to those first. Who doesn't want to just jump ahead to Bloomers and Beyond: A History Of Underwear, or The Mysterious Disappearance of Agatha Christie or one of my very favorite subjects: The Empress Matilda (who I can proudly say I'm descended from on my mother's side)- The White Ship and Empress Matilda.

I have been so excited to spread the word but haven't found the time to sit down and feature Stuff You Missed In History Class- because I wanted to do it right. Well the time has come and I hope I've lit a fire under you to explore this wonderful podcast and all of the subjects it has to offer... and do yourself a favor, don't skip the ones you think you won't like it has broadened my horizons like nothing else!!

Next time you are wondering why kids Trick-or-Treat on Halloween, where mug shots came from, or who was Toyko Rose- you'll know where to go for that and so much more!!! Oh and be prepared to just love Sarah and Deblina!! ***(UPDATE: Our dear Sarah and Deblina have both departed from the show, but they've been replaced by the equally awesome and lovable, Holly Frey and Tracy V. Wilson.)

*Stuff You Missed In History Class is free on iTunes and on the web HERE. They can also be found on Facebook and on Twitter @missedinhistory.