I was in charge of bringing a pie to Christmas dinner. I could have bought a frozen one and made my life easier, but I just don't work like that- easy? Nah! So I went about brainstorming possible pie fillings. I wanted to do something different than I usually do (which is basic apple pie) so I settled on a pear pie. After asking some of my baking friends about this they vetoed the idea, saying that the pear wouldn't retain it's shape and it might just be mush! Not one to give up once I get the idea stuck in my head I decided to still do my apple pie but to put a pear twist on it! The apple pear pie is born! 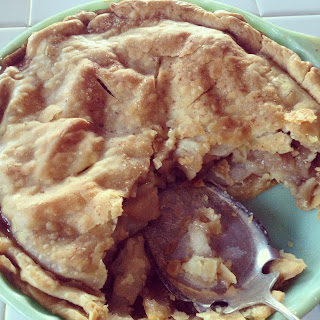 I got carried away with all varieties of apples and pears and I feel that the mix is what gave this pie the full flavor it had. While I feel that the apple mix is not as important and you can substitute your favorite, the pear varieties are a bit more important. I chose firm varieties so that they would retain their shape and "body" after being baked- these varieties will be listed below. 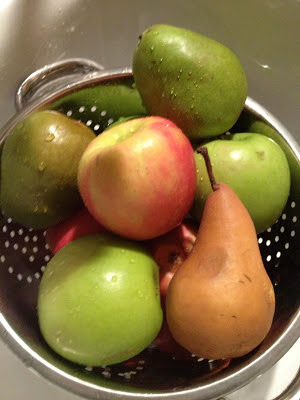 Normally I make my crust from scratch but I had a sinking suspicion while shopping for ingredients that I should have a back up plan of ready made pie dough- thank goodness I did because I was so busy that by the time I got around to making the pie it was 9:30 pm on Christmas Eve!!! Talk about cutting it close! There was no way I was going to be able to make a crust from scratch and get a good night's sleep! If you find yourself in a similar predicament the Pillsbury brand ready made pie crust is a decent substitute.

This pie was a hit! All those delicious components complimented one another but were unique enough to provided a new surprise each bite! If you're in need of a pie with winter fruits this one is sure to please!!


What you need:
(filling only. crust recipes can be found here if needed)

* 3/4 cup all purpose flour (I like my filling to be dense and thick- when you cut into the pie I like it to stay together. If you like a bit more "sauce" to your filing use 1/2 cup flour instead. )
* about 6 cups apples. I did 2 large Pink Lady and 2 large Granny Smith- both peeled and sliced thinly.
* about 1 cup pears. I did 1 Anjou and 1 Bosc  peeled and sliced thinly.
* 1 cup white sugar
* 1 cup brown sugar
* 1 teaspoon cinnamon
* 2 tablespoons butter
* a little cinnamon and sugar mixed together to sprinkle on top of pie.

Preheat over to 375 degrees F

In a large bowl combine the apples and pears with both the brown and white sugar. Add flour, cinnamon and continue to mix until they are well blended. The juice of the fruit will help to blend all
the ingredients. 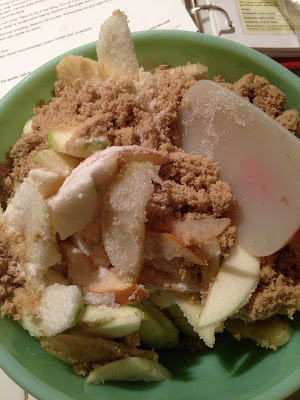 In your pre-rolled pie crust bottom pour your filling into your pie plate. Spread the apple, pear mixture evenly, taking care to make sure the apples and pears are laying flat. You don't want them to poke through the top pastry as you roll it on. Once the filling has been evenly spread, cut your butter into small pieces and place randomly on top of filling. 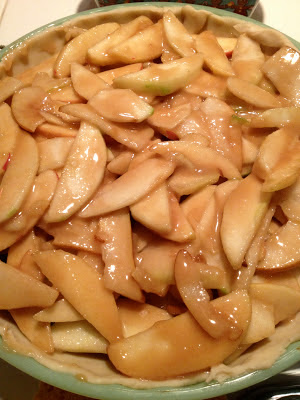 Roll your top pastry on top of the filling. Trim edges if you need. Crimp the edges as desired. Cut slits to allow the steam to escape as pie bakes. Sprinkle some cinnamon and sugar on top of the pie- (this is so good!!) 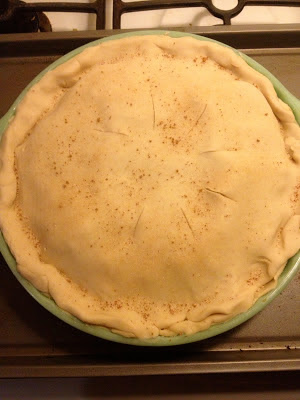 Cover the edges of the pie with foil to prevent it from over cooking. Bake for 25 minutes with foil on edges. Remove the foil and bake uncovered for an additional 25 minutes (or until golden brown). 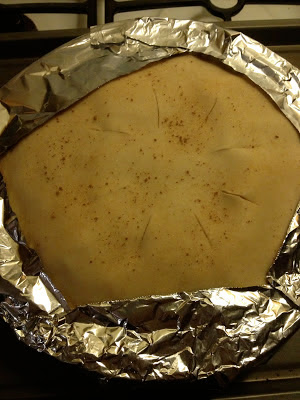 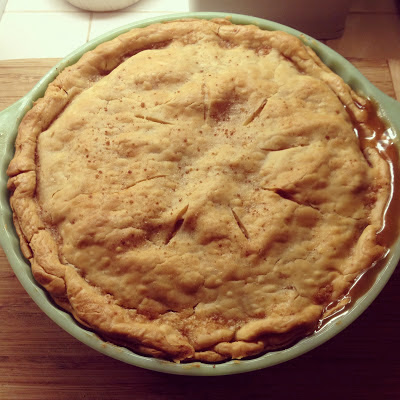