For years now the words Genoa cake have been bouncing around in my head- my husband, a native of England has casually mentioned it off and on through the years and this year I decided to research and try to tackle it! 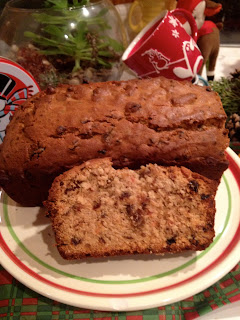 So what is it, first of all? Well, despite the name it has only a passing resemblance to the Pandolce cake that originated in Genoa- this is instead a light fruit cake consisting of raisins, golden raisins (sultanas in the UK), currents, citrus peel, and glace cherries. I referenced a few recipes and there are some slight differences but the basics are the same. After searching and searching I could not find a single recipe that has American measurements or oven temperatures, so I did some detective work and hey-ho!, I got it all worked out. You should have seen the scribbles, the google searches and the borrowing of measuring devices! My mother has the most amazing measuring cup called Metric Wonder Cup that absolutely saved the day! You'd better believe that one of those babies is on it's way to me as I type!

I did all of the hard work for you, took the guesswork out of oven temperatures, timing, and ingredient variations- what's left is a moderately hard (lots of prep work, but the recipe itself isn't so bad!), super delicious bread that will please any crowd! After having a taste myself I can understand why it's a holiday tradition across the pond- I am now adopting this seasonal, festive treat that tastes like home and smells like Christmas!

What you will need:

1 cup butter
6.4 oz of caster sugar*
4 eggs separated- the yolk and the whites are used separately in this recipe- very important!
1 teaspoon almond extract
7 tablespoons milk (this was an addition to the recipe which I did not do the first time- hence you will not find it in the photos below. After reading reviews I altered the recipe the second time I made it. This was necessary.)
1 tablespoon grated orange and lemon rind.
1 1/2 cup raisins, chopped roughly
1/2 cup golden raisins, chopped roughly
1/2 cup currants (I had trouble finding currants, so I upped my golden raisin measurement to a cup)
1/2 cup candied (glace) cherries cut in half. see here, if you can't find them ready made.

*caster sugar is a finely ground sugar, but not powdered or confectioners sugar. I have had someone tell me that it is called baker's sugar here in the states. I had trouble finding that (I'll admit it was last minute so I'm sure it's out there and available). My solution was easy: I put regular granulated sugar in a coffee grinder and went to town for about 10 seconds- perfect finely ground sugar!!

*If you do not have the baker's sugar, then pulse your sugar in a coffee grinder or food processor. Set aside. 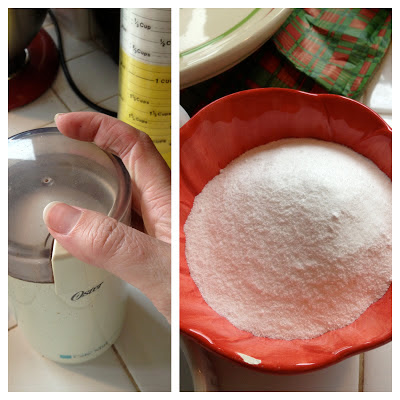 *Separate the eggs. If you need instructions for this see HERE. Set aside. You will be using both parts of the egg in this recipe- so don't throw away either the yolks or the whites! Set them both aside. The egg whites will be whisked later in the recipe.

*Grind the almonds. I suppose you could use almond meal, but I wanted to stay true to the recipe so I ground my own raw almonds. Set aside

*Chop the raisins, and candied cherries. In a small bowl combine all of the fruit with about a teaspoon and a half of flour. Toss and coat the chopped fruit with the flour. This will keep them from clumping together when added to the batter. Set fruit aside.
* And lastly on the prep list: combine the ground almond, baking powder, flour and cinnamon together in a med/large mixing bowl. Mix well and set aside.

In large bowl either use a hand held mixer or a stand mixer: cream together the butter and sugar. Beat in the egg yolks, almond extract and citrus peel. After mixed thoroughly, add 3 tablespoons of milk, one at a time and mix. (The 4 other tablespoons will be added later as you add the flour)

Alternate pouring a spoonful of the fruit mixture and a spoonful of flour mixture into the above batter until everything is well blended- adding the remaining 4 tablespoons of milk one tablespoon at a time while alternating the fruit and flour.

Pour into a greased or non-stick bread loaf pan. Place in pre-heated oven (375 degrees F). Bake for 30 minutes, then reduce heat to 315 degrees F for another 60 minutes. Please check frequently for the last 8-10 minutes, as it may be done sooner. Check for your bread/cake to be springy to the touch and a skewer/toothpick to come out clean when inserted in the center.

Leave it to cool in bread loaf pan, then remove from pan and finish cooling on a cooling rack.
Slice and enjoy! 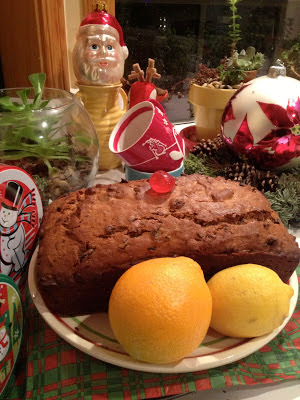 Will this become part of your holiday traditions too?!

Need a conversion site for other UK recipes? You can find a good one HERE.