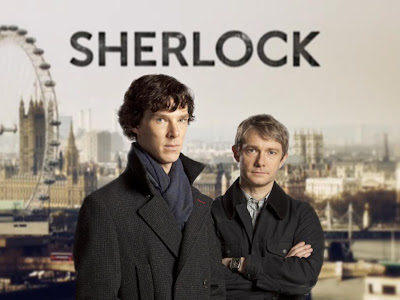 This is technically not a film, but this series might as well be. Each episode plays like a movie- 89 minutes long- with wit, cliffhangers, puzzles,  and clever adaptations from the original Sir Arthur Conan Doyle stories. There are currently 2 series, each with three 88-89 minute episodes, with the 3rd series set to air sometime in 2013 (or dare I say it, 2014- cue sobs!!!!!)- and yes it's maddening that I can't be more specific. Those darn people in charge are being vague about when it's going to happen and apparently the main stars (Benedict Cumberbatch and Martin Freeman) had prior engagements that will prevent them from filming the 3rd series when planned. Gosh, Star Trek 2 and The Hobbit, thanks for ruining my Sherlock experience!

This Sherlock is different than the others. First and foremost it's set in modern day London- not the Victorian era of the originals. This threw me off when I first started watching it- I thought to myself, "Surely this is just setting us up to go back in time?!" But no, that is not what it does- we stay firmly in the modern era. Sherlock loses nothing- absolutely nothing by being set in the 21st century, as I first feared.

Our modern Sherlock is a tech savvy genius who instead of having a cocaine/morphine addiction like Conan Doyle's character has a nicotine/nicotine patch addiction. He works as a freelance consultant for the Metropolitan Police Service, although not always welcome or at their bidding. Meanwhile, Dr. Watson is introduced and we discover he suffers from PTSD as well as a leg injury after returning from military service in Afghanistan. He is at first bowled over by Holmes, a bit of a doormat but eventually our Dr. Watson gets his backbone- albeit quietly- and acts as friend, sounding board, and moral compass for Holmes.

Let's talk about my very favorite moment in the first episode of Series 2, when Moriarty has Sherlock and Watson at a great disadvantage- it's an extremely tense moment, is Sherlock going to shoot Moriarty? Is he going to blow up the place? You're waiting, maybe even holding your breathe and then... a bass line we all know- The Bee Gee's enter the picture- never has "Staying Alive" seemed more ridiculous but also so very, very appropriate!

Every episode is a treat, just masterfully done, and you can't wait for the next one!! I'm not ashamed to say that I shed a tear at the end of Series 2 because well, surprise it's a cliffhanger and I can't tell you!!