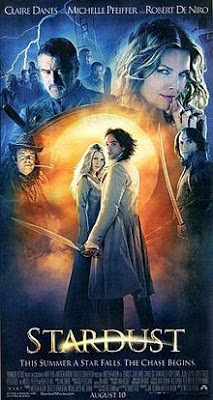 I had the pleasure of seeing this film in the theater, which is definitely the best way to see it, but by all means not the only way! As I've said many times before, I am a big fan of whimsy. I love magical things and this story is magical in capital letters! I mean, our feisty heroine is a falling star for goodness sakes- if that doesn't scream whimsy I don't know what does!

Claire Danes is the above mentioned star, Yvaine who is helped to earth so thoughtfully (cue sarcasm here) by the dying king of Stormhold who throws a giant ruby from his deathbed- sending his sons on a quest to retrieve it and become king of Stormhold, a realm of magic. Meanwhile in the non-magical world, Tristan (Charlie Cox)- our future dashing hero- fancies himself in love with Victoria (Sienna Miller) the village beauty and promises to bring her the fallen star she sees in the distance for her hand in marriage.

Tristan sets off in search of the falling star, crossing a wall that has been erected to separate the magical world of Stormhold from the non-magical English village of Wall. There are quite a few stories going on here at once but being cleverly adapted from a book authored by Neil Gaiman the story manages to keep it all together with no confusion. Let's go over the subplots that serve to enliven and deepen the story of Tristan and Victoria and by default our fallen star Yvaine.

First we have the king of Stormhold and his seven sons- they are one of my very favorite plot points. Each son is vying for their chance to be king and then literally dying for that chance as brother is pitted against brother and encouraged by their father to knock each other off. One by one they are picked off, Sextus by fire, Quintus by axe, Quartus frozen to death,  Tertius by poison, Secundus is pushed out a window and finally Primus who's throat is slit by the witch Lamia. This leaves only one prince left- Septimus. Why is this a favorite plot point when it sounds so gruesome? Because they come back as hilarious ghosts who's commentary is priceless!

Then there are the three witch sisters- Lamia, Momo and Empusa. Lamia (Michelle Pfeiffer) is the eldest of the three sisters and the leader of the pack- they gain beauty and long lives through the eating of a fallen stars heart. Their last star was 400 years prior and they are eager for another. Lamia sees Yvaine's fall to the earth and so begins a different sort of quest for the witches. Lamia is the main protagonist, although Yvaine is also being pursued by the princes Septimus and Primus because she is in possession of the ruby they need to become king.

Another favorite plot point is Captain Shakespeare played brilliantly by Robert DeNiro.  Captain Shakespeare has a reputation as a ruthless sky pirate and when Tristan and Yvaine find themselves unwittingly aboard his ship you wonder if these two young people have jumped from the pot to the frying pan. I don't want to give anything away but let's just say there is a rather unexpected Moulin Rouge style can-can!

So how does it end? Who becomes king of Stormhold? Do the witches get the heart? Does Tristan woo Victoria with the star Yvaine? And who, pray tell IS Tristan's mother?- cuz that ends up being kind of a big deal!