I was of two minds before I watched this movie. Part of me really wanted to love it and part of me hoped it was bad. I was not too jazzed by some of the casting but stoked about others- the dwarves? Genius (and seriously underused!!)! Charlize Theron as Ravenna? Double genius!! I am none too fond of Kristen Stewart as Snow White (a bit too one dimensional and unconvincing) and even less fond of Chris Hemsworth as the Huntsman- they have no chemistry! 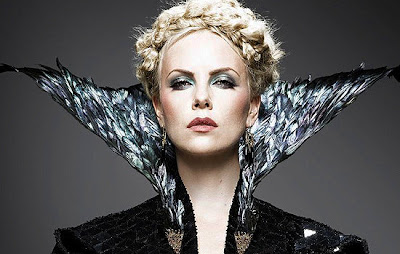 What I did love was how dark and gothic it was, the original is based on a Grimm's fairy tale after all not Disney! ...and without the dark how would we appreciate the gorgeous over the top forest that is Sanctuary (home of the fairies) and that absolutely stunning stag- (what a moment!)? I must say also that Charlize Theron's costumes deserve a feature unto them selves!

This is one of the first times I've watched a movie that heavily relies on CGI and I didn't notice the absolute fakeness (except for the troll- you can't win them all!). The mirror was sadly sparsely used if you ask me- I loved that it melted from the wall and stood up like a liquid copper, cloaked figure.

So how does it differ from the Disney version? The list would be a long one so it's better to ask, how is it like Disney? There is a huntsman, dwarves, a girl named Snow White and an Evil Queen- oh and the poison apple. That's where the similarities end. This Snow White is less magical/charming and more warrior queen (or at least they want her to be)- she's still innocent but she wields a sword. The Evil Queen is so twisted and spooky- I wouldn't want to get on her bad side, she'll steal your very life essence! The Huntsman plays a central role in this version and he ends up being Prince Charming (but not a prince and not charming). There is a second love interest in this version too, a childhood playmate- the son of the Duke of Hammond. He comes to rescue Snow White while under the guise of the archer for the equally evil brother of the queen. There are 8 dwarves and 1 dies- which way bummed me out, that is probably the one time I preferred the Disney version (well other than the fact that I love the Disney Snow White- Kristen Stewart's Snow White is just meh!). There is also an addition of a community of women living in a floating village who have voluntarily scarred themselves so as not to be more beautiful than Ravenna and attract her attention- some may scoff but I actually like the addition of that story line. To me it helps to explain why no one has managed to surpass the Queen's beauty in all that time.

There is some cheesiness and moments where you simply have to suspend belief but this is supposed to be a fairy tale my friends- some things are just going to happen without explanation! I've read some scathing reviews but I'm guessing the the authors are not fans of fantasy or fairy tale. I would agree that it is flawed for sure but if nothing else enjoy the stunning visual and Charlize Theron's wardrobe. My one addition if I could make one? Tim Burton... a girl can dream! 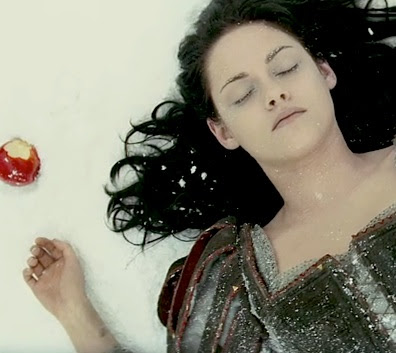 a fun little side note: the sisters of Pixiwoo did an amazing make-up recreation of the top photo of Charlize as Ravenna. Check it out here- it's beautiful!!
Labels: Brothers Grimm Fairies film Grimm Fairy tales movie monday movies Snow White Snow White and the Huntsmen