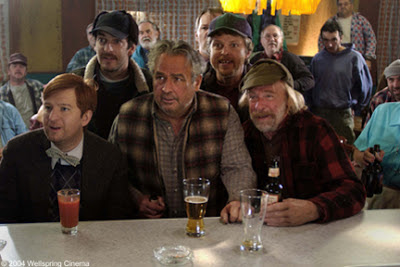 This is a delightful French Canadian film originally titled La Grande Seduction. Subtitled in French you quickly figure out the plot and find that you hardly need to refer to them while you are busy giggling. I don't know what it is about films like this- small coastal villages, a cast of quirky characters, the winning over of outsiders or just finding that what they needed was right at home (the Irish movie The Closer You Get also comes to mind here!) that I just love, but I fall for them every time even when they might be cliche!

Seducing Dr. Lewis introduces you to the tiny fishing village of Ste-Marie-La-Mauderne located off the north coast of Quebec. The village is in decline, all of its inhabitants subsisting off of welfare, since the decline in the fishing trade and no other industry to support the population. The village must hatch a plan to entice a plastic container factory to the area. The plan? Well the factory owner insists that there be a resident doctor in the village which they do not have- oh and a small bribe of $50,000. They go about trying to figure out how to lure a doctor to the area... Enter Dr. Lewis.

Dr. Lewis is an uppity plastic surgeon from Montreal who gets pulled over for speeding- he also happens to be in possession of drugs at the time. As luck would have it for both parties involved the officer is a native of St.-Marie-La-Mauderne who is apprised of the situation back home. In exchange for the officer not arresting Dr. Lewis he is convinced to leave Montreal and spend a month in Ste-Marie-La-Mauderne. Yes, I know this is far fetched and you may be thinking- That's just dumb, I'm turning it off- but stick with it. I mean, the screenwriters had to get the Dr. to the village somehow and they did need something that would keep him there.

The villagers have taken it upon themselves to spruce up the place in advance of the Dr.'s arrival. They have also decided to tap the phone in his room where he is staying so that they can have insider knowledge of the things he loves- beef stroganoff, cricket, fusion jazz- they aim to create his version of paradise so he will never want to leave!

A perfect, lighthearted comedy sure to get at least a chuckle or two, even if you want to roll your eyes every now and again (you cynic, you!)