When you're on vacation in an unfamiliar place I don't think there's much that could be worse than a GPS navigation system that is wrong. Just. Plain. Wrong. Our system was brand new, purchased especially for this trip so it should have been preloaded with the most up to date maps- and we were promised just that in the description. Well, Tom Tom if you didn't get us through many a confusing lane change on the M25 I would have thrown you out the window with a good riddance and so long sucker! 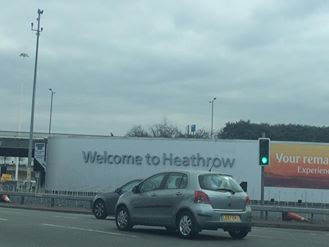 We arrived in London at 3pm, tired and anxious to get to our hotel to freshen up. We had picked up our rental car with no problem and fired up the GPS. First it couldn't find a signal, and then it told me that the road I was looking for didn't exist. Okay new tactic. I tried searching for our hotel in the list of "places of interest" near our location. Bingo!

The roads around Heathrow airport are confusing at best. Lots of one way roads, no "U" turns allowed, and barriers keeping you from turning left or right when you need to. I suppose it would have been manageable if a million other cars weren't jostling for position, cutting you off and generally adding to the chaos themselves. The GPS finally ferried us to a hotel. A hotel that was not ours. It stubbornly insisted that we had "reached your destination" when in fact we found ourselves staring at Leonardo Hotel and not Holiday Inn. We parked the car and decided to go in on the off chance that in the 6 months since I'd booked the hotel that it might have changed hands. No such luck. I will say that the girl at reception couldn't have been nicer about it. She said that it happens all of the time with the Holiday Inn and people's GPS systems. She gave us directions to our real hotel and sent us on our way.

Well immediately we realized the directions were not great. She told us to go right out of their driveway and there in front of us was a concrete barrier that said, no you will not go right. So we had to turn left and make a "U" turn several blocks later. The rest of her directions went something like this, "follow the signs for Terminal 5, your hotel is huge, you can't miss it." The signs for Terminal 5 took us, surprise!, to Terminal 5! There was no huge Holiday Inn on the way and we found ourselves back where we started. At this point I decided to try the Tom Tom again. There were several Holiday Inns listed and all of them on the road we were trying to find. I chose a different hotel on the list from the first one and off we went again. And wouldn't you know it, Tom Tom took us BACK to the Leonardo Hotel and once again stubbornly accounced, "you have reached your destination." Not to be fooled this time we kept driving hoping to stumble upon our actual hotel, that we had paid for. In. Full.

We did come across a Holiday Inn after a wild goose chase that included getting back on the M25 (or the M4- I can't remember now), which we knew full well wasn't our actual hotel as it didn't match the picture that I had printed of the one we had a reservation with but we were desperate. We decided to go inside and ask them for directions. We got the new guy and when we asked where our hotel was located, responded with, "I don't know. There are 5 Holiday Inns on this road." FIVE! Why?!

He asked a coworker who called our correct location. We were finally given some real information that would actually resolve our problem. They gave us a name of a cross road to punch into the GPS since our system didn't recognize either the name of the street or the post code we were given. So after THREE hours of this nuttiness we finally arrived at our hotel which we never would have found in a million years on our own without that cross street reference. So if you're staying at the Holiday Inn London Heathrow T5 and are using a GPS to get there remember Poplar Close- it'll save you 3 hours of insanity!

Right about this time we were questioning whether we should have left the Shire to go on this awfully big adventure. And my husband's response... "I bet this didn't happen to Angelina."

But you know what? We were just grateful to finally have a bed to crash in. It was dark by this time and any ounce of energy we may have had from the fitful 2 hours of sleep on the plane was long gone. We had actually thought we'd head into London and begin our trip with a little late afternoon site seeing and dinner. HA! That was definitely off the table after our frustrating and emotionally draining circuit around Heathrow. We contented ourselves with my outrageously overpriced bag of almonds purchased in desperation at LAX, a granola bar that I hadn't eaten on the flight, and hotel water.

We could only go up from here!