After an eventful, if not extremely frustrating beginning to our trip outside Heathrow the only thing to lift our spirits and convince us that we hadn't made a monumental mistake by getting off the plane was to get ourselves to a cathedral stat! I have never seen England by car, my previous trip was entirely by bus and train, so it was with entirely new eyes that I greeted my first day in Blighty.

I was completely unprepared for how populated the area around London is. Cars and people everywhere- just chock a block! This made navigating stressful even with the help of a gps system. I really counted my blessings that my husband was driving instead of me, because I just might have pulled over and given up. You'd find me there to this day curled in the fetal position.

Our first sanctuary was St Albans Cathedral, located in the historic market town of St Albans, only 19 miles outside of London but a world away. Daniel carefully curated that first day's itinerary knowing exactly what I needed to get me into the spirit. To say we were both feeling overwhelmed would be an understatement. When you're planning a vacation, especially to a historic place, I think it's easy to just focus on the romance of it and forget the reality that modern life exists beside it. It's easy to get overwhelmed and disappointed, and that is why when you suddenly find yourself driving through a 14th century Abbey Gateway with cobblestones, down the sweetest lane- to park in front a pub called Ye Olde Fighting Cocks, you just might tear up. 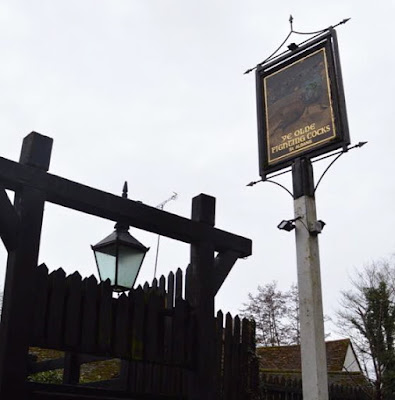 The cathedral at St Albans is huge. Not to say it's any bigger than your average cathedral but it's location really makes it stand out. We would experience this many more times on the trip- a large cathedral or castle suddenly appearing in a small village dwarfed by it's stature. I'm sure it's something I could get used to if I lived there but I definitely never got used it while I was there. The town of St Albans isn't exactly small but the cathedral is by far the largest structure, although it's somehow nestled amongst houses and we didn't actually see it until we turned a corner. At this point it was like a beacon of light welcoming we weary travelers. I was so hungry for history and a place of quiet- to really start the ball rolling on what this vacation was supposed to be about.

We parked the car down Abbey Mill Lane outside the aforementioned 11th century Ye Olde Fighting Cocks, (with the foundation dating back to 793). We walked up the charming lane to the Abbey Gatehouse and the cathedral itself. 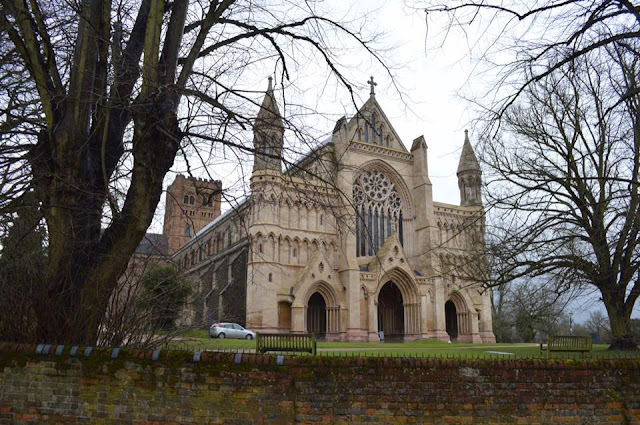 Here is where I learned some English etiquette. One does not step upon the grass. Even for a photo op, a really good photo op. It just isn't done- and you'll hear about it. I don't know if this is just at cathedrals but I stuck to it- too afraid that the ground might swallow me whole if I transgressed again.

The great part about visiting England during off season, is there are few crowds and sometimes we had places practically to ourselves. This proved to be true with St Albans. There was a small service being conducted in the Lady Chapel at the back of the cathedral and 2 people praying at the Shrine of St Alban, otherwise Daniel and I had the place mostly to ourselves. So refreshing and calming after the fuss of London. 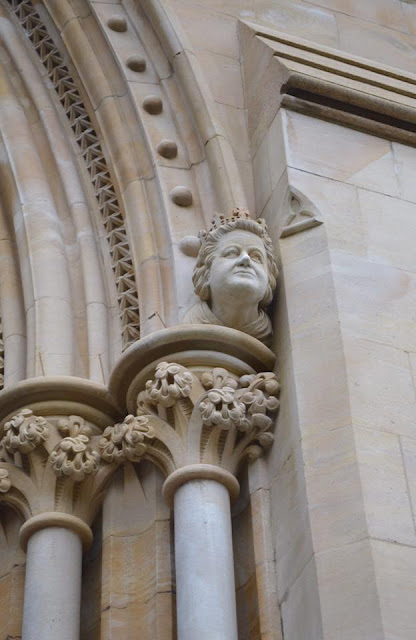 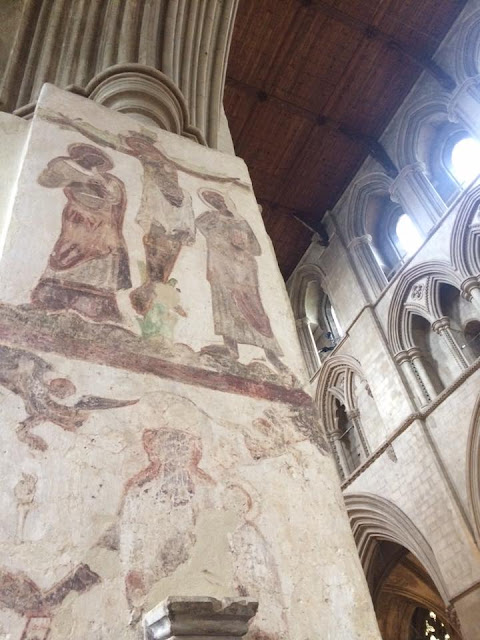 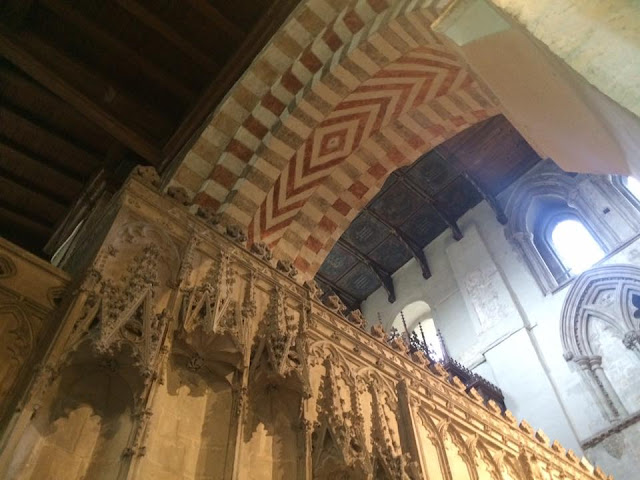 St Albans Cathedral and Abbey will always be a memorable and special place for me, and I think for my husband Daniel too. It was the first place with real meaning and changed the tone of our trip, we had a real reverence for it and that stays with you.

After spending some time in silence at St Albans shrine, admiring the mix of Romanesque and Gothic architecture, marveling at the 13th century wall paintings, and using the most serious restroom of all time (thick wooden door that closed with a satisfying thud, feet deep walls, and a heavy toilet chain that unleashed niagra falls) we set out for the seat of higher learning: Cambridge.

I'm not sure what I was expecting from Cambridge. Perhaps young scholarly types in uniforms and Professors in robes or ascot ties? For the record Cambridge delivered neither but Eton totally did- if they're keeping score Eton can add another point to it's column. What Cambridge did deliver were truly beautiful streets, lovely churches, and smart ass young men on bicycles who like to make fun of the lady taking pictures from her rental car. The streets are quite narrow in England so there are no bicycle lanes- when you are stopped at a red light bicyclists come right up the side of your car in a very narrow space and practically lean against your roof as you both wait. Imagine the awkward moment you have your window rolled completely down, with your head out the window pointing your big Nikon at a church and three young cyclists pull up beside your car and are so close they might as well be in your lap. They snickered and made some snide comments to each other about said lady in the rental car, causing her cheeks to blaze red. Oh, did I meniton I was the lady? Yeah, I rolled up that window and sat stock still staring straight ahead as the cyclists were still less than 6 inches away. 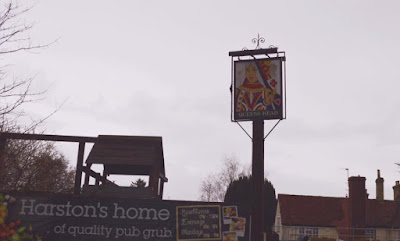 I haven't completely written off Cambridge. It was lovely but we didn't get to see much of it because our GPS chose to mislead us yet again. Perhaps it was trying to preserve what was left of my dignity? In the Battle of Meeting My Expectations, Cambridge has been docked points for the lack of smartly dressed scholars and the unruly cyclists, Eton also threw in a horse drawn carriage so Cambridge might want to further up it's game.

*more photos from this trip and specifically of the interior of St Albans Cathedral can be found on my Instagram account: cheerupoldbean