Leaving Lincolnshire we gradually made our way into Nottinghamshire and the outskirts of Sherwood Forest. I tried convincing Daniel that I needed to stop to find Robin Hood but he was not to be persuaded. Apparently there's not much to look at and we were on a mission to get to the Peak District in a timely manner so I had to content myself with seeing the edge of the forest and a few blurry pictures we took from the car.


The countryside as you transition from Nottinghamshire to Derbyshire* is gorgeous. Wild pheasants pecking away at the ground, red breasts standing out against the green fields and grey skies. I noticed the pheasants just about everywhere we went. They seemed to want to play a game of hide and seek with Daniel though. Everytime I called out, "pheasant" he would look but it would already be too late. I honestly think he didn't believe me until he finally saw one himself in North Yorkshire- I think I did a victory dance in the passenger seat that time.

The first thing I noticed as we entered Derbyshire and the outskirts of Chesterfield were hills. Not the high peaks we were headed to or the gentle hills of Lincolnshire we'd just left but the inbetween kind. The landscape was starting to resemble my home. It was familiar but so different. Charming stone cottages and pubs replaced the modern wooden or stucco homes in my mind, but I felt like it was a landscape I could find my way in. 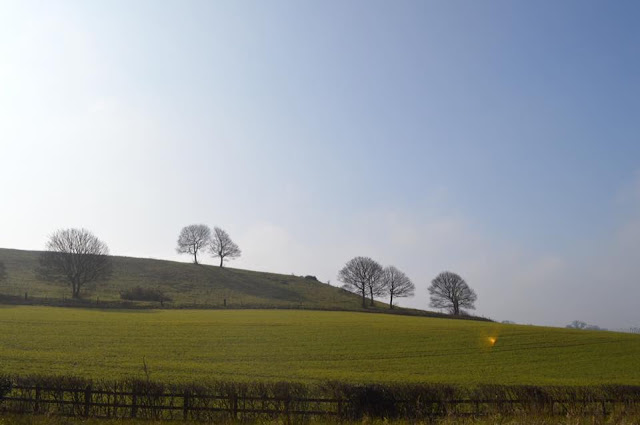 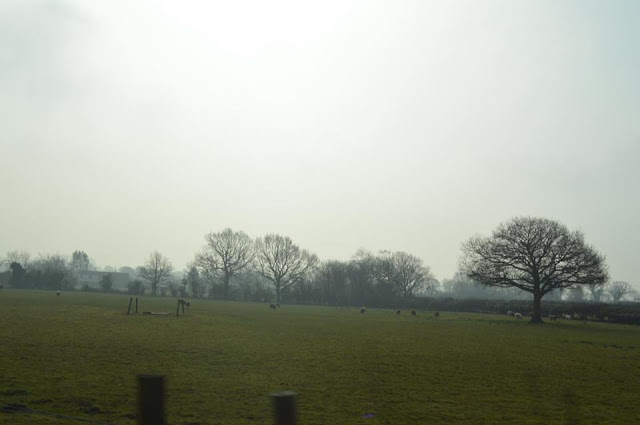 Our first stop that day was Matlock, a former spa town with a population of almost 10,000. A picturesque place that lies on the River Derwent, it tempted me to stay like a Siren. Daniel assured me that if I wanted to live here then it was definitely beyond our budget as I have expensive taste and was surely "Lady Grantham" in another life. Now, you'll think that I'm cheating on my little Lincolnshire Wolds village of Binbrook, but I assure you in my active imagination I have enough money to live in both places, so I can justify falling in love with another town/area the very next day after first giving my heart to another.

Matlock nearly became notable for all the wrong reasons. Charming, hilly Matlock almost made me a widow. I've debated sharing this story because it's in the top 4 of the worst things I've ever experienced, but I've decided to share it because it's just too fantastical not to. There are just times a higher power steps in and this is one of them.

We pulled into the railway station car park and Daniel fortuitously chose to park our rental car a few spots to the left of the wide entrance. He got out of the car to get our Pay and Display ticket while I took some time to gathered our things.  We stood chatting while we waited for the women ahead of us using the machine to finish. Out of the corner of my eye I vaguely registered that our rental car was in motion. As this was not our actual car from home it took a moment to realize what was happening. My heart dropped. Our rental car was rolling down the hill unmanned. I yelled a sentence that I can't repeat but went something like, "I say, our car is rolling down the hill!" and we sprang into action.

In an emergency situation things slow down to half time. While simultaneously sprinting as fast as my legs would carry me my brain was taking in every last detail. The car itself was moving slowly even though it was heading backwards down a hill towards a tree and a fence. I knew that the car was still unlocked and I reasoned that I could make it to the passenger door, jump in, and pull the emergency brake thus stopping the car and preventing imminent disaster. I know this is not the smartest move as I could have gotten dragged under and run over by said car but adrenaline does strange things to you. Daniel being about 7 inches taller than I am with legs much longer was able to reach the car first. I watched in horror as he ran behind the car and threw himself wholeheartedly into the task of stopping 2,400 pounds of metal (yes I looked it up) all by himself. From my vantage point he disappeared behind and under the car. I stood there planning my widowhood, deciding I'd wear black for an eternity like Queen Victoria, and wondering if he should be buried in his native country or adopted home in California? You have more time to think than you'd realize when when time stops.

All I could see were his legs from the knee down digging deep divots into the grassy area in front of the fence. The back wheels hit and jumped the curb, deeper went his knees and shins. At this point he was basically parallel with the ground below him, but I didn't know if his upper body was under the car or if he was free to move. The front wheels finally hit the curb and the car shook to a stop just before Daniel's lower body was jammed against a tree. Had he not parked to the left of the entrance there would have been nothing to stop the car from rocketing into the busy road, down another hill and into a river- so I was greatful in more ways than one that the curb was there.

At this point he literally jumped up from behind the car like a jack in the box. I'd never been so happy to see his face in all my life. Meanwhile the woman that had been at the Pay and Display machine ahead of us had apparently been right behind me the whole time. The look on her face must have mirrored my own. She looked white as a sheet and as shaky as I felt when she asked if he was okay. I'm sure she's still telling people the story of what she saw that day.

You know the feeling of wanting to both hug someone but also haul off and smack them for scaring you? Well, that was the confusing mix of feelings I was having as I did a mental check of all his appendages.  When I asked him why he'd put himself in harms way like that he answered that we hadn't gotten the full coverage insurance from the rental agency. Call me sentimental but I would rather pay for a crunched rental car than a funeral.

We spent the rest of the afternoon vacillating between being carefree tourists and traumatized survivors. Seriously, Daniel just brushed the mud off of his now ripped jeans and we went sightseeing. Our afternoon in Matlock went something like this:

Looking back we were in shock and also a bit mystified. The emergency brake had been pulled in the car, the problem apparently was it didn't catch all of the way- that is why the car rolled so slowly. It probably also explains why it didn't roll back while I was still in it. Between my weight and the brake partially engaging it had a delayed reaction. You'd better believe that we were paranoid the rest of the trip, pulling the emergency brake full force and leaving the car in gear instead of neutral.

We've often looked back on this episode and marveled at how it all occurred and thanked our lucky stars that it wasn't worse. Daniel walked away with a very badly skinned knee, his hands took a beating too, but for the most part not much worse for wear. He could have broken something or worse, and more obviously been run over by the car. Had he pulled the car straight in and parked, it almost certainly would have been hit or hit other cars in the roadway below, causing damage and possibly injuring others. We dodged more than one bullet that day.

Here's the thing, even though we had this scary experience and were quite shaken up by it, it didn't dull how beautiful the town of Matlock is. We really enjoyed strolling over Matlock Bridge, gazing at distant Riber Castle, and taking our time in Hall Leys Park. There's a lovely Victorian bandstand in the middle of the park and a boating lake teeming with ducks where we had the above conversation. We crossed over the River Derwent on a footbridge and made our way along Dale Road finding our way back to the railway station and eventually the Sainsbury's next door where we purchased first aid items for Daniel after the adrenaline wore off and he started to feel his injuries.


The railway station at Matlock, like most small towns, is absolutely charming. It looked like a movie backdrop. Next to the station is the old station house built around 1850 which was occupied by an elderly couple. We watched them garden in their impossibly sweet little yard and wondered out loud if they knew that they were living someone else's dream. If I have my way we'll return to Matlock one day. I want more than just a few hours in this inviting town, and next time we'll park on flat ground or better yet take the train. 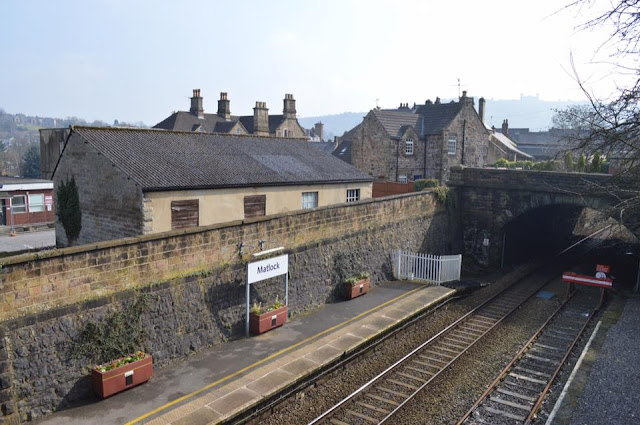 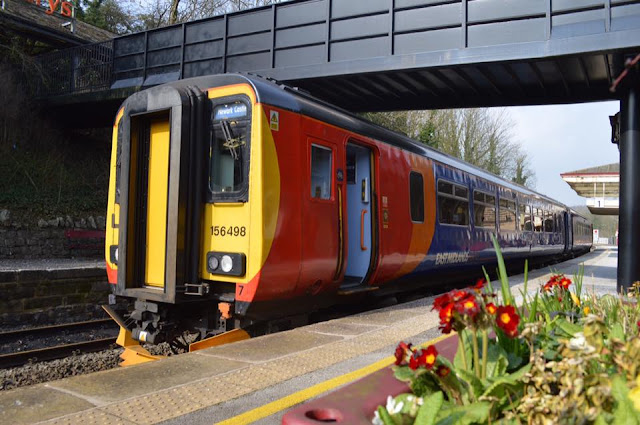 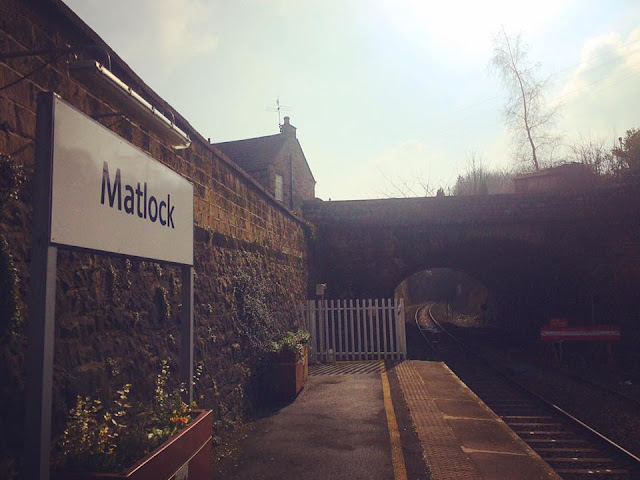 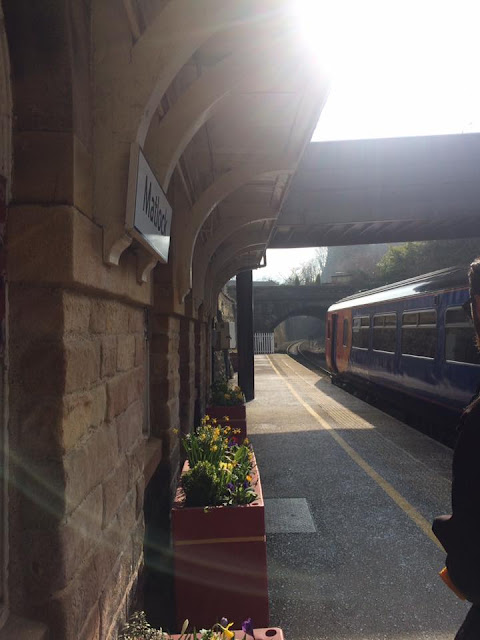