The gentle hills of the Lincolnshire Wolds captured my imagination. They captured a bit of my heart too. This was the first time on our trip where I found somewhere I really wanted to put down roots. I have an active imagination and being a passenger vs the driver meant that I could daydream all I wanted. By the time we reached Lincoln I had already created our imaginary life in the pleasingly rolling hills of the wolds, in a farmhouse, with a small flock of sheep, all within a short walking distance to a quaint village. I'd even decided which village that would be and who would be our neighbors. 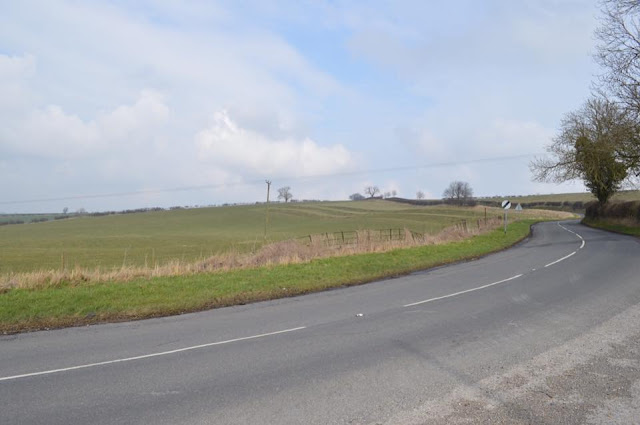 On our way to Lincoln we detoured to the medium sized village of Waltham where I had managed to trace my husband's ancestors through a list of apprentices and freeman in the year 1796, which indicated his paternal line were farmers from the village of Waltham, one of whom became an apprentice for 7 years to a filesmith in Sheffield- this man was Daniel's 4 times Great Grandfather, John. If we'd had more time I would have liked to have searched the cemeteries for John's parents but I didn't even know where to begin, so we moved on to the Waltham Windmill. 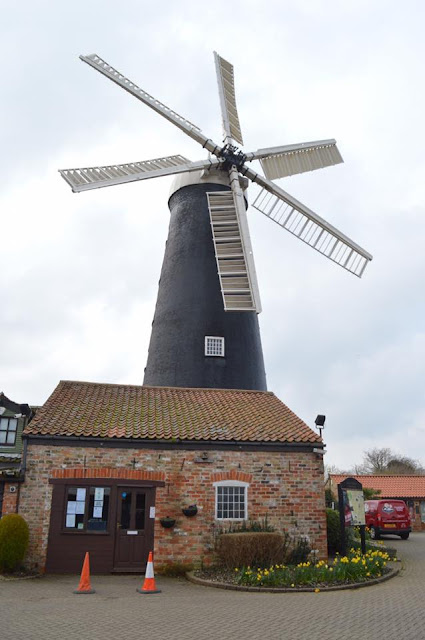 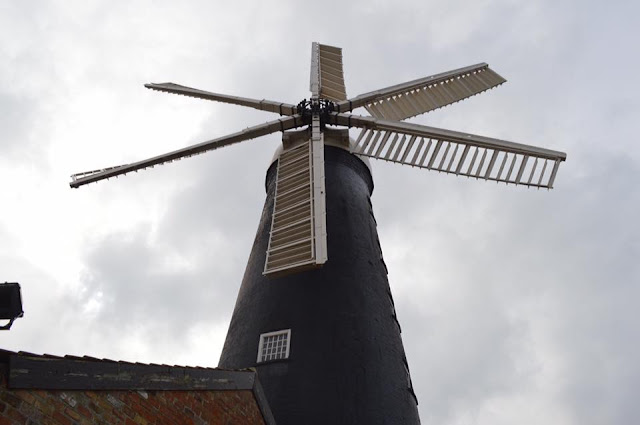 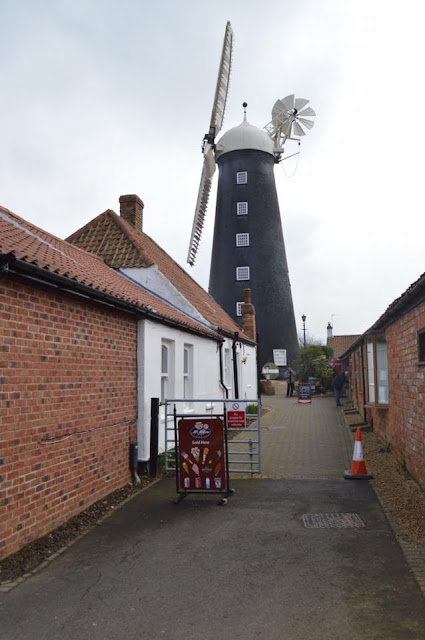 When you have a loose itinerary it frees you up to follow those awesome little brown and cream signs pointing you to something you didn't even know existed. Neither Daniel nor I knew that Waltham had a windmill, let alone the fact that it was a little tourist destination. It was actually closed but you could still walk the grounds and check out the present mill which was built in 1878. The mill narrowly escaped being demolished during World War II when it was used as a Home Guard look-out post with a view over the River Humber, because it was deemed by the RAF to be a hazard to aircraft. I, for one am glad that it wasn't- it was such a cool sight. I've never been that close to a windmill before. It's amazing how tall they really are- Waltham Windmill is 6 stories tall. According to the Waltham Windmill website the present mill is still maintained by a miller who occasionally grinds grain for flour. So cool to think it's still operational.

After the windmill we hit the road, anxious to get to the cathedral city of Lincoln our final destination for the day. Remember that village I mentioned? Well, this is when it appeared like gold glinting in a stream. We had officially entered the Lincolnshire Wolds an AONB* designated area on the B1203 on gently winding roads and even gentler hills. I remember seeing the village of Binbrook like a scene in a movie. I've checked with Daniel to make sure I'm remembering it correctly and not making it more cinematic for drama's sake- he assures me that he remembers it the same as I. Down a road and around a bend in a valley the village sits. I think the word nestled was invented to describe Binbrook. For it truly is nestled in this little valley surrounded by rolling farmland. It's positively pastoral, a storybook village. We came upon an entrance to a farm just outside the village- an ideal spot to stop for a moment- with colorful bag upon bag of what turned out to be horse manure for 50p (70 cents) a bag, on the honor system. Then and there I decided these were my new neighbors. I found out upon further obsessive research that night from our hotel in Lincoln that the village lacks a tearoom- if you've been following my Instagram you might have noticed that I've been trying to perfect my traditional English pastries and cakes- coincidence? I'll let you be the judge. But if I suddenly go missing I've now given you a clue as to where to find me. 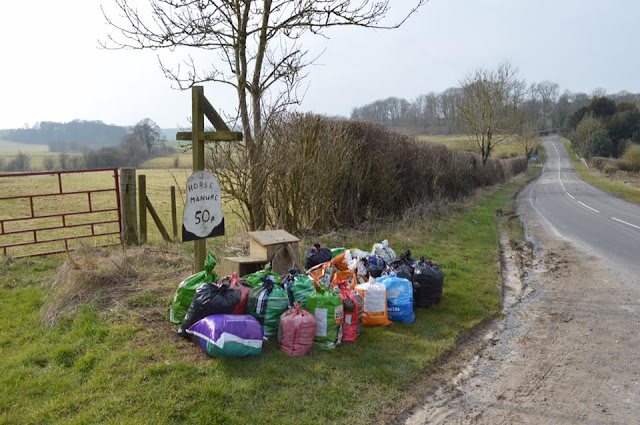 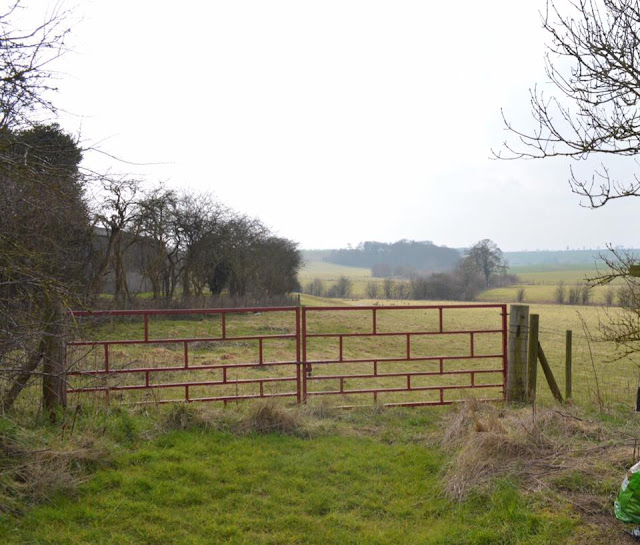 You'll be wondering where all the photos of this little gem of a village are. Well, sadly I didn't get any. Honestly I was too busy writing it's name down and taking it all in that by the time I remembered to get the camera out we had already left the small village. I'm seriously disappointed that I didn't get any. I checked the camera later that night thinking that I had and couldn't believe I didn't get a single one of the village itself. Below is the only photo I could find on Google search of Binbrook that fits closest to what I remember- although we approached the village from a different direction than the photo below.

The rest of the drive to Lincoln was a blur. In what was becoming a common theme we found parking in the city centre a challenge. We followed signs but they led us astray and somehow we ended up in coach (bus) parking, in an area restricted to cars. We were basically driving on cathedral grounds and could see our intended destination through an archway but could find no obvious way to get there. Somehow we lucked out and literally stumbled upon a parking space on the street right next to the cathedral that was free! I don't even know how that happened. We read the sign a few times to make sure we weren't missing vital information but it really was free 2 hour parking.

Lincoln Cathedral is beautiful. It dominates the city centre. We approached it from Eastgate where a large bronze statue of my favorite poet, Alfred Lord Tennyson, stands. I have been to Lincoln Cathedral before and never saw the statue. We arrived in Lincoln by train the first time I visited which means we approached the cathedral from a very different direction, to be honest that was a much better way to see the city. In fact this time I was really perplexed that Lincoln was nothing like I remembered. It was only when we left the cathedral and entered Castle Square that I was able to get my bearings and recognized the city I'd visited 12 years earlier. Lincoln Cathedral and Lincoln Castle are located opposite each other on Castle Hill. As you wander down the narrow lane called Steep Hill, which should tell you all you need to know, you find yourself walking passed tea rooms, independent shops, restaurants and pubs. It's charming, everything you would imagine an English town to look like. If you ever find yourself in Lincoln, and I recommend you do, do your best to approach the cathedral and castle from the High Street where you can cross the beautiful River Witham- which may be home to some of the Queen's swans if you're lucky- and walk up Steep Hill. It's picturesque. I wish we'd revisited this approach but I would have missed the Tennyson statue again so it's a fair trade off. 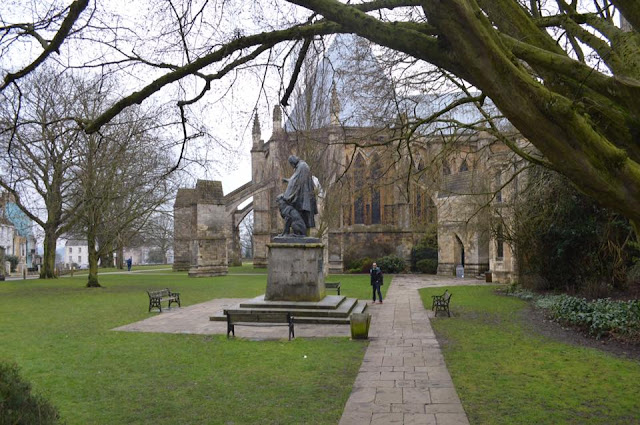 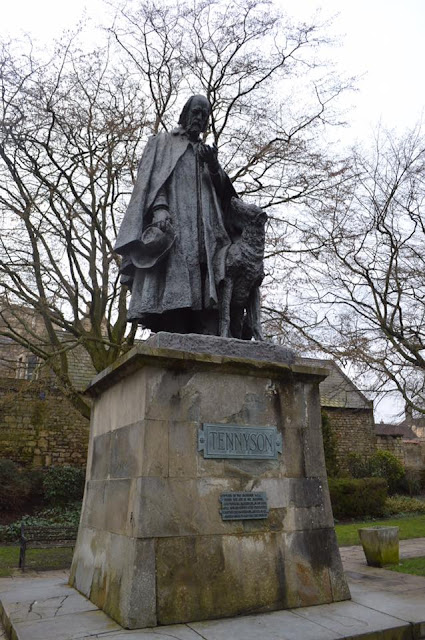 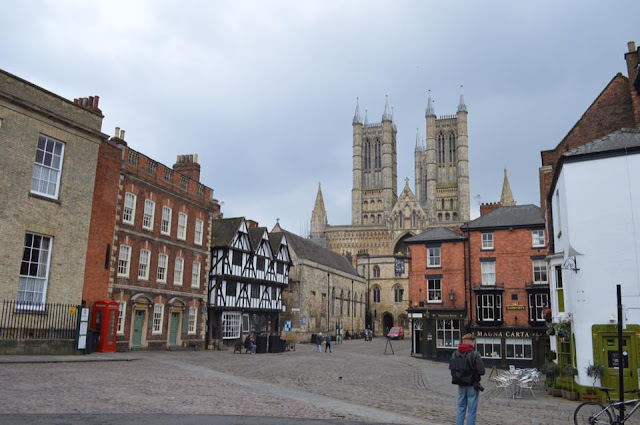 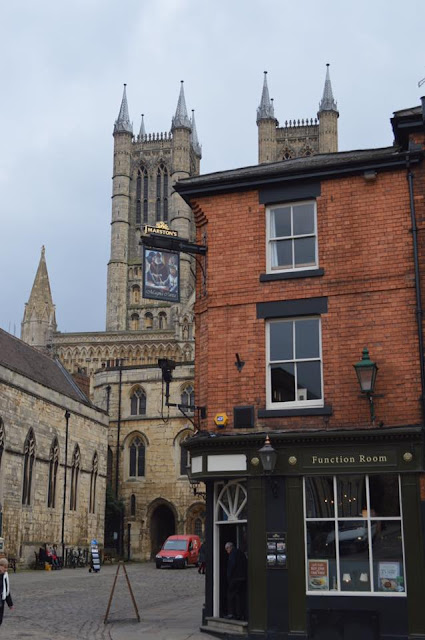 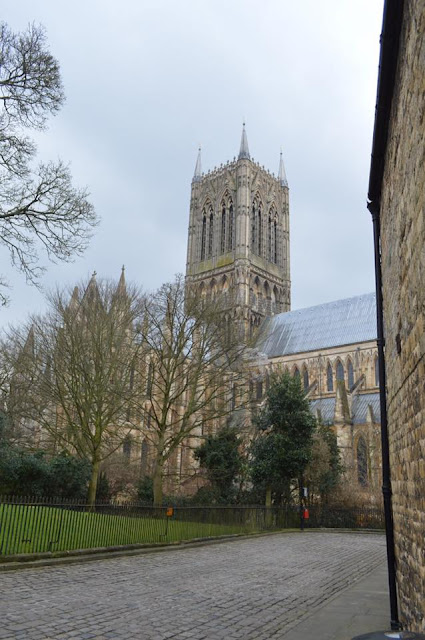 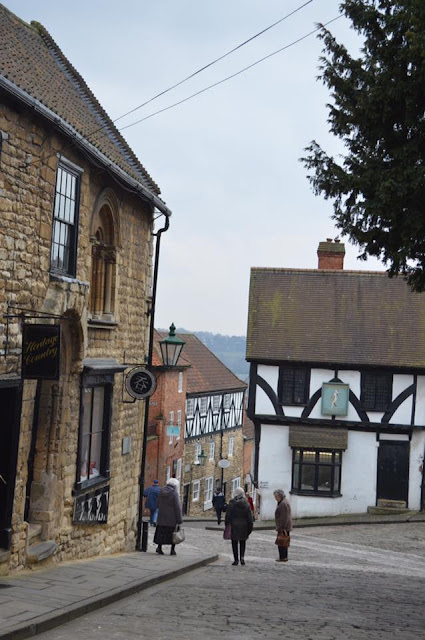 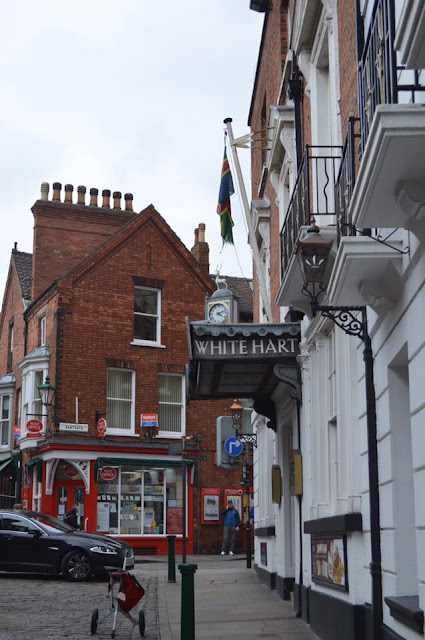 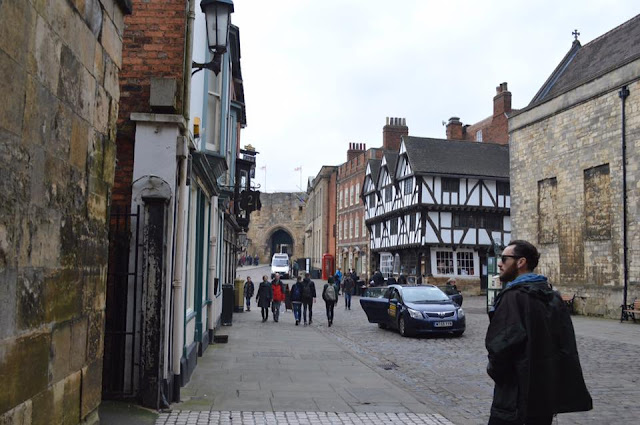 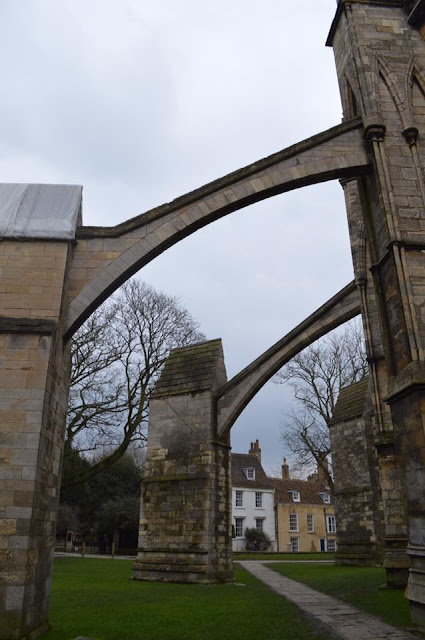 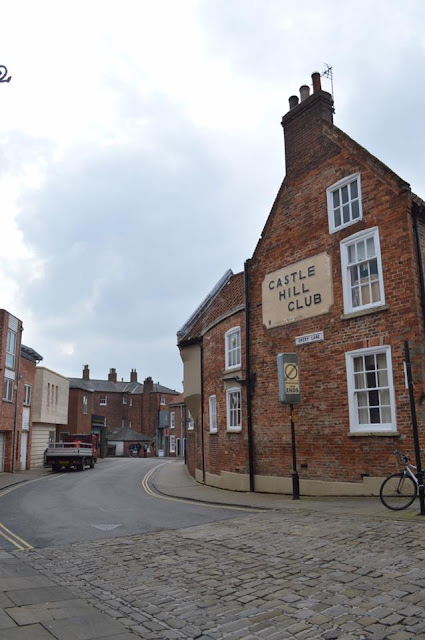 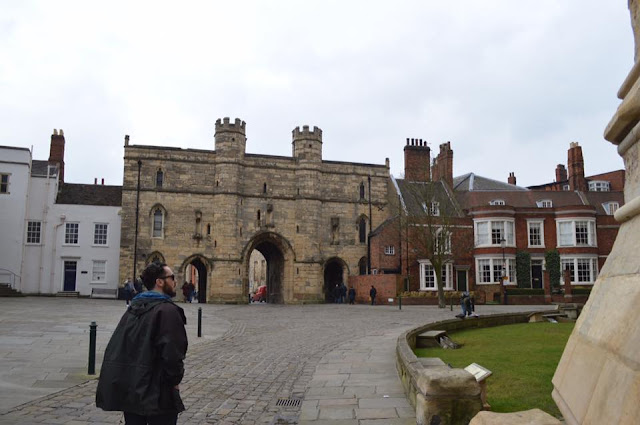 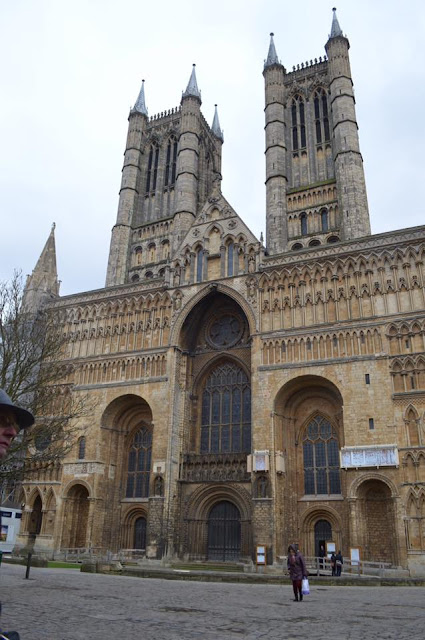 Here is where I'd like to insert a little PSA (Public Service Announcement for my friends across the pond) about the dangers of being hungry. The first time I visited Lincoln I was absolutely starving. I don't do well with being hungry. I get moody, like really moody. So I found myself incredibly underwhelmed by Lincoln, which confused Daniel greatly as it's the kind of place I should have lost my mind over. Fortunately this time I arrived with a full belly and finally 12 long years overdue saw Lincoln the way I should have seen it originally, with wide eyes and appreciation.

*AONB= Area of Outstanding Natural Beauty: According to Wikipedia AONB is an area of countryside in England, Wales or Nothern Ireland which has been designated for conservation due to its significant landscape value. AONB enjoy levels of protection from development similar to UK national parks.