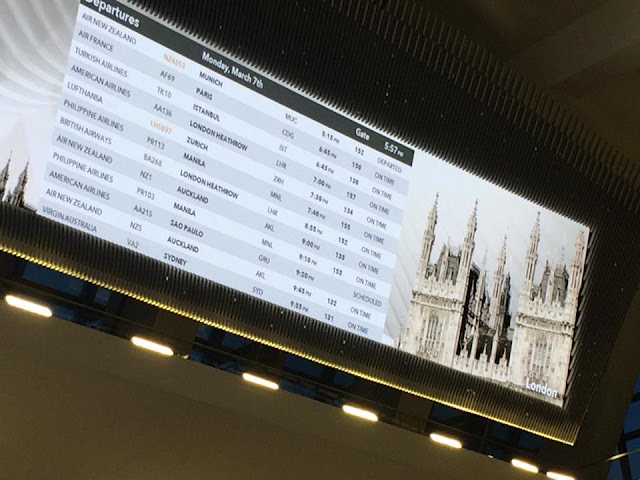 It's not every day that you are hanging out at LAX waiting for a flight to London, so that in itself made the day unique, but what takes a slightly above average day to a "Whoa, wasn't expecting that" kind of a day? An Oscar winning actress brushing your arm as she rushes by you with 3 of her 6 children and boarding your plane. I had been joking with Daniel earlier that day that Angelina Jolie might be on our flight because Brad Pitt is currently filming a movie in London, but I honestly didn't believe it, so I'm either accidentally psychic or she also prefers a night flight on a Monday night to get the best fare.

Not 20 minutes earlier a British Airways employee announced over the intercom at our gate to please clear the walkway as the first class passengers were on their way from the lounge. I found this announcement incredibly odd as I've never had anything like that happen on previous flights. Never have I been repeatedly told that the first class passengers were on their way- was I supposed to roll out a red carpet, avert my eyes, or get my moist wipes out and sanitize a chair for them? I mean, seriously, what was the purpose of this announcement? It felt weird at the time and Daniel and I definitely traded barbs about it, and then he says "That's Gordon Brown". Sure enough the former British Prime Minister was making his way to the counter of our gate, shaking hands with BA employees before disappearing up the stairs to second floor of our huge plane. Ah ha! So all of that was for a politician in a bespoke suit? Alas Gordon Brown, I'd say you were just a clever smoke screen for the real reason those announcements were made.

Everyone was so involved in their own business and thinking the hubbub was over that Angelina went unrecognized and seemingly unnoticed by everyone but me. I might have missed her myself if she hadn't brushed up against my arm causing me to look up. This is partially the reason I have no photographic evidence of this encounter. I was in the act of putting my phone away and fastening my purse closed when I felt and heard someone brush against the sleeve of my coat. I knew it wasn't Daniel, as he had left not a minute earlier to use the restroom. I was in utter shock when I looked up and there not 1 foot away from me was Angelina in big, dark glasses, hair slicked back in a pony tail, looking ridiculously elegant and effortless in all black. You could tell how stressed and anxious she was by her body language and the way she hustled and herded her kids through the gate. She was focused on getting on the plane without being recognized and mobbed. This is honestly why I didn't immediately fish my phone back out and start taking pictures. It didn't feel right- it felt invasive and disrespectful. I did however, immediately get on Facebook and put it on blast because she would never know and she was already safely ensconced in first class by that point.

Daniel chose this moment to return from the bathroom and I excitedly told him what had just happened. His response? "Who?" So I sent a quick text message to my friend Coral, who thankfully had the correct, in all caps response that I was looking for! Validation! Thank you Coral!

You know the weirdest thing about the whole situation? Knowing Angelina Jolie was on the plane had a very calming effect on me. I'm a nervous flier, super jumpy about take off and landing and any kind of turbulence inbetween but this time around I kept thinking to myself, "Angeline Jolie is on this plane too and God wants Angelina to live!" also, "There is no way this pilot wants to go down in history as being the one who killed Angelina Jolie, so I'm safe." Honestly you guys, I really did think those things- repeatedly, like any time there was a slight bump in the road. She was like an angel on the second floor  above me, oblivious to the fact that to someone in steerage she was a good luck talisman.

We didn't cross paths again and we probably never will- and that's okay with me. I will always remember this encounter and experience as more than just a really awesome celebrity sighting. For that one 10 hour period Angelina Jolie personally provided me with some much needed focus and peace of mind. Best flight I've ever had, turbulence and all.