This post could also have been titled: That Time I Poked Someone In The Eye With An Umbrella. I'd like to blame this faux pas on the fact that I'm a Californian that hasn't seen rain for what feels like decades and therefore an umbrella is a foreign object that apparently I don't know how to operate- but alas I can only blame it on being an oblivious tourist. The kind you secretly send mental daggers at when you're walking behind them as they walk achingly slow, staring up up at the buildings or trying to read street names heedless of the locals trying desperately to get past them. And here's the real kicker- the gentleman who was on the receiving end didn't even react. I quickly apologized and he just kept walking like absolutely nothing had happened. Daniel did tell me that the English don't complain, but this was kind of taking it to another level! So to the older gentleman who might now be wearing an eye patch, I really am sorry! I took my umbrella weilding way more seriously after that.

I should mention that we were now in a great little city called Ely (still day 1). I really want to come back and experience it on a warm, clear day because I imagine it's just gorgeous. Ely is a cathedral city located in The Fens, a marshy region of England that have been mostly drained and is now used for agriculture.  It's a fascinating area with canals and rivers, most of it only a few meters above sea level. There are windmills (for drainage) and colorful canal boats called narrowboats. I had heard of The Fens or Fenland but all I knew of it were people living in narrowboats and eels- lots of eels: pickled, smoked, and even used as currency. Basically I knew of the medieval fens and not modern life. 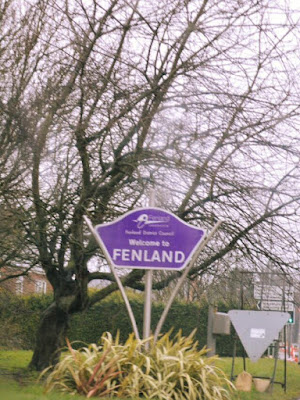 Ely actually means "Isle of Eels", while not an actual island Ely and it's cathedral are located on one of the fen-islands (Kimmeridge Clay island), higher ground that became an island when the fens below were flooded. It was put on the map when Etheldreda founded an abbey at Ely in 673, construction on the current cathedral was started in 1083 which sounds positively brand new in comparison.

In doing more research now that I'm back in California I'm realizing how much we missed while in Ely. This is one of the downsides to spontaneous travel and following your nose- you aren't completely versed in the history and wonder of some of the places you roll into. Lesson learned. We will be back to to lovely Ely for sure. 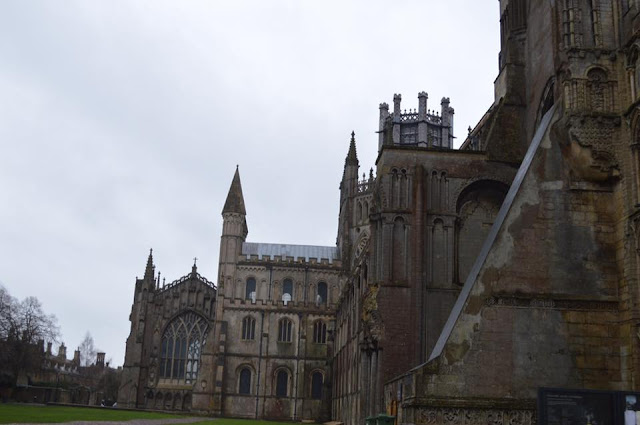 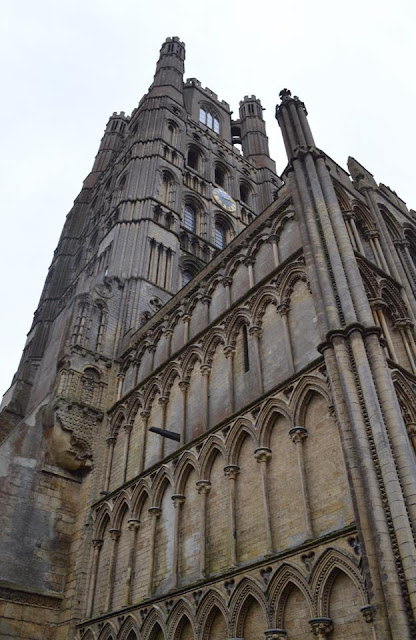 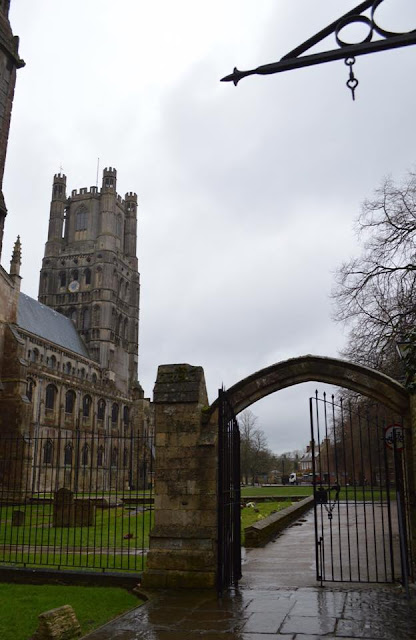 Parking is an issue in England- there just isn't enough space. We experienced this time and time again. I can't imagine how awful it must be in peak tourist season. Our first real experience of this was in Ely. We pulled into town and could see the glorious cathedral towering to the right in the distance. We saw signs for "cathedral parking" and dutifully followed them... to one full parking lot after another. Every single public or city centre car park was full. To the brim. I mean multiple cars circling just waiting for someone to finally vacate their spot. I can't tell you how many times we circled the city centre of Ely hoping that a space would magically appear in a lot we had left 5 minutes earlier. In desperation we ended up parking in a grocery store car park. To be fair it didn't say we couldn't park there and it had a limit of 3 hours, which sounds like an awfully long time to be grocery shopping.

We strolled through The Cloisters shopping centre with lovely shops and a really nice Starbucks which was so very welcome as we were desperately in need of free wifi. I try not to be one of those tourists that travels abroad and only frequents American restaurants or coffee chains but there are just times that you have to forego the authentic experience and go with convenience- which to me means guaranteed toilets and free wifi.

We made our first mistake of the trip while we were in Ely. We chose not to tour the cathedral. Why you might ask? Because it was expensive. We had our entire trip ahead of us and I was unsure of how much we could really afford to spend at that time. I understand that it is very costly to keep cathedrals open and kept in good condition, every cathedral we went into had a plaque telling you how much it costs per day to keep it open, but at £8 ($12) per person for general admission and a guided tour (or £15 ($21) per person for the tour we wanted which included the Octagon tower) that was over our budget. Looking back I wish we had spent the money. It's a cathedral steeped in amazing history and most likely worth the admission fee. We have definitely decided to include Ely on any future trip we might take so I feel confident that I will see what we missed this time.
We did however go into the Refectory Cafe in the cathedral. Here's something you should know about me: I am a coffee drinker. I'm a coffee drinker who usually only drinks tea when I'm sick: peppermint, ginger, the ocassional chai. I want to like tea. I'm married to an Englishman, therefore I should love the stuff, but it took me over 35 years and a two week holiday to the UK to finally introduce me to the right cuppa. Ely Cathedral provided me with the cuppa that changed the coffee drinker in me. It won me over with it's milky sweetness, in a dainty cup and a wee spoon. I think I might have been waiting my entire life for that.

After a quick round of, "Where are we sleeping tonight?", we decided to hit the road and see how far we could drive before it got dark. The ultimate goal was a seaside town called Skegness that Daniel was familiar with from childhood where he knew we would find an abundance of cheap hotels, guesthouses, and B&Bs thereby guaranteeing we would not be sleeping in the rental car.

Along the way we wound through the unique farmland of the fens from Cambridgeshire to Lincolnshire. Though the land is flat the roads are not straight, which made for some tense moments as the roads are narrow and raised with water filled ditches much like the irrigation ditches of the California Central Valley and absolutely no barriers or shoulders. One false move and you were liable to find yourself drowning in only a few feet of water. Out of curiosity I checked to see the number of fatalities on that road and while I couldn't find a definite number I did find that the Automobile Association rates it as a medium-high risk road and in 2006 was on the list of the Most Dangerous Roads in Britain. So all of that squeezing of the door handle was not just me being a whimp.

The rest of that day is a bit of a whirlwind as we were trying to beat the clock and the sun at this point. We drove through so many places that the names are a blur, but I do remember Wisbech ("Capital of the Fens") and Boston, as in the Boston that our US city is named after. Boston is the port where William Brewster and William Bradford (more on William Brewster later- he kept popping up!)  set sail for the Netherlands to escape the pressure to conform to the English church. These two men would later become part of the original group of pilgrims to sail on the Mayflower and found Plymouth Colony. I didn't expect to experience US history while on this trip so that was a cool surprise. 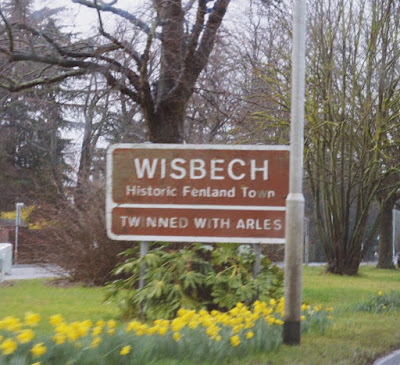 We finally found our way to Skegness and a cheap, but clean hotel called The Crown Hotel (not to be confused with the other Crown hotels that we stayed at later- popular name!) Other than the ancient lift that we thought was broken because it was going so slow, it was a lovely hotel in a convenient location with a large car park. The perfect place to rest our weary and over-traveled bones. (For a full review of the hotel see my trip advisor review) 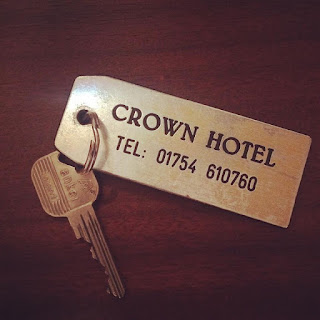 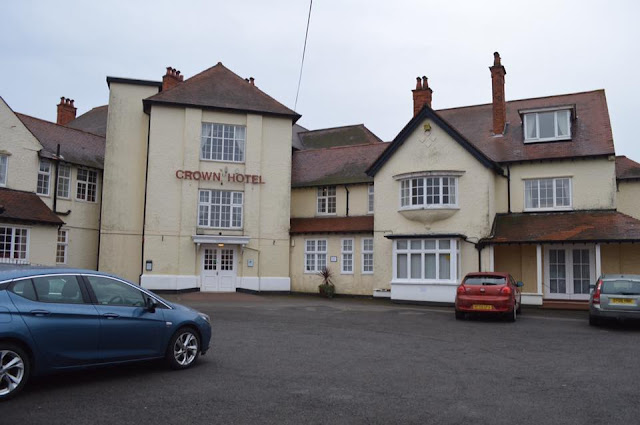