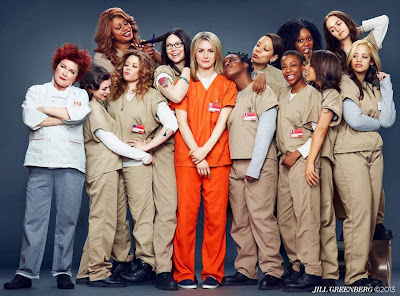 I started this post all the way back in August and then got distracted by life and never finished it. I couldn't just let it linger in the "drafts" pile, so I thought it was high time that I got to finishing this post, even though the whole Western world has already probably watched it and has learned for themselves why I call this show my latest obsession. (okay my August obsession, but it was current when I started writing this.)

You couldn't help but be bombarded with advertisements for Orange is the New Black if you are a Netflix member- they were pushing that show left and right and I just ignored it. The images were intriguing but I didn't feel like getting into a prison drama or dramedy or whatever they were calling it. Then my cousin texted me and convinced me that it was all that and a bag of chips! (okay not her words and I'm pretty sure she's hiding in shame right now, sorry cousin).  I took her advice and never looked back! I just love this show. There's enough humor in it to keep it from getting depressing but also some story-lines that fall into the "serious" category to keep you from getting bored. I enjoyed it so much that I immediately went out and bought the book that the series is loosely based on. I said loosely my friends- the REAL story isn't quite as dramatic but is just as interesting. The real Piper is far more relatable and less annoying. The fictional Piper sometimes bugs me with her indecisiveness when it comes to people and relationships. Sometimes I just want to shake the fictional Piper.

One of the things I enjoy most about Orange is the New Black is the fact that it's an ensemble cast- each and every character is interesting, though some more than others. I love nothing better than to get the backstories of each inmate, to find out exactly what they did to get themselves in a Federal Penitentiary. Tell me, who else is anxiously awaiting the back story of Crazy Eyes and Big Boo?! Did anyone else get a whole new respect for Red when she popped the mobster wife's implants? I won't say more tempted as I may be, in the event that any of you have not had a chance to watch but I will finish with this, you're going to find a character that you love, one that you root for and you're going to find one or two that you wish would do their time and depart. I'm anxiously awaiting the shows return for Season Two, which rumor has it is being filmed while I type. I'm hoping for an early 2014 release which would round out my trifecta nicely, Downtown Abbey, Call The Midwife and Orange is the New Black- what more does a girl need?