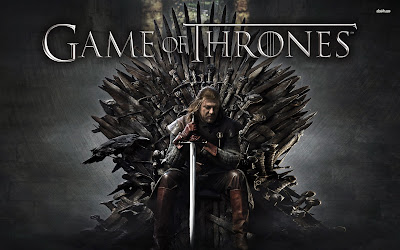 Holy moly my friends, I've jumped on the bandwagon! I wasn't sure if I wanted to start reading the books or getting into the HBO series because I just knew that I would love it. I know that sounds odd, you know you'll love it so you avoid it, but the reason for that logic was that I didn't want to get lost in it and devote all of my time to it. I just knew it would become an obsession. Well it has dear reader. I can now say with confidence that not only do I love the HBO series but I am loving the books as well.

It all happened one weekend when I knew that my husband would be working a lot and I'd have a lot of alone time on my hands. I wasn't sure he'd want to watch it so I thought I'd test the waters and then report back to him whether he would like it too. It all started very innocently with buying the first episode on iTunes. I did this while my husband was at home. I watched it with headphones on, so as to not disturb him while he was busy, and just lost myself. I'm pretty sure I made noises while I watched it. I finished that hour and half episode being both excited and disappointed. Excited that it was just as good as I was hoping and disappointed that it was over! I told myself that I could only download that first episode because I had decided to buy the whole season on DVD- I didn't want to waste my money by essentially paying for the same thing twice. I caved my friends- I'm ashamed to admit I downloaded and watched the first 3 episodes, even after I'd purchased the DVD's which I was impatiently waiting for from Amazon. Fortunately the shipping was quick because I might have done even further damage and downloaded more.

When those DVDs arrived we wasted no time in starting from the beginning so my husband could get caught up. They're so good that I wasn't even annoyed to be watching three episodes I'd already seen. We made our way through that first season like lightening. I promptly went to Target like a drug addict to buy the second season at any cost, the day before we finished our last episode. Couldn't have any lag time, could we?!


Season one was superb, and season two was excellent. Season two introduces some new characters, but it also takes away some old favorites. I suppose you have to keep the story fresh, but I'll admit I was really saddened to see some characters go. There are just some that you want to see make it through the duration- and some who maddeningly seem to just stick around when you want to just yell, "Can't you just die?" at the TV screen. (those who watch the show know exactly who I'm talking about- I'm talking to you, you fair haired tyrant!)

Now, a word to the wise. This series is boobtastic, as we say in my house. It's definitely marketed towards teenage boys and well, men, just men in general. There is a lot of nakedness and "meetings" that take place in brothels with sexy time just happening in the background. There is also graphic violence. If a man is gutted, well you see his entrails. If a man looses his head, there is no mystery there.  I am not the least big squeamish about that stuff so honestly it doesn't bother me, but those with a delicate stomach may just close their eyes a lot. The one thing I can say about HBO, they spare no expense, which is awesome, especially when something like dragons come on the scene- you don't want crappy special effects with dragons.

I'm not lucky enough to be able to watch the series in "real" time. We do not have cable so therefore we don't actually have HBO, we have to catch everything after it's come out on DVD. After we finished season two we found to our great disappointment that season three doesn't come out until February. That's not that far away we reasoned and then we panicked! That is next year! Sooooooo enter the box set of books by George R.R. Martin. We just couldn't help ourselves- we had to know what was going to happen! We started with book one which of course is, A Game Of Thrones to make sure we didn't miss anything- in the event that the series differs from the books. It does slightly but so far I have to say the tv series is staying pretty faithful. There is a slight advantage to watching the tv series before reading the books and that is the fact that this story is heavy on characters. There are a lot of names to remember and these names are spelled funny and can be really hard to pronounce. My advice if you read the books first is to refer to THIS pronunciation guide. You'll be glad that you did.

Now we are set to embark on A Song of Ice and Fire ( the official name for the book series), excited by what will unfold. It's so hard not to skip ahead to where the HBO series left off, I sooooo very much want to know what will happen but we will remain patient and read through the books in order, promising one another that when we finally get to the new parts of the story we will do our very best not to spoil it for the other. It's going to be hard my friends- just as it is hard for me not to wax on and on about this character and that character, this plot line and that plot line- I promise no spoilers, as the best part is having it unfold with no prior knowledge.

If you're already on this ride or you jump on after reading this, let your inner geek come out and then find me because I've let my geek flag fly and I'm ready to talk about it!

** Update, my good friend Niki took pity on me and I have now caught up on Season 3 on HBO Go. Thanks for looking out for me, my friend!!! Game of Thrones nerds unite!!