Ireland Getaway Post 5- A Night In, Galway, and Rushing Rivers

Here's the thing about the cottage that we rented: it was isolated, but not in a boring way more of a peaceful-shut-the-world-out kind of way. There were no street lights or close neighbors, just rolling hills, some horses, chickens and dogs. The people who own the cottage do live right next door and really close, I might add, but the cottage was situated in such a way that you couldn't tell, so we never saw their lights or heard noises, for all we knew we were alone on an Irish hill in a tiny village.

I found this cottage on Trip Advisor after my husband found out that they do vacation rentals. I searched the towns that we thought we might want to stay in, that were centrally located for easy day trips and waited to see what rentals came up. The first cottage that popped up was in Birr, County Offaly. I fell in love, I mean that little house was where I wanted to be! It was precious. A perfect whitewashed cottage with a bright red door. I quickly put in my inquiry and anxiously waited for confirmation of our reservation. Days went by and then weeks. It became clear that I needed a back up plan, clearly this cottage was not going to come through in time. So with lots of disappointment I broadened my horizons. I contacted another cottage in Terryglass, County Tipperary. Same story. Okay back to square one. Maybe we didn't need to stay centrally located, maybe we would just have to settle wherever we got an answer. That is when this gem, just on the edge of the Wicklow Mountains came to our attention. It was just the right size, the right price and more importantly they actually answered us! So we had to change our plans a little bit- staying in County Wicklow put us a little farther away from some of our day trip destinations but a lot closer to others. We knew we could make do with it.

The great thing about doing a vacation rental versus a B&B or hotel is being able to cook your own food, walk around barefoot in your pj's, and have total privacy. This cottage had a wonderful wood burning stove in the corner and we were provided with plenty of peat logs to burn. It also had geothermal heated floors- fancy pants!

Cooking at the cottage required some creativity though. This is where things can get tricky, it's a kitchen you don't know, with appliances that you're unfamiliar with and utensils that are either not there or not exactly what you're used it. We are big fans of roasted veggies in our house, so our plan was to just make a big pan of roasted veggies and go to town. I got to chopping and prepping veggies while also preheating the stove. Well my friends, this stove was unlike any I've seen in the States. It was confusing, I had no idea what to press or how to even know which temperature it was set at and to top it off I couldn't get it to actually turn on! I bit my lip, wrung my hands, stared at the pile of chopped veggies and then it dawned on me! The outlets (and also appliances apparently) had on-off switches. There was literally no power going to the stove. So, I turned it "on" and holy moly- it started beeping and lights were flashing on the digital display that should not have been flashing. I panicked, turned it off and just sat down. Now what was I to do with my pile of chopped and very raw veggies? Plan B. I grabbed a frying pan and some butter. At home I cook with olive oil, there are times when I don't even have butter in the house, so it was a bit painful for me to grab that pat of butter but really there was no alternative. I pre-cooked the veggies in the microwave because I knew they would take forever in the frying pan and threw them in the sinful melted butter. This my friends is when I discovered that there were NO lids in the joint. Not a one.

Well, that roasting pan came in handy after all. I flipped it over, stuck it over the frying pan and crossed my fingers that it would do the job.

Our first real night in was lovely. We had a peat fire roaring, and I had a good book to read. The great thing about being in a colder climate is the fact that they definitely know how to heat their homes efficiently. I was so excited to be toasty enough to wear a t-shirt! All of that bundling up had left this Californian feeling claustrophobic.


After a wonderful night in the cozy cottage, we got up early once again. This time to head out for Galway. Galway was one of my very favorite places from my first trip to Ireland. With a population of around 75.000 it is large enough to have great amenities but not so large that it's overwhelming. My favorite part is the city centre and the pedestrian shopping area. Unfortunately for us the weather was awful that day. It was awful country wide but especially on the west coast where Galway is located. I had reservations the whole drive there- Galway had been my idea and it was the farthest in terms of driving distance of all of our day trips, so it was a big commitment in terms of time. We gave up going to Waterford because of my desire to see Galway again. If I could do it all over again I would have chosen Waterford instead, but that does not mean that Galway isn't still a wonderful place. But for me it was better left in my memory when it was good weather and cheerful. We got soaked to the bone and were uncomfortable the whole time. It just makes you grumpy and certainly doesn't put you in the mood to walk the pedestrian shopping area. It just makes you want to jump back in the car for better climes. I do feel that it was a bit a wasted day, and if I'm perfectly honest I regret it, but what can you do when it's already done? My advice: do not miss Galway in spring, summer or early fall, but if you're in Ireland in winter give it a pass.


The one thing I don't regret seeing? Watching the swollen River Corrib flow through the city and out to sea. For those of you following along you'll have read THIS POST talking about the crazy weather that Ireland had just before we arrived. Flooding and gale force winds for days on end. The flowing river was definitely evidence of this heavy rain. In fact it was raining heavily and was quite windy the day that we were there, although the photos don't show that clearly for some reason. We got to watch a rescue crew doing drills in and around the river, clearly wanting to be ready in case of emergency. It was fascinating to watch them try to navigate the fast moving water themselves.

After watching the water flow, we walked to the Galway Cathedral to get dry and view the beautiful stained glass. I felt so guilty because I was smack dab in the middle of my awful cold, so I was coughing a lot and loudly, which just doesn't seem appropriate in the quiet sanctity of a church. 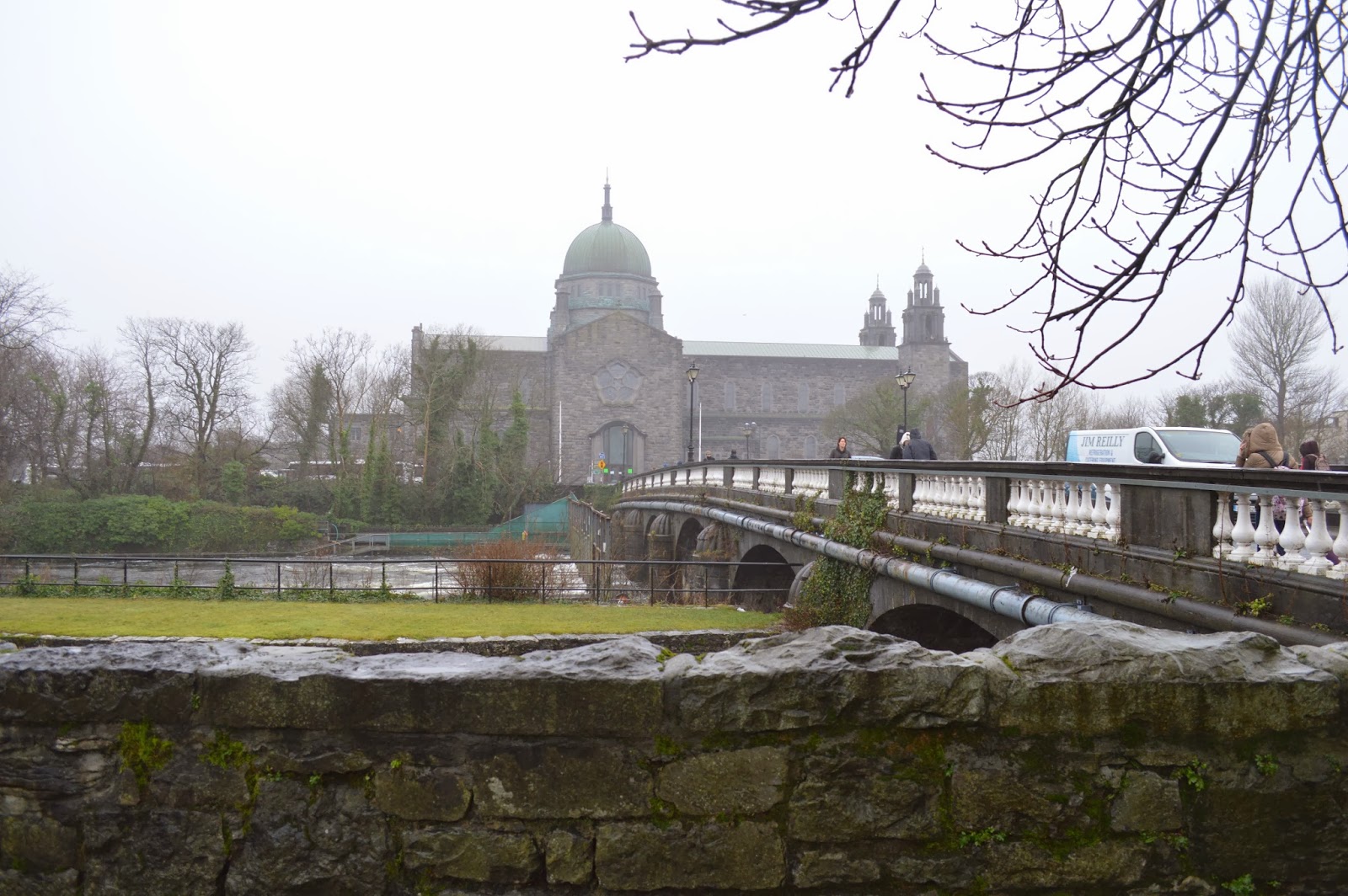 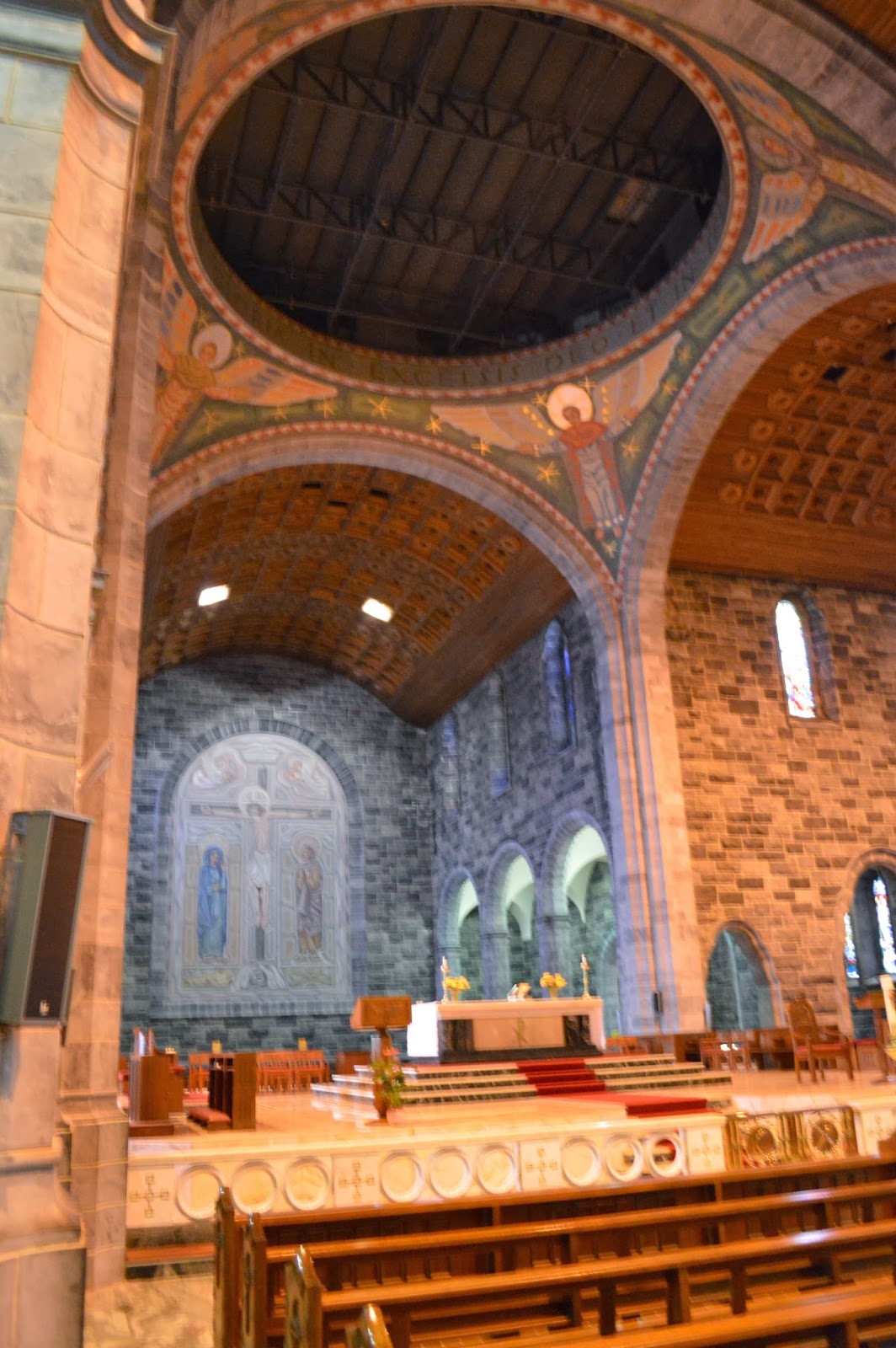 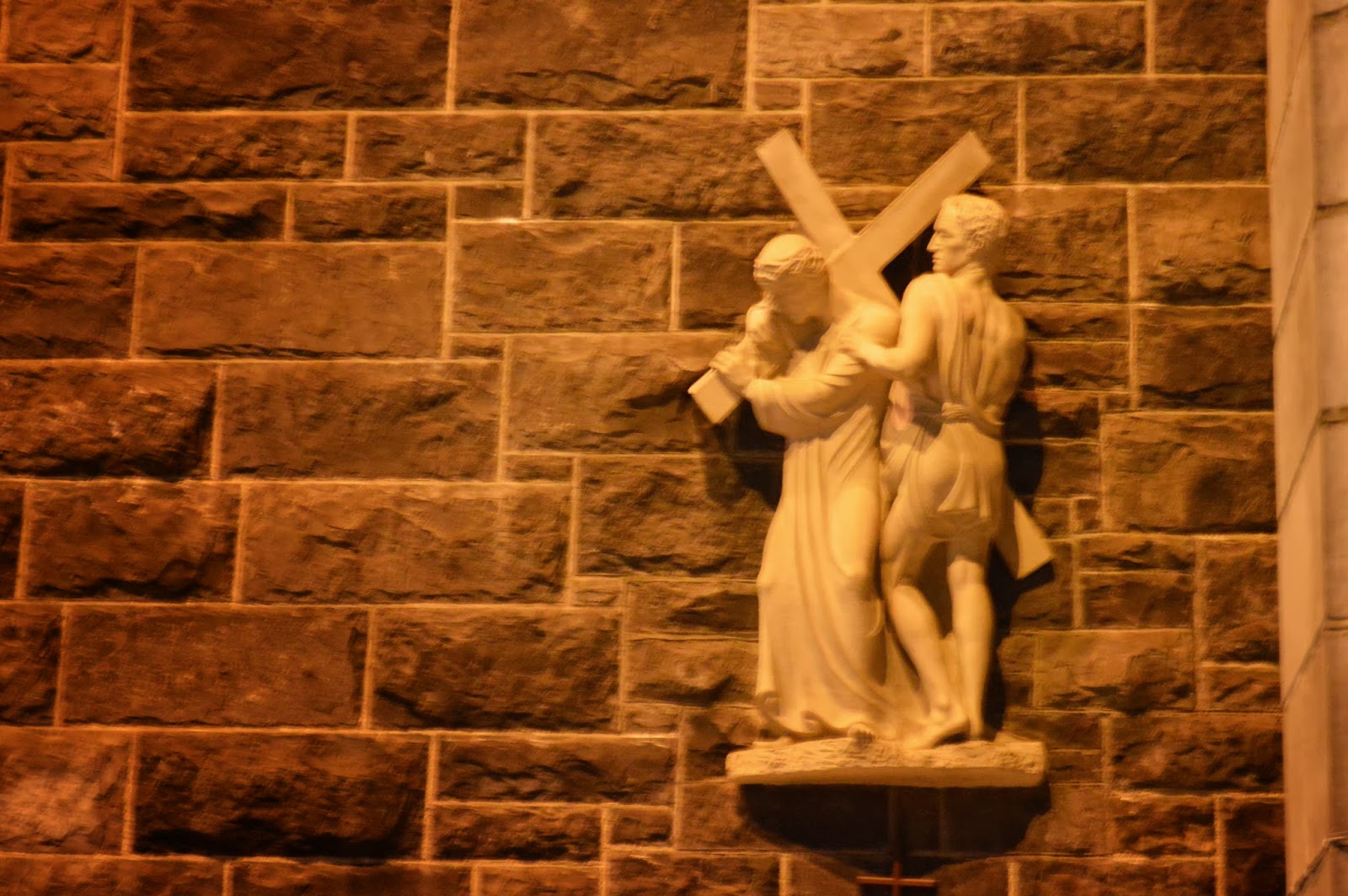 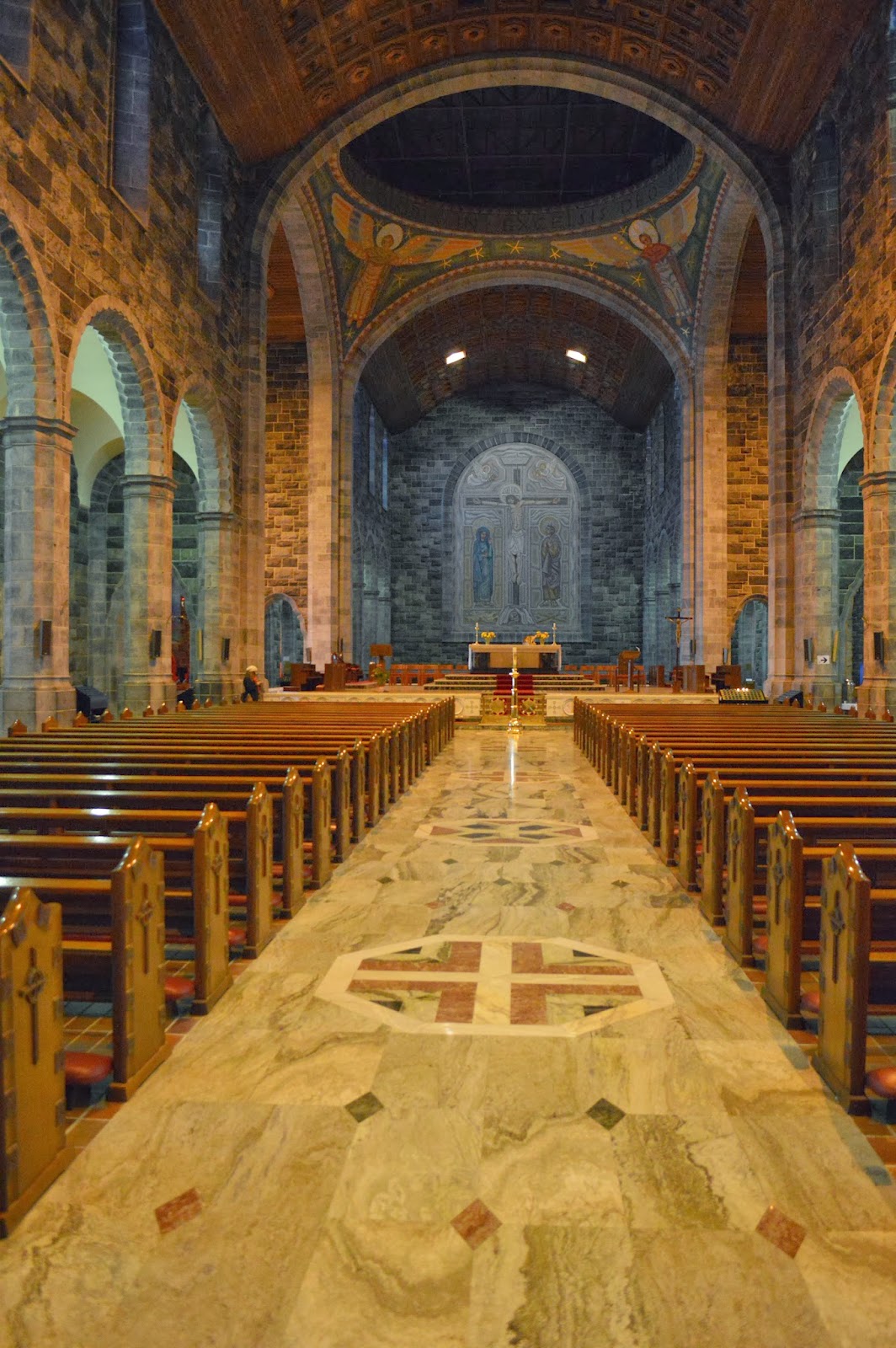 We left the cathedral and quickly walked back to our car. At this point we were soaking wet, starving and a bit over the whole thing. I hate that we felt that way in what had been one of my favorite places but honestly with the weather being what it was it was hard to fall in love with it. At least I have the sparkling, shiny memories of Galway and I hope someday to go back again and relive the moments of the first trip- good weather and all!