We woke up earlier than we'd have liked the first full day in Ireland, and now it was abundantly clear that I had gotten a bug from the recycled air of the airplane- say hello to the vacation sore throat and cough. But it was the day to pick up the rental car and head out of Dublin into the beauty of the Wicklow Mountains and nothing was going to stand in the way of my much anticipated vacation. So with that attitude we took a quick walk back to Trinity College and the gift shop for the Book of Kells, there was just one more treasure to be bought before we took off away from the city. 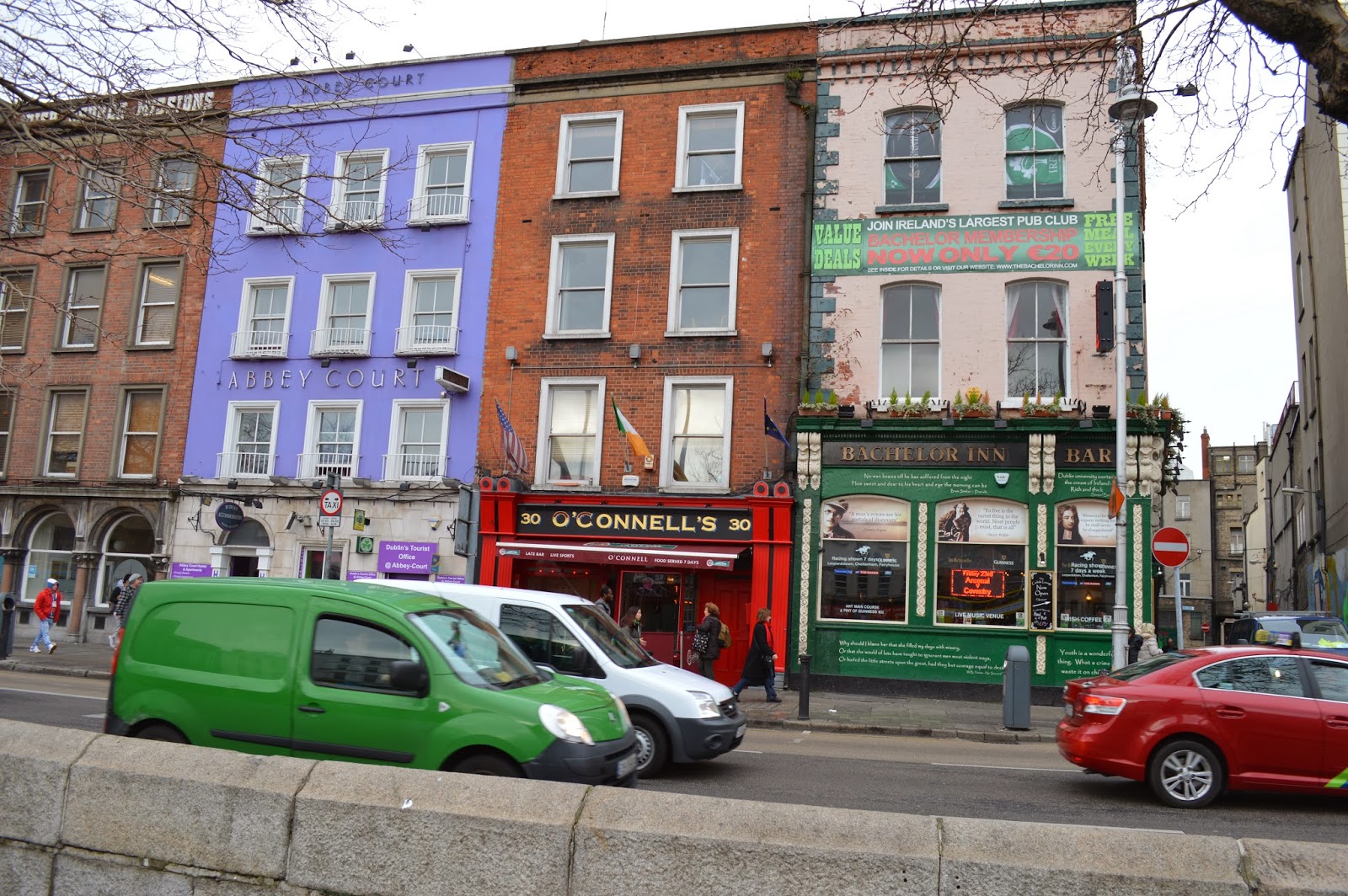 Originally we were going to walk to the car rental agency but once Google Maps advised us that it was a 40 minute walk we decided that a taxi would be our best friend. Routes are never straight forward in Ireland. It might only be a few miles but those few miles are going to be twists and turns and back alleys and it's going to take you far longer than you'd ever imagine. Fortunately for us the taxi stand was just across the main road from the hotel. We had an awesome chatty Irish cabbie who gave us great advice for getting out of Dublin to the mountains, which of course we didn't take, but more on that later...

We picked up our little Nissan Micra, which Daniel explained was an old lady's car and jumped right into the chaos that is Dublin driving. A word to the wise for anyone thinking of driving while in Ireland- don't rent your car from the Budget car rental in Dublin City Centre- it's smack dab in the middle of the craziness and was a daunting experience even for my English husband who learned to drive on the left in the city of Sheffield. Also definitely get Sat Nav (or bring your own from home updated with the European maps)!! We opted not to because it was more expensive than the car rental itself, but whoa can you avoid a lot of headaches with it.  I happen to be married to a man who has the best sense of direction of anyone I've ever met, seriously he's like the sea captains of old, navigating by stars etc... so we ended up being fine, but we certainly had our crazy stress moments of, "Where the heck are we?!" Irish roads are not well marked. There are times where they tell you every 5 feet what road you are on and where you need to go and then all of a sudden you're in the middle of a village where you can only go left or right and there are NO signs- you just have to guess which way the N4 is! Sometimes we guessed right and other times well, let's just say we did some detours through the countryside. (for those of you not using SatNav our saving grace was the AA Glovebox Atlas Ireland, but be advised there are no "L" roads on the maps and you'll need a separate one for Dublin itself- well any of the towns and cities really- this atlas doesn't do surface streets BUT it is amazing for navigating from town to town.)

Once we got out of Dublin and the Greater Dublin area we were home free. There is nothing like open space to make me breathe easier. I don't mind a city now and again but the country is where it's at for me (and my husband agrees, thankfully) County Wicklow is beautiful, it's up there on my list of favorite Irish counties.


We couldn't check into our cottage in Lacken, Wicklow until 3 that day so we had plenty of time to fit in some site seeing and jump right in. Top of my list was Glendalough (pronounced Glenda-lock). I didn't go to Glendalough my first time to Ireland because I know that it's an incredibly popular place to go. I know that sounds weird, to purposely avoid a popular place but popular in peak season = incredibly crowded and that is just something I wanted to avoid. I figured this time around because it was such off season that we'd be safe going. I am SO glad that this was added to the list. Now I know why it's so popular. Although I have to say a huge part of the magic for me was the fact that it wasn't crowded at all.

Before reaching Glendalough we went through the small village of Hollywood. Yep, there's a Hollywood outside of California. One of the things that we didn't get a picture of is the "Hollywood" sign. A clever farmer has erected a replica Hollywood sign in his field on a hill. We could never get a good picture because there was no where to pull off and there was always a car behind us so we couldn't just stop in the middle of the road. We did however get the traditional sign for the town, so at least we've got proof. 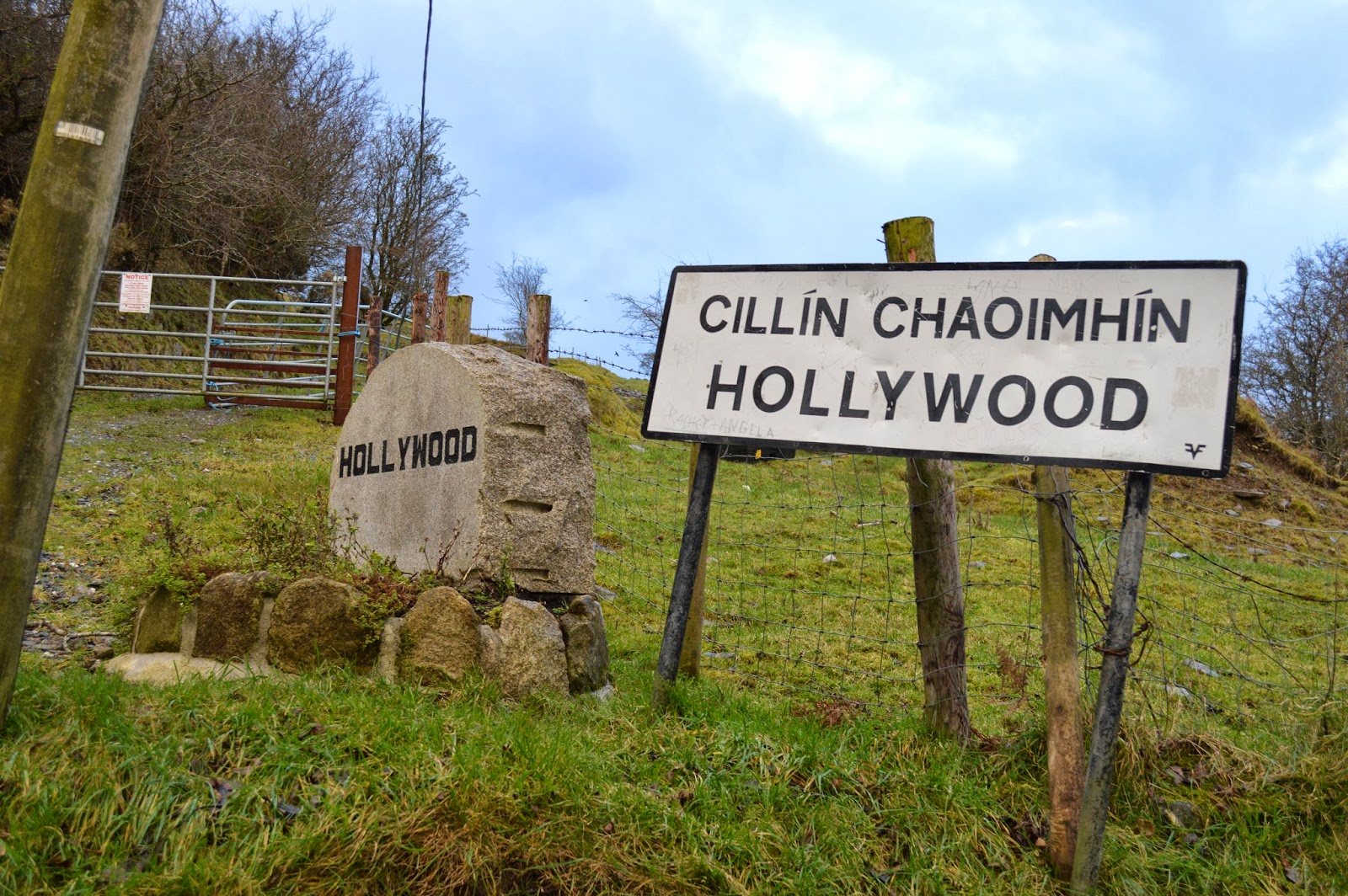 The drive to the Wicklow Gap was just wonderful. Here, finally was the Ireland I wanted to see. Like I said, I can enjoy a city now and again but nature that makes my heart sing! The little Nissan did it's very best to get us up the hills and it was amazing to climb and see the landscape change into pine trees and rocky streams. We also had amazing weather for the day. Probably the best we had the whole trip. It made the day really special to have patches of blue skies and sun.


The weather at the Wicklow Gap was brutal. You can't tell from the pictures but it was absolutely freezing and windy- a cold like I've never experienced, but went on to experience quite a few times on this trip- this is like bone chilling cold my friends! But I have to say, it's the kind of weather one expects from a landscape like this especially in January, it would have been disappointing otherwise and besides this was our first real full day in Ireland, I was ready to bundle up, we had after all just left crazy above average temperatures in California, we wanted some winter in our lives.

As we drove down into the valley suddenly off to our right stood the famous roundtower of Glendalough. One second it was beautiful, rugged landscape and the next boop there it is! It's still so isolated, I can only imagine how it would have been in St. Kevin's day, truly in the wildness, the middle of nowhere! What a beacon of light that roundtower must have been to weary travelers and villagers in need! English troops invaded in 1398 destroying a large part of the monastic settlement, but there is still so much to see and it's easy to imagine what it would have been like in it's heyday.

We were incredibly fortunate to have much of the place to ourselves. There was a bus group of about 14 or so wandering around but they must have already been there for awhile because they seemed to be dispersing when we got there. Other than a handful of other people it was just us. I was really excited to be able to get photographs without random people walking in and out of the shot. Glendalough really was a haunting place to me and I would love to go back when it's warmer, even if that means crowds. I'd like to wander the path to the upper lake and hear the rush of the river go by while not freezing my bum off. We'll be back Glendalough. 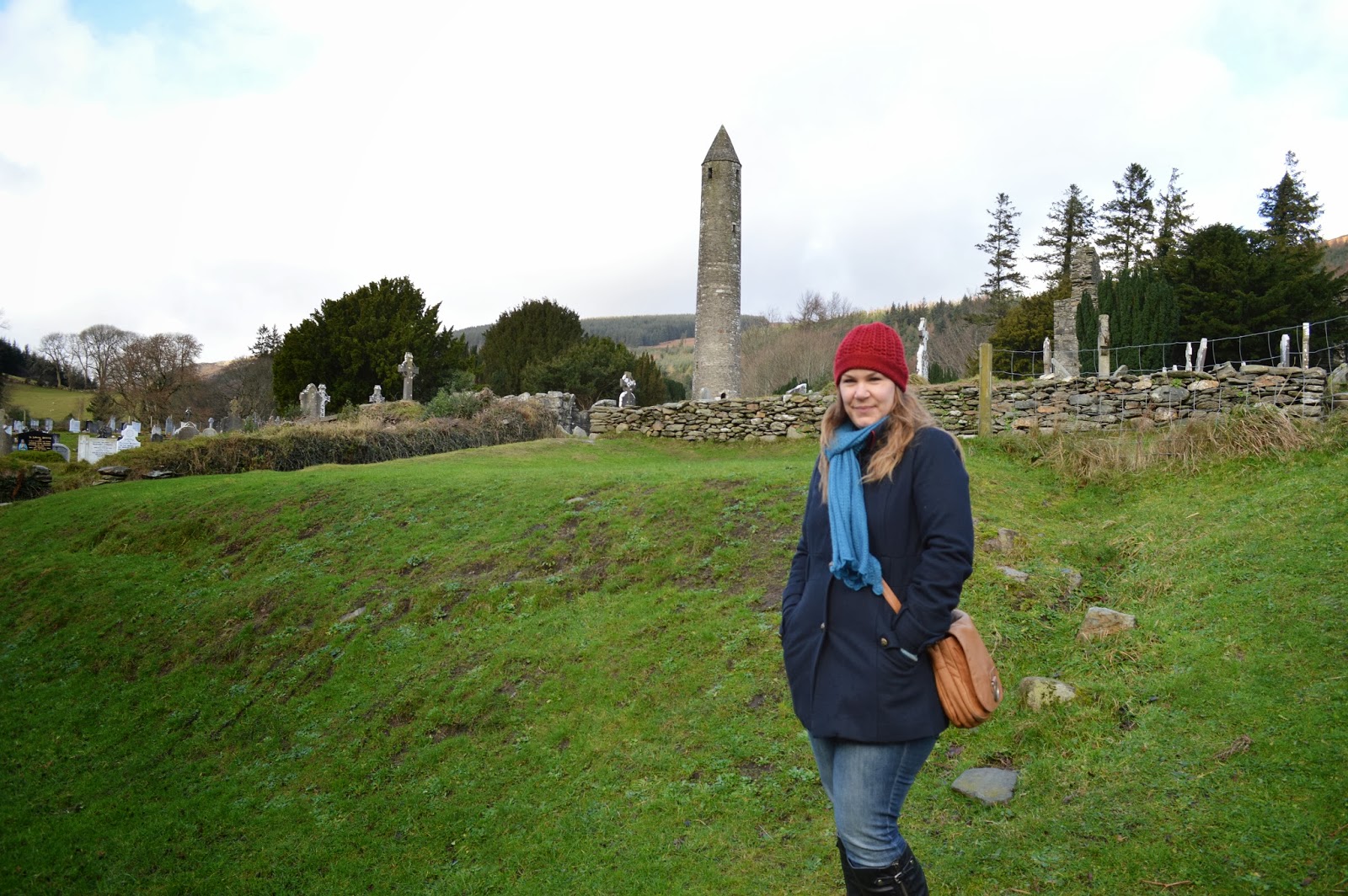 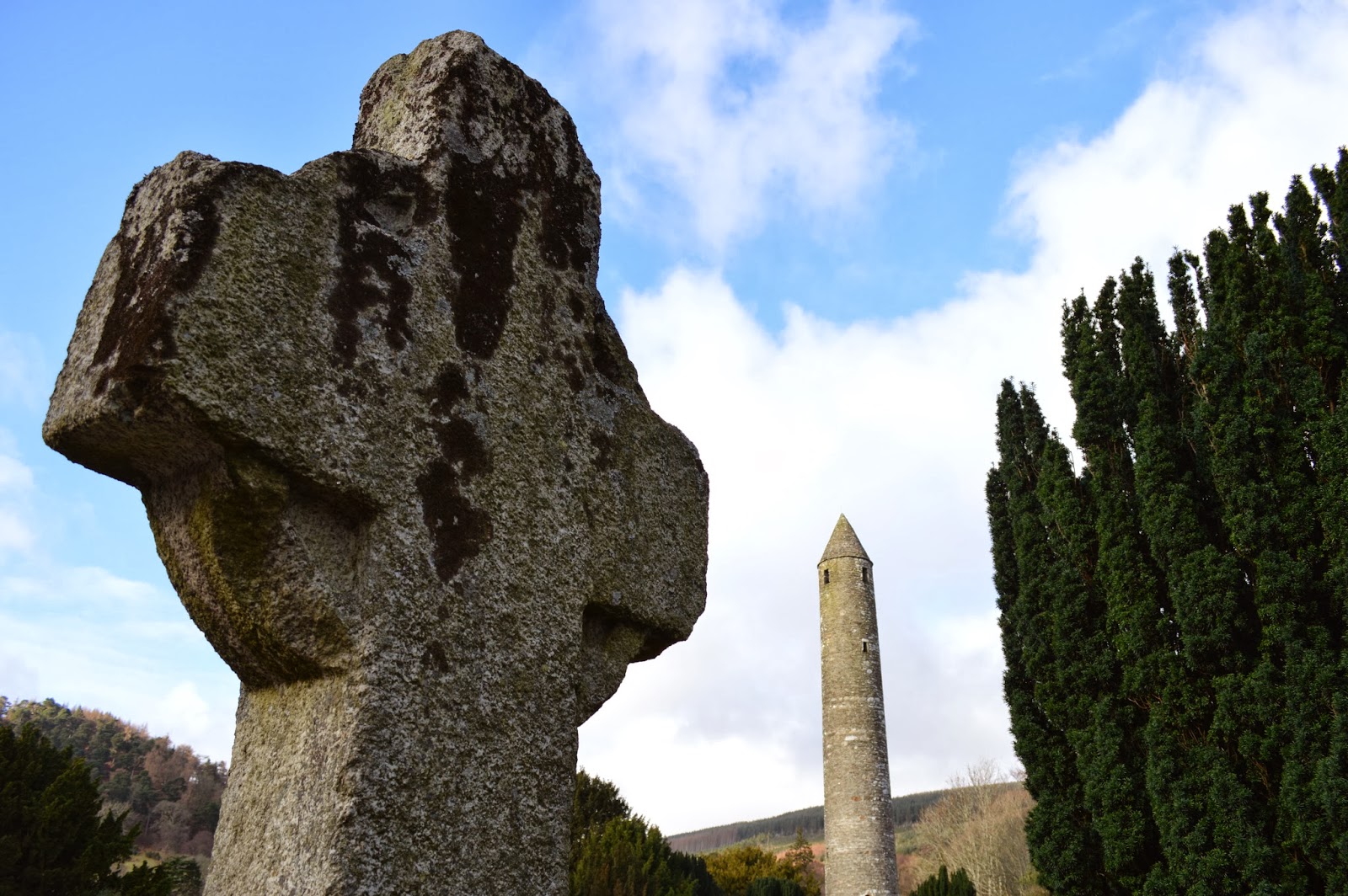 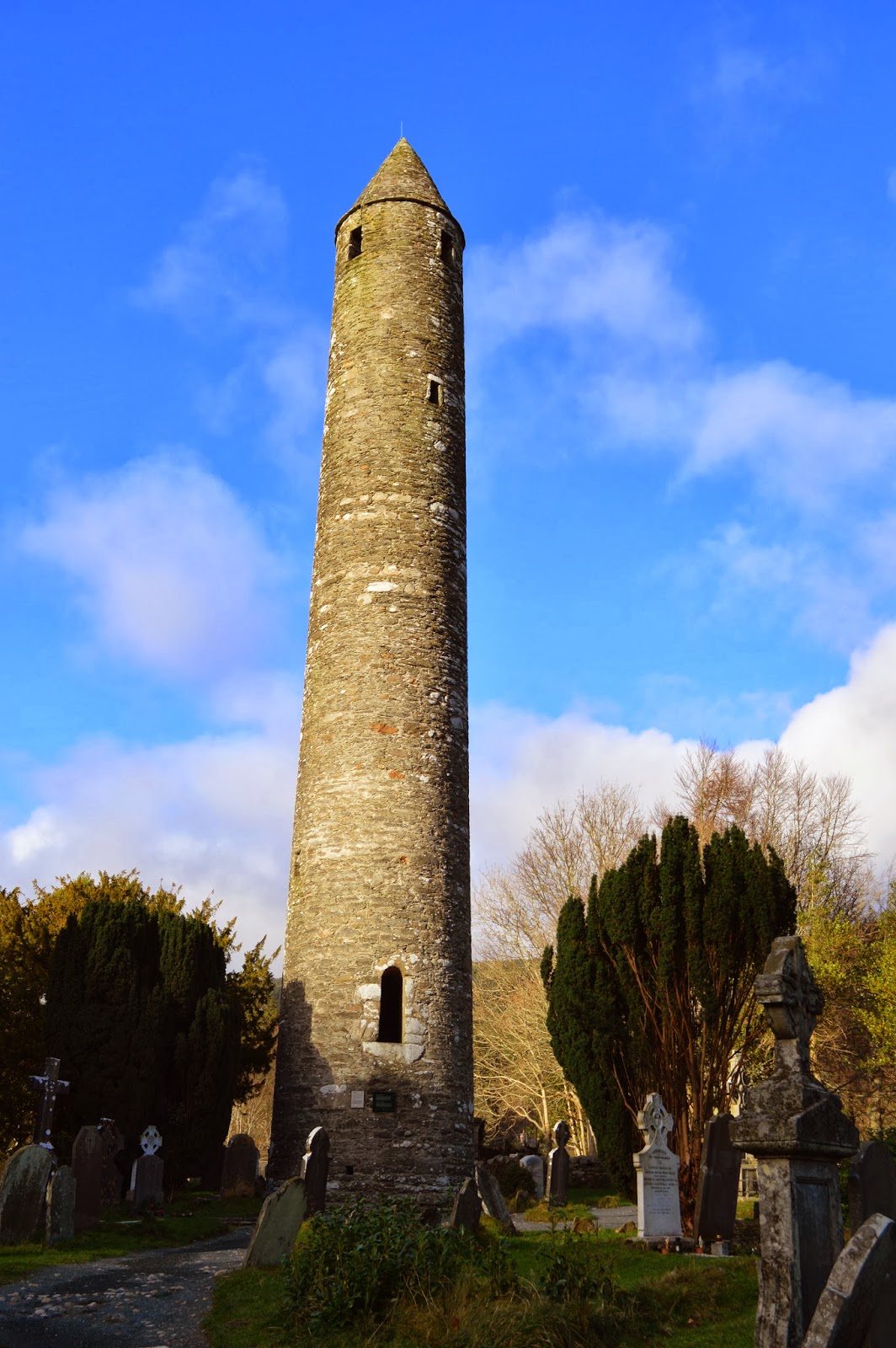 After our tour around the monastic settlement we jumped back in the car and headed for the coast. We still had time to kill before we could pick up the keys to the cottage, so we decided to head to the town of Wicklow. One of the big reasons for heading to Wicklow was that we needed to find a grocery store. We had yet to see one and we had a kitchen to stock for 4 days! I would never admit to our hosts that we drove all of the way to Wicklow for groceries but for you my friends I'll confess. It was only the following day at the cottage that we realized that there was a rather large (by Irish standards) grocery store not 5 miles from where we were staying, at this point we had no idea and hadn't even been that direction yet. We got to see gorgeous countryside though and that's never a bad thing in my book.

We finally came upon a Tesco and gathered everything we thought we'd need for 4 days, which basically amounted to a wonderful sliced loaf of bread, peanut butter, jam and a bunch of veggies to roast. We were on a budget and also trying to save our calories for the possibility of fish and chips and Guinness- you never know when you're going to have fried food and beer in a place like this. We also got some pre-prepared sandwiches for a picnic in Wicklow. It was a lovely day so far.

We drove back the way we came, in a bit of a rush because all of that picnic lollygagging we were now late to pick up the key to the cottage. Fortunately for us the owners lived right next door so I knew that we'd get the key eventually, even if they weren't home due to our tardiness. I have to admit I was really nervous to go to the cottage because we really didn't know where it was exactly and the directions were so vague! Left at the AIB bank, right in the middle of the village, left at the little bridge- holy moly how were we to find it?! (those really were the directions my friends, no joke!) After finding the cottage I now understand the directions. There really is no other way to describe it- there are no road signs or street names- the village of Lacken is just a few buildings and a bunch of farms. Our hostess told us that if we walked down their road to go into the village we were liable to run into 1 of 5 neighboring farmers named Paddy! Even she laughed at that! (for those we are interested here's a link to the trip advisor page for Kylebeg Cottage. I definitely recommend it!)

We were greeted warmly by our hostess, Caroline who showed us everything and gave us homemade scones! We settled in at the cottage, took a deep breath and started to relax a little bit. We had a big day ahead of us the next day- making our way to Cashel, Tipperary to see the Rock of Cashel, one of my favorite places from my first trip, so we called it an early night and got some zzzz's.

Up next, wacky roads and the seat of Kings!!