Setting off early once again, we prepared our pb&j picnic, bundled up and took to the roads. I actually find myself missing that little drive from the cottage to the town of Blessington, passing the beautiful and stately Russborough House, and then on to Naas to catch the motorways. If you would have asked me before this trip if we would be taking the motorways instead of the country roads I would have said, "Absolutely not!", but my friends once you've gotten dizzy and lost on those twists and turns, you realize the beauty of the motorways as direct and quicker paths to your destination that then allows you more time at said destination. So we used the motorways whenever possible to arrive at our destination but then took the country roads back when time was not of the essence. Win-win situation! 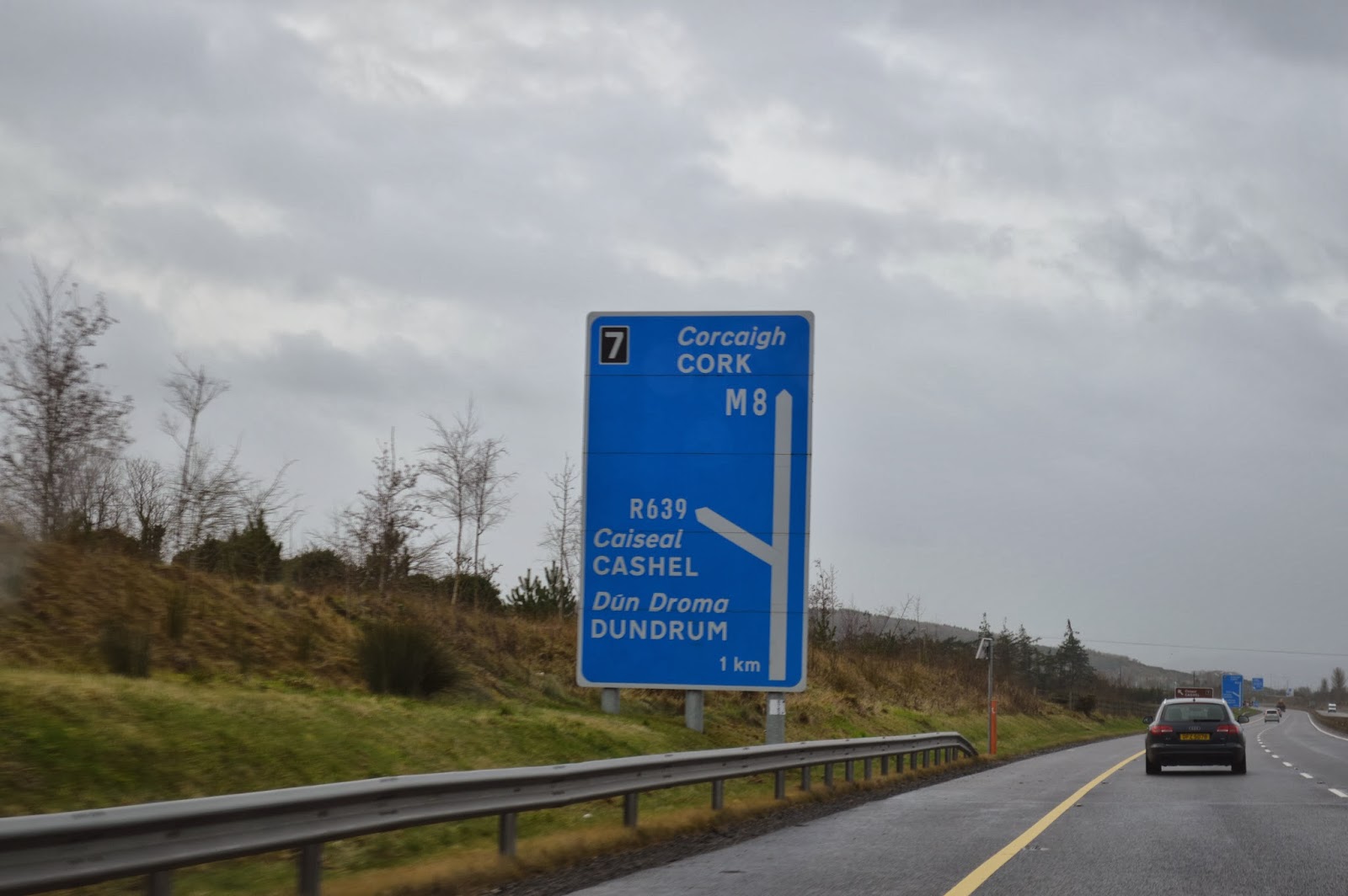 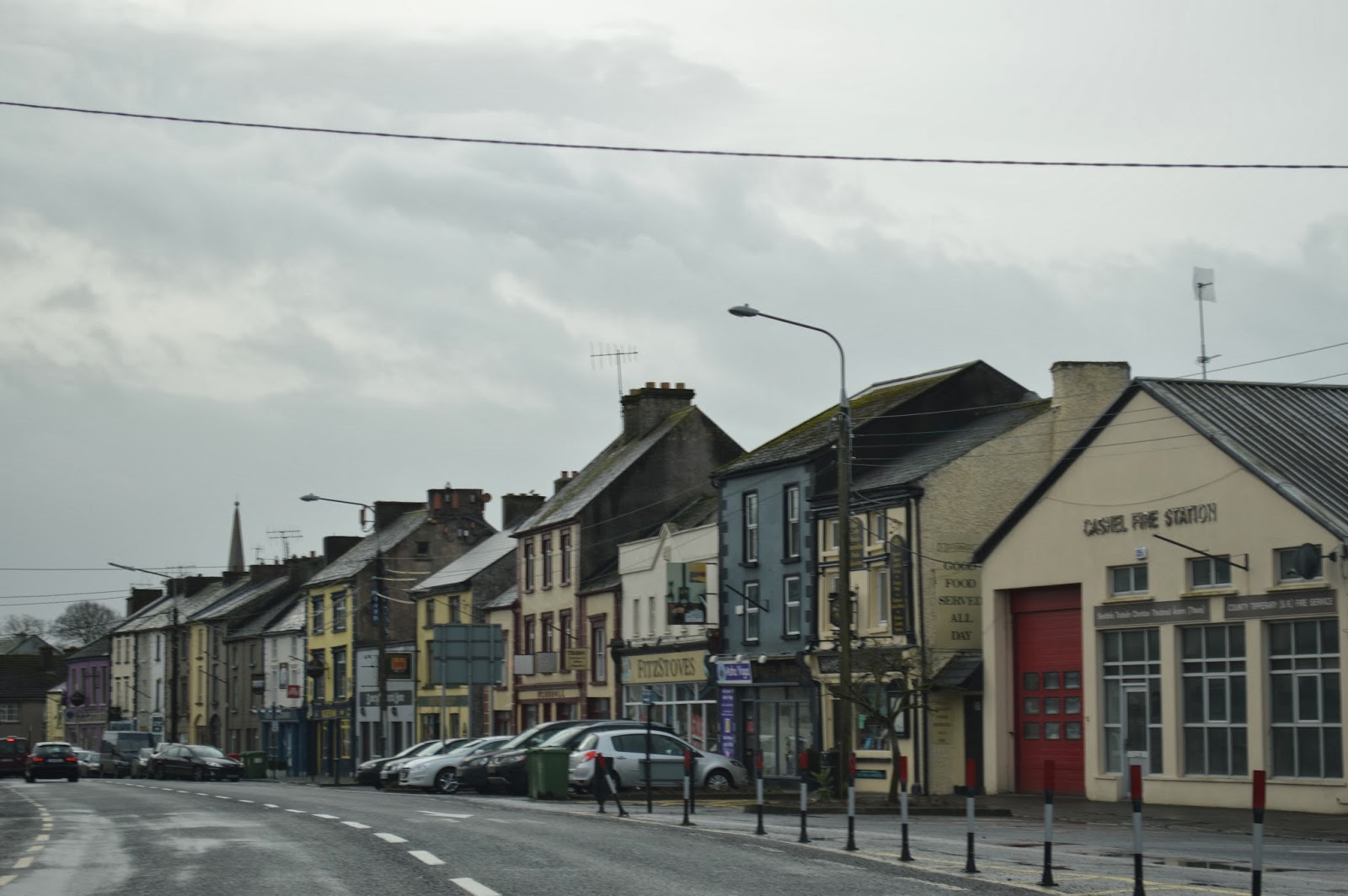 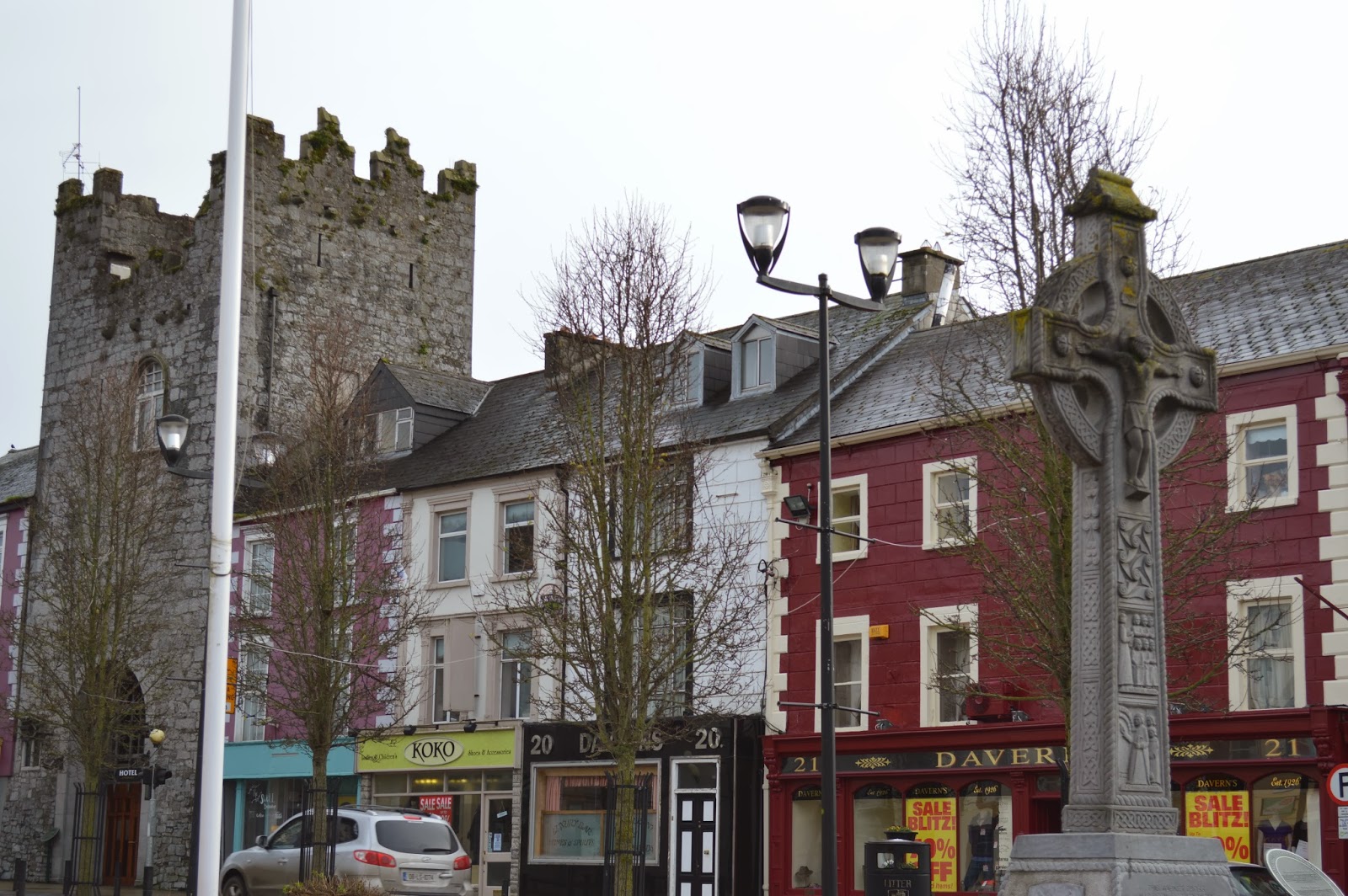 Our destination for the day was Cashel in Tipperary, specifically The Rock of Cashel. The Rock of Cashel was the seat of the kings of Munster (a province in Ireland) and also where St. Patrick's cross is housed. (more on that later...) In 1101 this fortress was handed over to the church when a chapel and cathedral were then added. What we see today dates from the 12th to 15th centuries.

When going to Cashel the first time (13 years ago, eek!) it was early September and close enough to summer to have great weather but also to be surrounded by other tourists who had thought it was a good idea to be in Cashel too. The Rock of Cashel (also known as Cashel of the Kings) is a popular tourist attraction and that becomes obvious when parking is scarce and lines of tourist snake up the road to the entrance. It would have been impossible to get photos without someone in the shot at that time. This is where off season and bitter January cold come in- there was practically no one there!!! When we first arrived there was a group of about 4 or 5, but they were leaving so after they exited it was just myself, my husband and 2 other women- that's it!! What an experience!!! We were all conscious of giving each group of 2 the space and privacy of wandering the place alone. It was an unspoken thing that we just did. I loved this time at Cashel- it was an unexpected treat to get it to ourselves and I did my best to drink it all in. 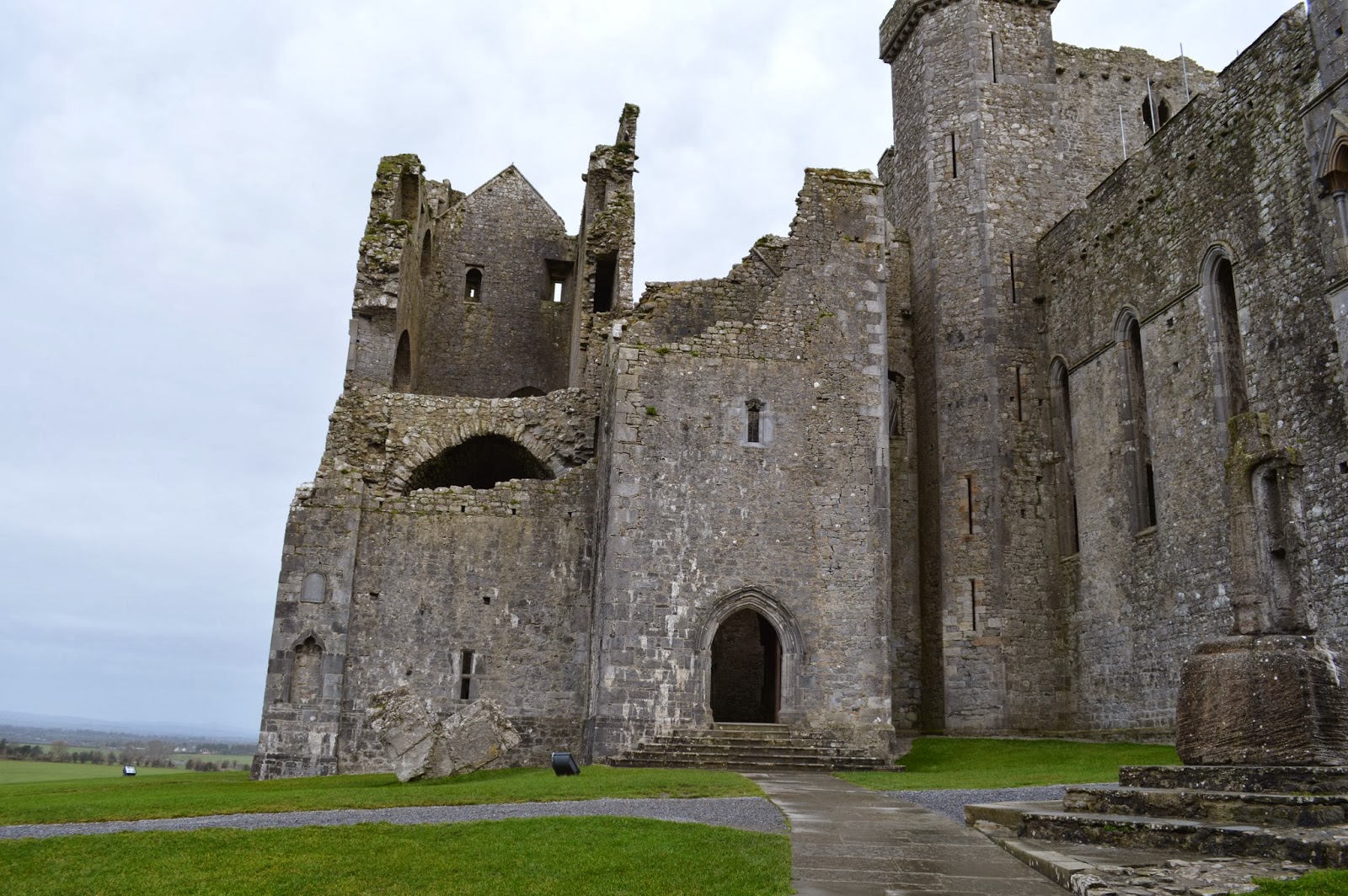 Besides being a majestic ruin that dominates the landscape around it, the Rock of Cashel houses St. Patrick's Cross. Supposedly it was carved in the 12th century to commemorate the alleged visit of St. Patrick to Cashel in 450 AD, when he converted and baptized the king. The original cross and massive base are housed in the Vicar's Choral, while a concrete replica sits in the the original spot out on the yard. There are some silly legends surrounding the cross and you'll notice if you follow my blog that a previous picture in this post had me hugging the cross with all of my might. I never explained that photo so I'll explain it now: there are two legends involving the hugging of St. Patrick's Cross. The one that we (that is my travel partner Denise from the first trip) were told was that if you hug the cross and your fingers meet you'll never have another dental bill in your life. The one I have recently learned also has you hugging the cross and touching your fingers but this time it's a hangover cure. There is also a legend which states if you hop around the cross 9 times counterclockwise on your right foot you'll get married within a year. Yep, that pictures exists too my friends. 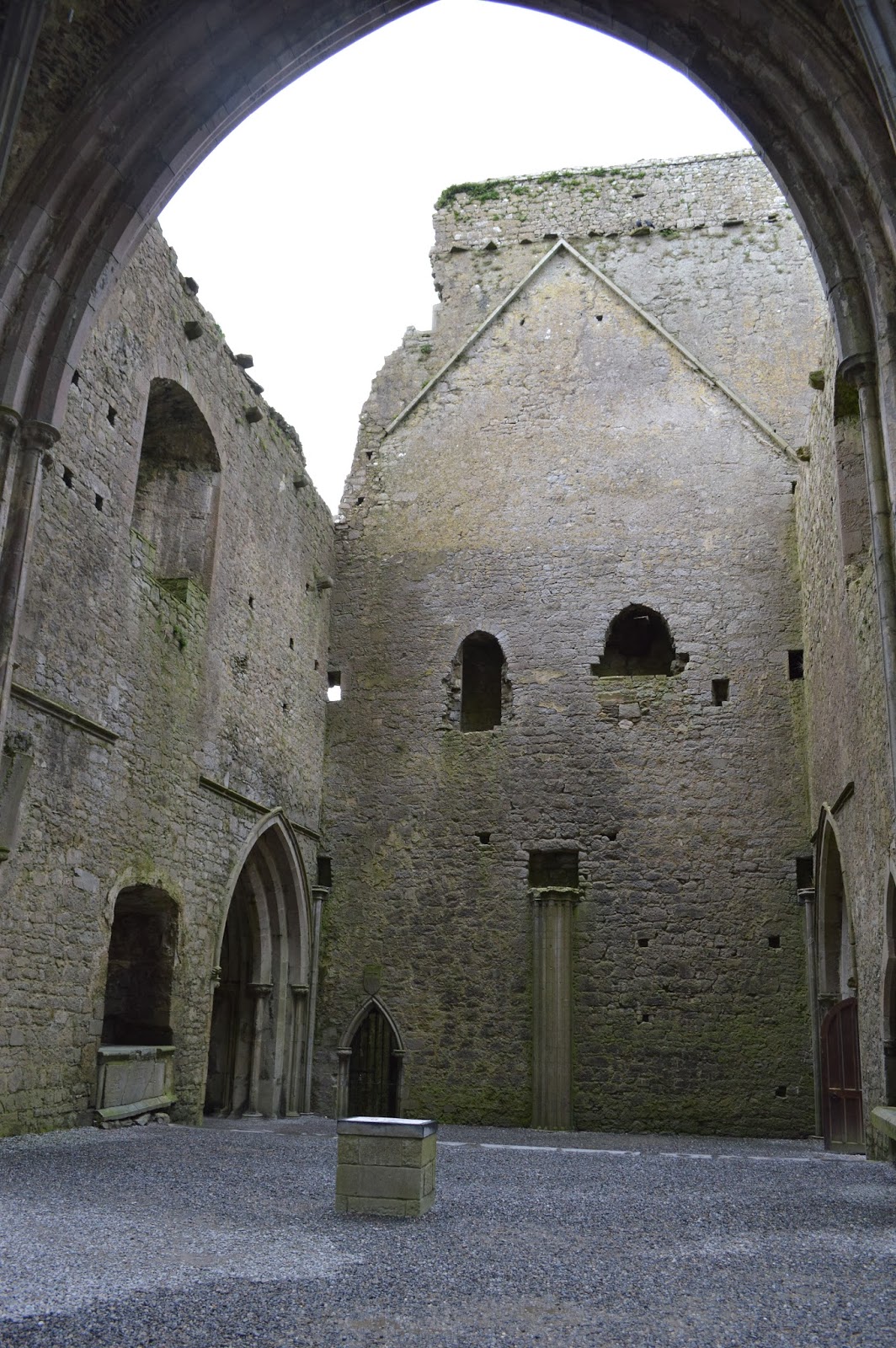 After our amazing (and freezing) experience at the Rock of Cashel it was time to move along. We took out the map and decided that we would take the scenic route to Kilkenny. This route was displayed on a map in the Cashel city centre originally as a circular route, so we cut off the second half since we were not coming back around to Cashel. But first we spontaneously decided to drive to the town of Tipperary. Tipperary is a small town but it's been memorialized in song quite a few times, many of you will have heard "It's A Long Way To Tipperary". Upon research it appears that Tipperary played a role in World War 1, as well as the Irish War of Independence, which is probably why it lends itself to song. We chose Tipperary as the spot to break out our picnic, so we ate in the car in the shadows of the church and watched the girls in their Catholic school uniforms walking home for lunch.

We backtracked to Cashel where we picked up the R692 through the villages of Fethard, Cloneen, and Mullinahone to the N76 taking us to the city centre of Kilkenny. A word about this scenic route. As I metioned before this route was prominently displayed on a map in Cashel, enticing tourists to go off the beaten path and take these country roads to Kilkenny. In summer I'm sure this route is gorgeous, but in the dead of winter it just felt long and unnecessary. It truly felt like this scenic route had been designed with the sole purpose of getting tourists to visit these out of the way villages that you otherwise would ignore. It's not to say that these villages weren't charming, but we found them frustrating as these little places were where the road signs seemed to disappear, sending us on a wild goose chase to find that darn R692!

Kilkenny on the other hand is a lovely place. This is a town I'd like to go back to and spend more time in. Because we didn't know how much daylight we'd have left and we didn't want to be stuck on these rural roads in the dark we didn't stop in Kilkenny. We drove around the town and both said how much we liked what we saw. It's cool to find places that we'd like to return to. To me, it's a good feeling to know that we're not quite done with a place, that our story has it's own "...to be continued".


After Kilkenny we decided to detour on the advice of our travel guide to Castledermot to see the high crosses. The travel guide raved about this site and basically said we should not miss it! Well I'm here to tell you, go ahead and miss it. Don't waste the time it takes to get there. It's not that the high crosses aren't significant or important but after having seen The Rock of Cashel and Glendalough it's just not impressive, so unless you want to see these specific crosses, keep on driving.

While on these back roads we stopped for sheep, saw horse stable after horse stable and quite suddenly the Irish Army.  Unfortunately I was too stunned to take a photo, so there's no photographic evidence but you'll just have to trust me when I say that driving around a bend in the road and suddenly seeing tanks from the Irish Army with soldiers standing up out of them with full face balaclava was an intimidating and strange scene indeed! It was so unexpected and unnerving that we actually missed our turn and had to backtrack! What a day!