This was one of my favorite days. It was long and we were in the car for most of it, but we got to see so much of the country, and there was nothing like watching the landscape and weather change.

We also crossed the border, which is essentially an open border now- marked only by the change from kilometers per hour to miles per hour.

As usual, we woke up bright and early knowing that we had a long journey ahead of us. It's ridiculous how many counties we went through that day. 7 counties in the Republic of Ireland and 2 in Northern Ireland in that one day alone!

The weather is so changeable in Ireland and this day was no different. It was forecast to be horribly stormy with ice, high winds and sheets of rain in several parts of the country. I have to admit I was a bit nervous when I heard this, knowing how much ground we had to cover that day and also knowing that we were headed not only north but in a north westerly direction, exactly where the weather can be the worst.

We did encounter some hard rain, the kind that your windshield wipers can't keep up with even at their fastest speed, only to find 20 minutes later sunshine. We had most of our worst weather in the Counties of Westmeath and Longford, but honestly we encountered rain in most of the counties and some hail in County Donegal.

It's so hard to describe the landscapes that we saw rushing past the window of the car. One of the most amazing things that we saw were these shrubs with red branches. I never got a good photograph because they seemed to grow right next to the N4, and you can't exactly stop and takes photos, but they do appear in the background of some of the photos. When reviewing my photos for this post I realized that the thing that clearly made the most impact on me was the ever changing sky. It's surreal to think the photos were all taken on one day and sometimes within 10 minutes of each other. 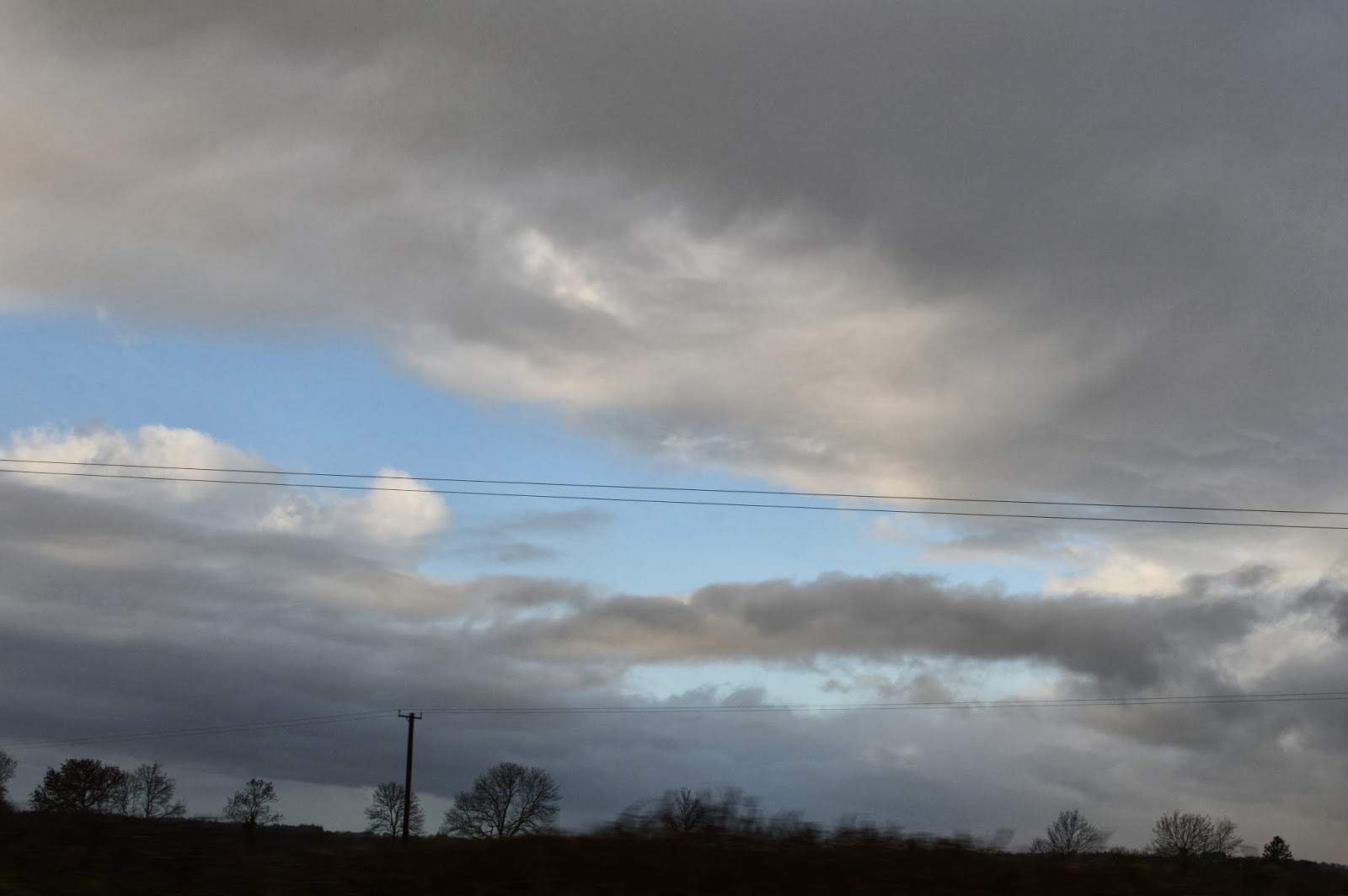 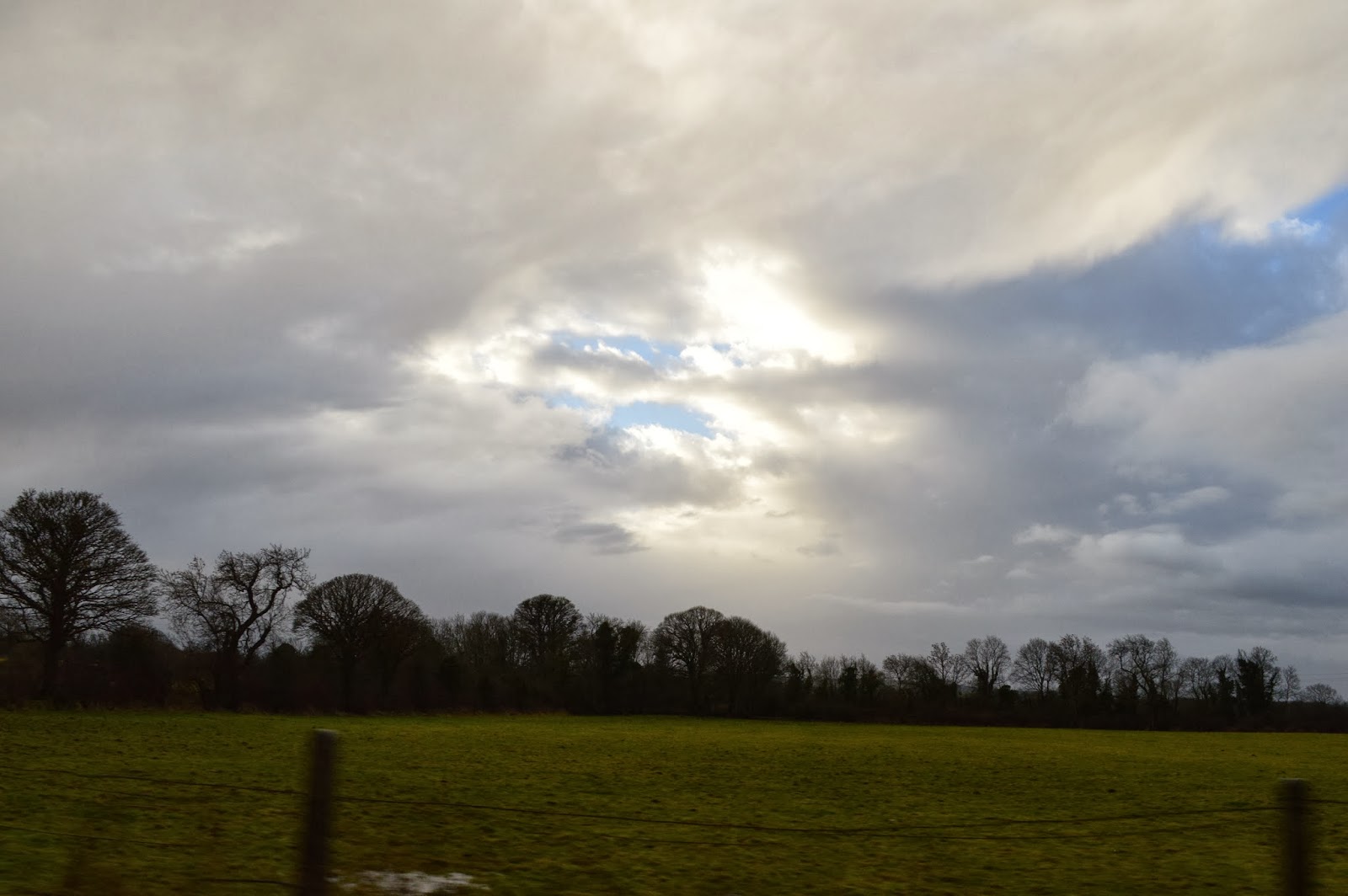 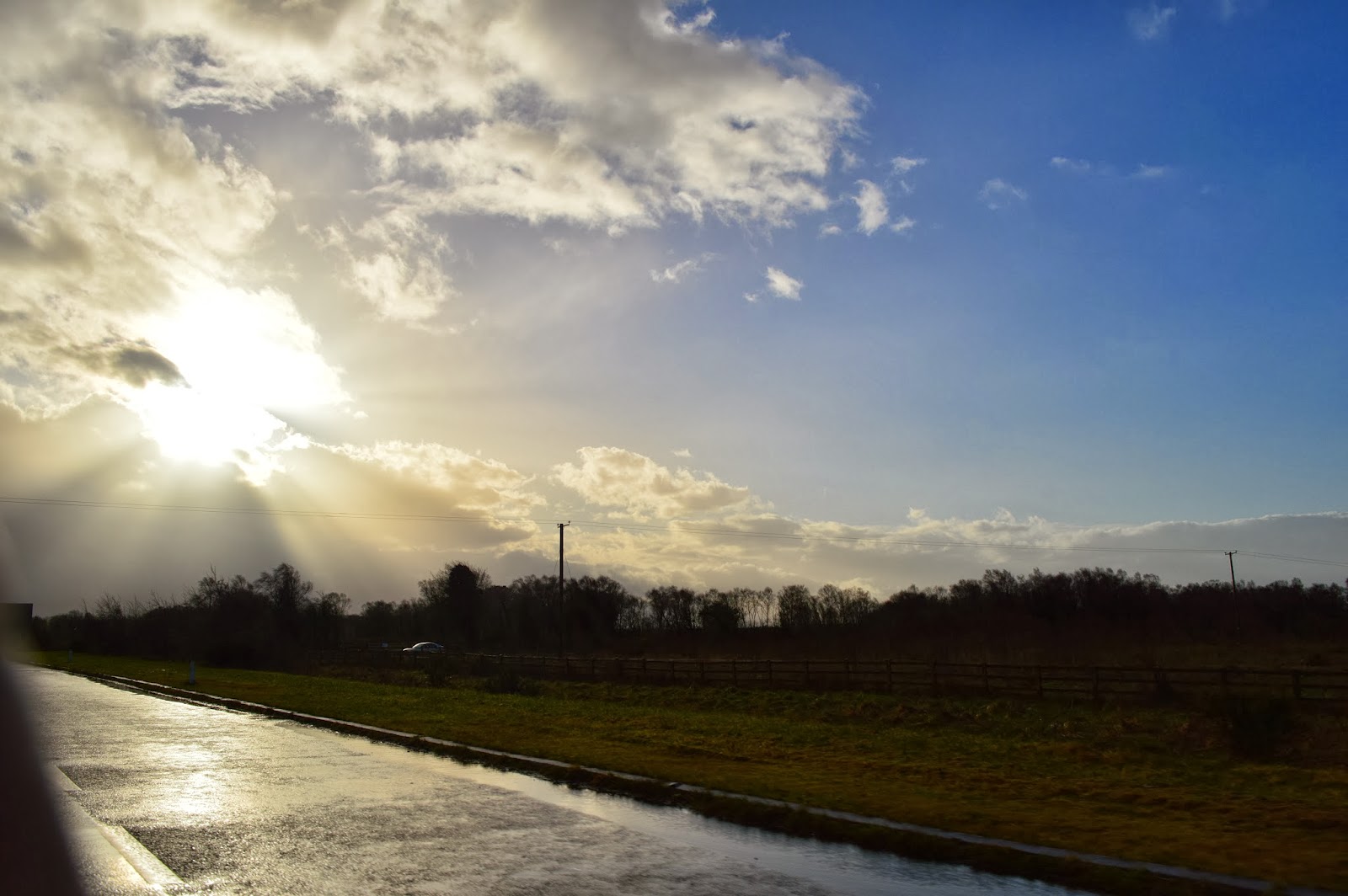 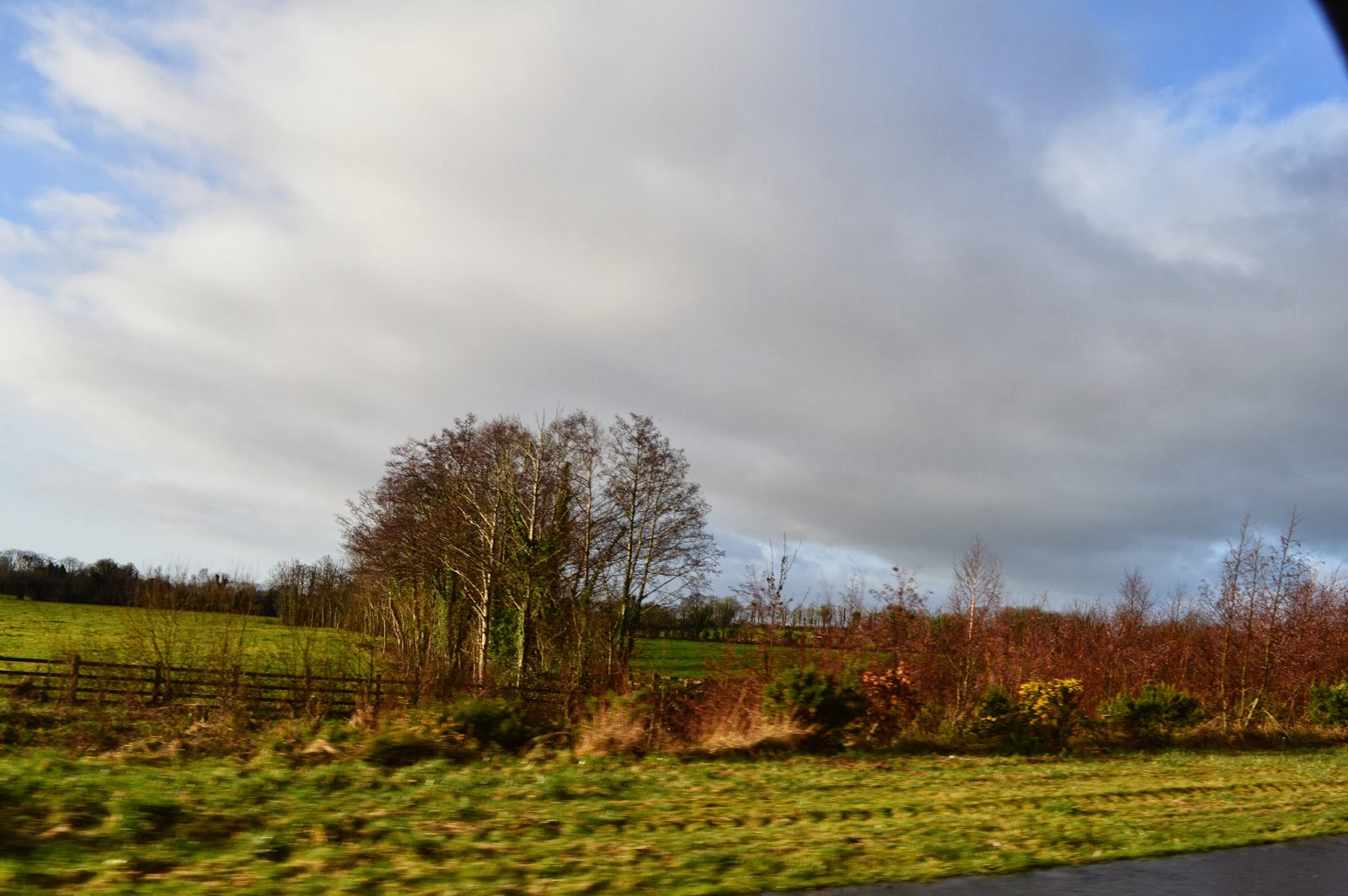 Much of Meath and Westmeath flew by unnoticed, we were so tired and the sun rises later than we're used to, so much of that first hour or so was dark and a bit dreary.  While consulting the trusty road atlas, I noticed a town circled and quickly accused my husband of defacing the book. Why was it circled? What was the importance of this town? Clearly one of us wanted to remember it and I was sure it was him. I recognized the name of Ardagh and it took me several minutes to figure out why I did. Alas, my husband did not circle it, I did! (whoops!) Ardagh is the small village where my 3 times Great Grandmother hailed from. Mary Nolan was baptized in Ardagh in 1841 and left the tiny village to emigrate to the United States in 1864 around the age of 23. Four  years later she married John Muth, a man of German descent in the Bay Area of California, where they both lived until their deaths- well into their 80s. It had been my intention to visit both Ardagh in Co. Longford (for my dad's side) and Creevagh in Co. Monaghan (for my mom's side). In the end Creevagh was too far off the beaten path for us, but we practically stumbled upon Ardagh. It turns out that it was only 5 km from the main road we were taking to Sligo! I couldn't believe our luck. I have no idea which plot of land or house the Nolan's owned or rented so my imagination was left to it's own devices as we passed farms, small cottages and lofty estates. Obviously the lofty estates could be struck off the list but any one of those plots of land could have been my ancestral home.

Pulling into the small village the weather decided to take a turn for the worst. A large downpour welcomed us to Ardagh. The wind and rain really kept me from getting out of the car, so part of me really mourned the fact that I'd come all that way and wasn't going to be able to walk the cemetery of the local church to find my Nolan's. I suppose it's just another reason to go back to Ireland.

Soon we found ourselves in the beautiful landscape of Co. Leitrim, covered in loughs big and small- a place for water sports, camping and fishing. I can only imagine what this must look like in summer. We came upon the resort town of Carrick-on-Shannon and marveled at the many boats moored on the River Shannon, you could just tell this was a holiday destination.


After this we started to gain a bit of elevation. We neared the town of Boyle, situated in the Curlew Mountains, another place of sport and camping. Yet again an area that I'd love to see in summer. What will I remember about Boyle? It has confusing one way streets, no public restrooms and a ruined abbey.


I was so anxious to finally get to Sligo- it meant that we were more than halfway through our journey that day. I didn't know what to expect of Sligo, not having researched it much before we arrived because the route that Google Maps was going to have us take didn't go through Sligo. I'm so glad that my husband decided to ignore the printed directions and just get the atlas out and plan his own path.

Sligo is definitely a place I'd like to revisit. I don't know if we'll ever make that happen but I'd love to see it in spring or summer. It's a gorgeous coastal landscape, with really picturesque villages and seaside towns. Part of the Spanish Armada wrecked off the coast of County Sligo, not far from the town itself and it can also lay claim to W.B. Yeats. His grave can be found in the tiny village of Drumcliff very near to the town of Sligo. There is also a tie to Dracula and Bram Stoker. His mother came from Sligo and he acknowledged being influenced by tales of ghost stories about the Sligo Abbey when writing Dracula. Totally my kind of place.  Romantic poetry and gothic horror stories? Yes, please. 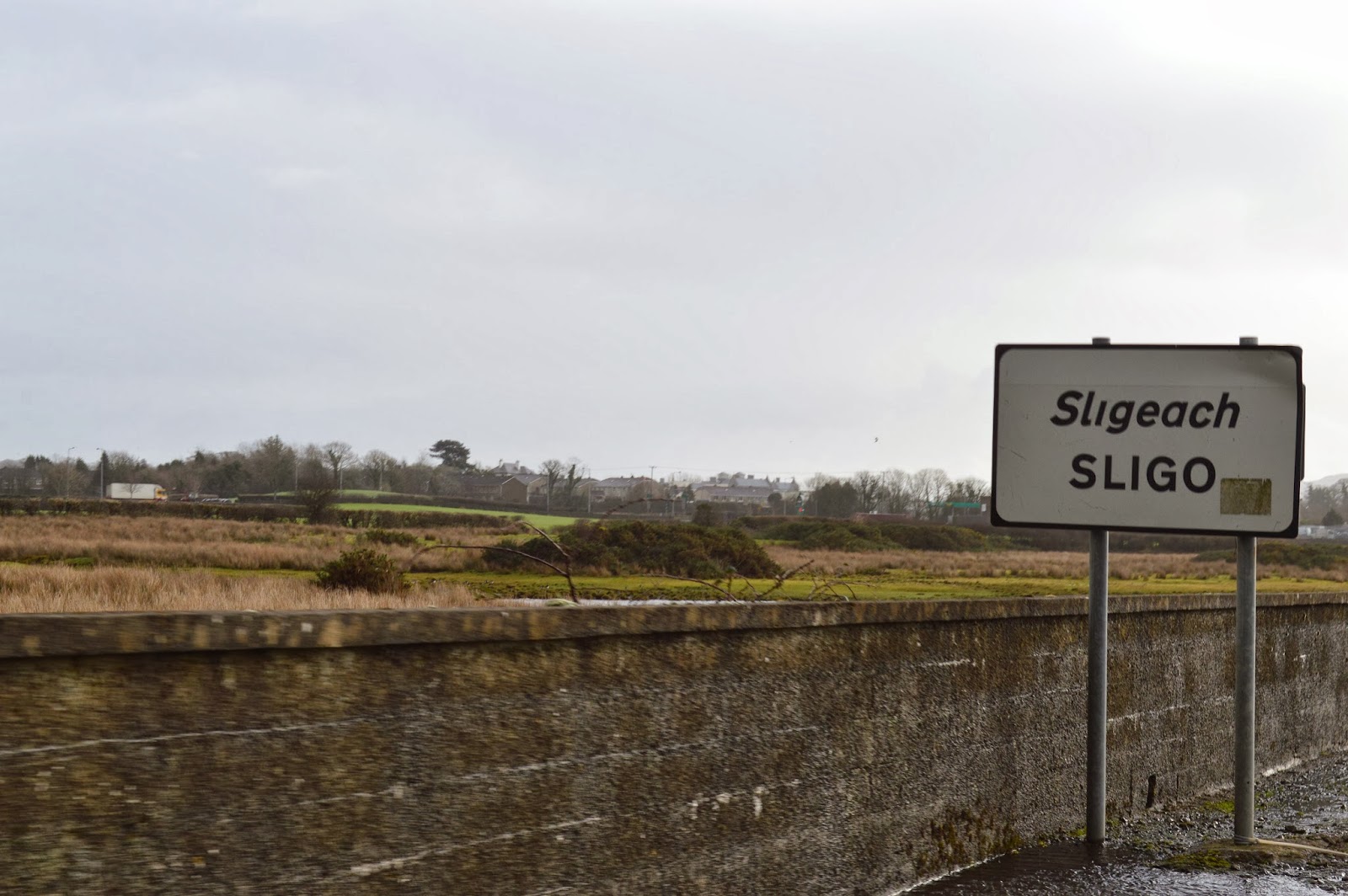 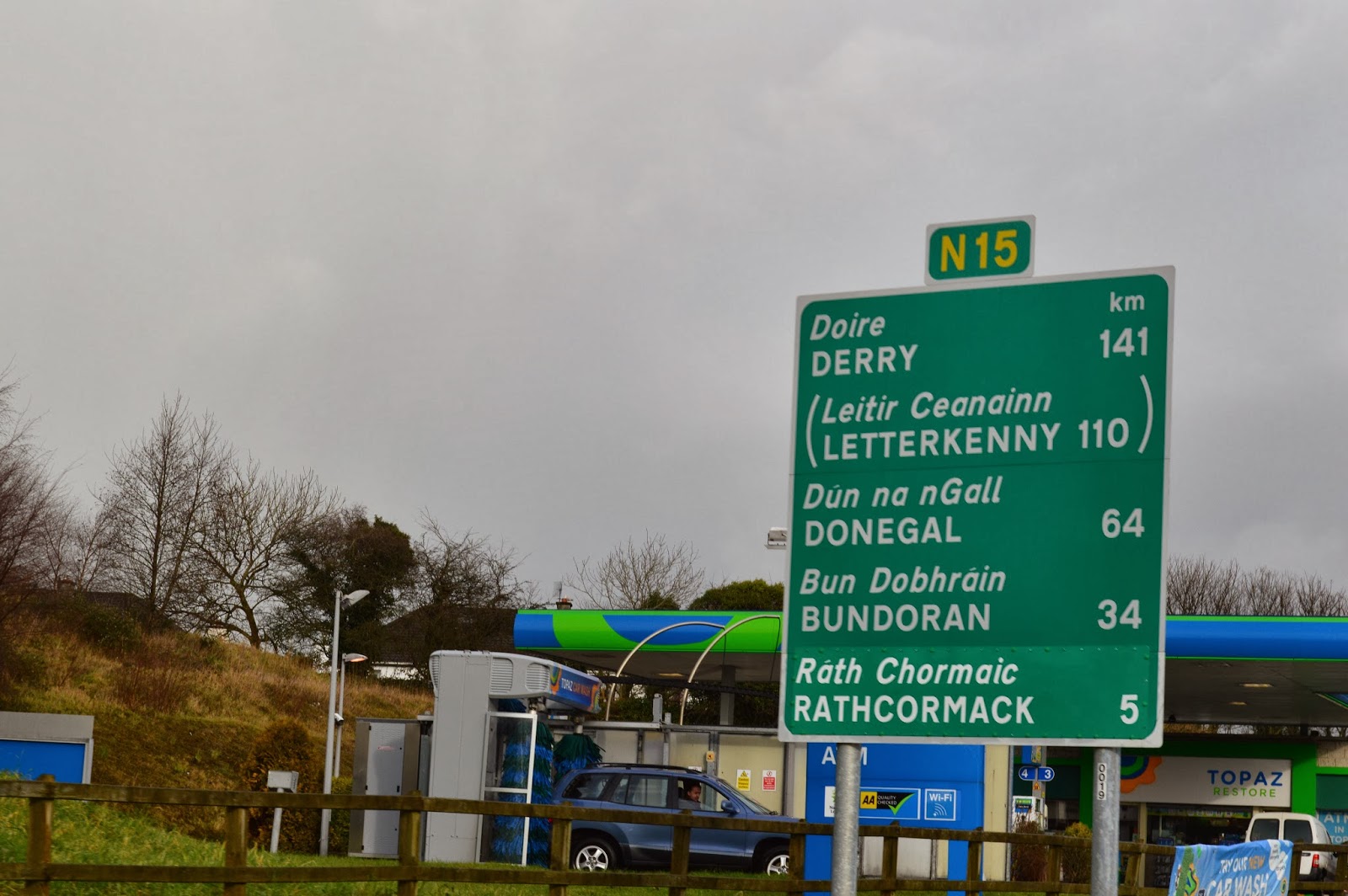 Not long after Sligo an amazing and eerie sight greeted us- off to the left on the coast what appeared to be a ruined abbey suddenly came into view. We detoured onto a local road towards the structure. As we got closer we saw that it wasn't a ruined abbey at all but a beautiful, gothic castle. Classiebawn Castle was once owned by Louis, 1st Earl Mountbatten. He spent most of his summers there until his boat (with him on it!) was blown up by the IRA in 1979. 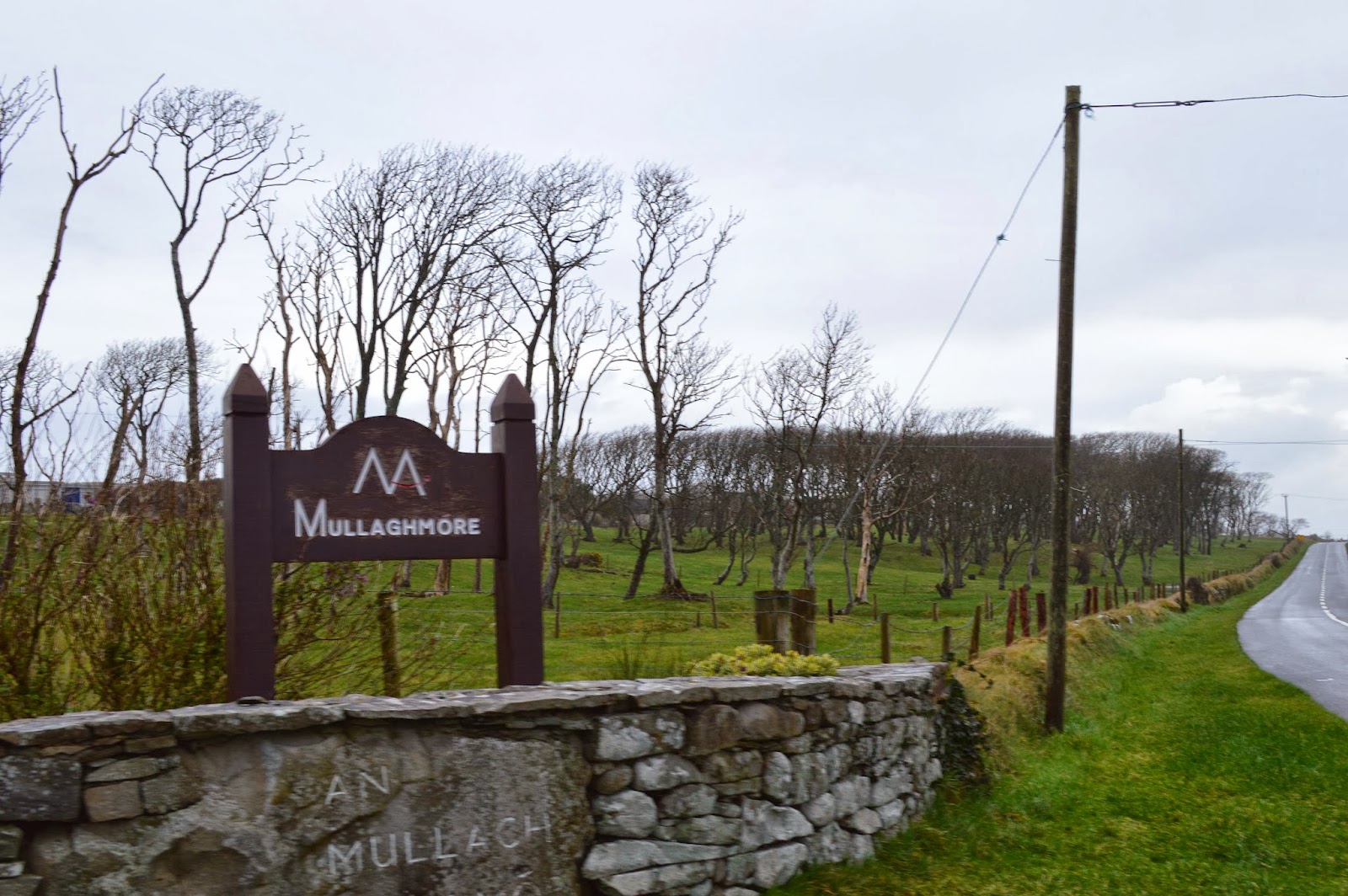 We turned back for the N15 to continue our journey to Derry, via Donegal. I was a bit saddened to be leaving Sligo and the dominating Benbulben mountain which so prominently features in the landscape, I definitely wish we had had more time to explore that whole area-to me it felt rugged and magical. Someday I want to hike those hills in beautiful weather. I think I might have left a wee bit of my heart in Co. Sligo...

We made quick work of driving and found ourselves in Co. Donegal. I keep saying this, but man it's another place I want to return to. The problem with going in January is that it's not the best time to see the west coast of Ireland. It's not exactly inviting, but has it's own wild charm and you can see that through the haze and hail. Going in off season certainly gives me an even greater respect for those that live there year round. It takes a tough cookie to weather those winters and keep your sanity. I'm pretty sure I couldn't do it. I was dying to wear t-shirts and flip flops after just 2 weeks, don't know how I'd do after 3 months!

One of the things that struck me about Co Donegal was the water- specifically the abundance of it. Waterfalls right by the side of the motorway, or cascading down a large hill behind farmhouses. It was so picturesque, I could have wandered those hills happily for hours. Such an unbridled landscape, to me it as just asking for exploration (with a good windbreaker and hat, of course.)

Very soon we found ourselves in the town of Donegal, which is much smaller than I thought it was going to be- it's a lovely little town with a fairytale castle at it's center- it's definitely worth a second look.

I got quite excited by this point because I knew we were getting nearer to our final destination of that day, as well as crossing the border between the Republic of Ireland and Northern Ireland. I was so curious to see if anything felt different and what kind of marker there would be at the border. With a mix of excitement and anxiety we crossed that great and very invisible line...

And with that thought, I'll leave you until next time.


Next up: Entering Norther Ireland and Derry/Londonderry.