Many of you follow A Beautiful Mess blog, as do I, soooooo you probably all saw their recent post about Emma's eggnog cinnamon rolls (original post HERE). Last month I was talking with a client at work and she was saying that she makes cinnamon rolls from scratch every year for Christmas morning. I was inspired! She promised to give me the recipe the next time I saw her but when I saw Emma's post I just KNEW this is was it! These were the cinnamon rolls I was going to make! Now, here's where it gets tricky- I have never made cinnamon rolls before! I was a little bit concerned that I was taking on a task that was too lofty! What if I single handedly messed up Christmas morning with not so great cinnamon rolls?! 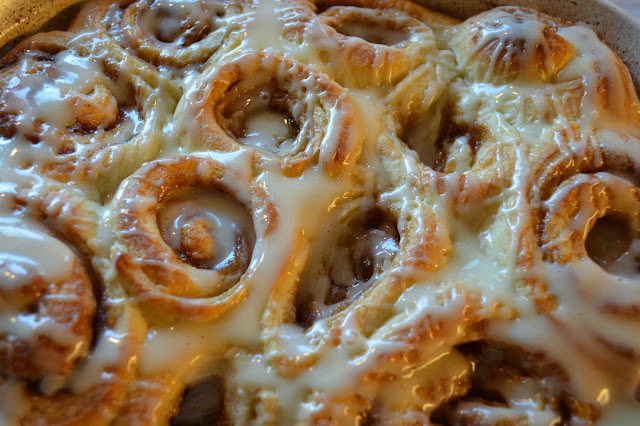 So here's my take. I did not tweak anything or try to get creative. Her recipe is awesome and there is no need to fiddle. So what am I bringing to this that's worth blogging about it if it's already been done? As a first time cinnamon roll baker I want to share my experience as well as add what I found incredibly helpful. Here's my tip: make the dough and assemble the cinnamon rolls the night before. Leave out assembled and ready to bake cinnamon rolls to to rise at room temperature and bake in the morning- makes it so much easier!! Who wants to get up early to make the dough and let it rise for 2 hours Christmas morning?!

Oh and when typing out the ingredients below I realized that I totally did it differently!! WHOOPS!! I did 1 whole egg + 1 egg white instead of 1 egg yolk!!! Guess that wasn't a big mistake because my rolls turned out amazing!!! But for the sake of keeping it the same follow their ingredient list. (See, first time cinnamon roll baker everyone, I told ya!)

Preheat oven to 350 degrees F. In a saucepan melt butter over low heat (be careful not to burn it!)  When melted remove from heat. Stir in milk, eggnog and sugar. Stir until sugar dissolves. Poor in yeast and stir. Set aside and let sit for about 8 minutes to give the yeast time to start working. At this point I would lightly oil a bowl and set aside before your hands get covered in dough.

In a bowl mix flour and salt. Pour in yeast mixture and stir. (It gets quite sticky). Mix in eggs. Knead on a lightly floured surface for 3-4 minutes. Place in previously oil bowl. Cover and let sit in a cool dry place for 2 hours. 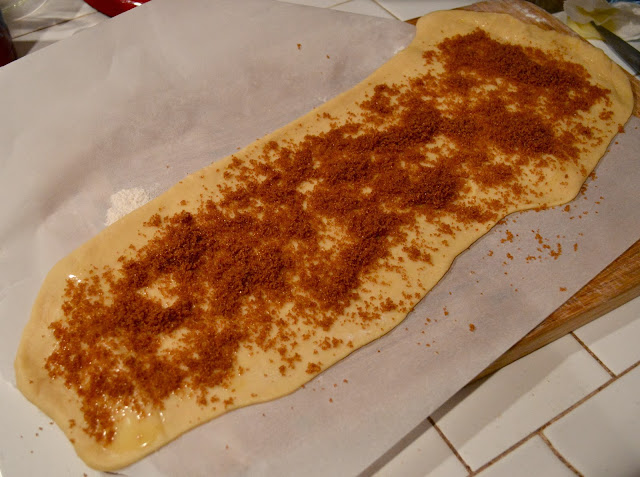 Now for filling. This is so easy my friends!! Place your cinnamon and sugar in a bowl and stir to combine. Wait to melt the butter just before you roll out your dough. 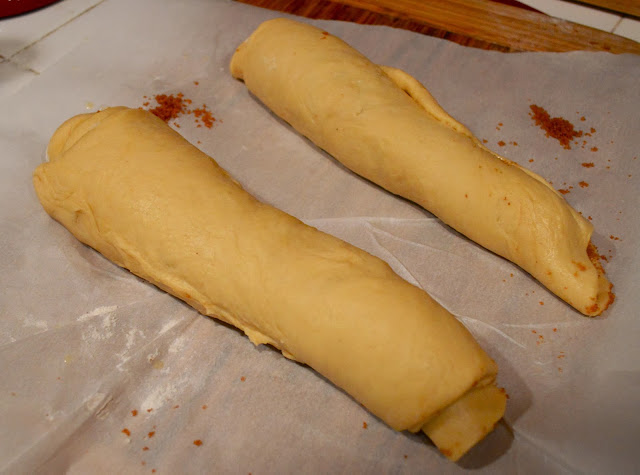 When dough has finished rising, melt butter. On a lightly floured surface roll out dough to about 1/4 into 1/2 inch thick depending on your taste. Brush the melted butter all over the rolled out dough. Sprinkle generously with the sugar/cinnamon mixture. Roll the dough and slice about 2 to 2- 1/2 inch thick pieces. Place these in a generously buttered baking dish. At this point I followed Emma's advice and used some of the leftover melted butter to brush over the tops of the rolls. 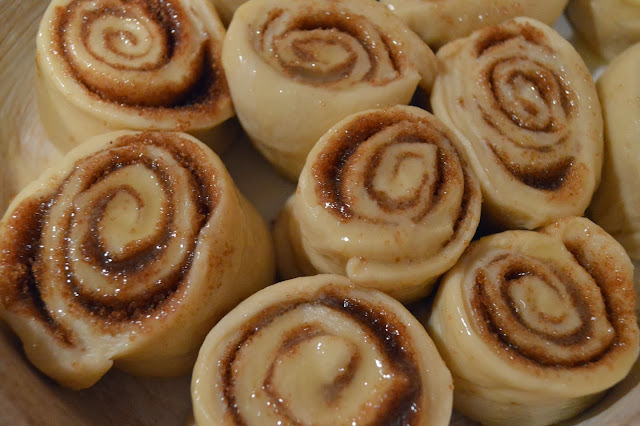 Bake at 350 degrees F for 25-30 minutes or until tops are lightly golden brown. Set aside to cool just a bit. 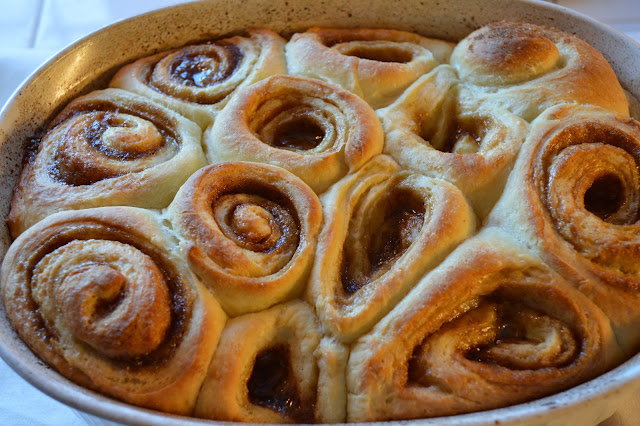 While rolls cool slightly make the eggnog icing. In a medium bowl combine powdered sugar, vanilla and eggnog and whisk until combined. Generously pour the icing over the warm rolls and you're ready to go!! 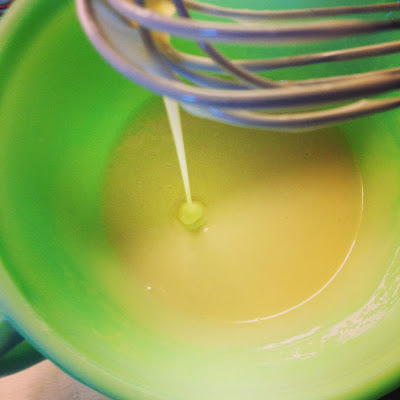 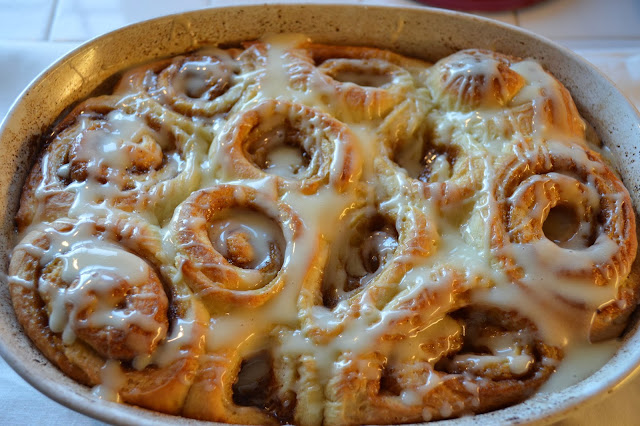 These were a HUGE hit friends!!!! Once again, thank you Emma at A Beautiful Mess for sharing this recipe!! 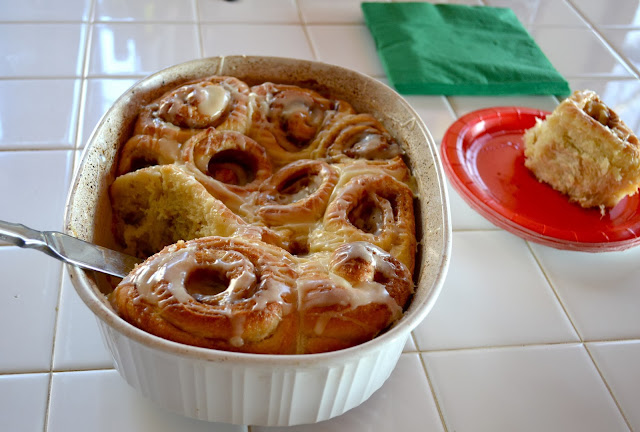 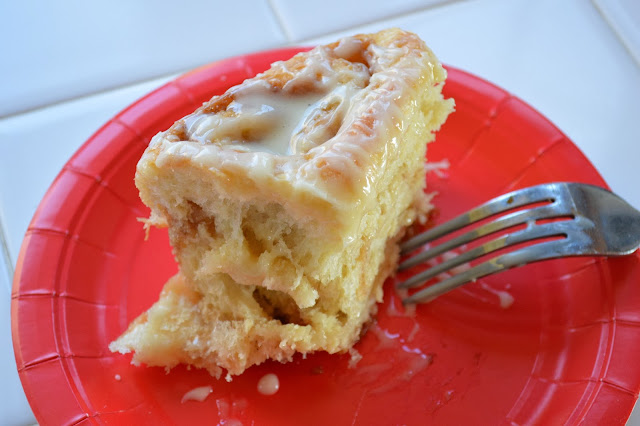