Aesop is an Australian skincare, haircare and body care company started in Melbourne in 1987. They have a bit of a cult following or so I've gathered while researching this brand.  I was recommended this product by some friends in the UK and while I had heard of it before I never bothered to try it because it's rather exclusive. To me if a product is sold in California only through Barneys department stores and a few stand alone specialty stores in San Francisco and Los Angeles, then that equals ex.pens.ive (they can be purchased online but if you want to actually sample the products you need to be in a largely populated area). Of course their best treatment products ARE well over a hundred dollars but they do have skincare products in the $40-50 range which is standard for good, non-drugstore products. I'm in desperate need of some hydration and I'm currently scraping the bottom of the jar of my moisturizer so I figured I'd branch out from my normal go-to and order some Aesop.

I thought about this long and hard- I researched, I watched YouTube reviews, read blog posts and did my darnedest to figure out which moisturizer was going to be best for me in this season of my skin. My skin is the driest its ever been, my face is flaky and so is my scalp. I've never had a flaky, dry scalp in my life. Strange things are going on weather wise and my health has been funky, which I'm sure is contributing to my skin's odd reaction. So this calls for a completely different moisturizer than I would normally reach for. I have normal to oily skin usually, but right now there's not a bit of oil to be seen. My skin is screaming for hydration! 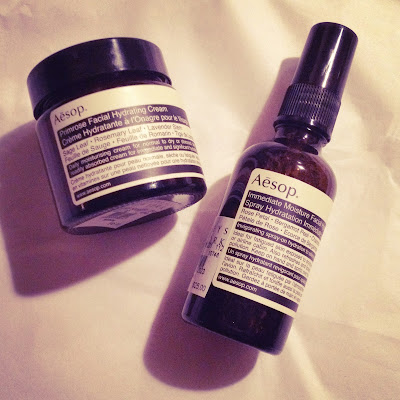 
I also purchased the Immediate Moisture Facial Hydrosol, which is a spay-on moisturizer for use in dehydrating environments like say, airplanes. And since we're going to Ireland in January I thought it best to get this product. I think I'll be needing it every 15 minutes on the 12 hour flight! Now for some bizarre reason last week this product was available on Aesop's website and now it's nowhere to be found.  I had to order it from Barneys, so if you decide to get it you might have better luck there.

First my review on the Primrose Facial Hydrating Cream. You guys if I could take a bath in this little jar I would. Like if I was mega wealthy and had no conscience I would buy this by the gallon and bathe in it. It's thick and luxurious. It smells strongly of lavender and feels slightly cooling when first applied (which could be my imagination by the way). My skin feels crazy soft and smooth after use. I'll probably end up breaking out because I keep caressing my own face. I'm already noticing a difference in the dryness in my face and it's only been a week of use. All in all it's five stars for this moisturizer for where my skin is currently at. If my skin returns to normal, this might become too heavy but for now it's heavenly.

Now for the Immediate Moisture Facial Hydrosol. This spray reminds me more of a toner than a moisturizer. It smells herbaceous and you can definitely detect the chamomile in it. I think this is going to work a treat on the plane to Ireland in January. I hope my fellow passengers like the smell of camomile because I predict a lot of spraying. This is not a daily item for me so I can't say anything about it's moisturizing capabilities but I can say that when I spray it I do feel instantly hydrated. It's very refreshing!

Well I'm trying to find a way to justify spending $29 on a bathroom deodorizer called Post-Poo Drops- really that's what it's called! This might sound weird and inappropriate but I really want to try them. Let's be honest, natures calls us all and we live in a very small house and anything that I can find to make that more bearable then I'll try it. Why not try to make living in close quarters as pleasant as possible?

I also really want the Ginger Flight Therapy roll on. I'm a seriously anxious flyer and a nervous traveller in general. Yes, I'm the lady who's hyperventilating if her flight's delayed or she can't find her luggage- I'm a total stress case, much to my easygoing traveling husband's chagrin. I predict this little bottle will be gone from four flights, 3 different airports, a car rental and the kenneling of a dog.

Also on my list of wants is the Tuberose Lip Heal oil. I totally get dry, chapped lips in winter and I feel like this could be the perfect solution.

Quick, someone get me a gift certificate before I blow our savings!!!