Eclair Bakery- Can I Get an Amen?! 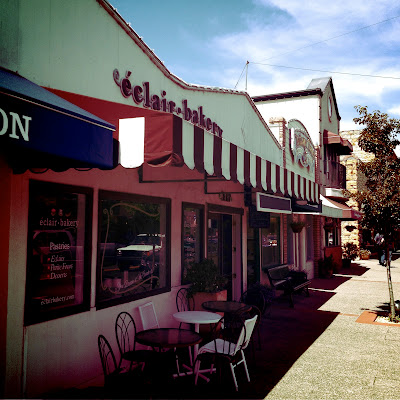 A talk to the man who makes this joy happen!


I'm a teensy bit biased about this particular place, but rest assured that if I really didn't like it I would never do a post about it. With that out of the way let's talk pastries! Ooo, and cookies! OH and the bread!!! Oh my gosh- I'm getting ahead of myself here!!!

Let's start at the beginning, as you always should. There's this guy, okay he's not just a guy he's a friend- and this friend happened to move to the great city of San Francisco. Wait! I should start back even farther- so Jeremy Davenport lived in little ol' San Luis Obispo before he moved to San Francisco and while living here in SLO he worked at Boo Boo Records, but he also had stints in the food industry at both Gus's Grocery and Cisco's which were signs of things to come! Lots of non-food related things happened in his life but then he moves to San Francisco and goes to California Culinary Academy, an affiliate of Le Cordon Bleu.

While in school he found himself drawn to pastries and plated desserts. And thank goodness for that- or we may not have the masterpiece that is the dipped chocolate cupcake- but I digress! While in San Francisco Jeremy worked at Moose's in North Beach, honing his culinary skills.

Fast forward a few years, a move back to SLO County, a marriage, a stint at both the Bacara Resort in Santa Barbara where he apprenticed under the Executive Pastry Chef and at a winery/bed & breakfast in Paso Robles. All of which transpired in the years leading up to the big purchase! Jeremy purchased Eclair Bakery, an already established business in the Village of Arroyo Grande in July of 2006 and has made a success of it ever since!

When I first personally discovered that Jeremy could walk the talk was when he made my wedding cake. We'd been friends for years at this point, but I have never experienced his culinary skills. I asked for a very simple cake: I just wanted vanilla cake, and buttercream frosting. I left the rest up to him. He asked a few questions- I sent a pic of how I wanted it decorated and voila! My perfect cake! It was out of this world my friends!! He did a simple vanilla cake, with bavarian cream filling and fresh sliced strawberries, topping it off with an amazing buttercream frosting! It was just the right amount of sweet and rich! When you can get something that simple right, you've got a good thing going!!! It's still the best cake I've had to this day!


Jeremy allowed me to invade his space for an afternoon early this summer. He was kneading dough like a champ while I fired out questions at him! Talk about a multi-tasker!

Here's what he had to say.

A lil' somethin', somethin' about a man and his bakery:

I noticed awhile back that Jeremy had started featuring delicious fresh baked breads (which sells out quickly my friends!!!) and homemade quiches along side his pastries, so of course I had to ask him about it.


CUOB: What made you decide to add savory items to your menu?

Jeremy: I've always done quiche here and there. There was a demand for it. It had been awhile since I had done savory stuff, we used to do Breakfast Club on Saturdays, but then it got too busy on Saturdays to continue doing the Breakfast Club. So basically it was customer demand that brought back the savory.

CUOB: What is your most popular item at the bakery?

Jeremy: Besides the bread, the chocolate dipped cupcakes-those are really popular, and cakes. We get a lot of orders for cakes.

CUOB: During wedding season how many cakes do you take on per weekend?

Jeremy: Depending on the size of cake we can do a few. If it's a really large cake then of course we can only do so much on top of that. With Sandy here (his trusty assistant!)- she has really become the "cake lady", she does such a great job!

CUOB: Are you sick of eating pastries at this point? Are you over it?

Jeremy: I have my favorites. I go through different cycles. It's like one week I have to eat the double chocolate cookie - that's my favorite cookie- but then there's other times where it's like I need a muffin top right now!

CUOB: Do you do vegan and gluten free options?

Jeremy: Yes! The double chocolate cookie is vegan. We do some for the case, but typically we get a lot  of special orders.

CUOB: I heard a rumor that you might start offering bread at Farmer's Market?

Jeremy: Yeah, we're exploring that option. (for the record, Eclair's does both the San Luis Obispo Farmer's Market and the Arroyo Grande Farmer's Market with hopes to branch out to more in the county- cross your fingers Los Osos and Morro Bay- Eclair Bakery could be coming your way!!)

CUOB: On a good night at SLO Farmer's Market how many items do you sell? Have you ever sold out?

Jeremy: During Summer in SLO we almost always sell out. On a good night we sell anywhere from 50-60 eclairs. Arroyo Grande Farmer's Market we always sell out. Last weekend we sold down to almost nothing within the first half an hour.

CUOB: What's your vision for the future of the bakery? Or are you basically where you want to be with it?

Jeremy: It's ever evolving. In terms of decor I always want to change it, but it's hard to find the time. In terms of product, I really want to start doing- well obviously the bread. I'm getting so much bread business and so many requests for it. I want to get that more developed. We have such a great team right now, with Sandy working on cakes and being super creative and her daughter (Alexiss, who works at Eclair too) being creative as well doing hand made flowers and shells. I'd love to expand and open up another shop, as well as doing cakes for the case. It's just always ever evolving and changing, different trends that come and go- you try to stay on trend but stay true to yourself too.

***
Well Mr. Davenport, I for one am hoping for a Morro Bay store (hint, hint!) or least the Los Osos Farmer's Market! Can I just say loyal readers that not only was my wedding cake the BEST I've tasted but his chocolate chip cookie is hands down above all others I've had and the chocolate dipped cupcake is sinfully delicious!!!! I have the photos to prove it, so let's take a little taste bud tour!!


Thank you for letting me invade your space for an afternoon Jeremy, it was awesome to get a behind the scenes look and pick your brain!!

How can you experience Eclair Bakery for yourself?! 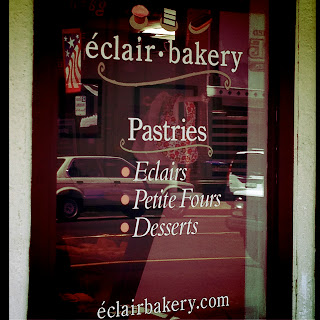 For all of you SLO people or frequent visitors to Farmer's Market- Jeremy and Eclair Bakery can be found there pretty much every Thursday night located on the block of Higuera somewhere in front of or the vicinity of Mother's Tavern (MoTav as they call it now- ugh, don't even get me started on the name!)

Stop by, say hello, buy an Eclair and tell him you heard about it here!