It's finally time to sit down and write the cruise post! I've been gathering photos and making notes of memories, scanning through my head- tossing out the mundane- I really don't think you want me to wax-poetic about the freaking amazing limoncello cake. I've told the stories so many times now, I'm beginning to bore myself- but alas my friends, it wouldn't be fair of me to ignore you and leave you out of the loop!

A little background about myself and my idea of a good time. I am a voracious reader, lover of good food and sad songs, an artist, an introverted person sometimes masquerading as an extrovert. My idea of a good time usually involves sitting on the couch reading and drinking coffee, or a quiet movie date with my husband, an afternoon on a secluded beach or a lunch date with a friend/small group of friends. Outside of my work I live a very quiet life and that's just the way I like it. So what on earth would possess a girl like me to go on a cruise?!? One word (okay, two): My Sister.

My sister and I are opposites- she's an extrovert who thrives on large, jolly groups of people. She's totally at ease with strangers, always up for a good time. She's a good time gal, as I like to say and there's nothing wrong with that!! I knew that going on this cruise would take me out of my comfort zone, but I also knew I'd have my big sis along to ease my anxiety and take the reigns of this trip. Between my sister Sarah and her BFF Marie, I knew I could just sit back, relax and have everything of the social variety taken care of. Without those two ladies I wouldn't have had nearly as much fun, nearly as much alcohol and or the experience of very little guilt about a table laden with food. Let's digress for a moment and just acknowledge how gratifying it is to be on vacation with people who love to pig out  sample food as much as you do!!

So here's a little pictorial of what I dub: The Floating Vegas or Vegas On The Sea.

After a several hours of driving and many hours enduring the check in process (much like an airport nowadays) we finally boarded the ship. The above picture is the only picture of the 3 of us together. I feel this picture perfectly illustrates my view of the cruise before it began- naive little ol' me with my eyes closed to the Vegas-free for all attitude of this Mexican cruise.  I mean, honestly, I should have known!!

After boarding we tried to settle in, but it quickly became apparent that something was amiss with our luggage. We had been forced to check it (the first of our many complaints with Carnival Cruises) and the wrong room was put on our luggage tags. It took us hours to figure this out, which also meant that for hours we were stuck in our travel clothes with nothing and I mean nothing but our travel clothes! Ugh, no freshening up or change of clothes for us!

I will admit that after dinner that night I retired to our room and read in my pjs. Yes, I'm an old lady and yes, I'm happy with it! Sarah and Marie went off like the troopers they are and had a grand old time until the wee hours of the morning! Evening one of the cruise= success for all!
Day two and I'm on my own for the morning. While Sarah and Marie debarked the boat in Ensenada, I stayed on to have a leisurely morning to myself doing the things that I find relaxing. I had decided long before we stepped onboard that ship that I was going to have three things on my agenda: reading, exercising and food. I set out to tick everything off my list that morning. I split from the girls and encountered a man selling bottled water. I was delighted to find this man, as I knew I was planning on doing some sweating and running back and forth to the dining hall for small cups of water was not going to cut it! I grabbed my bottled water and he asked if I was planning on going into port. When I answered in the negative do you know what that man said to me? He said, "Smart girl! It's dangerous out there! You just stay on the boat and go to the gym!"  See guys?! I'm an old lady for a reason- it's dangerous out there! Haha!!!


Saturday night rolled around and the crazies were back on the boat. We changed our dinner time from 8:15 to 6:15 (total drama surrounding that- no need to mention it but let's just say Carnival Cruises DOES NOT have good customer service!!!) and met some amazing girls! Half of our table were crazy nurses that made even my sister blush- the other half were Kenna and Caitlin, two fun best friends from San Diego. They were my kind of gals- just there to relax, get massages and eat food! We ended up hanging out with them all night, going first to karaoke where we witnessed truly bad singing partnered with people who should have recording contracts and then on to the comedy club where the last comedian made me snort.


A fantastic Saturday was had by all!

Sunday we were out to sea for the whole day. It was an interesting day on this trip- as the party animals were all stuck on the boat, nursing hangovers and dodging screaming children. One such party animal was a young guy named Jorge. Sarah and Marie had first encountered Jorge at Papas and Beer while in Ensenada. He was the "masked man" that I heard them talk about endlessly. It became their mission to find him "unmasked" on Sunday. Our guy, Jorge had many identifying tattoos so it wasn't too hard to spot him, especially since it seemed that he was allergic to wearing a shirt. He was eventually found and then seen numerous times on Sunday- once you spotted him you couldn't help seeing him pretty much everywhere!


More food, more alcohol and then the hilarious experience of watching drunk middle aged people dancing to Motown classics. Another night of karaoke this time featuring Jorge- yes, that Jorge as an impromptu MC, taking over the mic from anyone and everyone! I retired early once again, this time because the motion of the boat was making me feel ill. My only regret was that by going to back to the room early I missed out on the comedy club and hanging out with our friends Kenna and Caitlin. I will forever wish I had gotten their contact info, as I feel like I missed out on the opportunity for long term friendship with those gals. Oh well, they sure were fun while I knew them!!

I know I'm leaving stuff out or forgetting things, but if I include each and every thing this could get longwinded and a tad boring- so I'll leave you to fill in the holes. Just know there were numerous bachelorette parties on board, surprisingly few english speakers, endless trips to the buffet, groups of men in silly skintight bodysuits, hilarious African American women discussing the unspoken rules of bikini wearing, hairy chest contests, $17 drinks, overheard conversations of bad relationship advice involving the aforementioned bachelorettes, an awkward moment of being propositioned in the elevator, and lots of bonding for the three Amigas!

Am I in a hurry to do it again? No. Will I look back on it fondly? Yes. 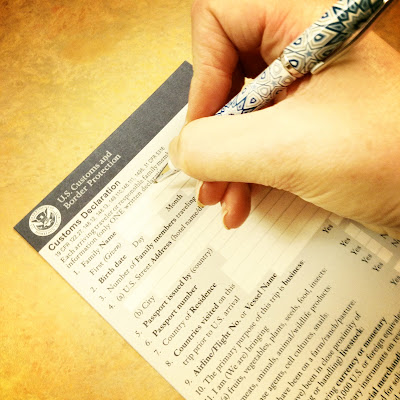