A Little R&R In Santa Cruz

We all have that place we go when we need to recharge and be in a familiar environment that isn't our home. That go-to place for me and my husband is often the coastline between Monterey and Santa Cruz. That corridor of Hwy 1 is as familiar to us as our own neighborhood. So, when it came time to rethink our vacation at the last minute and try to salvage what was left of our time off we immediately decided to splurge and stay at the Dream Inn in Santa Cruz. 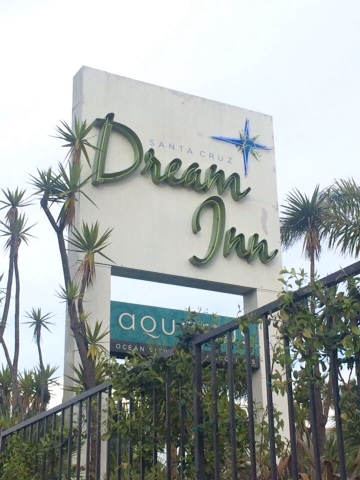 But first I won't even think of going to that neck of the woods without stopping at The Whole Enchilada. Opened in 1981 The Whole Enchilada is a family business started by a husband and wife team. The last two times we've dined there the owner, Rey, has stopped by each table and asked how we're enjoying our food and where everyone is from. It's a kick to listen to him chat with regulars and then watch him hop onto his bicycle riding off to town.

We had a great table in the sunroom with a view of the little harbor across the road. I always order the same thing when I go but Daniel likes to branch out and try new things. I don't think he's had the same thing twice, and he's always been happy. I get the combination plate with 1 cheese enchilada and 1 shredded beef taco- delicious every single time! Daniel got the shredded beef quesadilla. The free chips and salsa hit the spot also. Their salsa can clear your sinuses in a jiffy, which was helpful considering we were both suffering from a nasty cold. 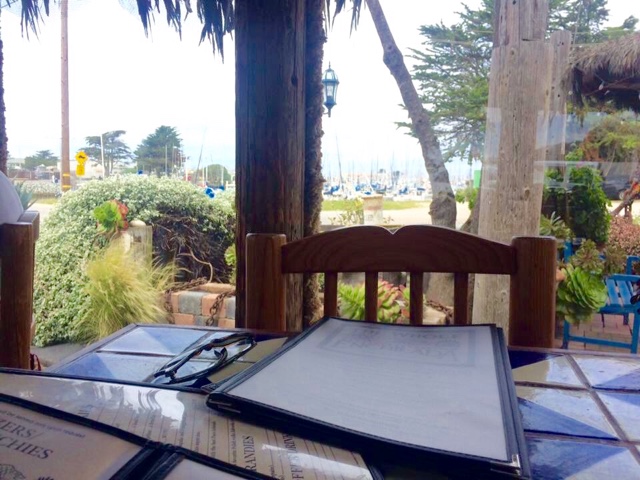 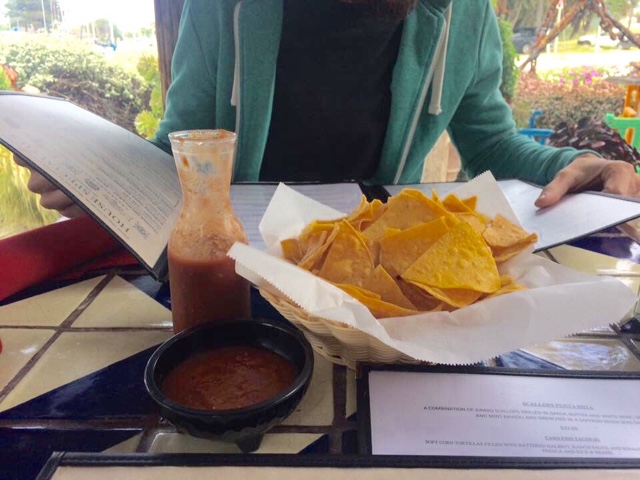 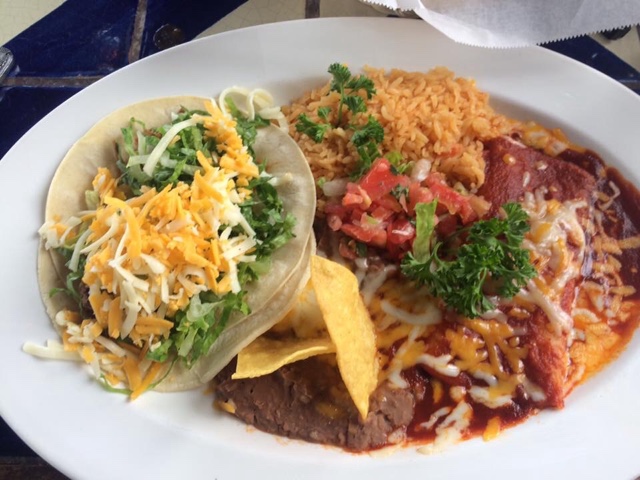 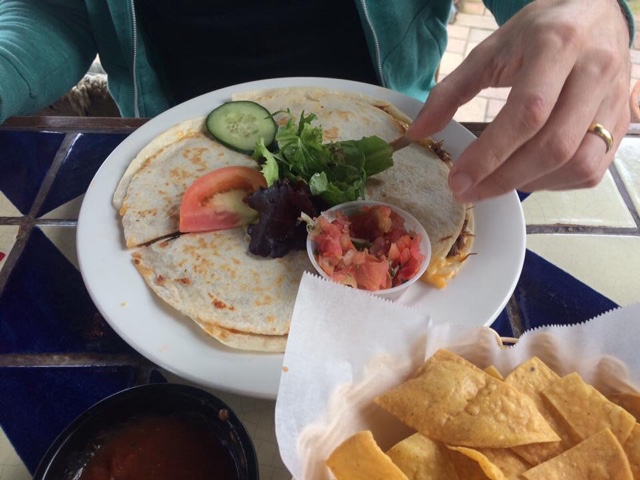 After a truly delicious lunch we bought snacks (of the healthy and unhealthy variety) from the large fruit and veggie stand (which also has candy!) next door and set off for Santa Cruz.

We've stayed at the Dream Inn many times over the years, most memorably for our honeymoon. When we first started staying there it was called Coast Santa Cruz Hotel but the named was changed back to it's original Dream Inn when it was bought by the Joie de Vivre chain around 2008- they sold the hotel to Woodside Hotels, a Northern California based company in late 2016, who then embarked on a remodel that was winding down when we stayed. It's a splurge for us to stay there but it's been worth it every single time. 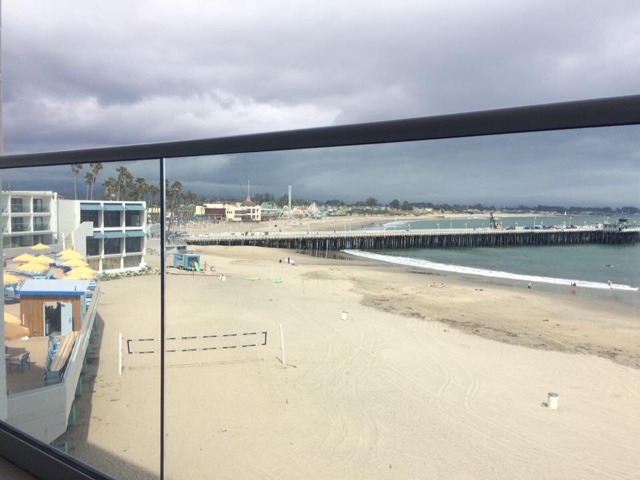 The view from our balcony. It was gorgeous in person. 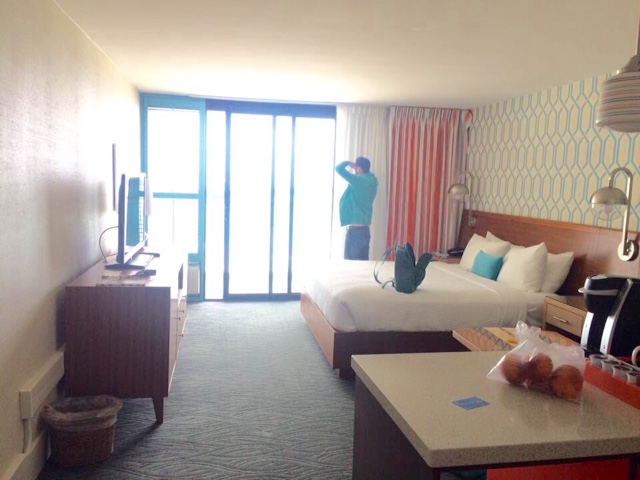 Our bright and cheerful room at the Dream Inn. Room 324. 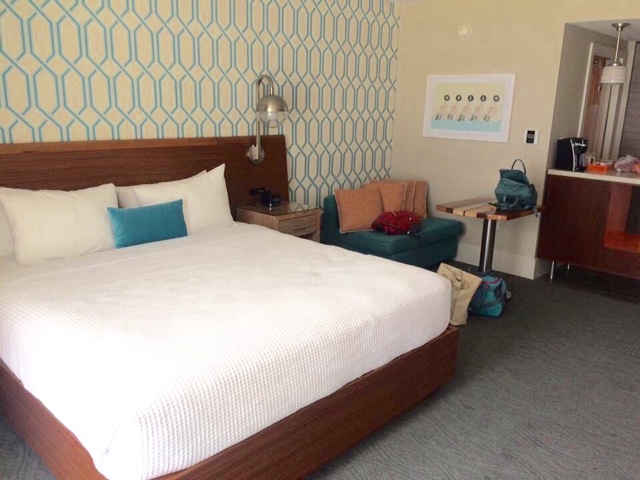 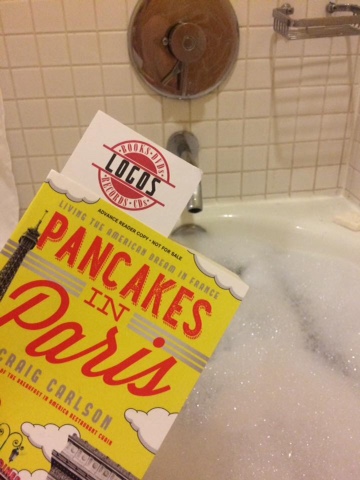 Have Lush, will travel!

I have a few things that are always on my to-do list when we find ourselves in the Santa Cruz area (besides The Whole Enchilada). The first place we go in Santa Cruz  is Logos Books & Records located on Pacific Ave. It's a used book and record store opened in 1969. I always come away with inexpensive, interesting books. I got lucky this time as two books that were on my to-read list were found on the bookshelves of Logos and at a good price too! I read all 3 books purchased at Logos before heading back to work and am all the richer for it!  (*book titles and links listed at the end of this post.) You're guaranteed to find a treasure on their shelves.

Another item on my list for Santa Cruz is getting an amazing ice cream from Mission Hill Creamery, also on Pacific Ave. The biggest compliment I can give them? I can eat their ice cream with no digestive consequences. If an ice cream isn't made with quality ingredients my stomach will know right away and I'll pay for it. I have to be very picky about where I eat ice cream from so I don't eat it very often. I'm actually grateful that I don't live closer to Mission Hill Creamery (or McConnell's in Santa Barbara for that matter) or I'd be fighting the temptation all of the time and probably losing! 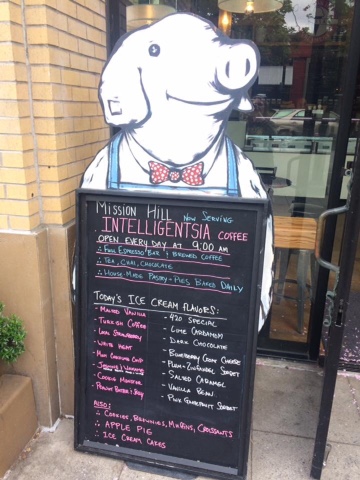 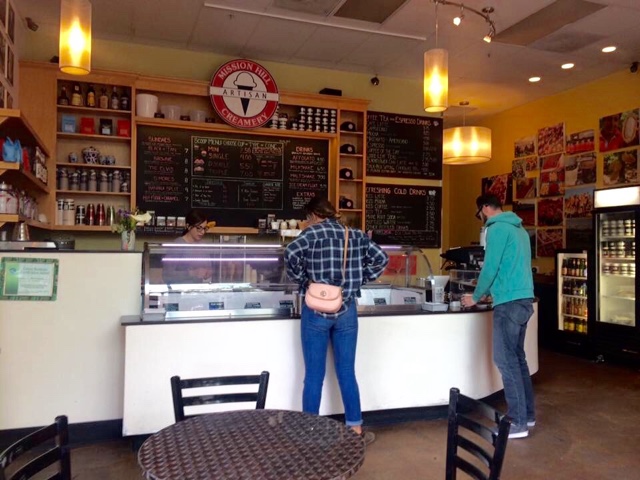 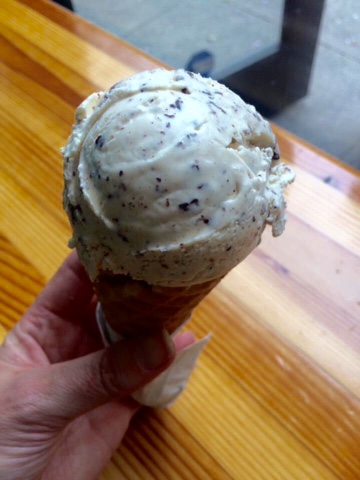 Waffle cone with one scoop of mint chocolate chip. SO good!


We rounded out the day wandering Beach Hill and checking out the historic houses. Daniel and I both love the Queen Anne style (think the Munsters house) so when we saw the Golden Gate Villa (located at 924 3rd Street) from the street below, we knew we needed to get up the hill and check it out. The first thing we noticed about the Golden Gate Villa the from the street below is the door that opens to nothing on the back side of the carriage house. I mean, it literally opens to a cliff! What the heck? I've been researching and researching and can't find an answer to this door. Did it used to have a staircase to the street below? Did part of the hillside collapse? Is it a case of purposeful deception à la Sarah Winchester? If anyone knows the answer to this I'm dying to know!

Registered on the National Registry of Historical Landmarks in 1975, the Golden Gate Villa, designed by Thomas J Welsh and built in 1891 for Major Frank W. McLaughlin was the scene of the tragic murder-suicide of Major McLaughlin and his step daughter Agnes (who he adopted as his own when he married her mother Margaret).  His wife's death in 1905 sent the Major into mourning which was compounded by the fact that he was secretly having financial troubles. Fearing a life of poverty he plotted to murder his beloved daughter while she slept and then he killed himself to spare them both a life in ruin. There was speculation even at the time of the tragedy that the Major was in love with his step daughter, who had had two failed engagements and that that was the reason he chose to murder her instead of committing suicide and leaving her to inherit what was left of the estate. Regardless of his reasons, on November 16, 1907 the two year anniversary of his wife's death Major McLaughlin shot Agnes through the temple while she napped and then swallowed a fatal dose of potassium cyanide. I didn't know any of this as I gazed up at the 22 room 10,000 square foot 3 story home, but I knew I loved it! (I have since found out that one of the apartments inside the house is on Airbnb! Maybe someday we'll stay there!)

My favorite house on Beach Hill is the Eastlake Cottage, built in 1887- which you can find across the street from the Golden Gate Villa at 1005 3rd Street. Unlike its grand neighbor the raised basement style Eastlake Cottage (also called the Whittle House) has no tragedies attached to it that I know of. It was built as a summer house for John Hart, a San Jose merchant and his family. How lovely it must have been in that time- I imagine it would have had unimpeded views on almost all sides.

On the corner of 3rd and Main Street sits the oldest family residence on Beach Hill, the Eben Bennett Home, built in 1871. Built in the Victorian-Italianate style for Eben Bennett a man whose money was made in the lime, mining, and road building industries. It's not a style I particularly like but I couldn't help but take a look and admire it. We ended our little self guided historic homes tour with the West Cliff Inn across the street from our hotel on West Cliff Drive. The West Cliff Inn is originally the Lynch House and was built in 1877 for Sedgwick Lynch and his wife Jane. At the time it was built it was the second largest home in Santa Cruz. The Lynch House became a luxury bed and breakfast in 2005 and is decidedly out of our budget! 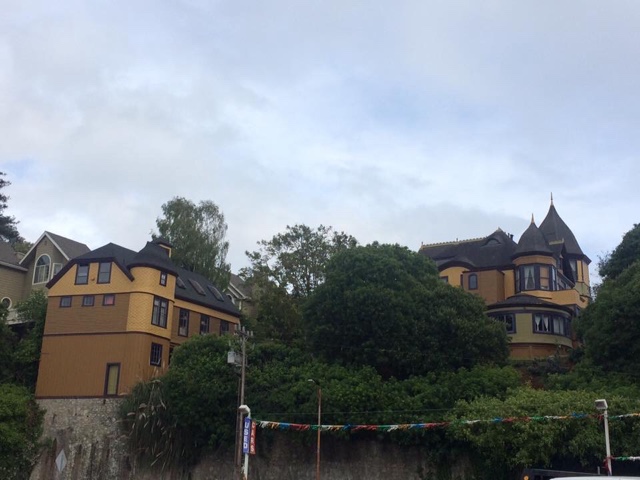 Our first view of the back of the Golden Gate Villa and it's carriage house. You can see the incredibly perplexing door that leads to nowhere at the bottom right of the carriage house. 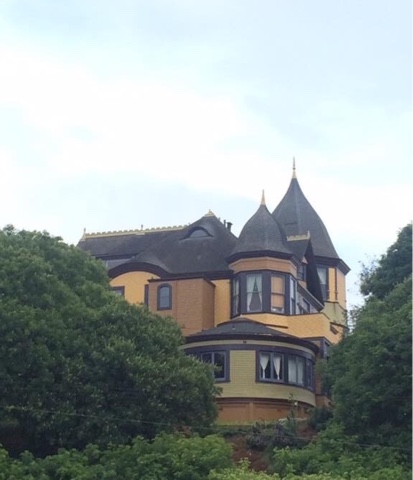 Love the details, turrets, towers and curves of this house 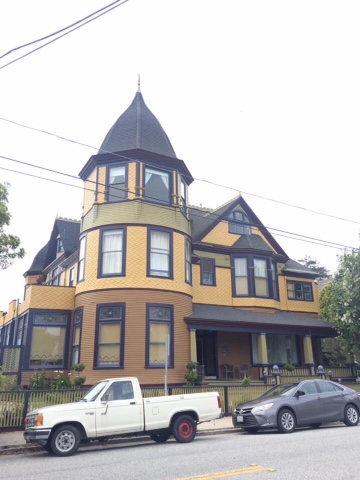 The Golden Gate Villa from the front. I'm not sure what the original colors of the house were but I've seen quite a few photos of it painted white with blue accents. Not a huge fan of the golds and greens it's currently painted but I didn't pay for it so my opinion doesn't matter now does it? 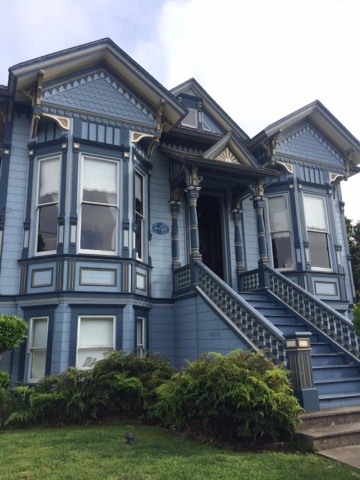 The gorgeous Eastlake Cottage. This house is painted with 6 different colors. 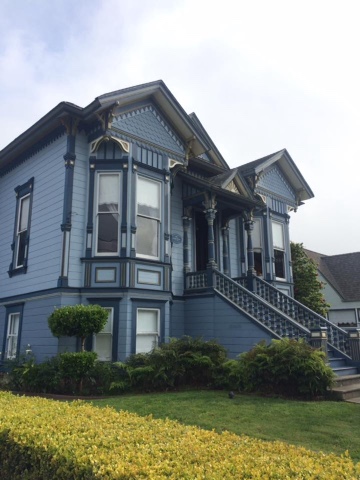 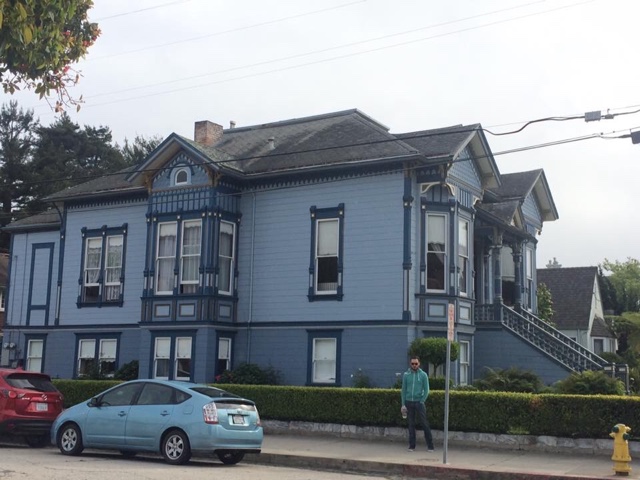 My patient husband waiting in the drizzle while I obsessively took photos of the houses. How glorious is that window on the Eastlake Cottage? 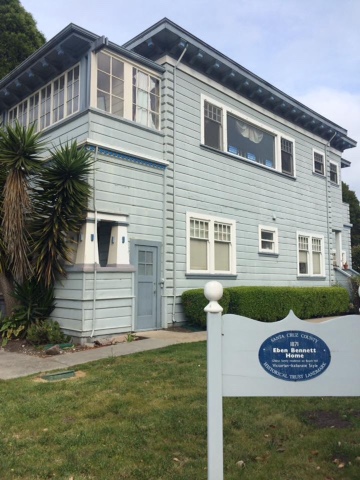 The Eben Bennett House, not as opulent as the surrounding homes but large and grand in it's own way. 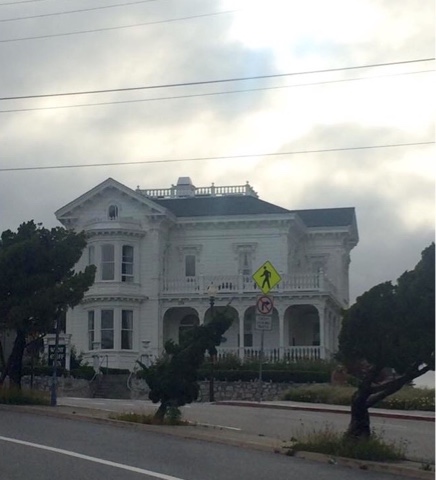 
At this point Daniel's cold was at it's worst and I was starting to come down with it myself so we took our tired feet back to our hotel to enjoy the ocean view, a bubble bath, and the superbly comfortable king sized bed. The Santa Cruz mountains and Big Basin State Park awaited us in the morning.