Daniel once teased me about having Hobbit feet- which I absolutely have the opposite of- he was just trying to get my goat and watch my reaction. It has now become an inside joke. However, I am a Hobbit in all other ways though- I love second breakfast, I love staying at home in my hobbit hole, the Shire is in my heart, and like Bilbo, I ocassionally go on adventures. Why am I bringing up Hobbits and Hobbit feet? Well, you'll just have to wait and find out...
After Salisbury we hopped back in our little rental Golf, queued up the GPS, and hit the road. Destination: Bath. Or as Daniel kept reminding me "Baaaaaath"- with the loooooog A. We were behind a white Audi with "COO9ER A" on the vanity plate almost the whole way from Salisbury into the city center of Bath. When you follow someone on winding country roads for many multitudes of minutes you start to create a story- or at least we do. We decided "COO9ER A" was a wealthy Doctor on his way to play a game of bowls in his crisp white pants to go with his crisp white Audi. 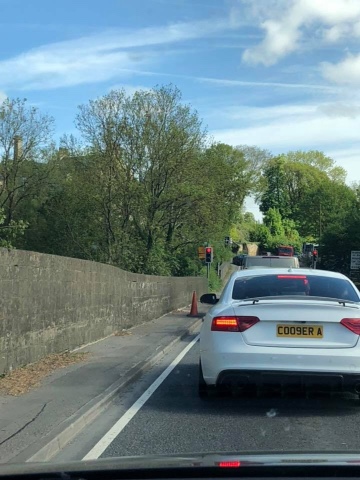 We were in Bath in search of coffee. It was just meant to be a quick stop. And it was a quick stop, which kind of kept extending because you see, I fell in love with Bath.
We parked at the Bath Cricket Club and walked the North Parade Road that crosses over the River Avon and towards the Bath Spa railway station because we knew where there were trains there was coffee. I believe there was a little divine intervention in where we parked. We had tried to find parking near the railway station and had we done that, it truly would have just been a coffee stop and I woudn't have seen the beauty that is the city centre of Bath. Fortunately for me we didn't find parking at the station, which is why we found ourselves at the Cricket Club and now wandering the streets of Bath aimlessly in search of a Costa Coffee. 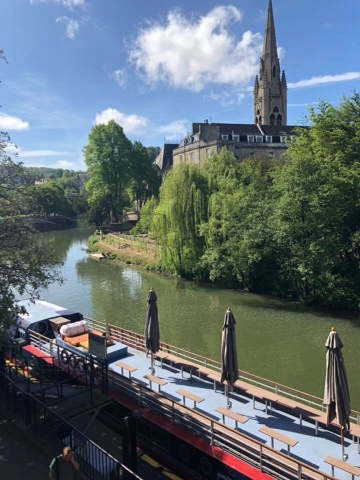 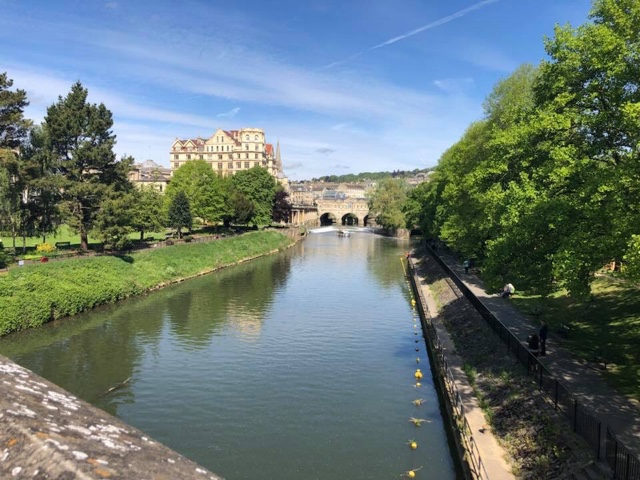 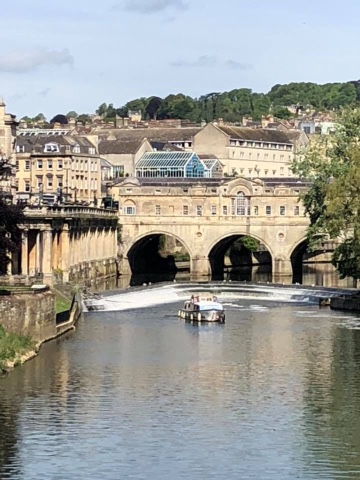 Pulteney Bridge, built 1774
We found a Costa Coffee inside the Debenham's Department store which was located in the SouthGate shopping center. You have no idea how much self restraint it took to just walk past all of those shops. If I'd been on my own I would have been there for hours going into all 50 stores. I decided to take pity on Daniel and not even mentioned it. Well, I lie actually- I tried really hard to go into AllSaints- the only thing that stopped me was my very full cup of hot coffee and Daniel's beseeching look that said, "you already own a leather jacket, please walk away". His presence did save us a lot of money that day.
Being in Bath made me positively giddy. Have you ever been to a place that just lights your insides on fire? Like, in a good way? That was happening in a big way.  Also, the bottoms of my feet tingle in situations like this. Maybe that means I have a neurological disorder? But I digress... This has only happened to me on this level once before, which happened to be when I was in Ireland. I got the giddy feeling with tingly feet bottoms when I saw Hore Abbey from the hilltop of The Rock of Cashel. I got myself down that hill and literally ran to it, dodging cow pies as I went. I just needed to be there- to touch it. The feeling in Bath was similar because it was just as unexpected. The funny thing is I didn't even care about going to Bath and actually told Daniel we could skip it. I felt like it was going to to be a tourist trap and I just wasn't interested. Well, Daniel knows me better than I know myself sometimes. He knew I would like it. He didn't know I'd get tingly feet and act like a crazy lady who'd suddenly taken some uppers who wanted her picture taken in front of every structure in the city though.
We were standing on the bridge that spans the River Avon and I informed Daniel that my Hobbit feet were tingling. It's like my insides want to plant roots and I get a physical sensation. He said that the West Country is Hobbit country so he wasn't surprised at my reaction. He kindly indulged my weird fancies (I mean, he's been with me for 18 years- he knows what he's in for) and he allowed himself to be led around Bath by a woman who kept saying, "Take a picture of me in front of this!", and "My Hobbit senses are on full alert."  I proudly posed in front of the souvenir shop, Jacks of Bath, where I paid a ridiculous amount of money for a t-shirt, tote bag and fridge magnet. Bath is the land of Jane Austen, Roman Baths, Georgian architecture and my baking hero, Mary Berry. What's not to get giddy about? 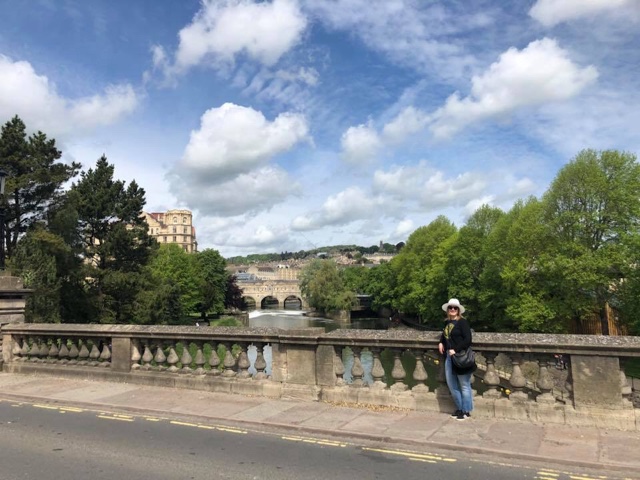 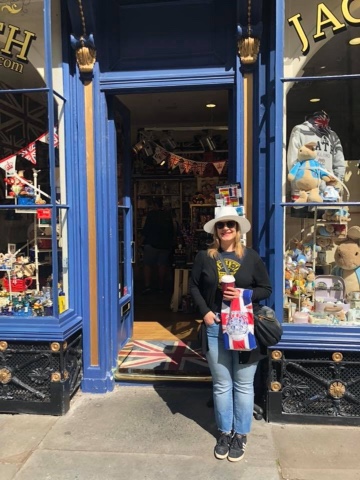 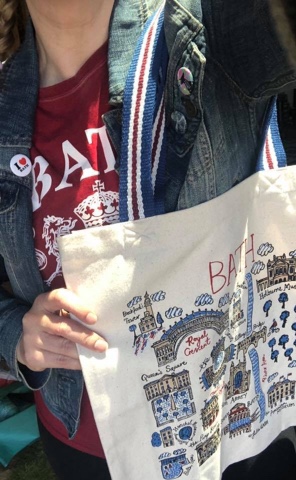 Excessive? When I'm in, I'm ALL in!
Way back when I was in High School my grandmother (who has since passed) went on an Elder Hostle trip to England. She knew how much of an Anglophile I was so she gave me the map she used to make her journey. I used to pour over that map and trace her journey with my finger, as though I was going along with her. Her favorite place on that trip was Bath. I remember her talking about it, wistfully recalling what the town was like. She also came back from that trip with a taste for tea with milk- she was the very first person to serve me a steaming cuppa milky tea. Walking around Bath and remembering that it had been her favorite place just made me feel even lighter and happier that I felt the same way. For that moment I was re-connected to her, feeling her presence. The last time I felt her presence that strongly was many years ago, also in England, sitting in the cathedral in Sheffield six months after she'd passed. We were there just touring around and decided to sit in the pews. I just sat for a quiet moment and started crying. Daniel was so perplexed because I had been happy just a few minutes earlier. I told him that my grandma was there- it was so overwhelming. Well, here she was again, no tears for me this time just happy feelings! I went into Jacks of Bath and picked out the magnet I thought she would like best and got the same one for my mom as well. 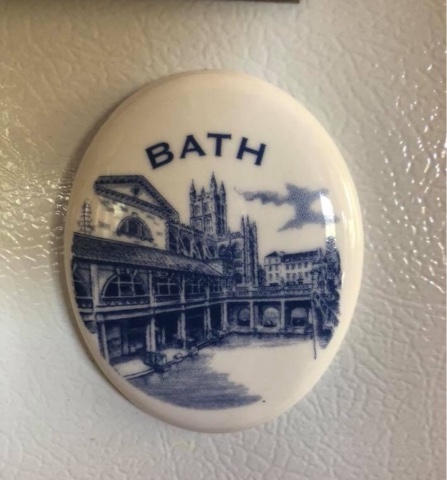 Nestled in the valley of the River Avon, (not to be confused with the River Avon that runs through Salisbury), it was settled by the Romans around 60AD. They built baths utilizing the natural hot springs and built a temple in the valley. Then known as Aquæ Sulis (Latin for "the water of Sulis"), the Romans were settling where Mesolithic hunter-gatherers had already made their home thousands of years earlier. Sulis, a local goddess of the Celtic tribes of Bath became merged with the Roman Goddess Minerva when they built their baths and dedicated the temple to Sullis Minerva. Roman occupation lasted until the 5th century at which time the baths fell into disrepair. They were eventually lost as a result of rising water levels and silting, not to be rediscovered until the 18th century.
The name Bath comes from the Saxon word: Ba∂um, Ba∂an, or Ba∂on- which means "at the baths". The "∂" symbol equates the to the "th" sound in English. It wasn't formally called Bath until Queen Elizabeth I granted the city a royal charter in 1590.
Bath Abbey is the third incarnation of a church occupying it's current site. Firstly an Anglo Saxon monastery stood from 757 AD to the time of the Norman Conquest when it was pulled down to make way for a massive cathedral. This cathedral stood in ruins by 1499 and was rebuilt and restored on a much smaller scale until the the Dissolution of the Monasteries in 1539 caused a decline yet again. The dissolution denuded it of it's lead, iron and glass and left the grand building to decay. It took Queen Elizabeth I to bring the church back to it's glory. She promoted the restoration of the church and ordered a national fund to be set up to finance the work. More restoration work was carried out 277 years later by Sir George Gilbert Scott, who's work on the Abbey is what we see today. We only saw the Abbey from the outside on this visit but already have our next visit to Bath planned. 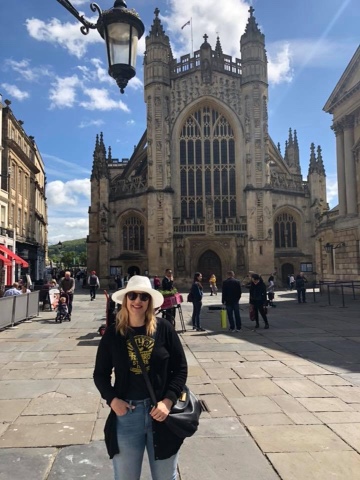 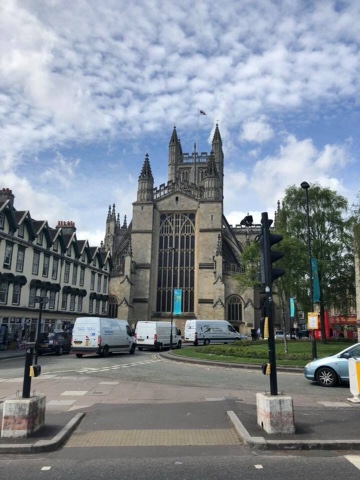 Bath Abbey as seen from the Parade Gardens
At this point we strolled back to the car by way of the Parade Gardens. I made Daniel promise me that we would return to Bath and give it it's due. I wanted to stay so badly to explore the Roman Baths, the Cathedral, the Jane Austen Museum, stroll through the Parade Gardens and walk along the River Avon, but we had an itinerary that day which included the Costwolds and booked accommodations that we couldn't cancel. Oh how I wish we hadn't pre-booked our nights accommodation and stayed in Bath, I just wanted to breath it's air. 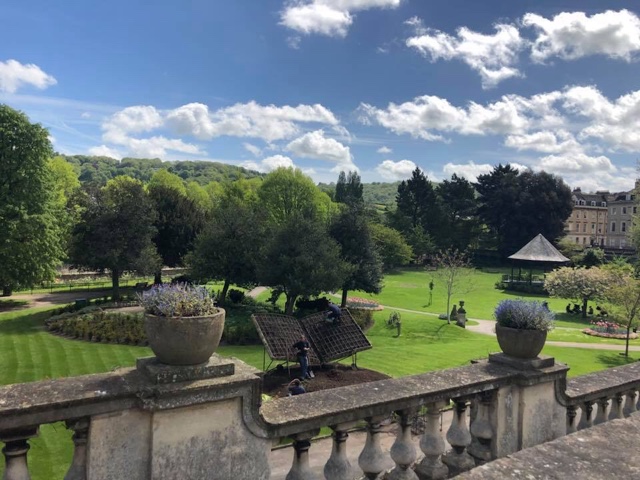 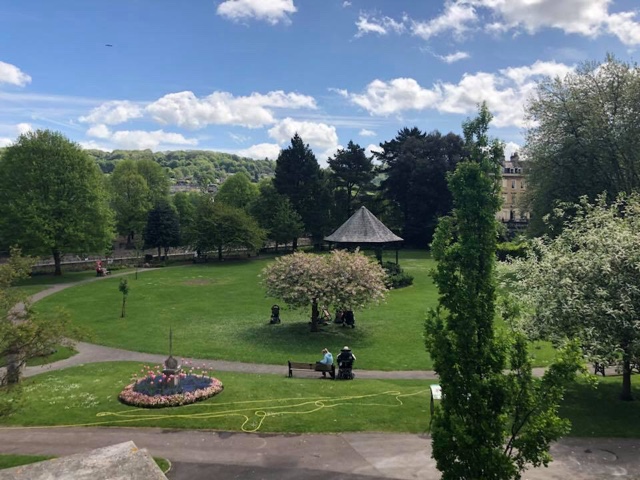 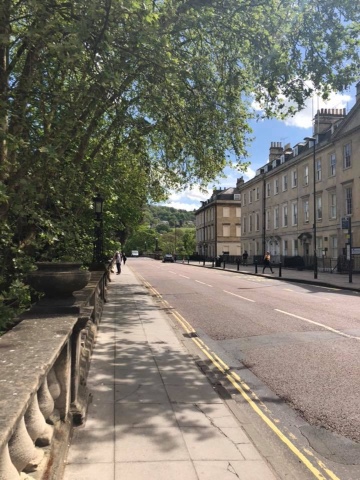 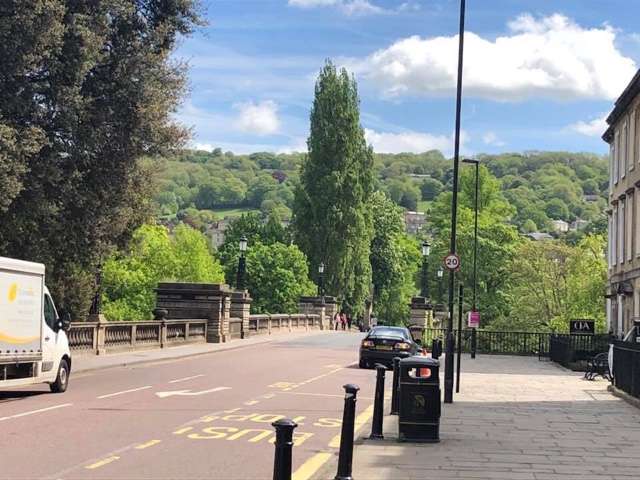 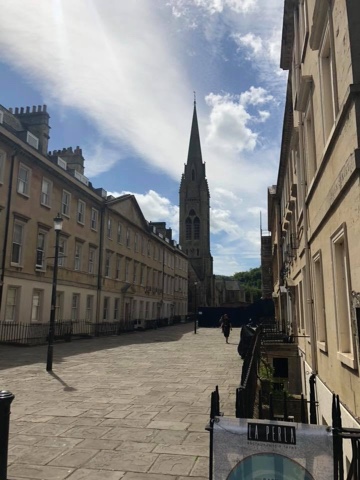 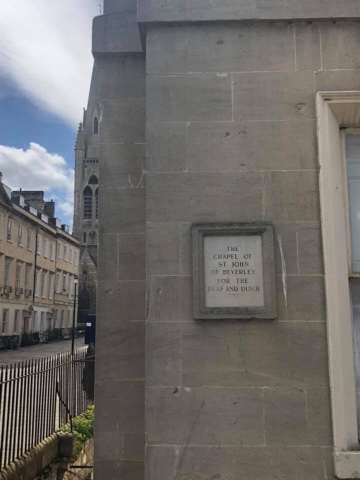 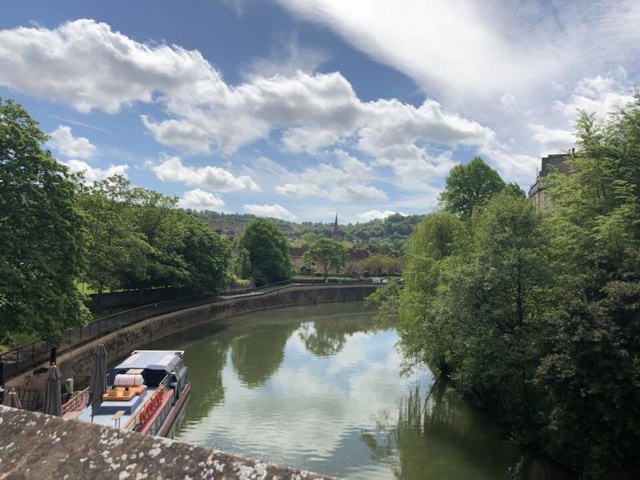 We drove out of town via Bathwick Street and I daydreamed about owning one of those Georgian townhouses. I immediately checked rightmove.co.uk when I saw one of them was for sale and was assured that they were very much out of our budget. Another thing to add to my "if I win the lottery" list. That list sure is growing... 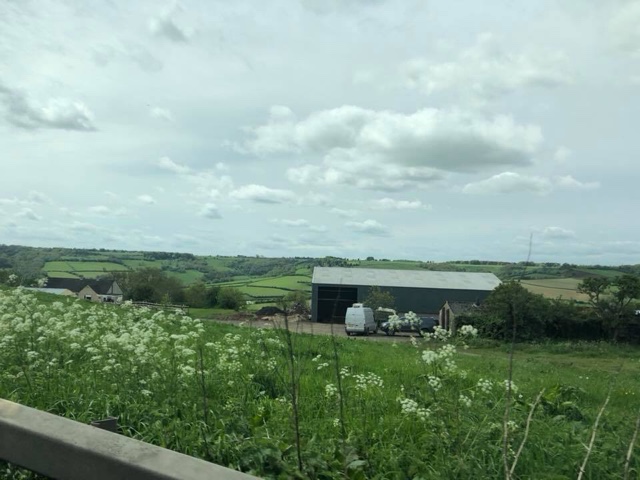 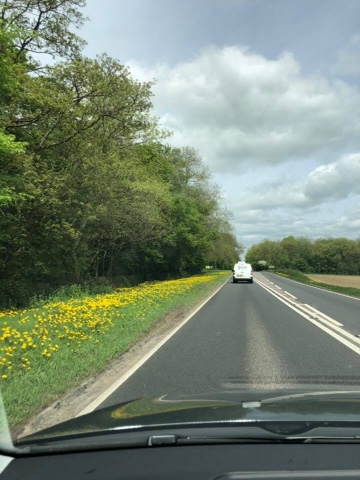 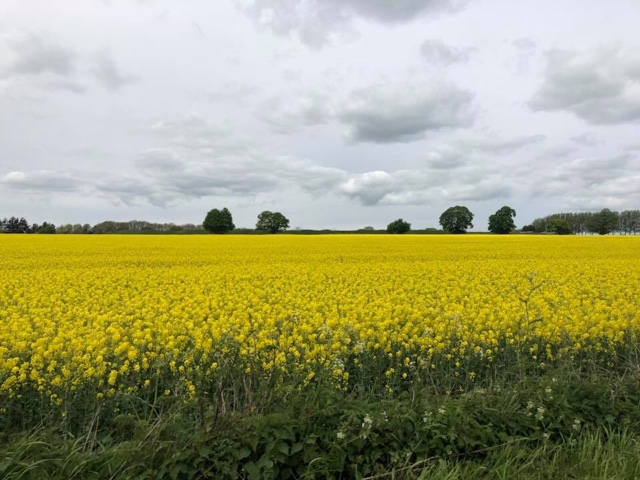 Field of rapeseed were everywhere we went in England 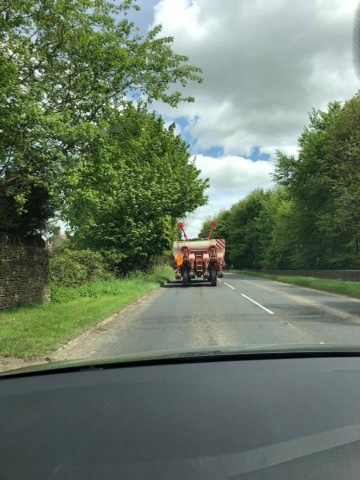