So, a town on your list recently had a poisoning and hasn't been completely de-contaminated? What do you do? You go, but think you just *might* end up on Dateline NBC. I'm not going to lie, I stayed paranoid the whole time we were in Salisbury. Which is a shame cuz it's a lovely cathedral city. On the plus side the city was offering free parking as an incentive to come into town and shop. 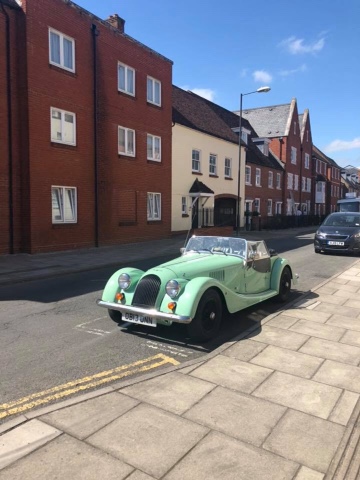 This chap had no trouble finding parking 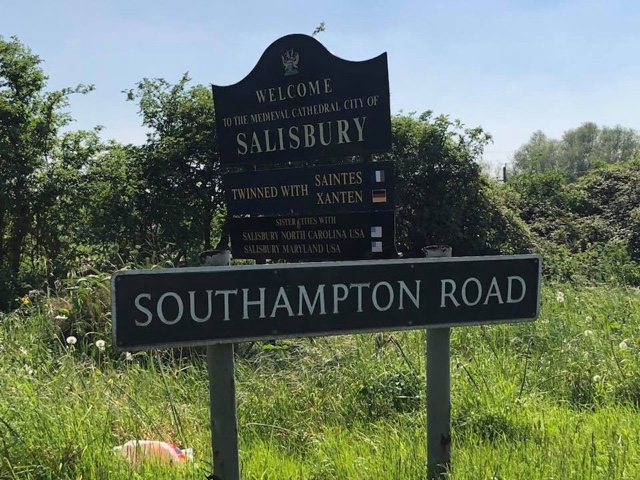 Speaking of parking, as would become common, the hotel we had booked didn't have on site parking so we had to find a 24 hour car park as close to the hotel as possible. And of course the closest one was a mile away, which we had to walk yet again with our luggage bumbling along behind us. We arrived at the hotel door and I was so excited to drop our stuff off and start exploring. We walked into The Cathedral Hotel and were greeted by a very friendly man. He started the check in process and gave the universal smile that says, "there's a problem here but I'm going to pretend like everything is okay.", you know the kind of smile that I mean. So there we were with a valid reservation number and an email confirming our room, but alas we were no where in the computer and we assured that they had been booked up well before we had booked our so it was a mistake all around. He sent us packing with lots of apologizes and suggestions for other hotel options that *might* have rooms available. Again that was said with a cringe-y smile that meant he really thought the opposite of what he was saying. So we took ourselves across the street to the Red Lion Hotel, took one look at the darling courtyard and just knew it was out of our budget. I quickly got my phone out to check their rate and sure enough, it was a no-go. We did an about face without even asking if they had rooms available. (*For future Salisbury travelers- book well in advance and stay at the Red Lion Hotel if you can- it's beautiful!) 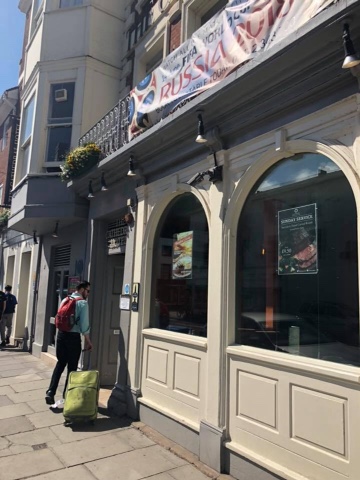 The hotel that didn't work out. How ironic that they're promoting the World Cup in Russia with the Russian spy poisoning situation 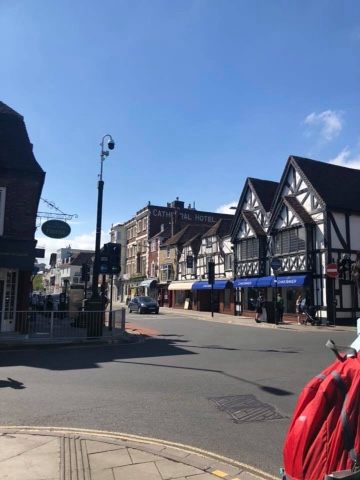 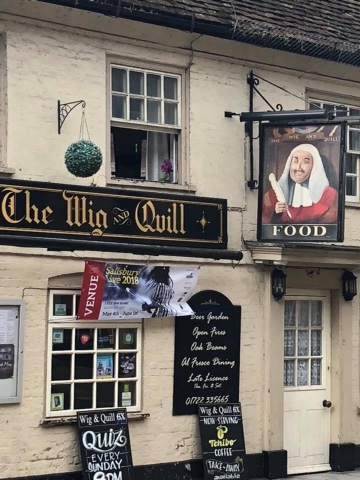 We made our way to the other hotel that the clerk had suggested and we knew the moment we opened the door that it wasn't going to happen. The woman told us that not only did she not have any rooms available but the whole of the vicinity was booked. We hung our heads in defeat and walked back to the car park theorizing the whole way about the fact that there were no rooms. There we were on a weekday, in off season and being told that the city is hurting for tourists yet not a single room available. We decided that the government had taken all of the rooms while they de-contaminate the city, keeping the tourists away. So I can now blame the Russians for having to stay in a hotel on the outskirts of the city with a view of a parking lot instead of a cathedral. Oh and we paid more than the original hotel for that pleasure as well.
The next morning we got up bright and early, excited to explore the Cathedral and it's environs. Salisbury Cathedral Close is the largest in England, spanning 80 acres, it's entered through gates in the stone walls that surround it. We admired the houses and shops that fill the close and I wondered aloud how I could move into one of the houses? Daniel wisely responded that we'd need to win the lottery to do it, so I needed to stop torturing myself thinking about it. He's right, but I did briefly fantasize about Daniel becoming a vicar so we could move into one of the houses that the church owns. He seemed to think that was the wrong reason to become a vicar, go figure!
We followed a path next to the River Avon where we encountered some police officers dealing with a disheveled woman on a bench. One of the officers nicely asked us to give her a wide berth as we walked past but otherwise to go on our way along the path. It was a bit of an odd scene first thing in the morning but we quickly put it out of our minds and found ourselves in front of- you guessed it- a Wetherspoons pub! It was breakfast time after all. The King's Head Inn is in the loveliest location of just about anywhere we had been. Situated right on the River Avon, the building has housed an inn since the 15th century. We go a table by the window right by the river. The view we had over our breakfast was breathtaking, and honestly a bit surreal. School children in their uniforms were filing passed the pub and you just knew they were called Barclay, Reginald, Tarquin, or Rupert and would one day run the banks of England. We made quick work of our breakfast and saw some equally stunning views as we walked to the Cathedral. 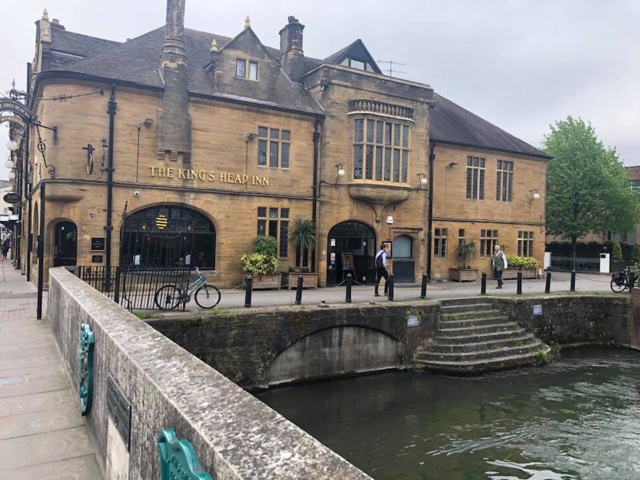 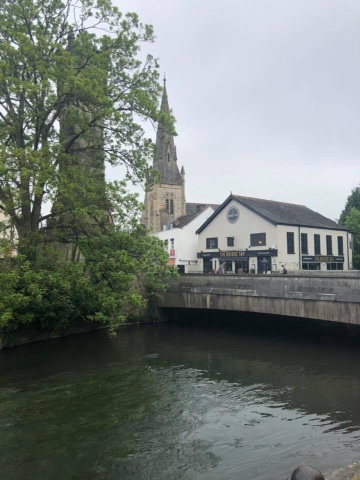 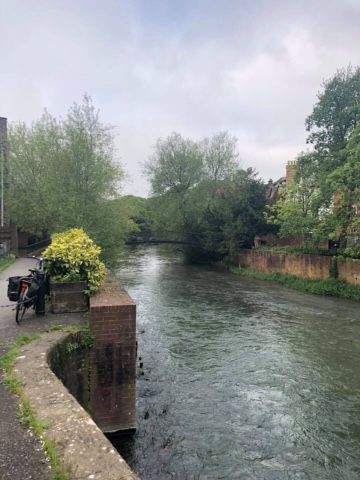 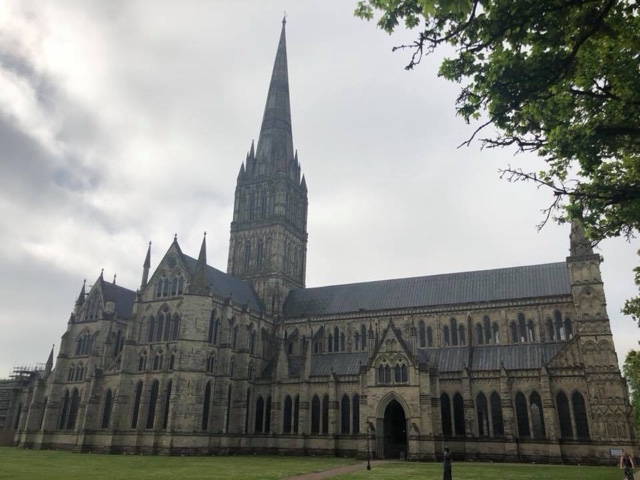 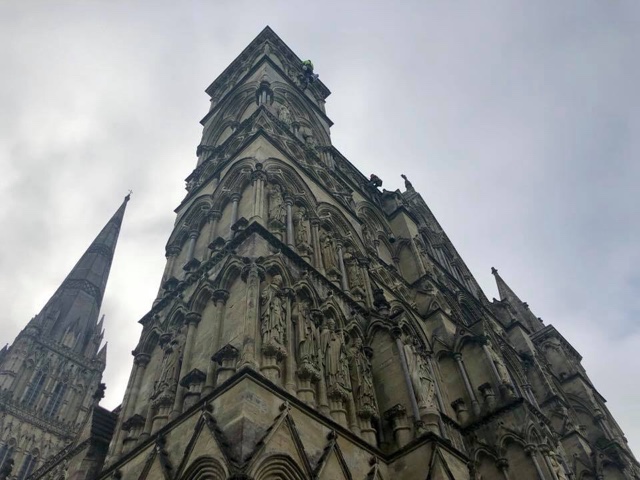 Enlarge this picture- there are two men dangling over the side, cleaning the cathedral!
The cathedral that we now see was built in 1220, but the original actually sat almost 2 miles away on a hill called Old Sarum. Salisbury was originally called New Sarum- which was it's official name until 2009- and made a city by charter in 1227. By the 14th century it was the largest settlement in Wiltshire. Much of the cathedral was completed by 1258, although the complete cathedral that we see now wasn't finished until 1320 when the tower and spire were completed. The spire at Salisbury is the tallest church spire in the country and boy do you know it when you're standing below and looking up. It is such an impressive structure. It is so beautiful, it's almost overwhelming. The west front of the cathedral contains over 130 niches, with 73 of these containing statues. I can't tell you how long we stood there getting kinks in our necks just staring up at the statues. We tried our best to guess each figure based on their style of clothing and objects they might have been holding. The majority of the statues hail from the middle of the 19th century but seven have survived from the 14th century. It's easy to pick those figures out as they are weather beaten and not as clearly defined as the ones from the 1800's. 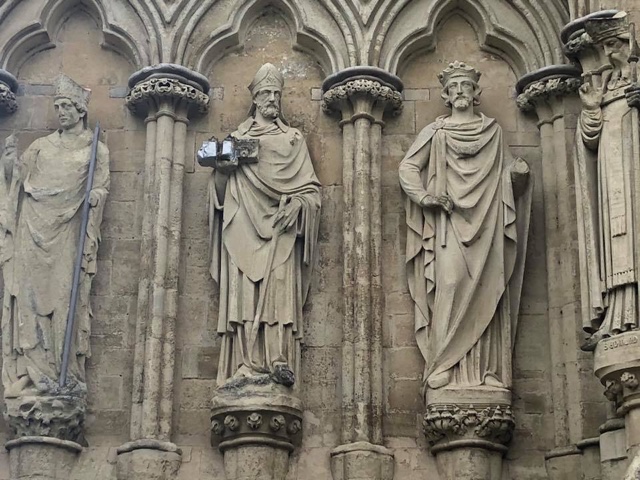 Left to right: Bishop Bridport, Bishop Poore who donated the land that the cathedral sits on, King Henry III, and just peaking out on the right: St. Edmund of Canterbury 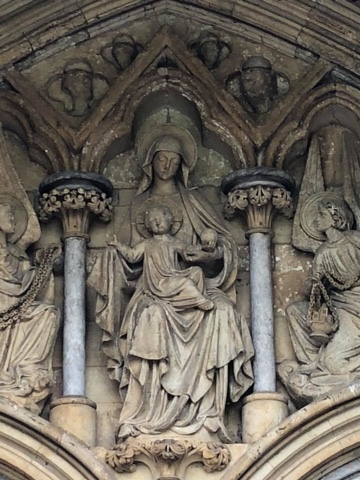 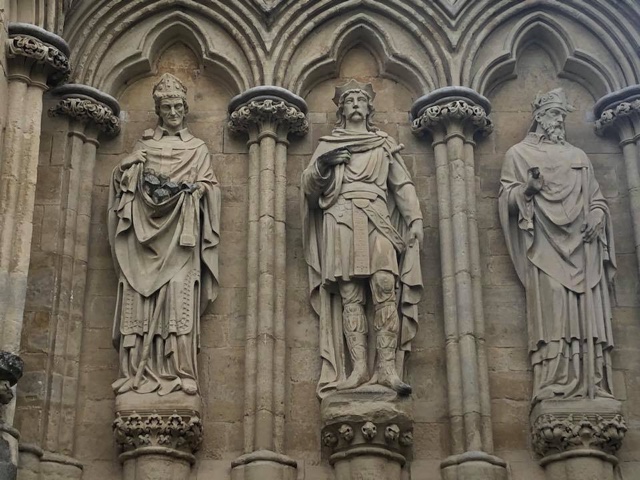 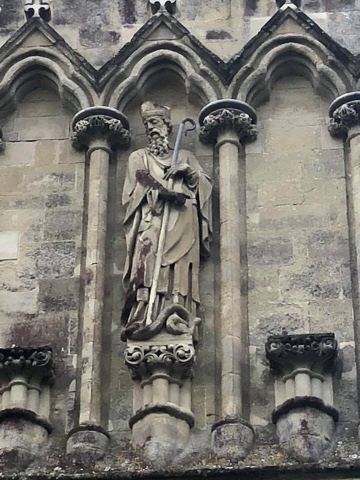 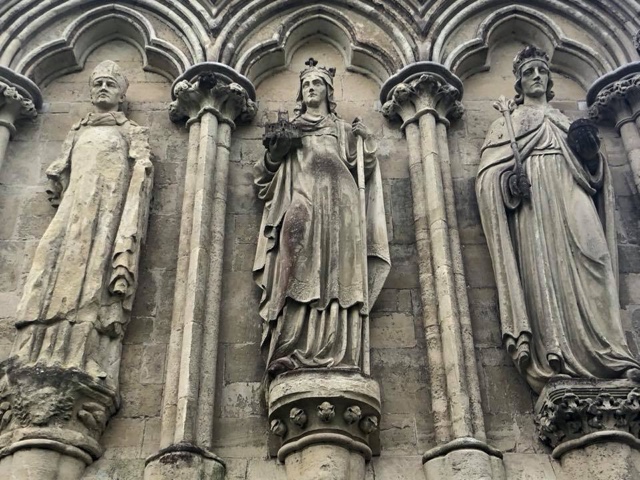 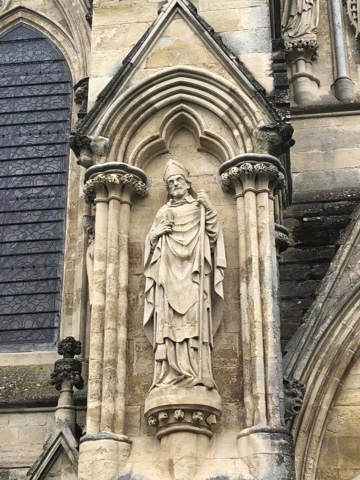 St. Osmund
In true Leah and Daniel form we arrived at the Cathedral well before it opened because we never checked the times. We had to decide if we were going to wait for it to open or get on our way. As usual we had given ourselves a lot of ground to cover in one day and needed to be mindful of the clock. While we made our decision we wandered the grounds and walked the Cloister. The Cloister at Salisbury is lovely with its gothic vaulted arcade that opens to the garth or green space. The garth has been turned into a manicured garden with a pair of cedar trees at the center. The trees were planted in 1837, making them 181 years old this year, which of course makes them practically brand new when you consider the age of the cathedral itself but on their own they're majestic old beauties. 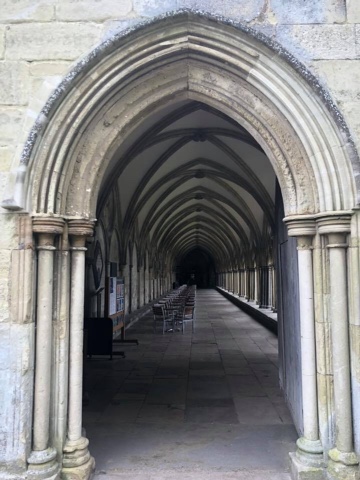 Entrance to the Cloister 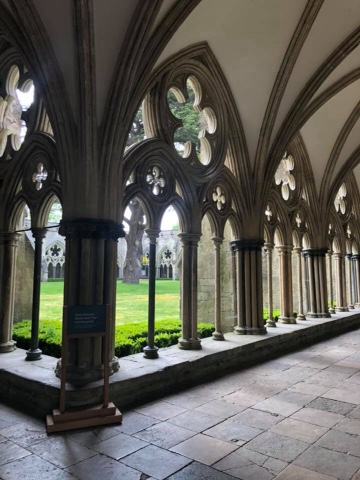 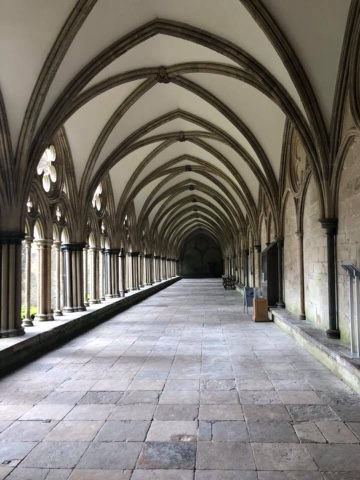 The gothic vaulted Cloister
We resolved not to wait for the cathedral to open, even though it holds a copy of the Magna Carta- we decided to forgo it as we'd seen a copy at Lincoln many years ago. We got on our way, but admired the glorious houses on the North Walk on our way out St. Anne's Gate and vowed that Salisbury Cathedral Close just might be one of the prettiest closes we had seen.
Oh, and we officially survived, with no nerve agent in sight...so visit Salisbury- see the Magna Carta, admire the statues, the glorious Cloisters, and behold the magic of that Cathedral Close without fear.
Labels: cathedral city england Russian Spies Salisbury Salisbury Cathedral UK vacation