As I've mentioned in a previous post, I have an active imagination and I'm definitely a dreamer. I'll get a thought in my mind and run with with- fully developing it, getting completely wrapped up in it. Prior to this trip, when in the research phase of planning I got a bee in my bonnet about Durham. Keep in mind I've never been to Durham, I had never been farther north than Whitby, but I developed a little obsession with it. I watched amateur tourist videos on YouTube, suffered through Rick Steve's annoyingly nasal tone, and poured over real estate. This is a pattern with me so Daniel basically ignores me when I announce that we are moving so that I can tend a small flock of sheep and own 10 dogs. Durham is surprisingly inexpensive for a university town. It has the beautiful River Wear flowing through it's city centre, an 11th century castle adjacent to the most glorious Norman cathedral which is reached by either charming narrow streets or a steep, beautiful river path.

We approached Durham by car and I'm not going to lie- I was disappointed at first. I think I expected to be able to see the cathedral, but all I saw was road works and traffic.  We found a car park and gratefully left our rental car to explore the medieval city. This my friends is when my Durham bubble burst. It was SO cold!! There was rock salt strewn across the ground and slushy ice. I had visions of breaking bones as I carefully traversed the stairs of the Walkergate complex. 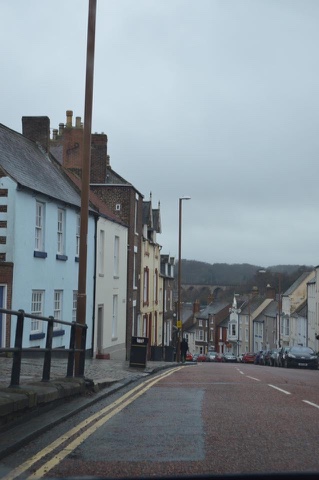 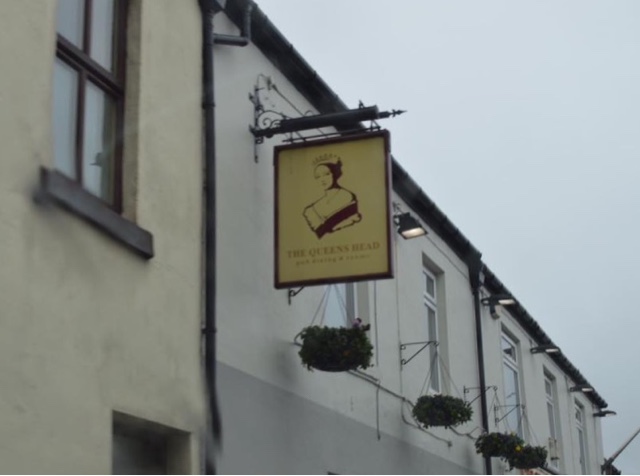 A rather funny sidenote, it was lunch time and we were very much ready to eat something. As we climbed to the top of the stairs we saw a Mexican restaurant. I was curious to try the English version of Mexican food so we checked the menu. Not only was it a bit more than we wanted to pay, it was ridiculously NOT Mexican food. Someone needs to tell them that an "authentic Mexican" menu does not include burgers on brioche buns, peri-peri chicken (a dish originating in Mozambique), or Southern fried chicken! Although to be fair they did have an enchilada dish, a burrito and a few Tex-Mex chili options. We pulled our scarves tighter and set off to find the cathedral, chuckling as we walked away.

We left the Walkergate complex and found ourselves in the lovely Market Place with an impressive statue of the 3rd Marquis of Londonderry, who's comical full name is Charles William Vane Tempest Stewart, astride a horse. The Marquis owned many of the coal mines in County Durham. Although he apparently wasn't a popular employer his widow privately commissioned the statue in 1854, the year of her husband's death. The copper statue was completed and unveiled December 2, 1861 where it has stood prominently for 155 years, with the exception of a 9 month period in 1951 when it was removed for repaired in London. It's quite striking in person.  Also in the Market Place is a statue of the Roman god Neptune. What does the sea God have to do with a city 15 miles from the coastline? In 1720 a plan was developed to turn Durham into an inland sea port by altering the course of the River Wear. This would have required considerable adjustments to the course of the river, which was impractical and costly. The plan was officially abandoned in 1759, but the statue remains as a reminder of what could have been. 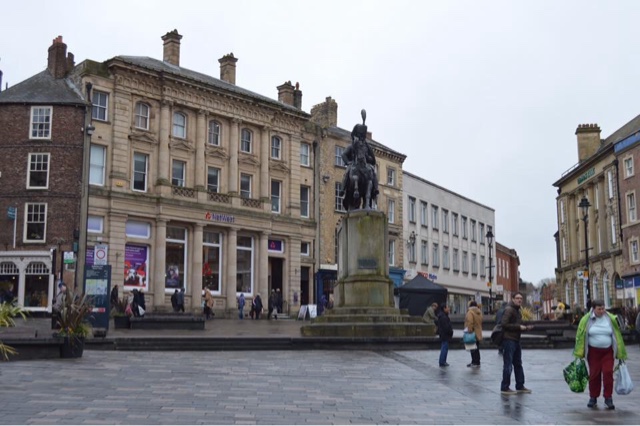 Lord Londonderry astride his horse in the Durham Market Place 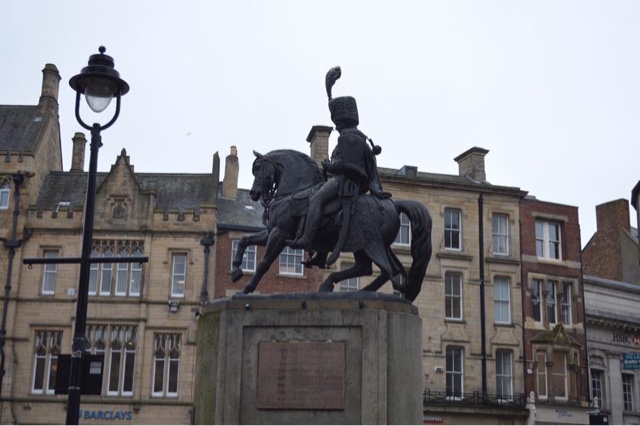 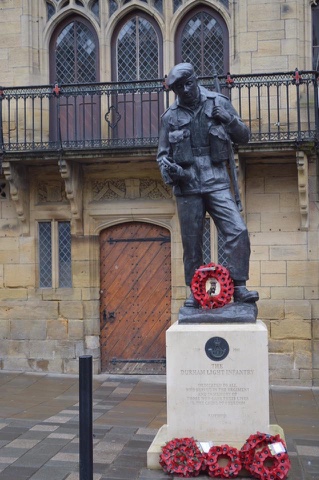 Statue of a Durham Light Infantry bugler. The pose of the figure is slightly bent forward so when you stand in front of it you can look the man in the eye. 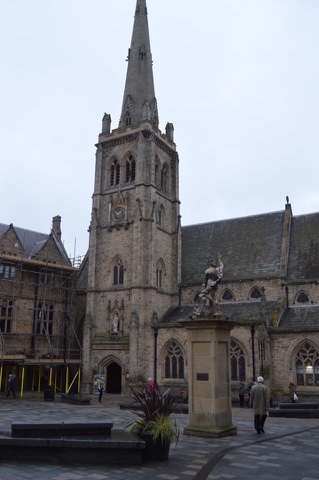 The statue of Neptune with St. Nicholas' Church in the background.

We wound our way down Silver Street passed Krispy Kreme, which was a bit surreal on a narrow medieval street. We walked parallel to the River Wear and ascended the path to the 11th century cathedral. The cathedral is located on a rocky promontory across from Durham Castle. It's such a beautiful and imposing structure. 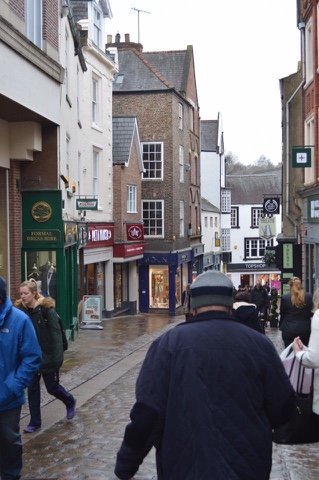 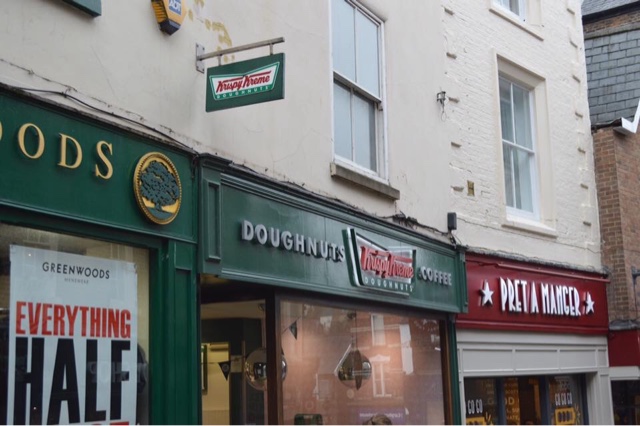 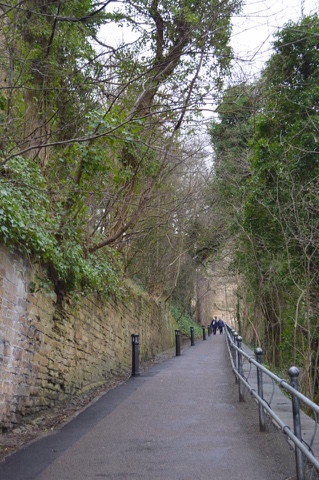 The river path that goes up quite steeply to the cathedral 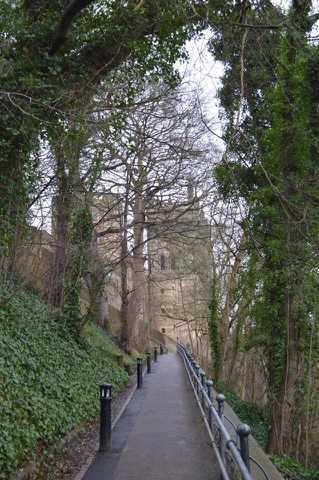 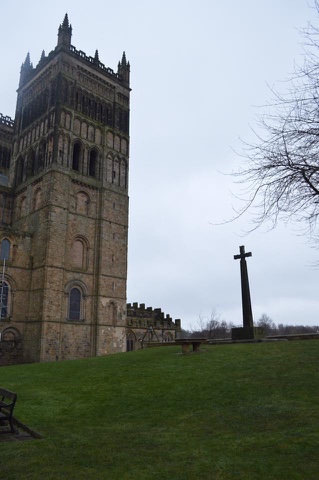 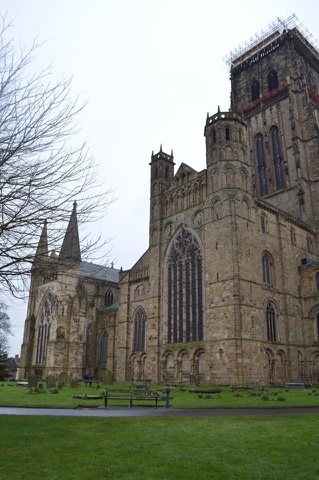 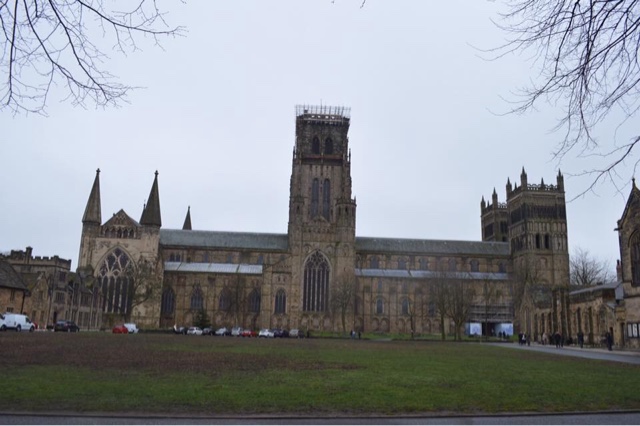 If you're not familiar with English history or more specifically the early Christian church in England you probably don't know who St. Cuthbert is. He features in two separate places on our travels this day- Daniel and I both have a fascination with 7th century Christianity when there was a heavy Celtic tradition and influence- so we chose these sites because of their connection to St. Cuthbert and the 7th century. Around 655 Cuthbert became prior to Lindisfarne and eventually in 684 he was made bishop of Lindisfarne *(more on Lindisfarne later in the next post). He resigned 2 years later to live out the remainder of his life as a hermit, dying in 687. He was buried at his request at the monastery at Lindisfarne. In 995 his body was moved to Durham where his followers, the "community of Cuthbert" settled after fleeing Lindisfarne during a Danish invasion. Durham Cathedral was built to house the shrine to the Saint buried there. 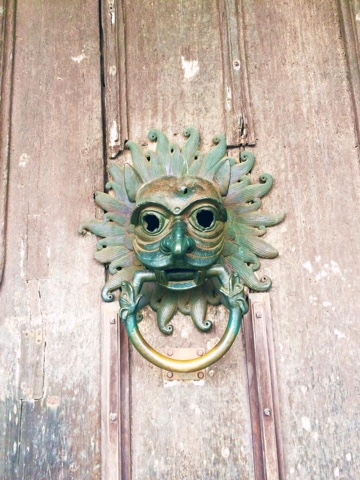 The sanctuary knocker on the door of Durham Cathedral. This is a replica of the original.

While on the subject of English history and the early Christian church, the Venerable Bede- contemporary of St. Cuthbert- is also buried at Durham Cathedral. Considered the most learned man of his time, and called, "the Father of English History", he wrote biblical and historical books. His best known work is the Historian ecclesiastica gentis Anglorum or "An Ecclesiastical History of the English People", a history of England beginning with Caesar's invasion in 55 B.C. 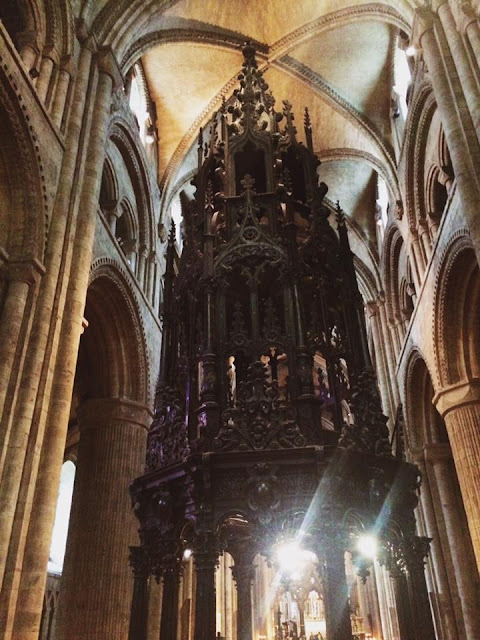 The 17th century font located in the nave of the cathedral. 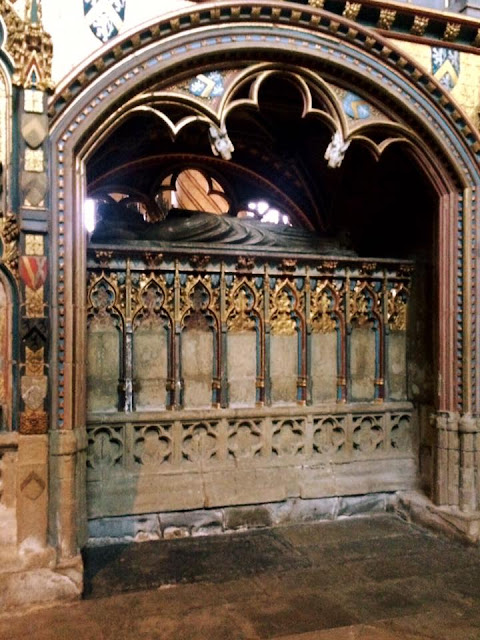 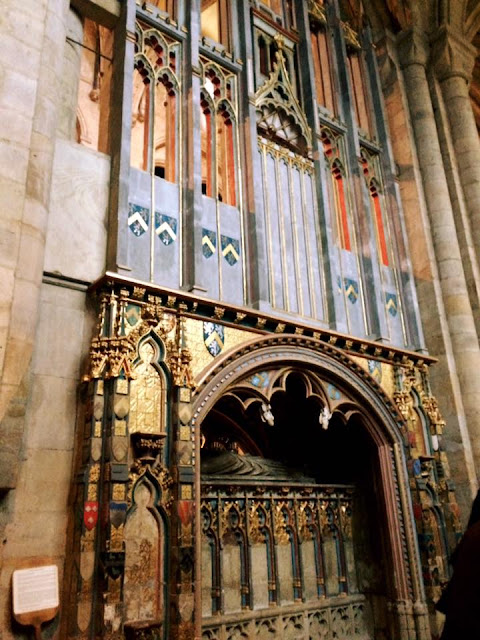 I have no photos of the tomb of Venerable Bede or the Shrine and tomb of St. Cuthbert. Durham Cathedral does not allow photos. I took a few (as I'm sure you're noticed) before I was chased down by a portly man in a purple robe who informed me that there was no photography allowed, even without flash. Cue disappointed trumpet sound, as I noticeably deflated. I had been so excited to get photos of both St. Cuthbert's shrine and Bede's tomb- I had an internal tantrum but I stuck to the rules. You'll have to trust me that it was beautiful in person. This website, Durham World Heritage Site  has good photos and descriptions of the shrine and tomb. The tester, a kind of suspended canopy above the tomb, was brilliant and vibrant. The tester is actually modern, placed above the simple 16th century black marble slab inscribed CVTHBERTVS in 1949, Sir Ninian Comper depicted Christ in glory surrounded by the four evangelists. We lit candles at the shrine, had a moment of quiet contemplation and decided to move on. There was a large group of school children with drawing pads in hand, sketching and learning about the stained glass windows in the Chapel of the Nine Altars right behind us. It was lovely to see learning in progress but also a huge distraction, we were having a hard time blocking out their little whispers and our own growling stomachs. 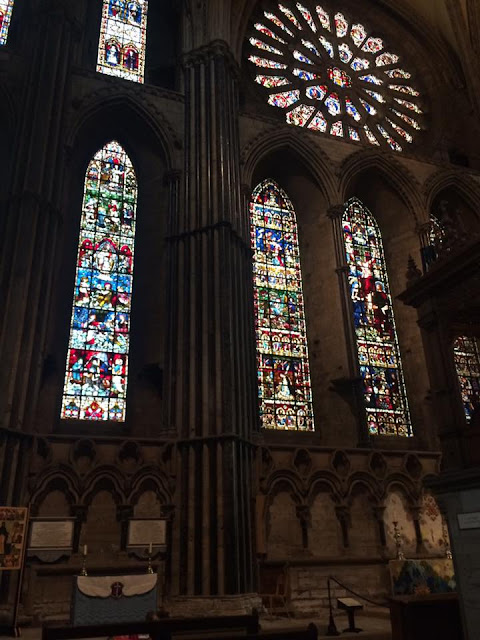 We made our way out of the cathedral through the Cloister to the restaurant on site. It was packed to the gills but we were able to snag a table just as another couple got up to leave. We had tea for two and the best cheese scone I've ever had. I spent entirely too much on little trinkets and tea towels in the gift shop. I wasn't quite ready to leave Durham yet but we had to make it to Berwick-Upon-Tweed 80 miles north with a stops at Alnwick Caslte, Bamburgh, and the Holy Island of Lindisfarne all before nightfall.

I loved the city of Durham with it's pedestrian friendly streets, shops, and river walks but I crossed it off my list of potential locations for my imaginary idyllic English life because it was just too darn cold and this Californian just couldn't hack it even for a few hours. 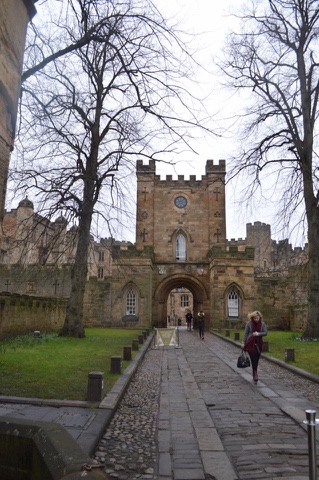 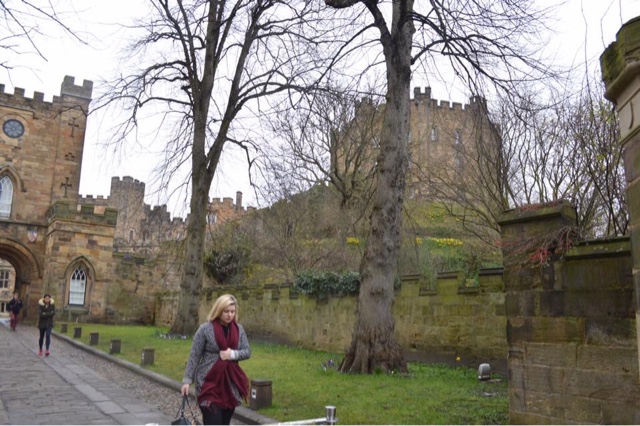 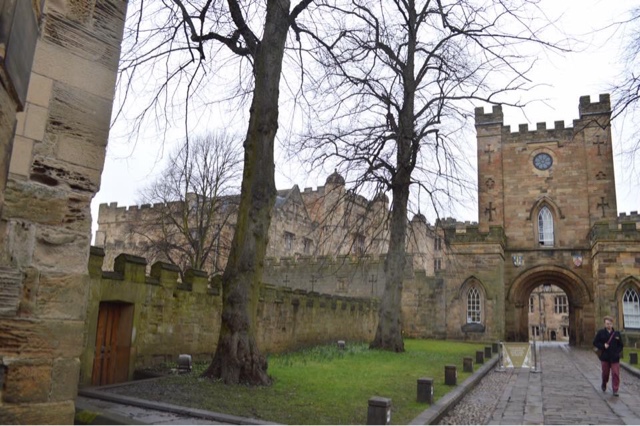 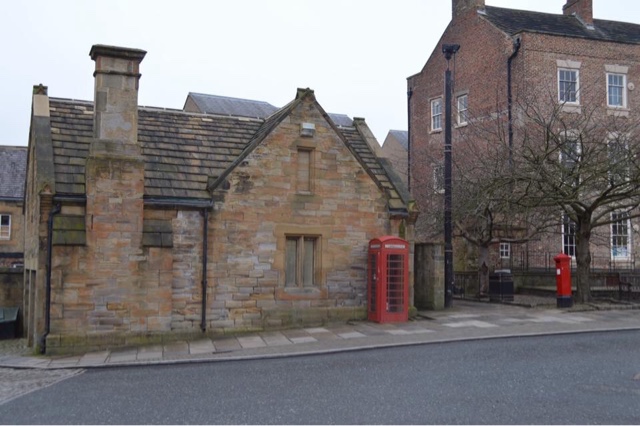 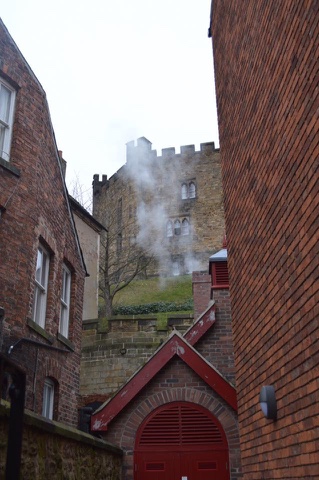 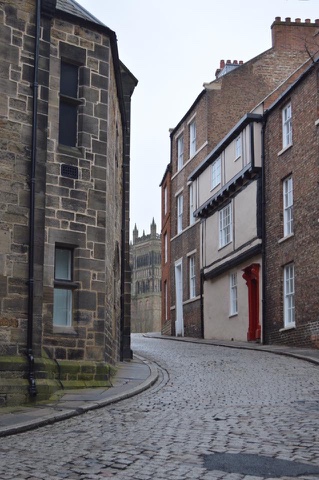 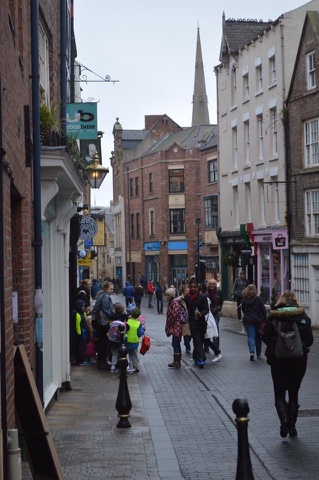 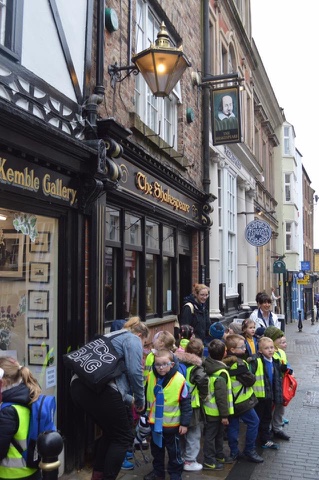 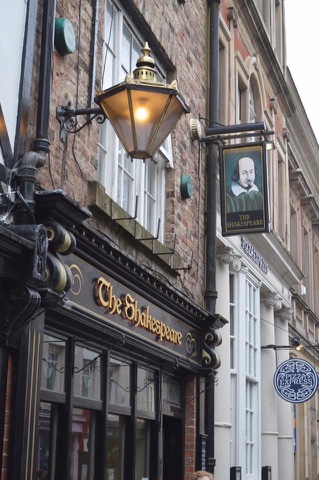 Onward ho, to a little piece of the world of Harry Potter, a tidal island, and the last English coastal town before the Scottish Border.