We got up early to head out to Whitby and a drive through the moors before making our way to Durham. Whitby was one of my favorite places on my previous visit so I excited to see it again. I also had make a pact with myself that if I returned to Whitby I would purchase a piece of black jet jewelry. I couldn't afford it on my first visit and I always regretted not bringing home a piece of that iconic gemstone (which is actually petrified wood from the monkey puzzle tree!). Jet is found all over the world but the finest jet comes from England and in particular the north-east coast of Yorkshire. Whitby jet is unique; it's blackness is intense and can be polished to such a high extent that it can be used as a mirror. It became a popular tourist souvenir in the Victorian era, and was worn by Queen Victoria during her mourning period, only allowing Whitby jet to be worn at court during this period. I wanted a piece of antique jet as the modern settings aren't to my taste- usually sterling silver and very reminiscent of the chunky jewelry I wore in the 90's. So I was on the hunt that cold, wet day in Whitby. I wanted my jet and I didn't want to break the bank. 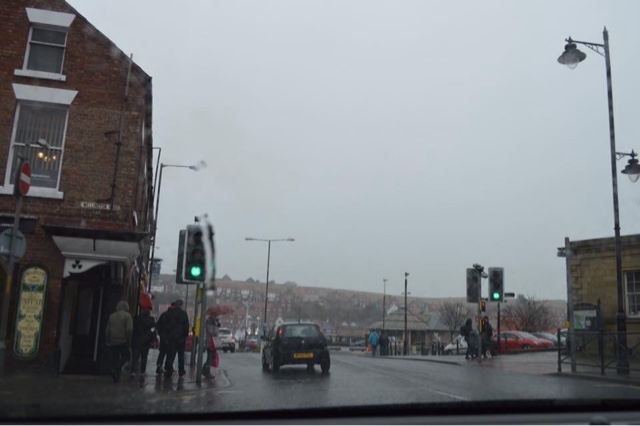 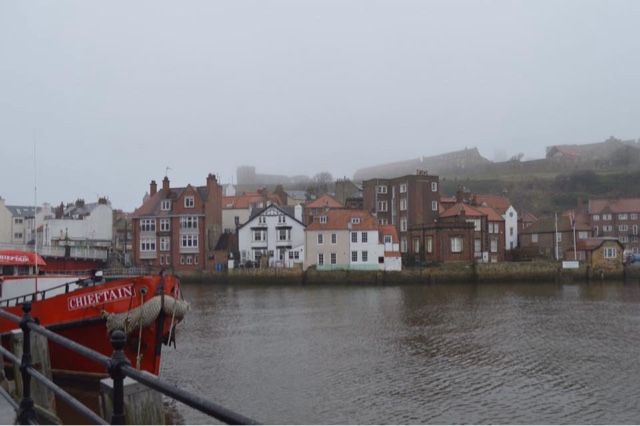 Mist and fog covering the Abbey in the distance and the Church of St. Mary 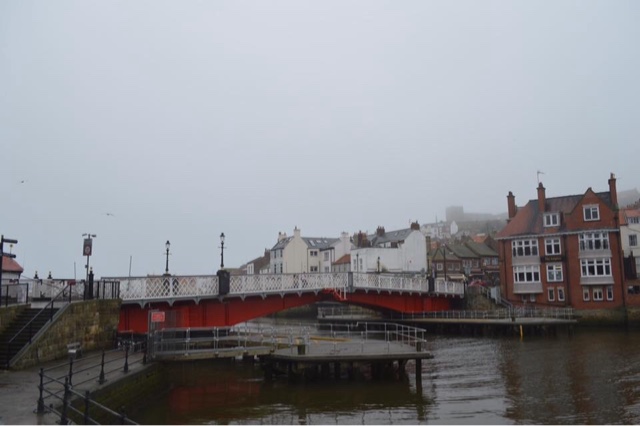 Whitby is a goth teenagers dream. Daniel took me there the first time all of those years ago because he knew that I would be intrigued by the black jet jewelry but also the fact that Bram Stoker sat on a bench next to a ruined Abbey and wrote Dracula. My first trip there we spent all of our time at the crumbling Abbey and the church next door, Church of St. Mary with it's eroding cemetery. I'm glad we got to fully explore it my first time because it was not open yet this time. (A public service announcement to anyone planning on traveling to England- almost all of the sites and places we came to see didn't open until after Easter. We missed out on so much.) 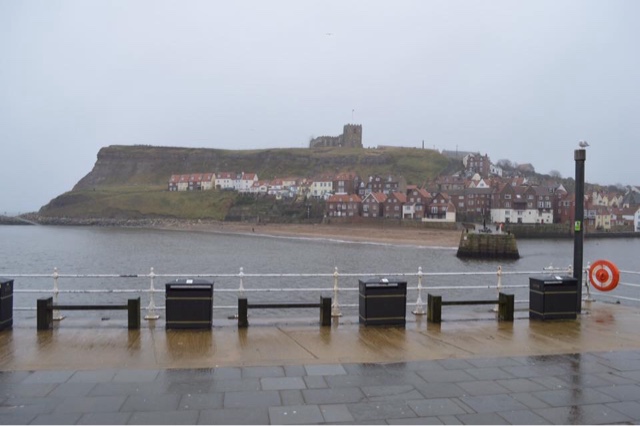 This history buff in me had also wanted to go to Whitby all of those years ago because in 664 A.D. the Synod of Whitby was held at Whitby Abbey. This meeting of the early English church was the turning point that changed the history of the church in England until the Reformation of the Tudor period. At the synod King Oswiu (Oswy) of Northumbria presided over a council that decided the date of Easter but more importantly it was at this meeting of ecclesiatics that Britain decided to officially adopt the Roman customs of the church and drop the Celtic customs that had been practiced along side it. This was the beginning of the Romanisation of the church in England. I have a fascination with 7th century Christianity of the British Isles so  Whitby was a must. In fact the next few days of our trip were centered around sites that were important to that time period and Whitby kicked that off for us. 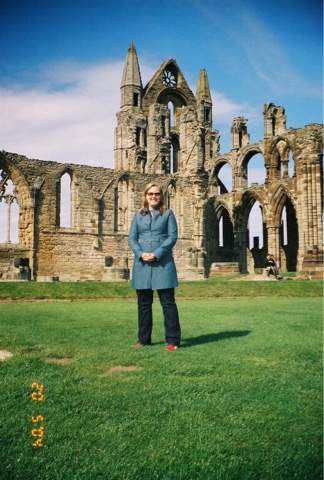 Me at Whitby Abbey 12 years ago on a lovely May afternoon.

Whitby is also home to a replica of the EMS Endeavour, called the Bark Endeavour. The original ship was built in Whitby and launched from it's port in June 1764. The ship was captained by James Cook on his first voyage of discovery to Australia and New Zealand from 1769-1771. Sold into private hands in 1775 the ship was hired as a British troop transport during the Revoutionary War and was scuttled in Narragansett Bay, Rhode Island in 1778 (the wreckage has possibly been found as of this year!). The Bark Endeavour was built to 40% scale of the original and sails the harbour at Whitby and along the coast to Sandsend. So here's the big question of the day: where was the ship? As we pulled into Whitby I expected to see it's tall sails and masts but it was nowhere to be seen. There is no way you can miss a large ship like that. The sign appeared to be gone as well, so it didn't seem to be out for a pleasure cruise. I've been researching for hours and can't find anything to indicate where the Bark Endeavour has gone to. My husband swears that it wrecked in a storm a few years ago and that he knew it wouldn't be in Whitby when we arrived, but I can find absolutely no evidence of this. The website however, is still fully functioning, although the Facebook page says it's permanently closed.  So, either it did wreck or it was being housed elsewhere, but it was strange to be expecting to see it and the dock was empty. So much for recreating my photo from 12 years ago. 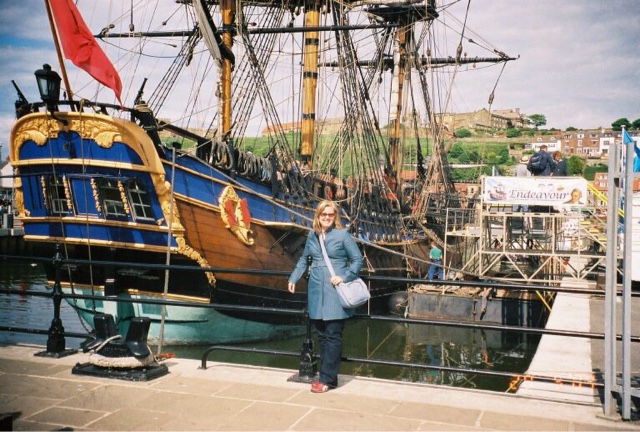 Me in front of the Bark Endeavour in Whitby Harbour 12 years ago. 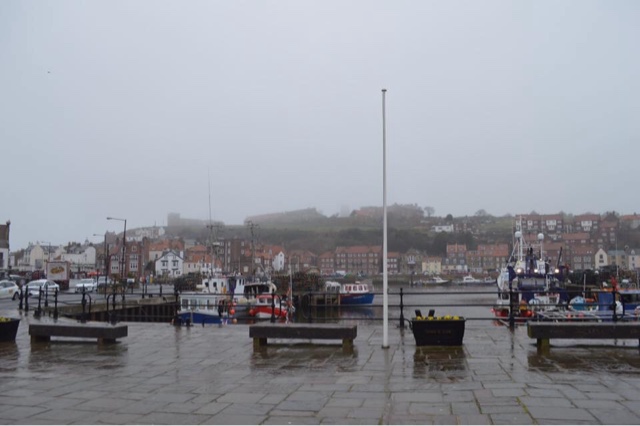 Endeavour, where are you? This is where it should have been docked. 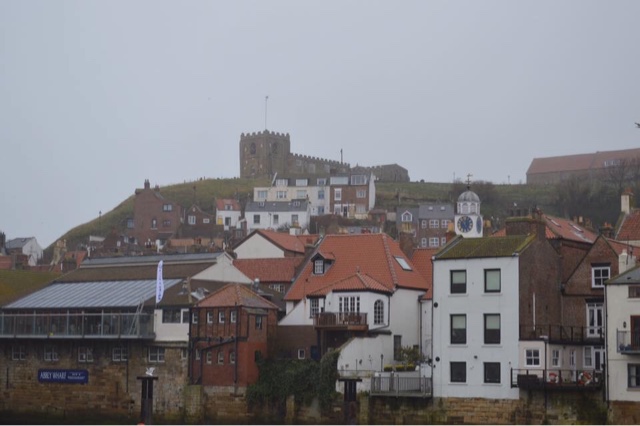 We crossed the swing bridge in search of open bookstores and jet jewelry. Everywhere you turned stores had an abundance of jet jewelry. I can't say they were all authentic, but they were all pricey. I decided I wasn't going to buy a piece of jewelry just for the sake of buying a piece of Whitby jet so I was being pretty picky. I tried on ring after ring but none of them spoke to me. I fondled pendants and ogled earrings. Absolutely nothing was worth the price if I didn't absolutely love it. I did find a small Victorian antique pendant for 80 pounds ($105) that I really liked but I had to be honest with myself. I would never wear it and $105 was a lot to spend on something that would sit in a jewelry box. Once again I walked away from Whitby without my piece of jet, but sometimes practicality just has to win the day. Maybe someday I'll have the budget that allows me to purchase the piece of jewelry that I really wanted (found here from the original shop WHamond, anyone got a spare $3,500?). I made Daniel promise me that next time we go to Whitby (and there will be a next time) we'll walk the beach in search of raw jet, which erodes from the cliffs and washes ashore. 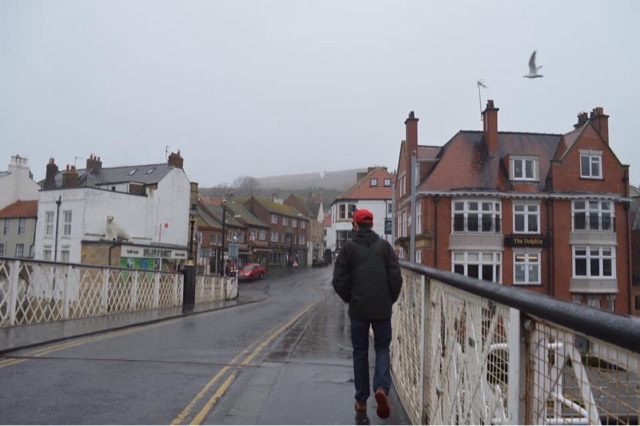 My husband walking across the swing bridge 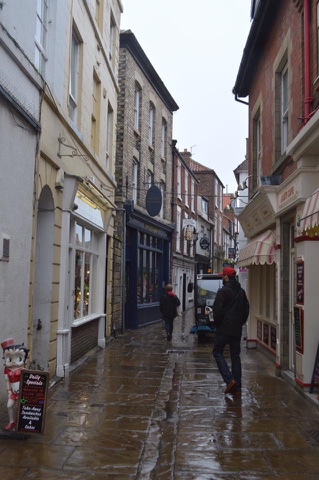 The beautiful, narrow streets of Whitby 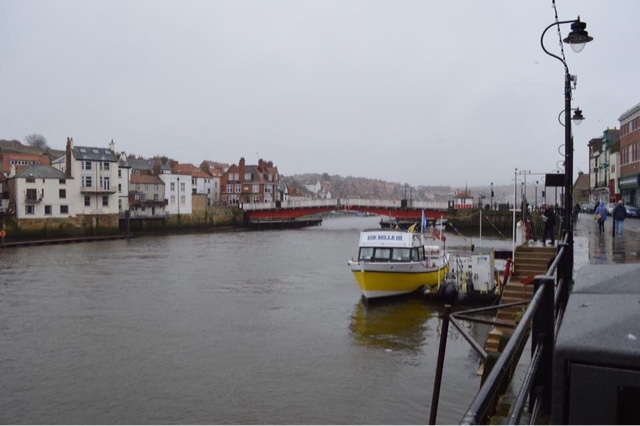 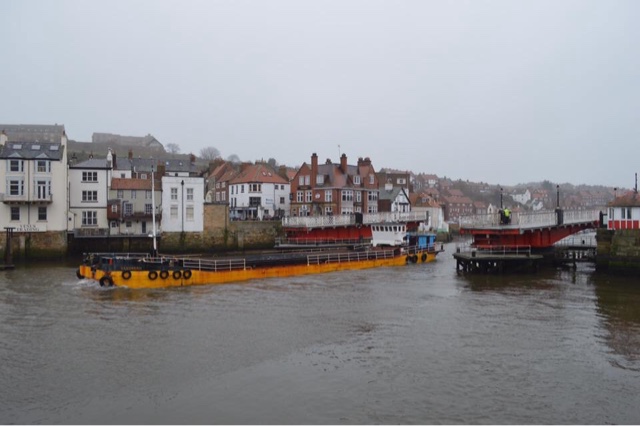 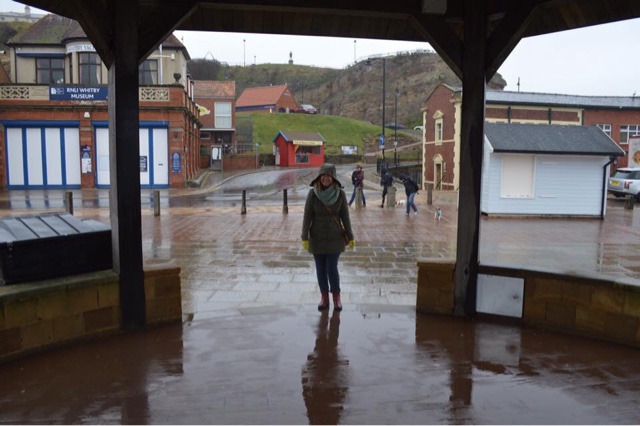 Cold, wet and happy in Whitby.

Off through the misty North York Moors we went. I didn't get any photos of this because we were just enjoying the view and the ride. Our next stop was Durham and I couldn't contain my excitement! I was ready to explore Northumbria!