Crossing the border into Northern Ireland (N.I.) was pretty anti-climactic. I've heard of years past when it wasn't an open border and you were routinely searched by military at checkpoints that could have traffic backed up for hours. I honestly thought that there would at least be a whisper of this bygone era of checkpoints and border patrol. If you blink, you miss it. It's as simple as that. In fact our road atlas didn't even have clear border markings. There's more control at the border between California and Oregon!

Our border crossing happened between Lifford in the Republic and Strabane in N.I. on the Lifford Bridge. We passed a sign for the "North West Passage", which I mistakenly thought denoted the border, but in fact is a cycling route. So really there is no indication other than the signs changing from km/h to mp/h. Oh, and gas station prices were no longer advertised in euros but in pounds.

The one thing we both noticed about N.I. that stood out was the abundance of wind farms. We had seen some in the Republic but they were much more plentiful in the north. Let me tell you, up close those things are huge! I didn't mind them or feel like they marred the landscape but apparently they're quite controversial in Ireland- both north and south- and are seen as an eyesore.

Things felt distinctly different in N.I., it does feel like a different country, separate from the Republic. I might have some pretty controversial and unwelcome views on this topic and I've been debating with myself about how much I'll say. I'm sure I'm bound to offend someone, but I'll put it this way: the Republic of Ireland and Northern Ireland definitely feel different culturally- there is a distinct sense that their paths took very different turns many decades ago- I don't know how they would ever integrate if Northern Ireland were to gain independence from the UK and reunite with the Republic. How would the two relate to one another? I would have to say that I really don't think that the worries and concerns of a farmer in Wicklow would be the same as that of city dweller of Derry/Londonderry. Maybe I'm wrong, but as an outsider this was my observation and I know my husband agrees, as we had many discussions about it on our long car rides. But let me be clear: I'm not saying one way or another whether I think the Republic and N.I. should reunite- I truly don't know enough about the subject- what I am saying is that from an outside point of view the countries feel different, separate and unique.


This feeling of things being distinctly different really began to shape as we finally drove into Derry/Londonderry. Derry (which is what I'll call it as it is the original name and the one usually used) has a very turbulent history and is the birthplace of The Troubles. So much has happened there, including first and foremost the changing of it's name. Derry was legally changed to Londonderry in 1613 during the Plantation of Ulster (explanation found HERE), but it has always used both names interchangeably. This a city divided and the name is the most obvious sign. If you are Catholic or a nationalist you will most likely prefer to call it Derry, while the unionists or Protestants will prefer Londonderry. In the UK it is Londonderry and in the Republic of Ireland it is Derry. A house divided or what?!

Right off the bat we got lost. Derry seems to have quite a few one way streets and our AA route planner really didn't give us great directions. Eventually we pulled over and Daniel found a city employee to help. I looked up from our map and suddenly a second man was enlisted. Between those two men we were put to rights and found our B&B. Thank you men in the reflective safety jackets!


Our B & B (Rose Park House), located just a few blocks from both the Bogside and the city centre, was a little oasis in the middle of a bustling, working city. I must admit, it wasn't love at first sight with the city of Derry. In fact love doesn't even enter the equation. They are clearly not in competition for Northern Ireland's tidiest town, but what it does have in spades is history- old and recent alike. The history is the only reason to come to Derry.

We didn't get many photos of Derry. It's the kind of city that we didn't feel particularly comfortable openly carrying our large camera in. It's not that Derry felt unsafe, but it definitely feels like a city, with shards of glass from broken beer bottles, graffiti and animal waste on the sidewalks- the kind of place that you don't want to look like an obvious tourist in. Looking back I suppose it's the exact place that we should have just thrown caution to the wind in and been snap happy. It felt urban and at times gritty which would have made for good photos. 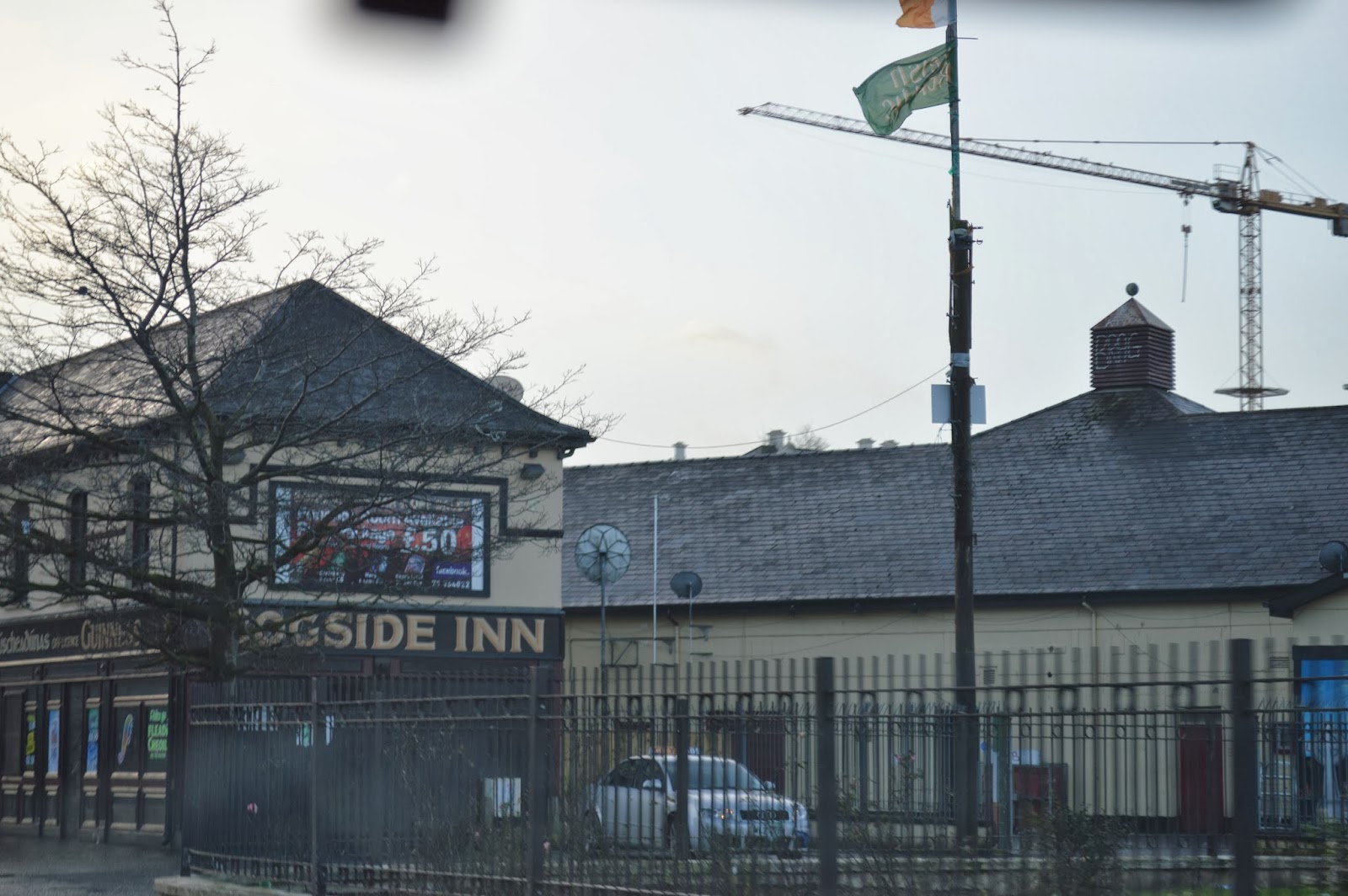 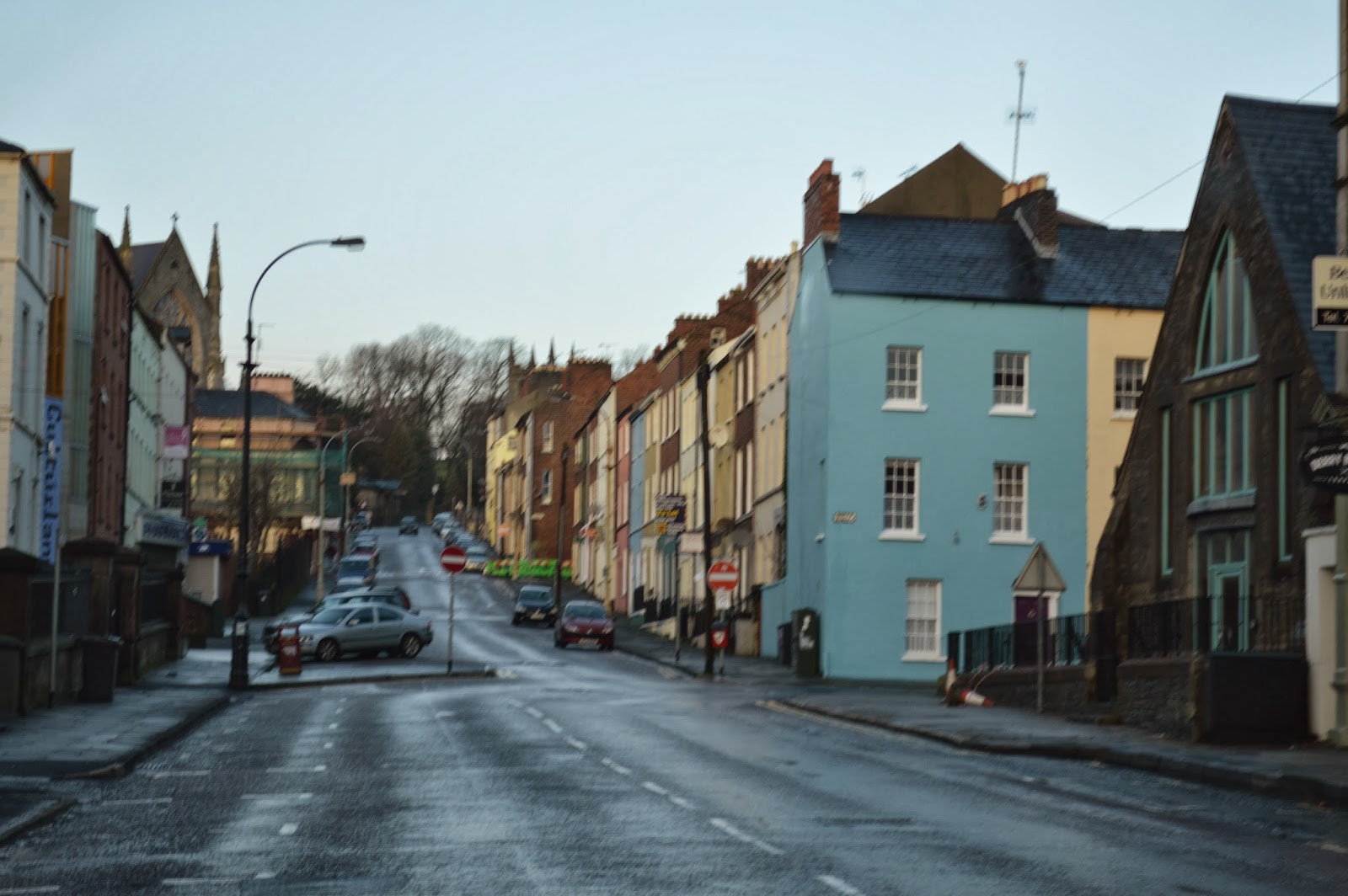 The more time that goes by I look back on Derry and see how very interesting it was. It felt a little bit like it was in a bubble, that time had stopped a bit for it's citizens. Women's fashions were an odd combination of the 1990's and the 1960's, with all ages of women and girls favoring teased bouffants and heavy eye makeup.  Lot's of thick eyeliner and dark, drawn in eyebrows. It's an amazing place for people watching. We took the opportunity to do just that from the window seat of a restaurant in the Quayside Shopping Centre. It felt like the whole city was going by- kids in school uniforms getting sweets, women in housecoats hailing taxis with a cart full of groceries, young families with plastic covered prams keeping out the wet and chill. I felt completely out of place with very little makeup, hair flat and left to wave on it's own.

The owner of our B&B (who looked and sounded exactly like the actor James Nesbitt to me) couldn't have been kinder and more informative about the history of his birth city. That's the thing about B&B's- I think it takes a very friendly, chatty person to successfully own and operate one. Personally I feel like they are the best places to stay in a foreign country, even if it's only for one night to get the feel for a place. Thomas, the owner, talked a lot about the 17th century history of Derry, but personally I'm more interested in the more recent history of the city. Usually I'm all about history that's older than the 16th and 17th century, but when it comes to Northern Ireland I want to hear about The Troubles of the 20th century.

It really started in the 17th Century but the peak was in the 1960's and 70's. What started as a religious and political division turned into a civil rights movement. Something I didn't understand before I came to Northern Ireland was the real situation at the heart of The Troubles and the clashes in Derry. I'm becoming endlessly fascinated with this subject. These links explain the civil rights issue as well as The Battle of Bogside, Bloody Sunday and the People's Gallery: Museum of Free Derry, Bloody Sunday Trust, Bogside Artists, People's Gallery. A great film about Bloody Sunday can be found at YouTube, HERE. (yes, the Bloody Sunday of "Sunday Bloody Sunday" U2 fame).

The People's Gallery, is a series of 12 murals depicting scenes from both The Battle of Bogside and Bloody Sunday. Three artists have painted the scenes from photos from the actual events. These murals are both beautiful and bleak because they represent some very dark days. 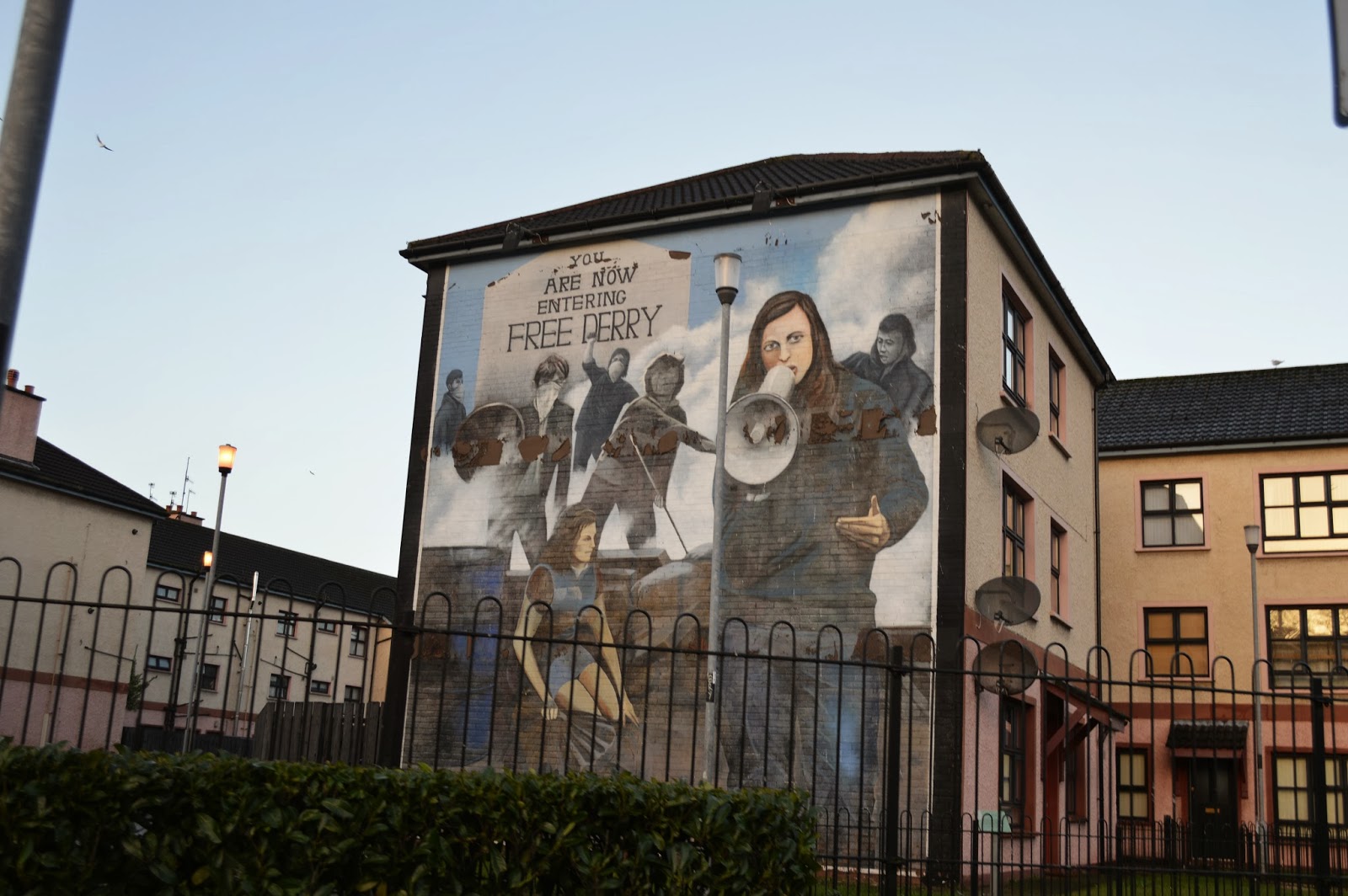 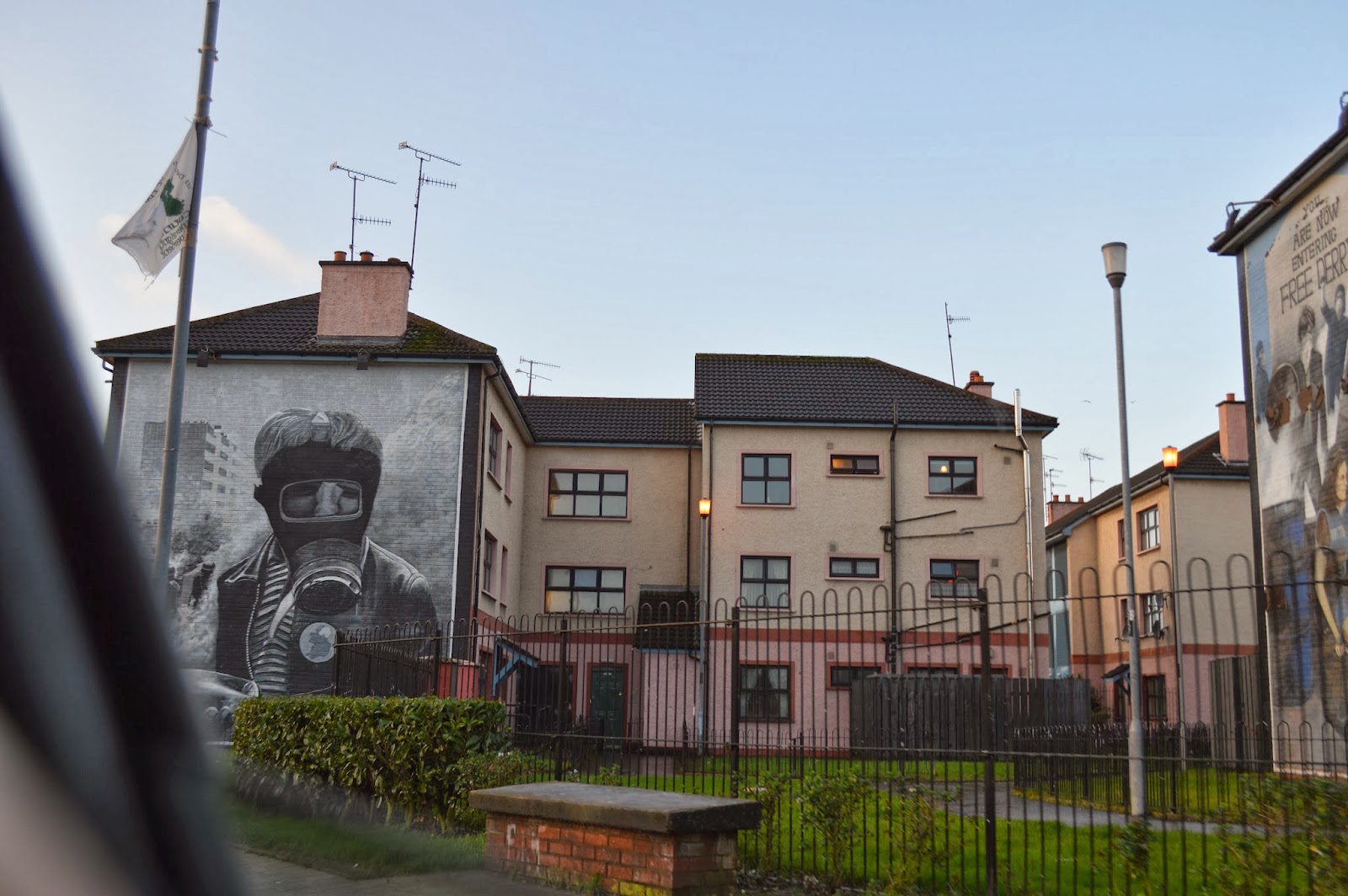 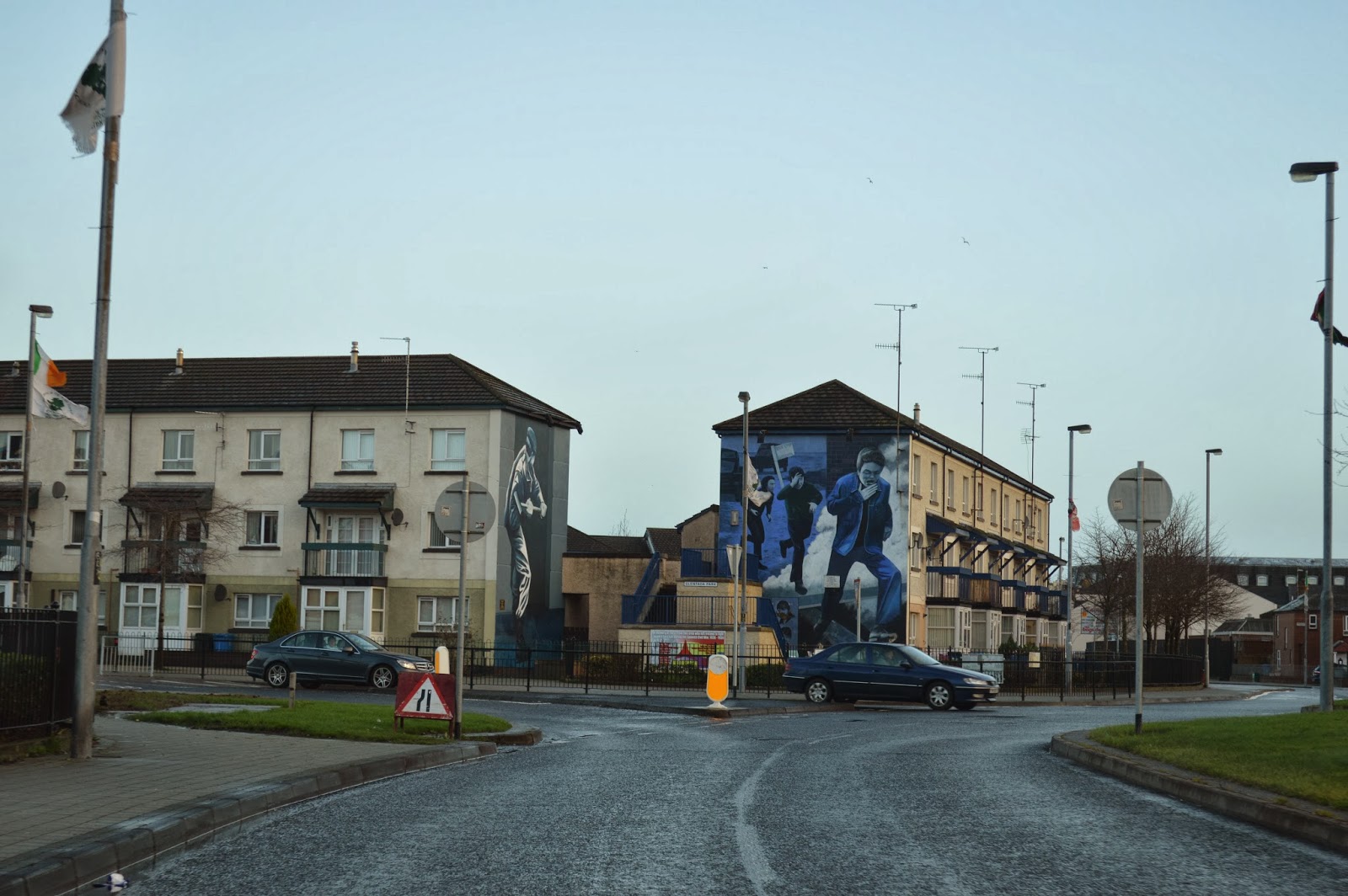 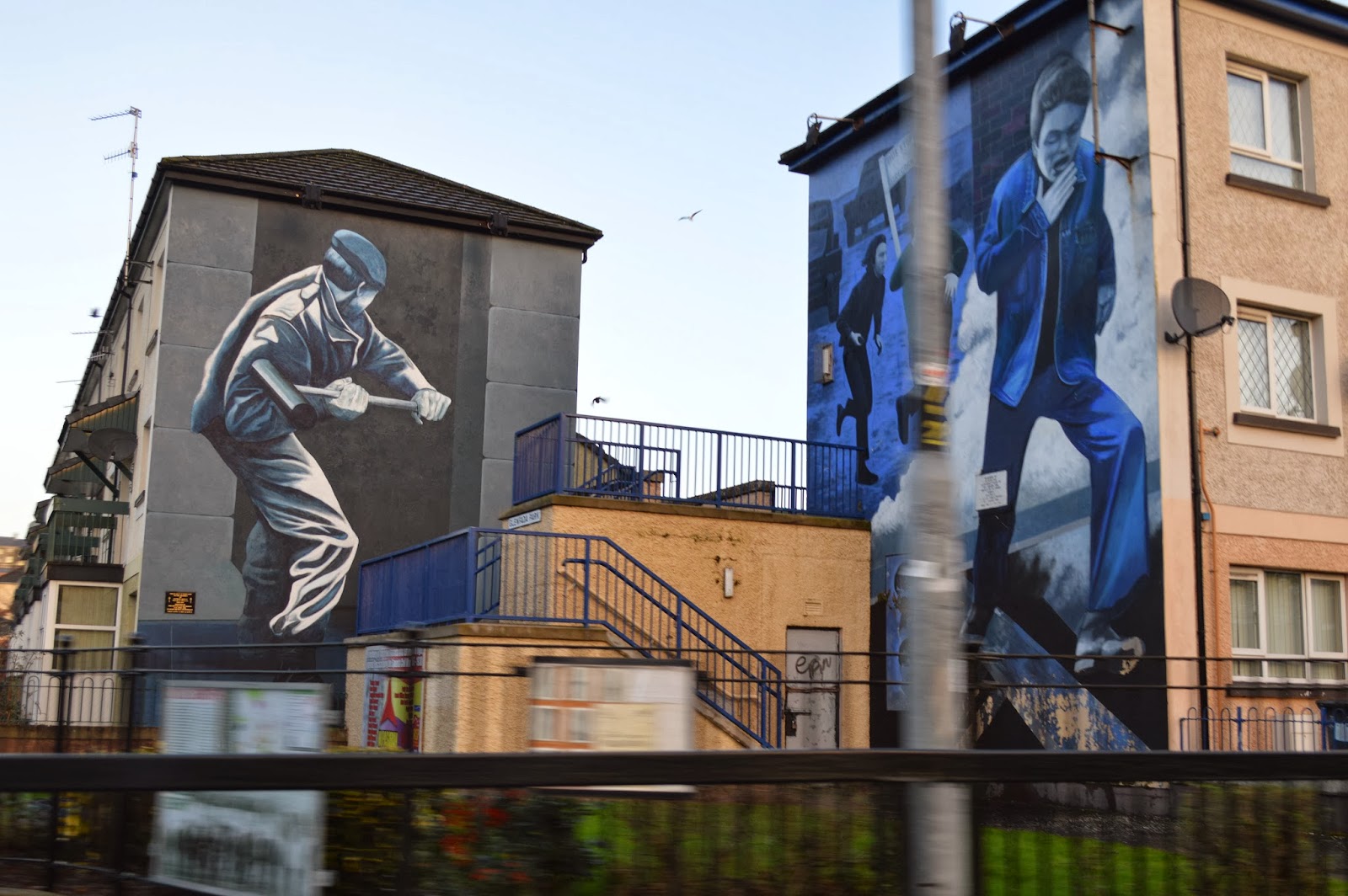 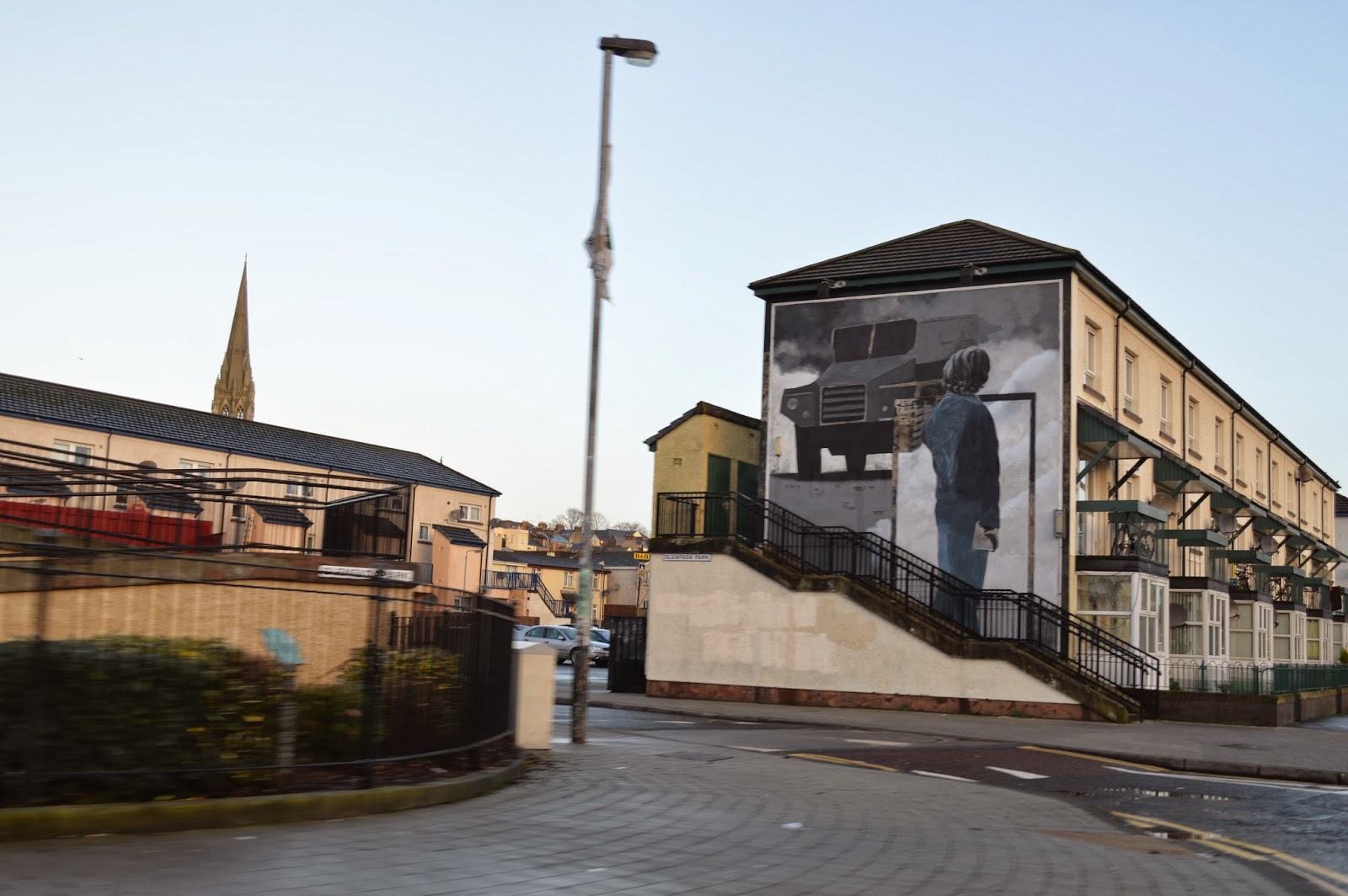 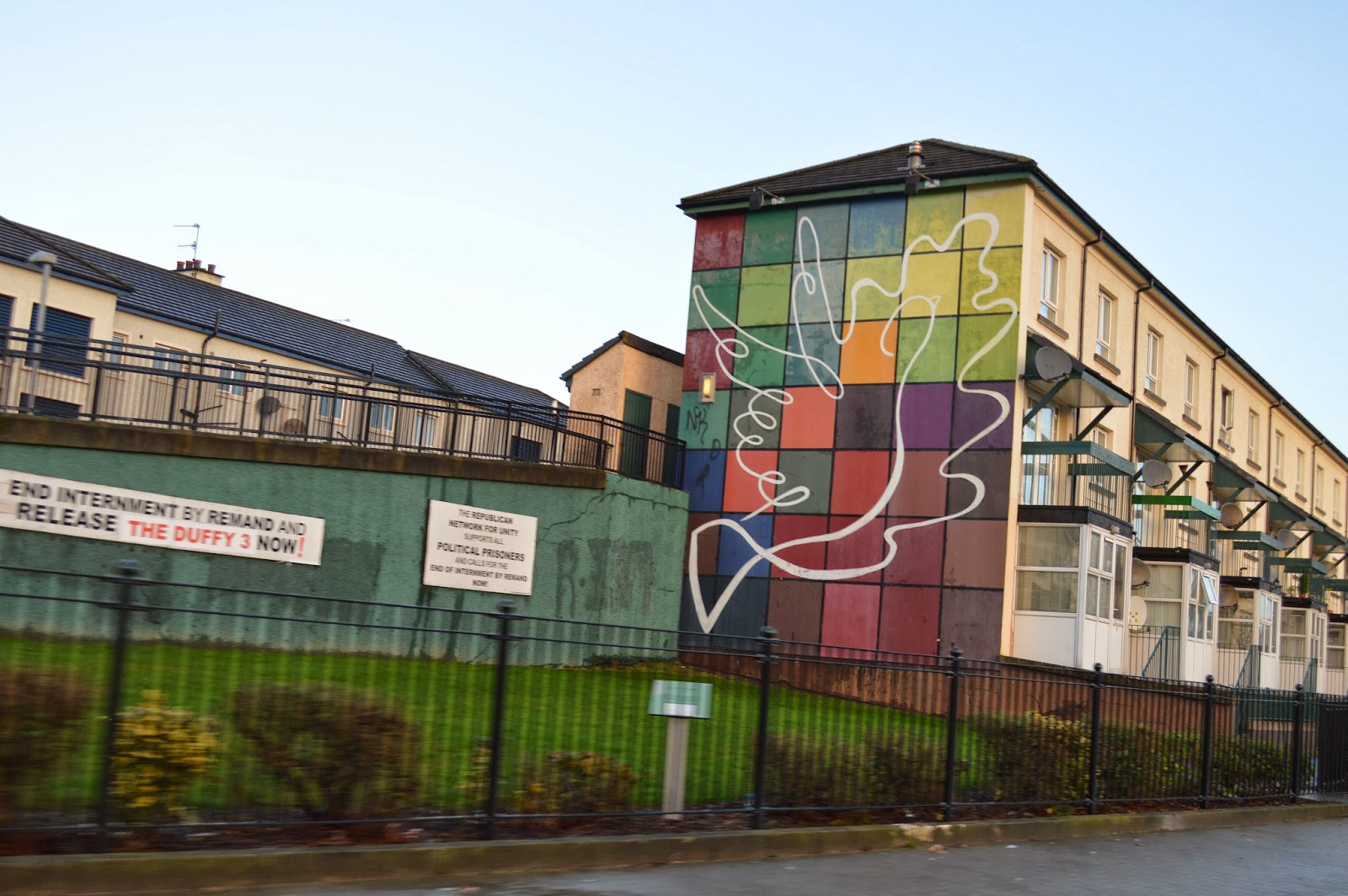 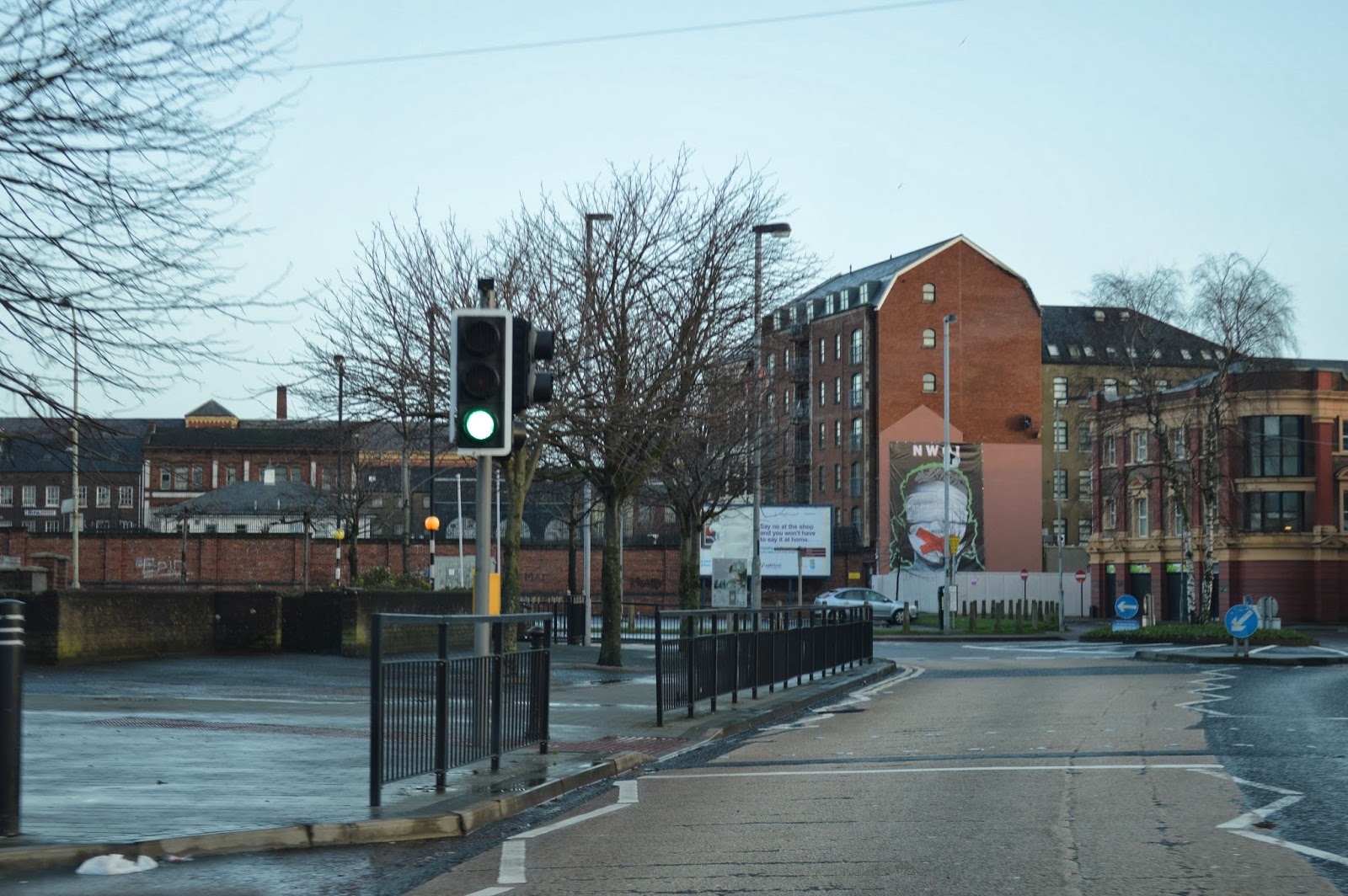 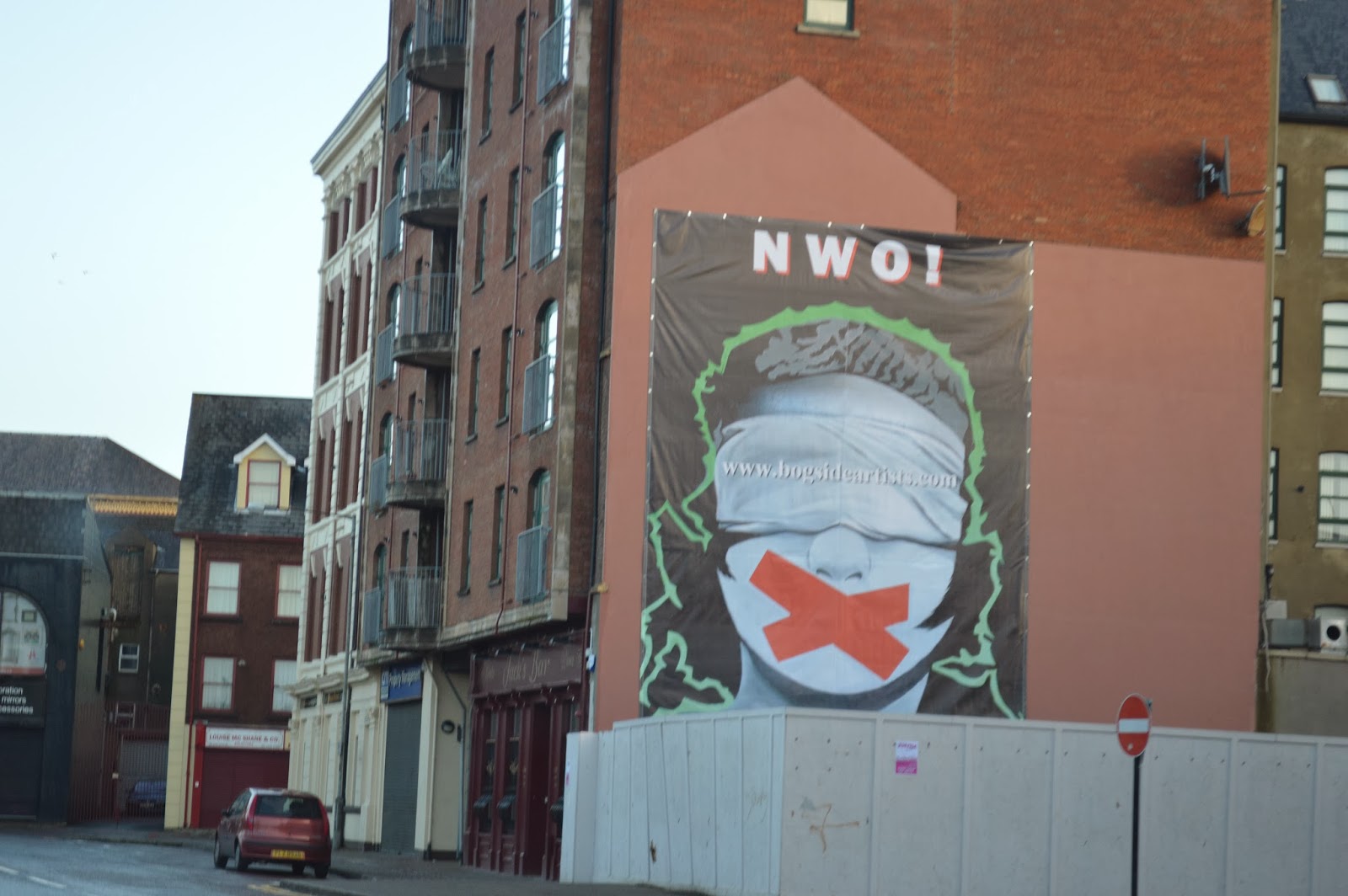 I didn't get photos of all 12 of the murals, but the ones I did get are powerful. I, for one am glad we went to Derry to experience this slice of history for ourselves. The guidebooks I have are disappointingly mum on this part of Londonderry/Derry's history which is disconcerting. I can only assume that it's a subject that's too polarizing for a fluffy guidebook.

While I'm glad that we went to Derry, as I said- I'm equally as happy that we cut our stay short. It's only in hindsight that I see how interesting and engrossing Derry really is, but having said that a day trip is plenty. We had planned to stay quite a few nights but realized that for us our time was going to be better spent elsewhere. Our awful colds were making it difficult for both of us to get a good night's sleep and I know that we were both yearning for a lie in (sleeping in to my US readers), and to be in the comfort of Dublin close to the pharmacy. Unfortunately this meant cutting out seeing the bulk of Co Donegal, but we did not fancy sniffling and coughing our way through the rugged and cold landscape. But it was not time to say goodbye to Northern Ireland quite yet, what we had planned ahead of us ended up being far more eye opening and adventurous than we could have imagined and a sharp contrast to the urban streets of Derry. So we said goodnight, set our alarm yet again and prepared for the unknown of Belfast and the coastal beauty of the Antrim coast.