After being wowed at Titanitic Belfast we jumped in the car and headed to the Antrim coast via Ballymena and Coleraine. It was so fun to see the countryside of Northern Ireland, but I always get excited the closer I get to a coast line. Seeing signs for the Giant's Causeway parking and buses all of the way in Bushmills, I became incredibly greatful that we were there in off season because we were able to park right at the actual site. 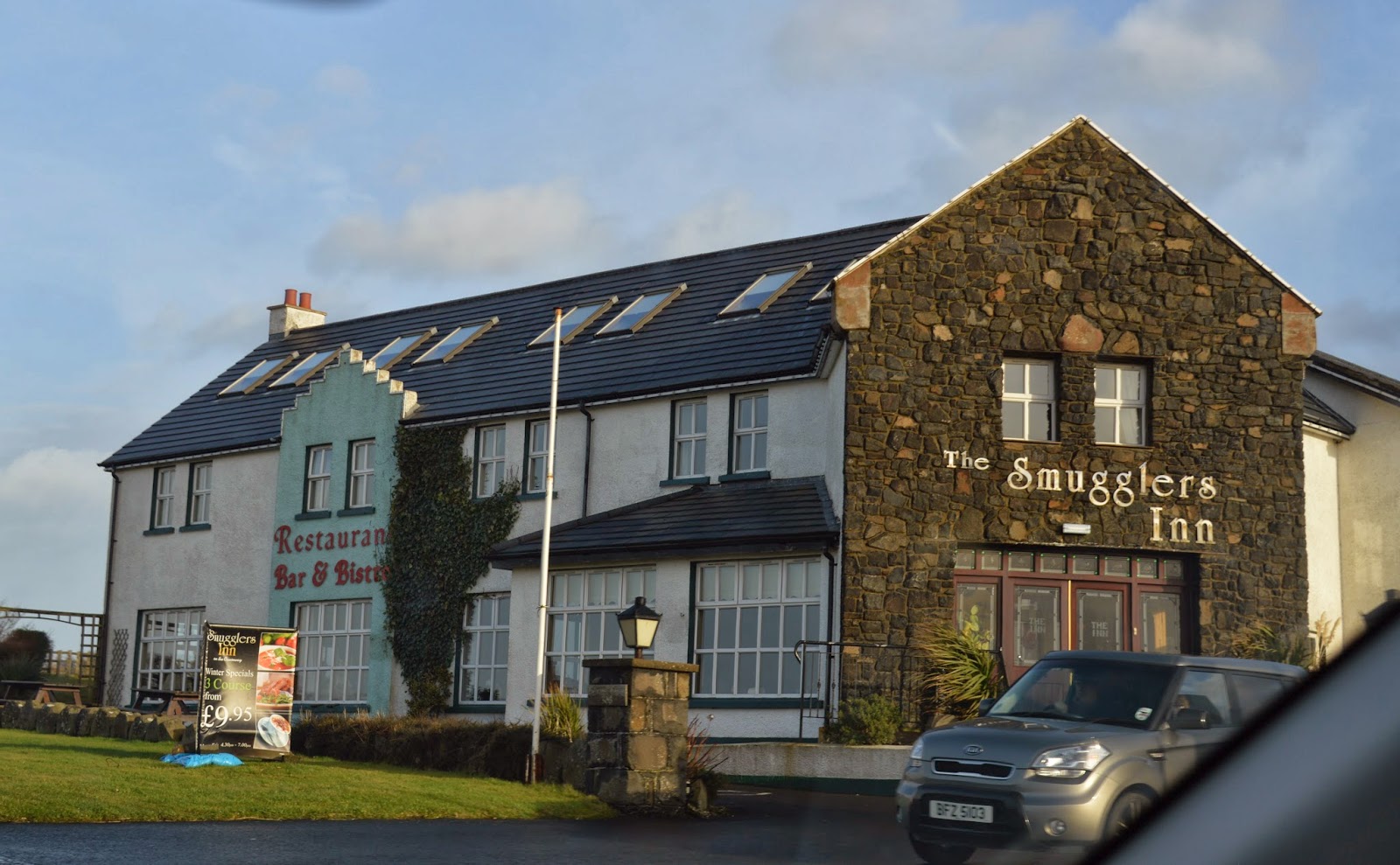 As with so many other days on this trip, it was windy and freezing. Just when I think I've already experienced a cold day and I think it can't get any colder, Northern Ireland goes ahead and trumps it! When we arrived it was bright and sunny, but bone chillingly cold. We bought our tickets (please note this is not a free site like many outdated websites state. There is a fee to see the causeway!) and started down the hill. The walk down the hill towards the actual basalt stone pillars that make up the causeway is about a 20 minute walk, where you will encouter the Windy Gap- which is literally the windiest spot on all of Ireland. You could lean into the wind, which was fun when it was bright and sunny- not so fun later... 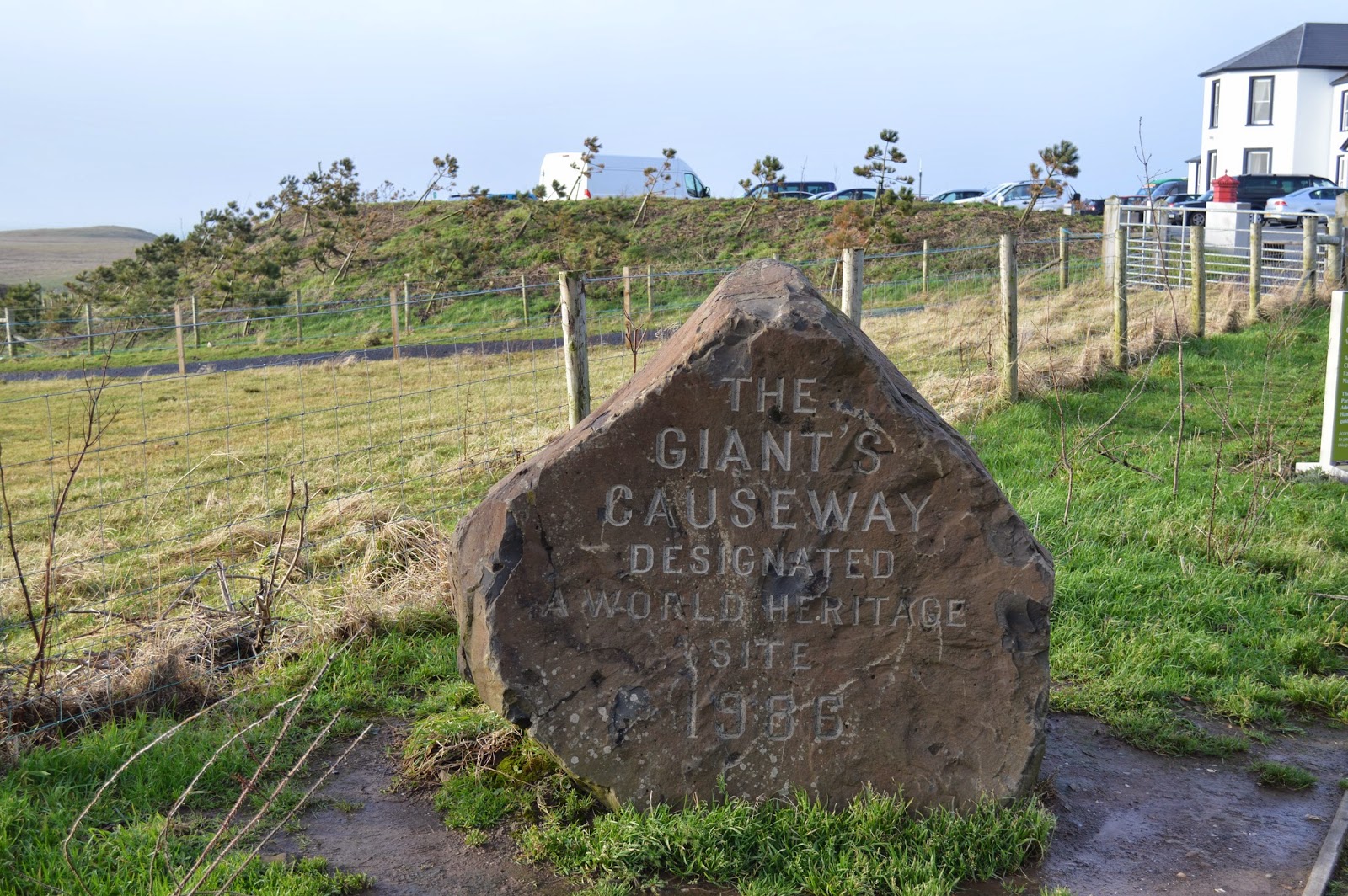 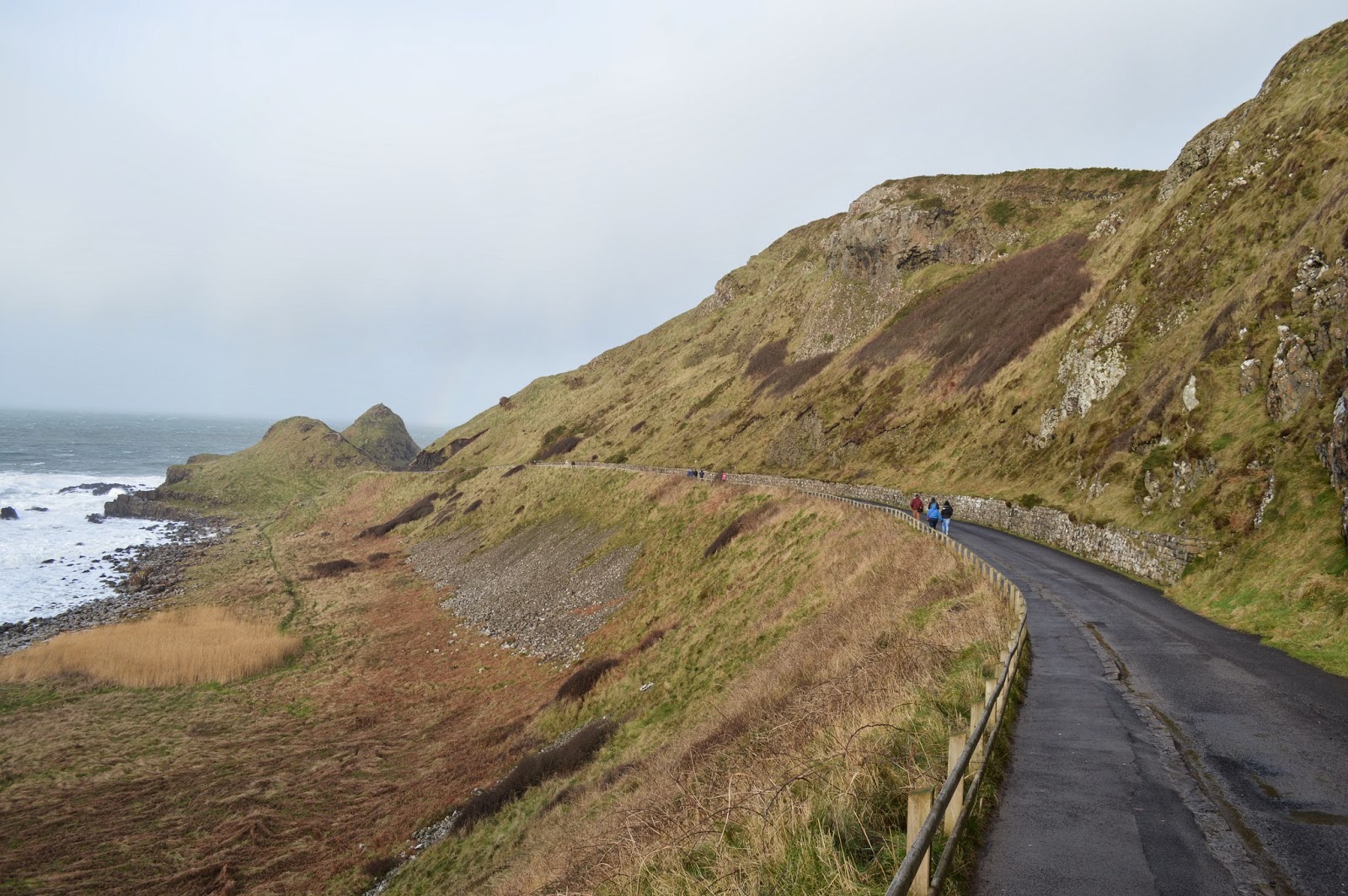 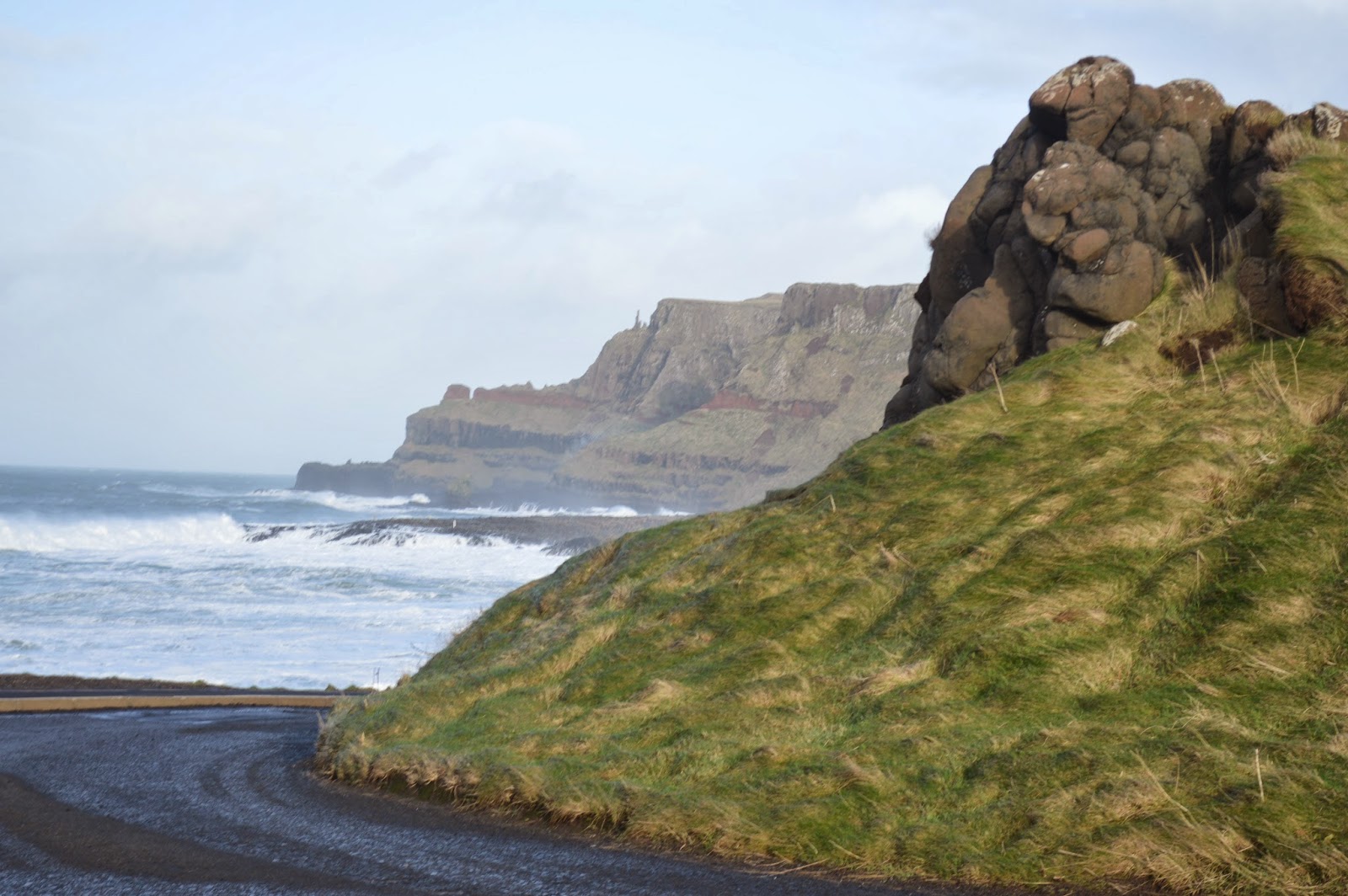 My guidebook warned not to be underwhelmed when rounding the corner and seeing the causeway stones for the first time. I'm not sure what people expect but it was exactly how I imagined it. They're not that tall and they don't tower over you but they are impressive. I don't know what elemental ingredients had to come together to form the columns beyond lava and water, but I found it unique and dramatic.  The thing that surprised me the most about this particular site is the fact that there are no barriers or rails. I appreciated and actually preferred this because it doesn't mar the gorgeous landscape but it's just not something I'm used to experiencing. The US is so about warning signs and keeping people in line, I'm assuming because everyone is afraid of being sued. It was refreshing to just simply have access to something. You can walk and explore the stones. The smaller of the 3 causeways is called The Little Causeway and you can traverse it fully. That is probably the safest of the 3 to explore. It's easily accessible, although I must mention that everywhere along the walkway and the causeway stones is exposed to the elements. Any moment a wave could crash over those stones, so you do need to be mindful of the wilds of your surroundings. 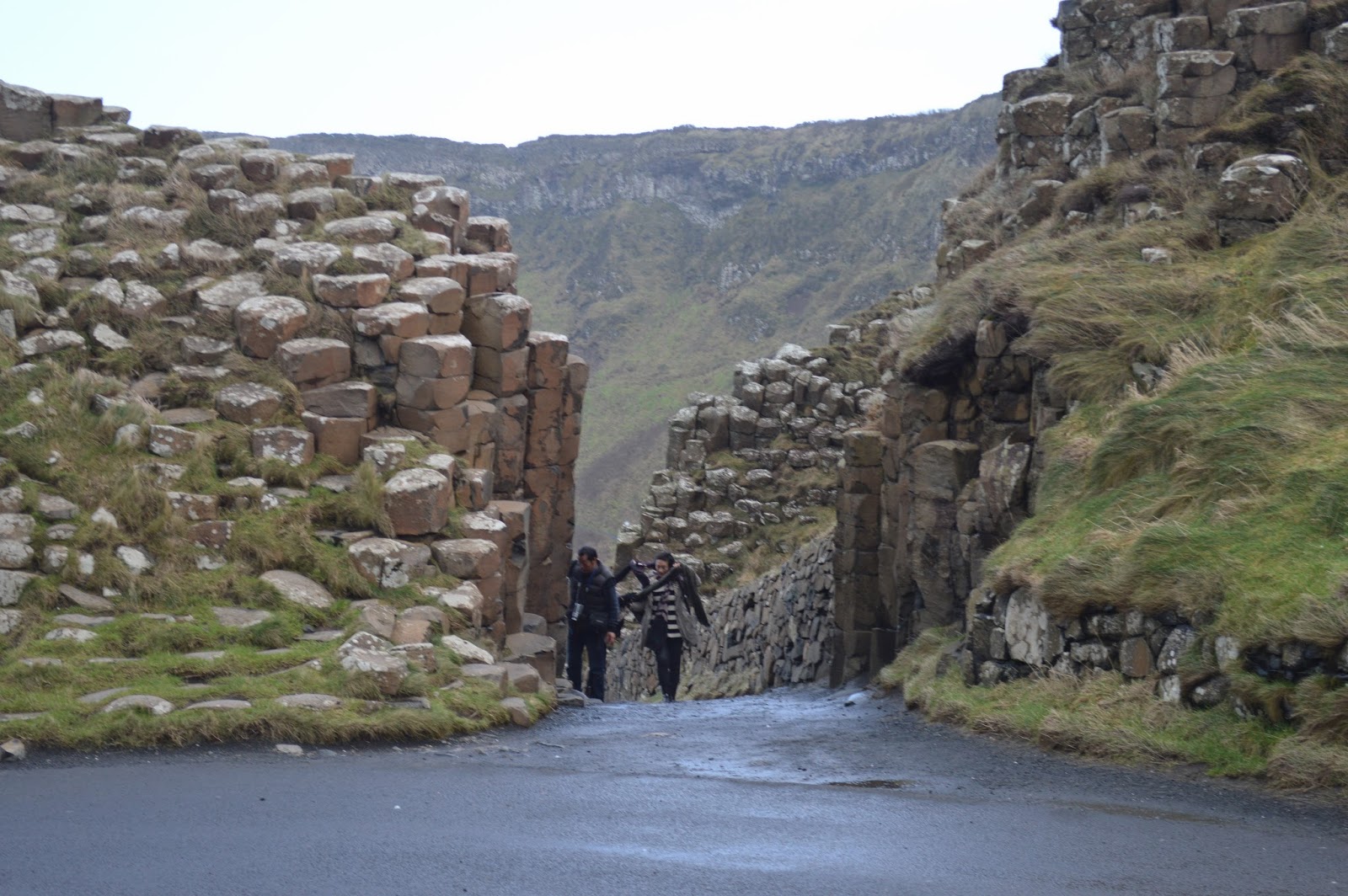 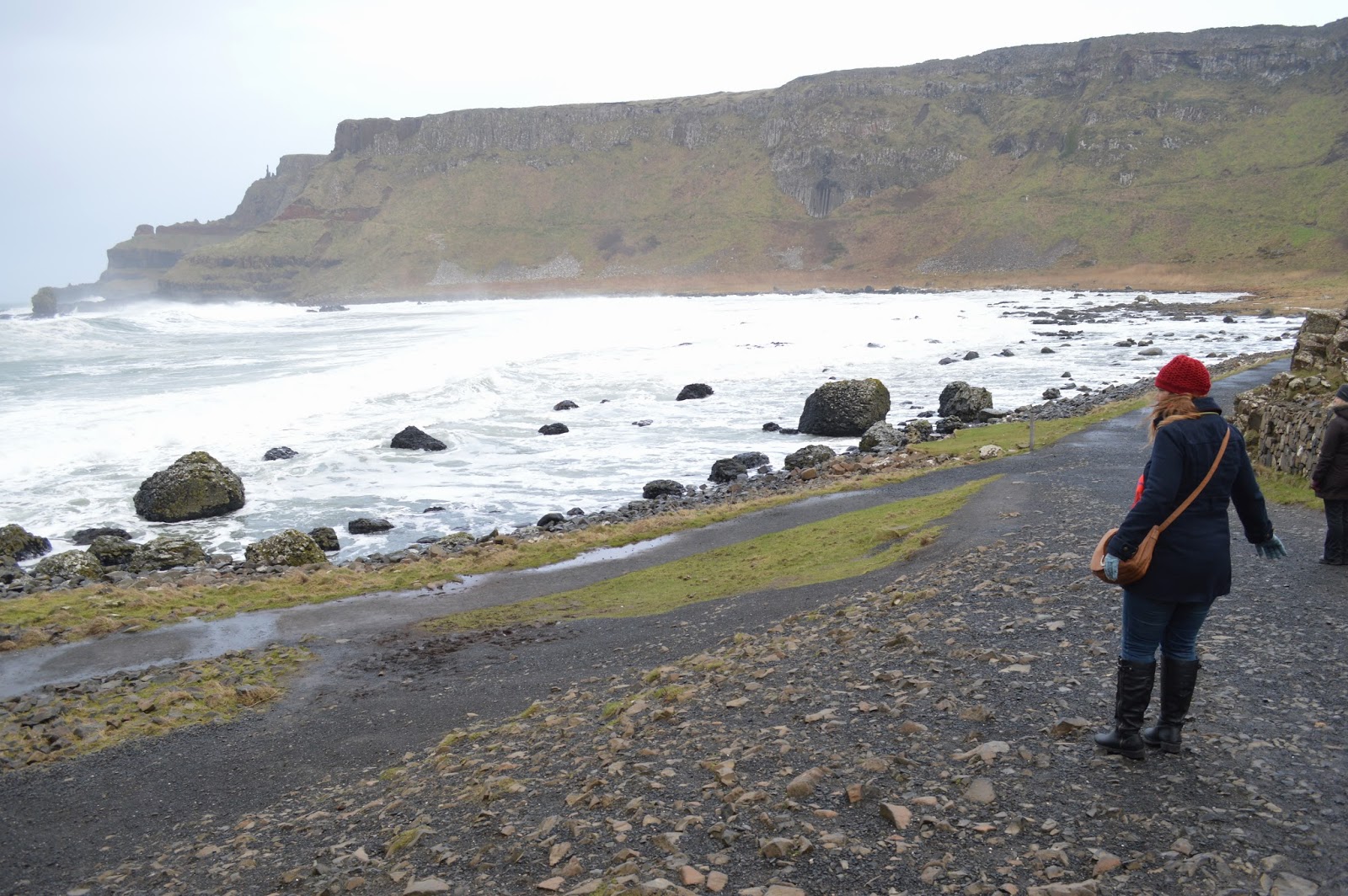 Those surrondings are stunning. You're flanked by the impetuous ocean on one side and breathtaking cliffs on the other. Just as we were admiring those cliffs something hit me just at the edge of my eye. It took me a moment to get over my shock and realize it had started to hail. At this point we had seen everything we had planned to see so we decided to hop the bus back up to the visitor center so we didn't have to walk in the hail and wind. This is where our day turned into an adventure...

My husband and I climbed aboard the bus and presented our tickets. Well, my friends much to our massive chagrin the bus driver informed us that our tickets didn't include the bus!! The bus tickets were an additional pound each. Well.... I spent all of our cash on buying the entrance tickets. We were up a creek my friends- up. a. creek. At this point it is hailing and that hail is quickly turning to buckets of rain pouring down at an angle from the Windy Gap. The bus driver did not take pity on us and we had to get off the bus back into the crazy weather. I felt like crying. I couldn't believe that he wouldn't just let us stay on the bus. He could have just waved us on. No one would have known that we hadn't paid- it wasn't like it was a bright sunny day and we were just being lazy- it was stormy outside. So with our nasty colds still very much in residence we walked back into the rain and hail with very heavy spirits.

That was one miserable walk. I had my hat pulled down to my eyes and my scarf pulled up to my eyes- with one eye squinted because of my previous experience with the hail saying it's hello. I know I was a sight, because at this point there was also black mascara running down my face! As we walked closer to the Windy Gap we met real resistance from the wind. I mean real resistance! We were bent at the waist and crouched doing our best to battle against it. The wind actually caused me to lose my footing a bit and I stumbled into the road. I'm not exactly a light, delicate flower so this was some force to push me! There is no photographic evidence of these moments- we were so busy feeling miserable and sorry for ourselves to break out the camera, plus I'm pretty sure my husband was being smart and didn't want to get water all over our fancy camera and ruin it. I do wish there was evidence though because it just sounds unbelievable and exaggerated. I know my husband agrees with me when I say that we felt like stupid tourists-  here we both were with horrible respiratory infections, that I for one was very nervous about turning into pneumonia, completely exposed to the harshest of elements all the while walking up a steep hill against a heavy wind. Just brillant. If there was ever a moment in my life that I thought I was going to look back on and think, "Gee, and you wonder why you ended up in a hospital?", this was the moment. You know when people do stupid things and end up seriously hurt or in trouble and you just think, "well, duh!" Yep, I don't even need to say it.

Slowly we made it up the hill- passing people willing to brave the weather and some who turned back before they even began. One girl was in high heels and all I could think was, "this is not a time to try to be sexy for your boyfriend, this is a time for sensible clothes darn it!". I know we looked like drowned rats. I've never been so uncomfortable in my life. My clothes were soaking wet, and I hate the feeling of wet jeans on my legs! My hair was plastered to my cheeks and totally unattractive. I unceremoniously dumped my audio guide in the bin and turned to be greeted by none other than the bus driver. Your ticket is required to get back into the visitors center so my husband and I were both patting pockets to locate ours when the bus driver caught sight of us and waved us through the door- he said he didn't need to see our tickets and to just get inside. I think he finally took pity on us when he saw the state we were in. I really wish I had thought to take a picture when I finally saw myself in the bathroom mirror. This my friends was a moment for a bathroom selfie if I ever saw one. Honestly I was too crabby to take one. All I could think about was peeling my pants off and throwing my soaking wet hat in the closest trash can.

We hastily bought our souvenirs and high tailed it back to the car. I have never taken a coat and gloves off so quickly. Ick is the only word I can think of to describe that feeling. We sat in that parking lot, steaming up the windows for ages, wasting fuel to power the heater full blast.  What a day.

Finally we got back on the road to head back to Derry for the night. It's amazing how an effective heater can change your perspective on things. We got less and less grumpy as the miles flew by and we dried off a bit. I was even enthusiastic enough to jump out with no jacket to the edge of the road to get pictures of Dunluce Castle. I would have loved to have toured the medieval ruin but it had an entrance fee so I was content to just get photos from the side of the road. 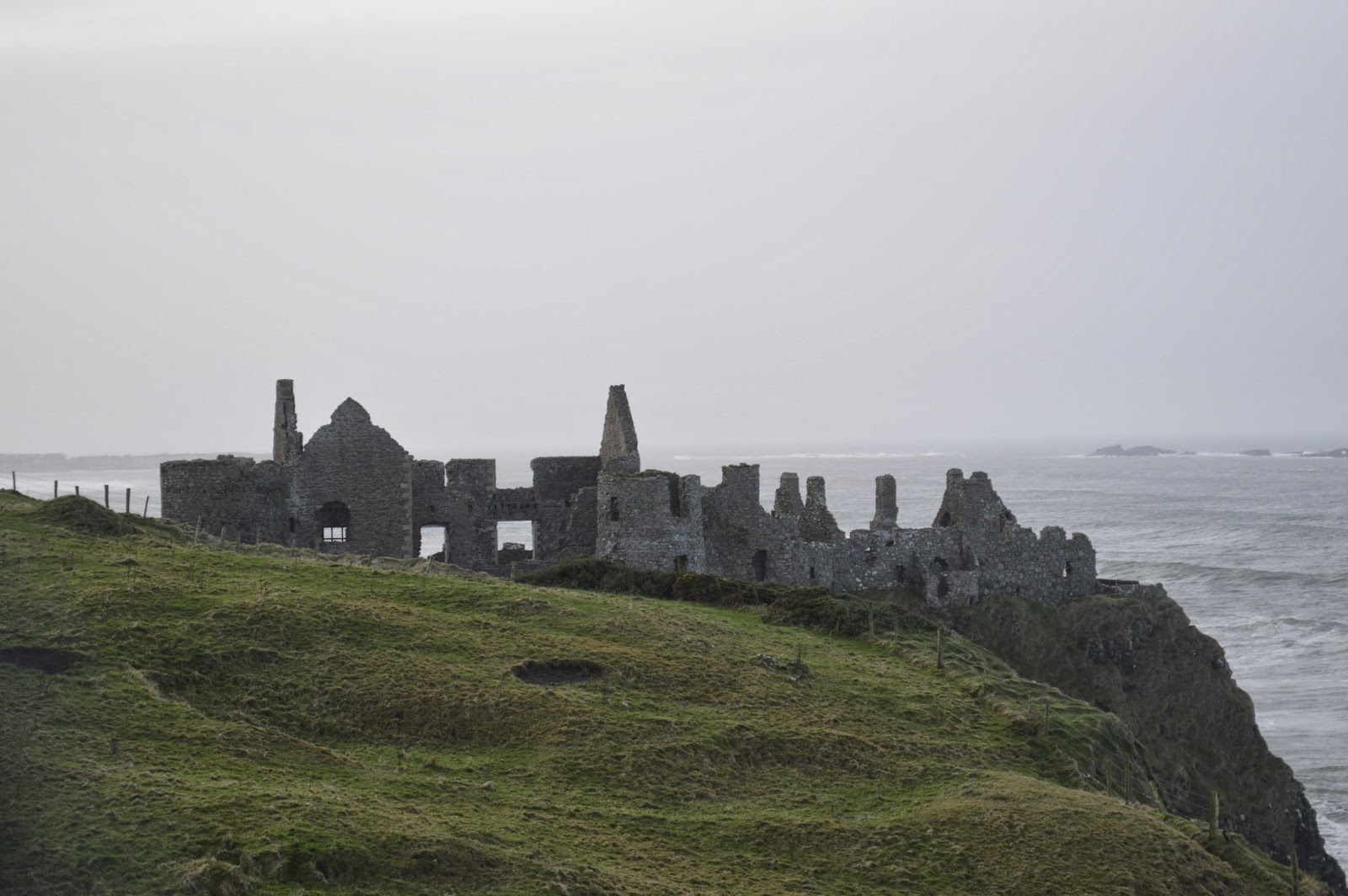 In Portrush we stopped for giant bars of Cadbury Dairy Milk chocolate and cold medication. We were won over by the colorful row houses in Portrush and briefly wished to live there until we remembered how cold it was outside of the car. 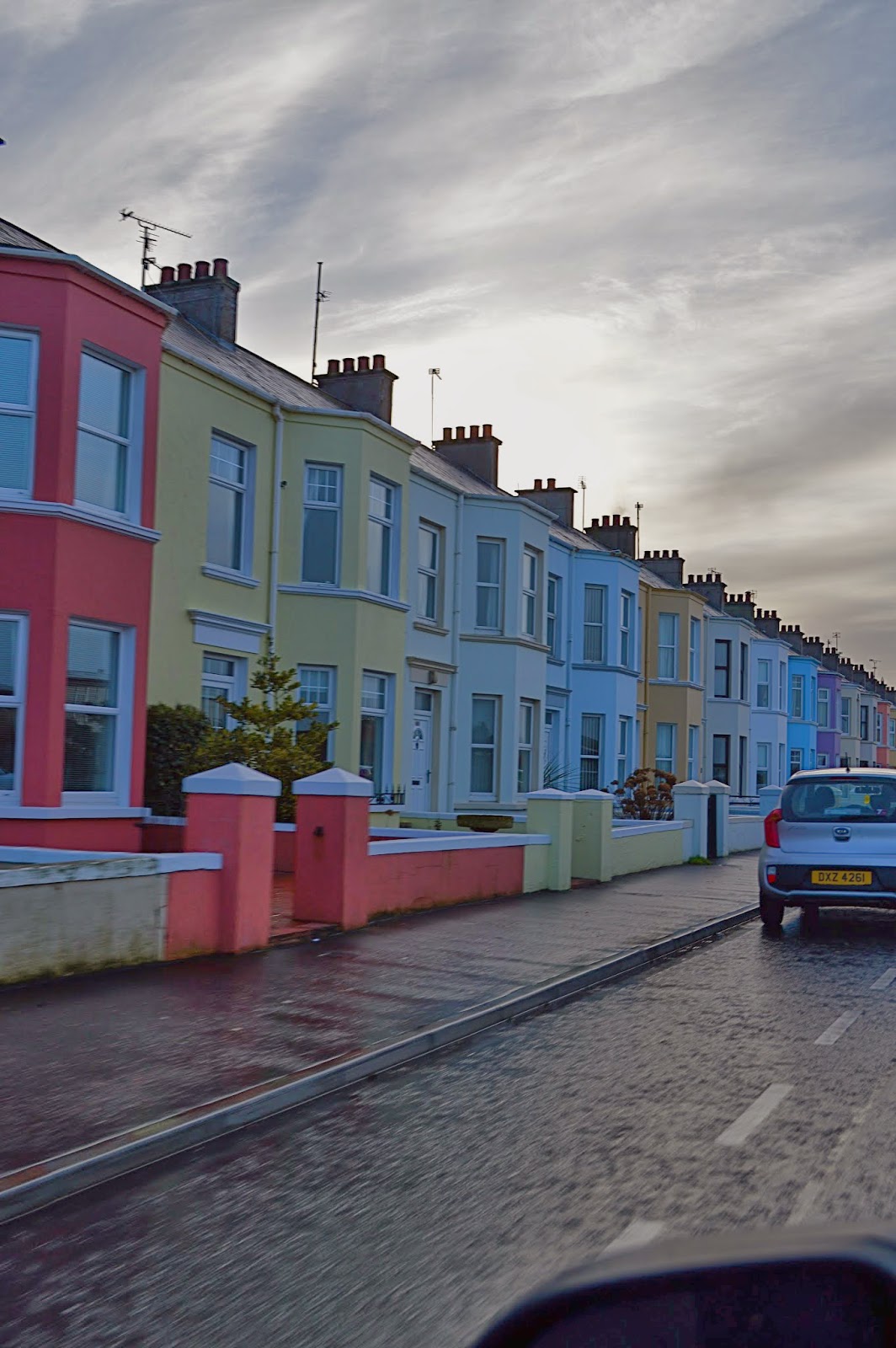 The drive back to Derry was lovely and apart from a brief flurry of snow it was pretty uneventful. The Antrim coast and the A2 back to Derry was beautiful. I really wish I could see it in late spring or early summer when I'm sure it's at it's best.

Looking back on this experience even as early as an hour after it happened we realized how amazing it was. It was miserable at the time but we survived it and it certainly was unexpected. I can now say I've battled wind and rain and made it to tell the tale. I didn't even have to endure any, "Well, duh." moments afterwards because neither of us ended up in a hospital. (although we did both endure a horrible nights sleep endlessly coughing, which I'm sure wasn't helped by our exposure.) It was a surreal experience and I fully expect never to have one like it again. I suppose everyone must collect a story like this in their life at some point- it proves a life well lived, although I'd be lying if I said I didn't feel a little like a hobbit on a grand adventure who really should just be home having second breakfast, because well, adventures are nasty things, right Bilbo?