One of the things most European countries are good for are historical sites. You can't go too far without bumping into one. Part of the reason for our trip was to visit my in-laws in their village of Scrooby (see previous blog post) which stratles the border of Nottinghamshire and Yorkshire. Scrooby is quite small so when you've walked it once you've seen it all, which left us with a lot of time on our hands during our 2 day stop over on our way north. Fortunately for us about 10 miles from Scrooby is the English Hertiage site of Conisbrough Castle. 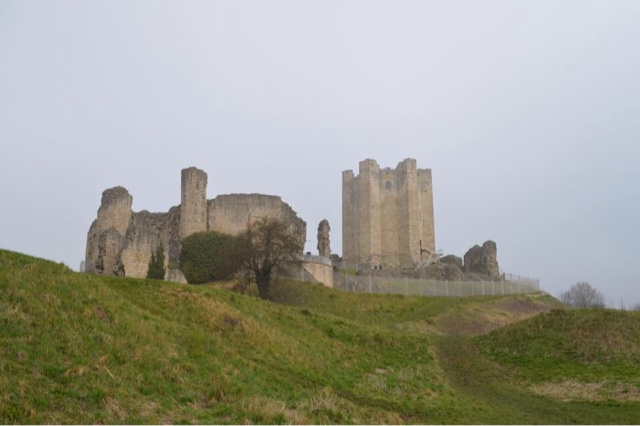 Photo: View of Conisbrough Castle, walking up from the car park. Looking isolated and rugged.

If you look at photos of Conisbrough Castle it looks as though it is out in the countryside far from any urban areas or population to speak of, but it is in fact surrounded by the town of Conisbrough. My first view of the ruined castle and it's high keep was from the walkway from the car park to the Victorian lodge building which houses the gift shop. It's a spectacular scene, you are instantly transported to another time as you step away from the modern car park towards the quiet limestone plateau. We had the advantage of being one of the few groups of people there that morning. There was a family of four, and another 2 couples wandering the grounds when we arrived so we were often completely alone in the different rooms in the high keep. It's magical to have historic ruins to yourself, we experienced this on our trip to Ireland in 2014, it's one reason my husband and I like to travel in the off season so much. We don't always have perfect weather, but we often have tourist attractions to ourselves. If you have an active imagination like I do then being alone in a castle tower is spellbinding- I could definitely imagine what it would have been like when it was built in the 12th century. Although it was cold that March morning it was worth the discomfort to be able to sit completely alone in the tiny chapel on the second floor. 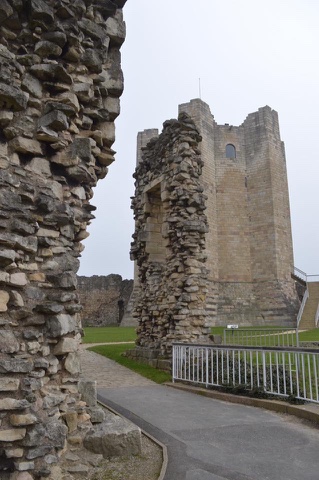 Photo: passing through the Barbican- a structure once designed to hinder enemy attacks- looking to the remains of the east wall of the gatehouse and the great tower in the background. 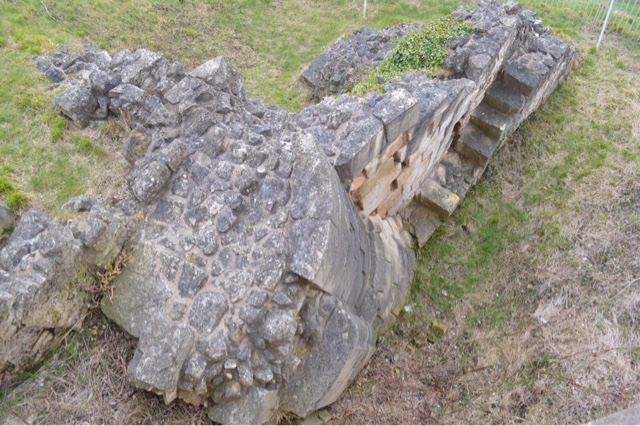 Photo: looking down at the ruins of the fallen gatehouse tower. You can see the steps for what would have been the wall-walk 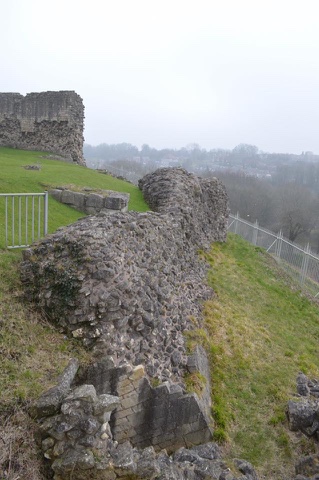 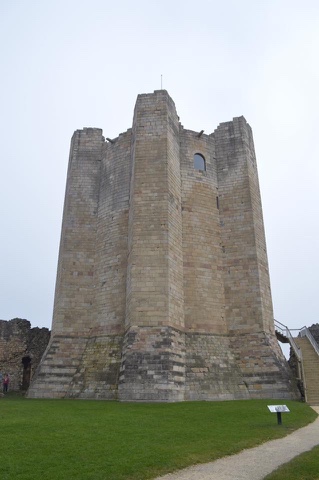 Photo: the great tower, built in the 1170's or 1180's by Hamelin de Warenne, made of locally sourced limestone. 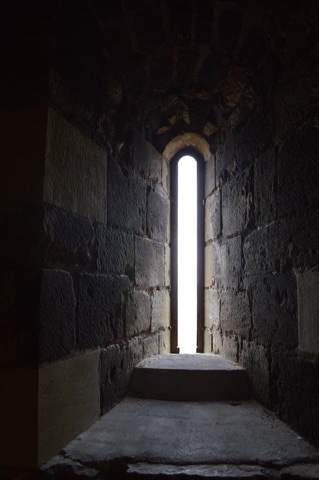 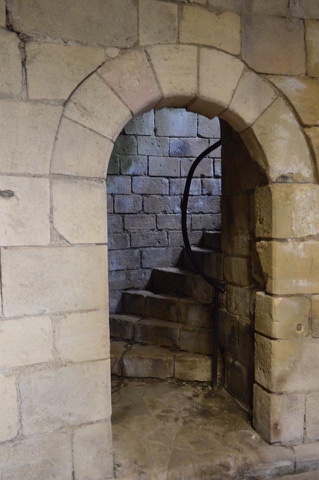 Photo: window in the stairway 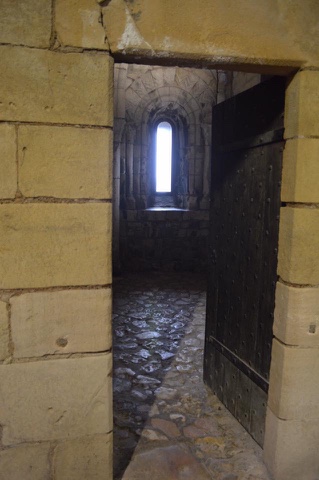 Photo: stairway leading up to the roof. 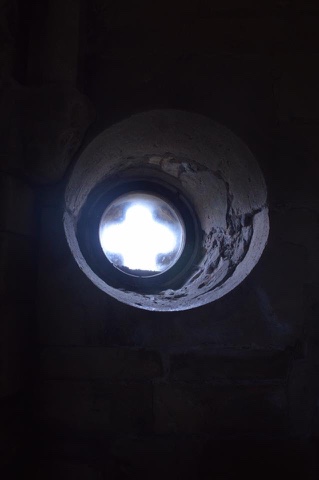 Photo: a view inside the chapel, seen from the third floor bedchamber.

Photo: small quadrilobe window in the chapel. This window overlooks the entrance to the tower below- signifying divine protection to visitors. 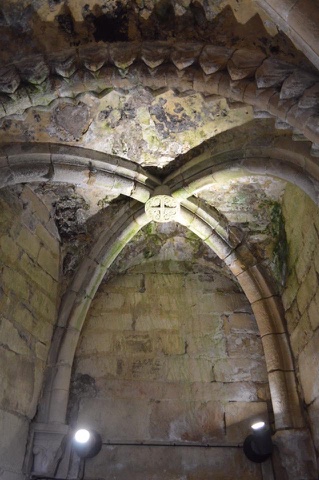 Photo: ceiling in the small chapel. 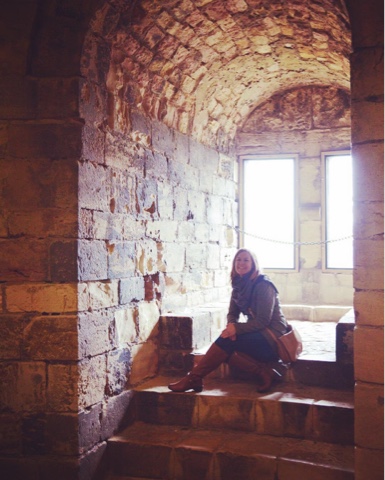 Photo: being Lady of the Castle in one of the deep windows on the third floor.

One of the cool features of Conisbrough Castle are the wall projections that greet you in each central chamber. They depict a person connected to the castle's history- they are there to tell you the story of the castle and the uses of the room you are in. It was incredibly helpful, as the rooms as they are now are empty and their purpose was not immediately clear.

We made our way up to the roof where we had a 360degree view of Conisbrough, the inner bailey of the castle, and the spectacular Conisbrough viaduct in the distance. In person the viaduct is impressive- unfortunately in all of our photos it is hard to make out because it was a hazy day, but from our vantage point we could make out the arches, looking to me like something from Roman times and not something that was built in the early 1900's. 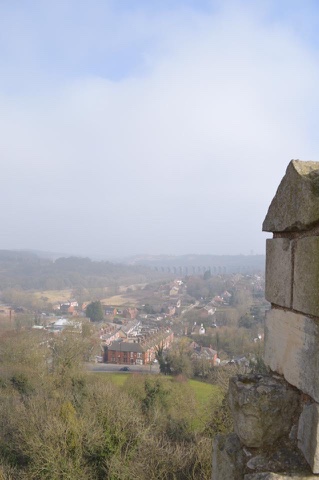 Photo: view of the Conisbrough viaduct in the distance. Unfortunately it was quite hazy, so this photo doesn't do it justice but it was spectacular in person. 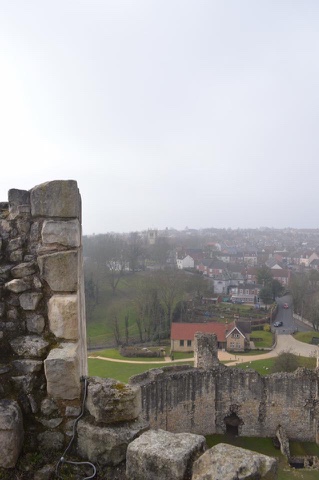 Photo: looking down from the roof of the great tower at the remains of the inner bailey, which contained domestic apartments and the latrine chute from this view. You can also see the red roofed Victorian Lodge visitors centre. 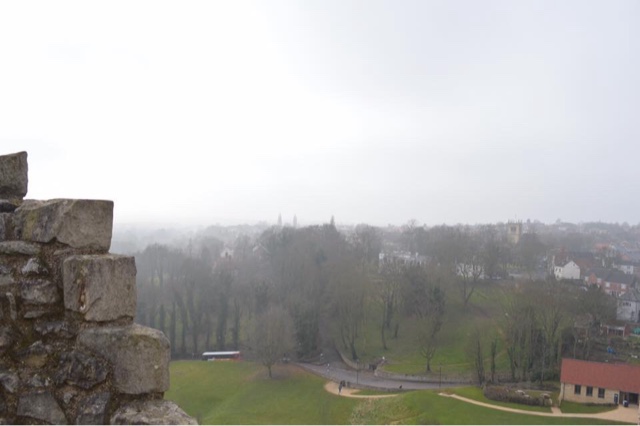 Photo: looking out over Conisbrough. The visitors center can be seen in the bottom right corner. 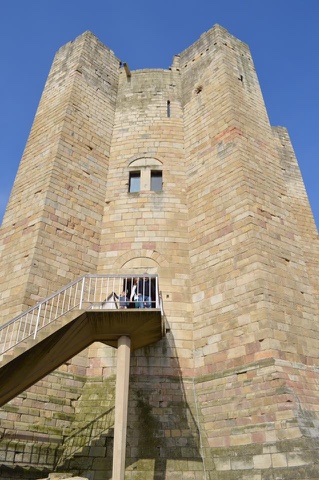 Photo: the tower entrance, which is reached today by a modern staircase would have originally been accessed by a free standing staircase with a timber drawbridge- that could be dismantled in times of attack. 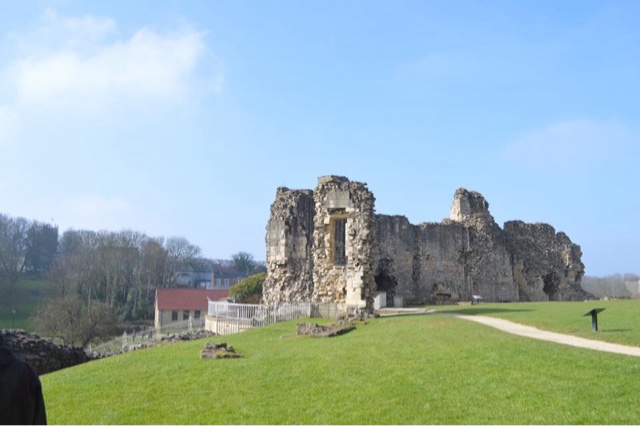 Photo: looking back towards the gatehouse, curtain wall and inner bailey.

We really enjoyed our morning walking around and exploring Conisbrough Castle. It was a unique experience and an awesome step back in time. If it hadn't been so cold we would have stayed longer, but alas it was really chilly and we also had a date with some fish and chips at The Ship (see previous post for review) that just couldn't wait.