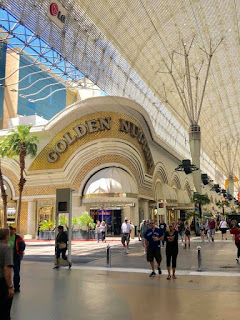 What is the one thing my in-laws were told to do while in Vegas? Fremont Street. At first I was trying to wrap my head around my English in-laws wandering old downtown Vegas. The lights, the zip line over head with screaming people, the street performers with legit old school boom boxes- how would this all go down? And then I remembered that my father-in-law is happiest in a dark pub or a dive bar in Spain. The last time they came to visit us in California my FIL somehow found the oldest, hole in the wall dive bar the town has to offer. We have world class wineries where you can taste any vintage or varietal that you want- people travel from all over just to experience our wine country, but he sought out the place where the carpet doesn’t meet the walls and there is a stain on the wall that has probably been there since 1985. Why was I worried? FIL would fit in like any other fixture on a bar stool.

When we arrived on Fremont Street we were all starving. It was lunch time and many hours since breakfast. The very first thing to greet us when we emerged out of the parking structure is the classy joint known as Heart Attack Grill. After learning that 2 patrons had heart attacks in the restaurant, one woman fell unconscious while eating there and their 575 spokesman died at the age of 29, I took a look and realized that 2 out of the 4 of us had hereditary high blood pressure and I for damn sure wasn’t donning the required hospital gown to eat. We bypassed (yeah yeah, bad pun) the restaurant to find something else to eat but not without wondering if we should have done it anyway and sent the Brits back with a crazy story to tell. 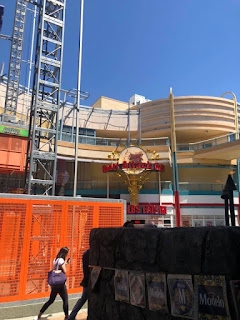 Surprisingly there weren’t as many food options on Fremont Street as I thought there would be. Perhaps we didn’t know where to look but we had some picky eaters on board. I have to admit, I can be one of those picky eaters. I’m not a meat eater if I can help it. I’ve been vegetarian most of my life and my FIL will only eat meat. Meat and potatoes. Not a hint of a vegetable. I’ve watched him practically melt down like a toddler at a steak house when they asked him what kind of salad dressing he wanted with the included house salad. He wanted no part of that salad and was so vocal Daniel had to finally tell him to chill out and that he would eat the salad for him. He visibly recoiled when it was placed in front of him. It’s a mystery to me how he is still upright and walking. Where on earth do his vitamins come from? 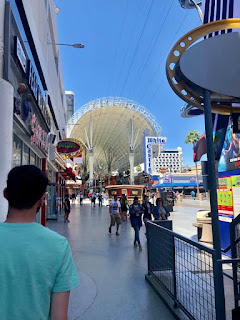 After much walking we settled on a tiny Mexican take out place somewhere near the Golden Nugget. They had a small menu and even smaller tacos. When we ordered none of us realized that they were the tiny street tacos you sometimes get from taco trucks. I got the worlds smallest cheese quesadilla with thick, barely melted cheese and everyone else got some form of meat taco. I can assure you we all walked away from that table hungry. I also learned that my FIL will raze a nation if you get him any other soft drink than root beer. The fit that he had when Daniel’s step mother and I arrived at the table and handed him a sprite was a sight to see. He didn’t want that by god, where was his root beer?! Why were we handing him a sprite? Were we mad? He finally calmed down when he found out that his only options for sodas had been Coke, Diet Coke and Sprite. He accepted his drink but not without some grumblings. This was America, wasn’t root beer everywhere?  I sipped my first real Coca Cola in at least 5 years and stifled laughter. Note to self: root beer is the way to my FIL’s heart.

With our tiny meal over we walked around watching street performers and women getting their pictures taken with Chippendale’s. Boy that was a sight! If you had any doubt that you were in Vegas this would place you firmly back in your reality. There was booth set up with a muscular man in the recognizable Chippendale garb of a bow tie and tight black pants. No shirt, no shoes? No problem- you’ve come to the right place. We watched as tipsy woman after woman got their photos taken while being tossed around and squished between these burly men. I started to wonder how drunk I would have to be to consent to this myself? Not only consent but PAY for the experience. Call me a prude but had they approached me and tried to pick me up off the ground like that I would have run screaming.

It was at this point that Daniel and I realized we had lost his dad yet again. Remember in my last blog post when I mentioned that we lost said FIL many times while we were in Nevada? Well here we were again. Scanning the crowd, cursing the fact that he had chosen to wear a black t-shirt today, much like 90% of the crowd. Was that him next to the showgirls with white feather headdresses? No... Wait, is that him in line for the zip line? Oh, that’s a no again. Walking into Slotzilla? Negative yet again. Ah, but who did we finally catch sight of? Standing on one the side streets in the unrelenting direct sunlight was Daniel’s stepmother. At least she had worn a bright red and white floral sundress otherwise we could still be wandering Fremont Street in search of them today. We sauntered over and asked her where her errant husband could be found. She rolled her eyes and pointed to the storefront just to the left of where we were standing. Folks, my FIL had diverted to The Beef Jerky Store. 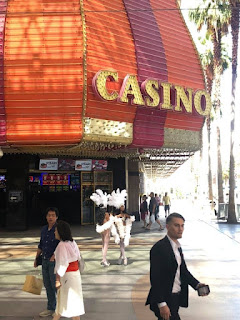 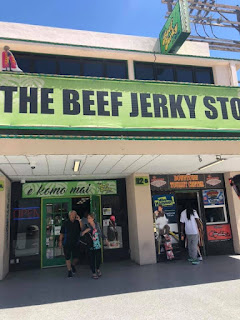 Yes, a store devoted to beef jerky. We were to find out shortly that it was actually devoted to basically anything dehydrated. Jerky of all kinds of meat options, but also dried fruit, and candies. If it was shriveled and lacked moisture they were your one stop shop. I don’t know how long he’d been in there before we arrived but he took another 15 minutes before he emerged from the store with a large plastic bag in hand. What did he find to his delight? Dried mango. Oh and ginger candy chews. I think he bought odd types of jerky but it’s the candy that he offered us. Whew, it’s amazing that any of us had our dental work intact after sampling those candies. Ah, Vegas. I remember it fondly. That’s where I accidentally swallowed my porcelain crown.

Passing many a wedding chapel and fenced construction site we made our way back to the Mardi Gras to drop off our passengers for the day, beef jerky and all. Daniel and I were ready to check into our new accommodations at Caesar’s Palace. Man, was I happy to leave the Mardi Gras in the rear view mirror. Knowing we were staying at another hotel (especially Casear’s!) the next two nights lifted my spirits considerably! We still weren’t having the vacation I would have chosen but we were getting a little closer and that was exciting! 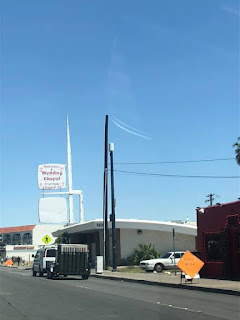 I’ve mentioned before that Vegas isn’t my kind of place and it’s not where I would have chosen to be but I was never so happy to be on the strip again. I breathed a big old sigh of relief when we parked at Caesars and made our way inside. The first thing that struck me as we made our way to the lobby was how crowded it was. I’ve never seen a hotel check in like it! It reminded me of being in an airport. It took us about 20-30 minutes just to get checked in. To be honest I didn’t care, we weren’t going to have to spend another night at that other hotel so I’d gladly wait. 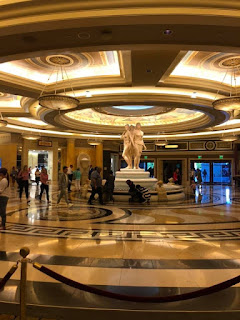 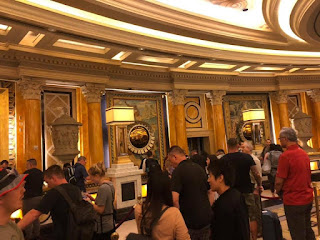 So here’s an interesting thing we learned while at Caesar’s Palace- some hotels put their mini bar on a weight sensitive surface which tattles on you if you even breathe on a product. The woman who checked us in warned us of this fact but honestly I thought I heard her wrong. In my mind there was no possible way that the entire refrigerator was touch sensitive. Not only was it touch sensitive but so was part of the top of the desk where the snack part of the mini bar sat. I was terrified to touch anything in that room lest we find a $400 charge for touching a bag of chips. So needless to say we didn’t use the Keurig or open the fridge for longer than 10 seconds just to investigate.

That night I climbed into that big, clean bed in that gloriously clean room and thanked my lucky stars that I wasn’t in that nightmare of a hotel on Paradise Road. 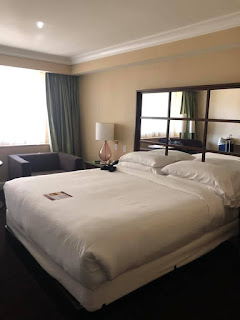