17. A Royal Wedding is Nigh

Dr Foster went to Gloucester,
In a shower of rain,
He stepped in a puddle,
Right up to his middle,
And never went there again... 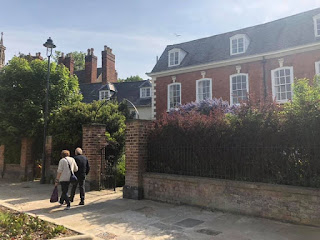 We left Bakewell in the early afternoon and made our way south to the West Country. Our destination that day was the city of Gloucester (which rhymes with Foster like the above nursery rhyme). I didn't know anything about Gloucester before we went but we figured it was a great place to stop before we started to make our way towards London and the plane to take us home.

We chose Gloucester specifically because it is part of the Cotswolds, has a grand cathedral, and lots of choice for affordable, but nice accommodations. Really, it was the lure of the accommodations that brought us there. We had stayed a few times at Accor, Ibis, and Mercure hotels (all owned by the French parent company of Accor)- so when looking for accommodations I went onto their website and searched for hotels within an hour or so of our last nights stay in Watlington. We zeroed in on the Mercure Gloucester Bowden Hall. The 18th century Bowden Hall, located in the village of Upton St. Leonards is only about 5 miles from the city of Gloucester. 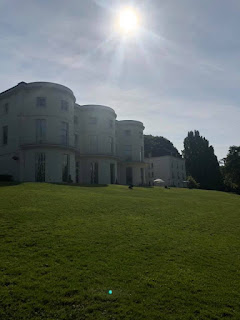 It was the perfect location for us- set on 12 acres- you definitley felt like you were in the middle of the countryside- but the bustling city centre of Gloucester was only a 15 minute drive away. The house, originally called Creed's Place, has a storied history. Built in 1770 by Robert Campbell, a retired London Grocer (wow, the grocery business must have been big then!) it was owned or rented by a series of individuals and organizations; an East India Planter, a London goldsmith, a schoolmistress, a woman who kept buffalo and giraffe on the property, a Yorkshire woollen merchant, an Air Raid Precaution Center in WWII, a Girl's Approved School, and eventually in 1976 a hotel. 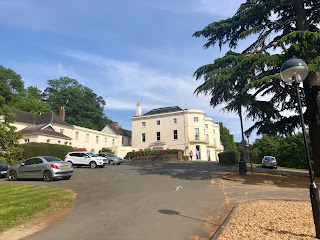 We pulled up to the hotel after a very windy, country drive. Thank goodness for GPS- we would have had quite a bit of trouble finding the hotel otherwise. The hotel has a vast parking lot which was a welcome sight to us. As I've mentioned before, parking isn't easy in England and it's our number one factor when choosing a hotel, followed by cost, and then type of hotel. I'm always blown away by how inexpensive really nice hotels are in England in the off season. We've stayed at 4 and 5 star hotels for less than $140 which is unheard of in California. Bowden Hall falls into that category- it is a 4 star hotel and we only paid the equivalent of 84 US dollars. It's hard to believe our luck when we're there.

I fell in love with our little room several stories up on the back of the building with gabled windows. The rooms have a Beatrix Potter theme referencing her short story, The Tailor of Gloucester. It was a really tastefully decorated room and the bathroom had the required deep, and spacious tub. We had a view of a lush, grassy hill which made the whole thing feel like we were in a cottage in the countryside far from other people. We reluctantly left the room to head out in search of food and a Tesco for petrol. It was on this little outing that we realized just how close we were to a populated town. In England you're never far from people but also the countryside. 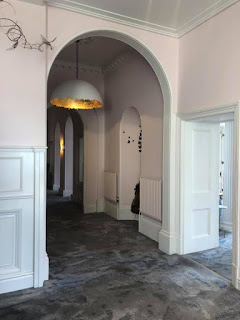 View from the lobby 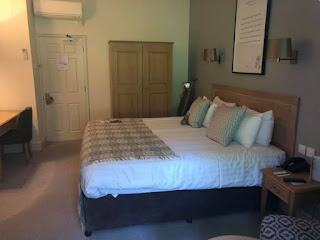 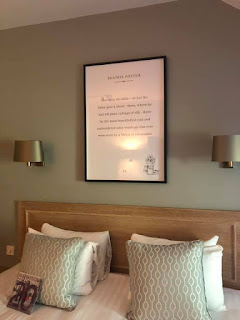 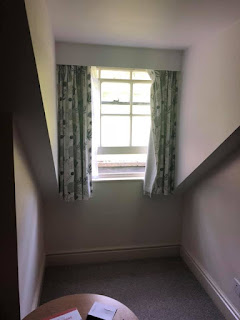 After our long drive from Bakewell and our quick trip into Gloucester we decided to call it an early day and head back to the hotel. Let's be honest- I wanted to sit in that bathtub until the water went cold, eat the Cadbury Roses we bought and  completely zone out. I absolutely love traveling and exploring new places but by the 13th day of a trip I just need to sit in one place, read a book and just be still. I wanted to enjoy as much of this lovely, peaceful place as I could before we had to check out and move along in the morning. 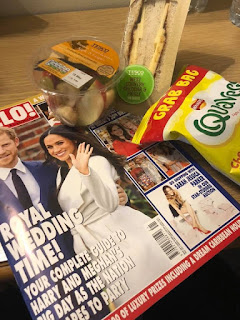 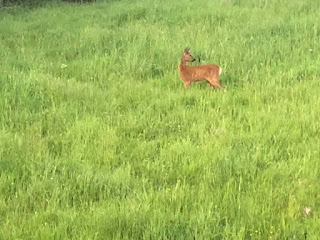 deer seen from our room

Our time in Gloucester was short, but we intended to make the most of it. The final days of an overseas trip are always tinged with sadness, and for me I'm always trying to desperately hold on to that vacation feeling. One more cathedral, one more castle, one more relaxed breakfast and exchange of foreign currency before airports and planes and the stress of real life returns.

So with a little bit of that "our vacation isn't ending" denial we hunkered down for our last leisurely breakfast.  We settled on our trusty J.D. Wetherspoons and picked a city centre location. The Regal was an old cinema or "picture palace" as they were called, built in 1939. J.D. Wetherspoons took over, creating the current restaurant in 1996. We sat at a table next to the windows in the back with a view of a multi-teared patio and lots of day drinking lads and their morning papers. I was surprised by the amount of people drinking a pint with their breakfast. Here it was 9am on a Friday morning and apparently a pint of lager goes well with your morning eggs. Adding to the surreal quality of morning drinkers were the large film props of the restaurant. Overhead were bi-planes hanging from the ceiling, across the landing was King Kong leaning on the Empire State Building and just next to us were life sized Oscar statues. I never thought I'd be saying that I ate my breakfast next to King Kong. 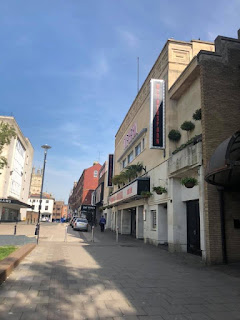 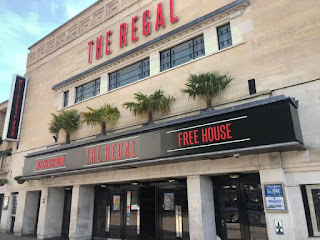 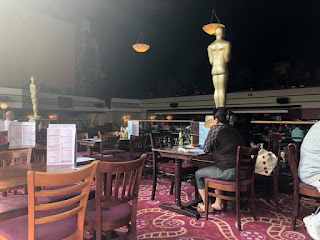 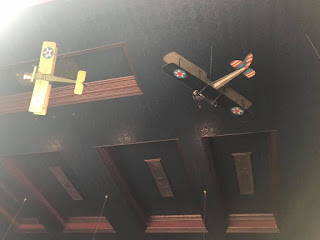 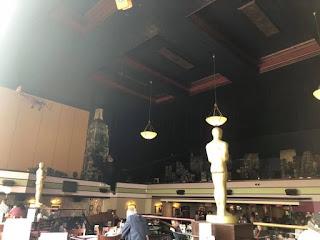 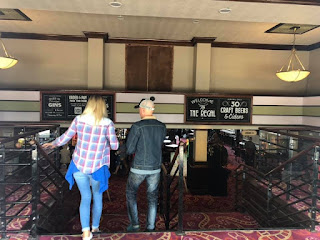 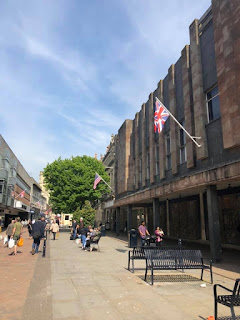 The British and American flags flying in honor of the Royal Wedding between Prince Harry and Meghan Markle.We saw this quite a few times on this trip.
We sought out the Cathedral after breakfast and found our way down the darling College Court street which honestly was more like an alleyway. I'm a sucker for a narrow street or alley with pennant bunting- want to lure me somewhere? Add pennant bunting draped overhead and I'll wander your way. It's a scientific fact. 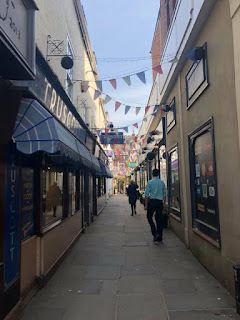 The very last little shop at the end just before it opens onto the College Green and the Cathedral grounds is the House of the Tailor of Gloucester. I knew I needed to go into that little door. The shop was tiny, the kind of place that you can't be anonymous in. Normally that gives me anxiety. Actually who am I kidding when I say "normally"? That gives me anxiety period. I don't like to walk into little stores and stick out like a sore thumb. I feel obligated to buy something, obligated to make small talk and just overall uncomfortable. But, I was in Gloucester gosh darn it and here was "the" Tailor of Gloucester shop, so I was goin' in! I'm so glad that I told myself to get over myself. 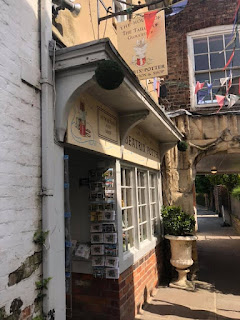 I walked in, the little bell on the door chimed and three older ladies were chatting around the till. I wandered the little shop and couldn't help eavesdropping on their conversation. In my defense they weren't trying to have a quiet conversation. They were talking about the imminent Royal wedding between Prince Harry and Meghan Markle that was taking the place the following day. One thing I noticed is that people seemed genuinely excited about the Royal wedding- well except for my father-in-law who displayed the cynicism I had been expecting, but otherwise people wanted to cheer the happy ocassion. The ladies were bent around the till discussing what they were going to be wearing to view the wedding, who was going to be joining them, and what they would be eating while crowded around the TV. Of course the talk turned to speculation of what Meghan's dress would look like, would Harry shave his beard, and who would walk her down the aisle. It made me so happy to hear that they were each having a wedding watching party, it felt like they were discussing the impending wedding of a family member. It was charming and heart warming. So much of our lives right now feels uncertain and negative so to have a happy ocassion to distract us all was welcome. I left the shop with my little spoon/tea bag rest and a smile on my face. 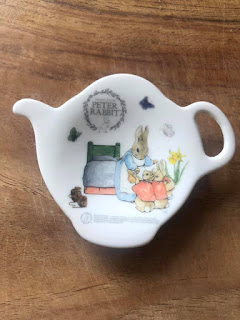 Gloucester was to be our last cathedral of the trip. In typical fashion I had failed to research it before we arrived. There is something to be said about allowing yourself to be surprised but I must admit when it comes to cathedrals that's not the best idea. You think I would have learned from my experience at Ely Cathedral on our previous trip (read HERE), but here I was standing outside Gloucester having no idea that it contained the alabaster effigy of Edward II or the crossed legged Irish bog oak effigy of Robert Curthose, eldest son of William the Conqueror. We found ourselves shoulder to shoulder with a group of students who arrived at the cathedral at the same time as us and were greeted by scaffolding and draped coverings. Gloucester Cathedral is currently under renovations so parts of the interior were off limits which in hindsight tells me this is why I never saw the grand medieval tomb of the 6th Plantagenet king. Somewhere beyond that drop cloth, Edward was quietly in repose and hidden from my view. 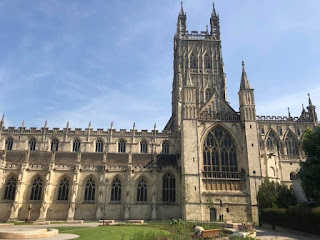 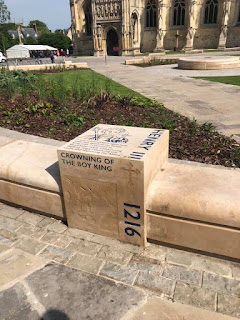 The great information blocks that surround the cathedral grounds 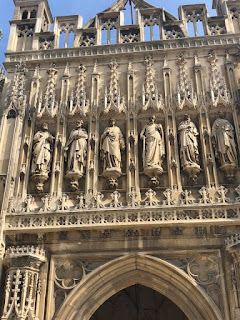 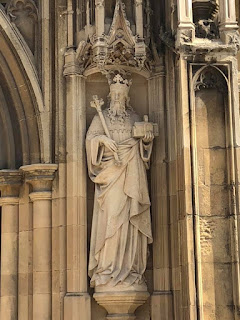 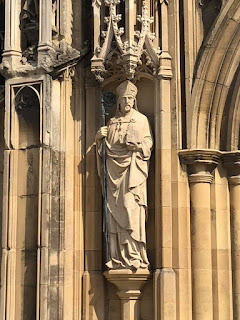 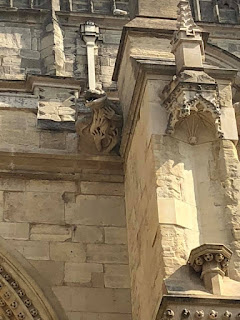 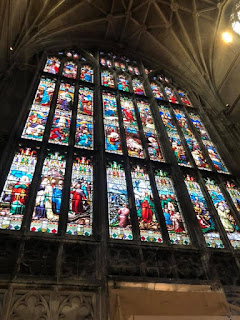 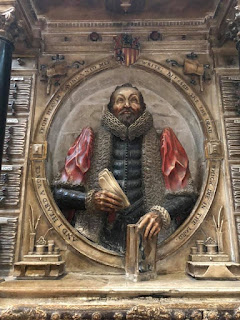 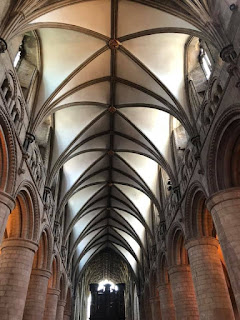 Romanesque ceiling in the nave

By this time it was getting time to get back on the road. We had another hotel in the countryside to find. We went in search of a Costa Coffee on our way back to the car and had our last little quiet moment on a bench in Gloucester. I said a silent farewell to the city. I don't know if we'll ever be back but it's left a good impression on me and I certainly wouldn't mind a return to the House of The Tailor of Gloucester for a figurine and one last overheard conversation.