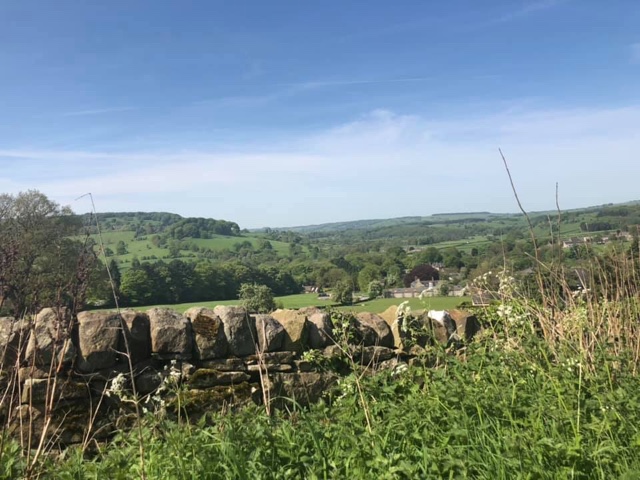 (Rowsley, Derbyshire on our way to Bakewell)

Listen, I have a sweet tooth. Most of the time I deny myself this craving but while on vacation anything goes. Having said that, it's completely normal for me to plan entire trips around food- and entire day trips around sweets. This my friends, if how we ended up in Bakewell, Derbyshire. We had driven through on a previous trip while on our way to Buxton, but didn't stop, so I was determined to stop this time. Bakewell is charming, like storybook charming and it knows it. Oh, and everyone else knows it too- this small market town is a tourist attraction and crowded! We knew this so we set out early to ensure there was available parking. Boy am I glad we did. The lot was probably a quarter of the way full when we arrived and was overflowing by the time we left.

Nestled in the valley of the River Wye, Bakewell meaning spring of Badeca, has it's roots in Anglo-Saxon times. Like most of Britain there is evidence of earlier settlements but the lasting settlement that we see traces of today began around 920 when the parish church was built. The present church was constructed in the 12th and 13th century at which time Bakewell was called Badequelle. Mentioned in the Domesday Book, Bakewell had an established market and was developed as a trading center by the 13th century. 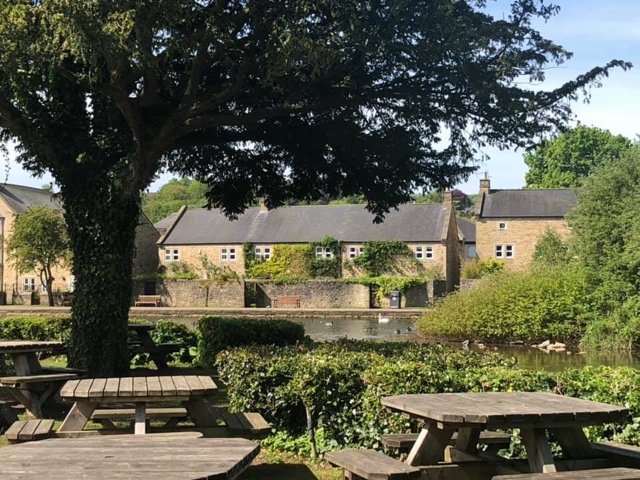 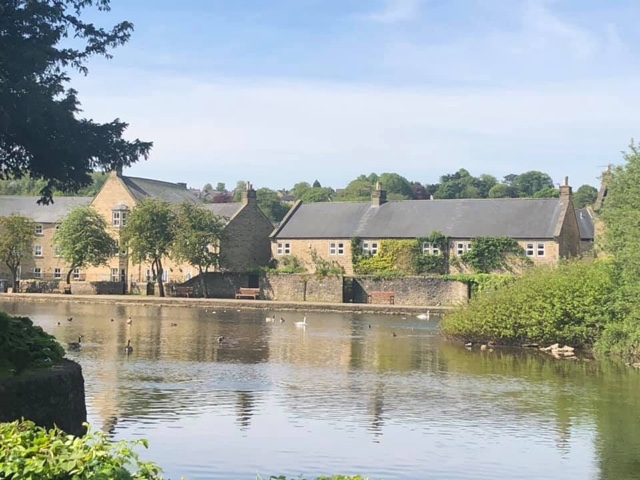 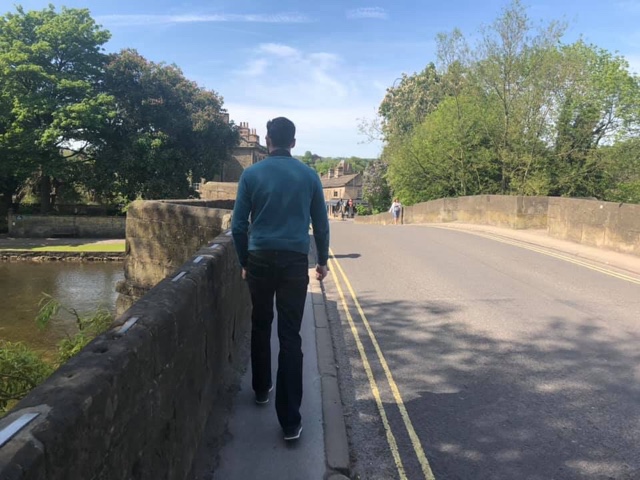 We arrived just before 11am and walked along the River Wye. Such a picturesque scene, strolling across the 13th century 5 arched bridge, the sun shining brightly on the crisp morning. We wandered through the narrow pedestrian-only areas in search of lunch. I'd been wanting a pasty and hadn't had one yet on this trip. When we were visiting my in-laws in 2016 I feel like we had a Cornish pasty every day. For the uninitiated a pasty is a savory hand pie, think an Italian calzone crossed with a chicken pot pie. Traditionally filled with beef, potato, onion and turnips, I prefer mashed potato, cheese and onion. Nothing beats a freshly baked, piping hot pasty! We arrived at Proper Pasty Co. just as they were opening their doors for business. We took our fresh pasties back to the banks of the River Wye and plopped ourselves on a bench, eating lunch with the ducks. It was a scene out of a movie. 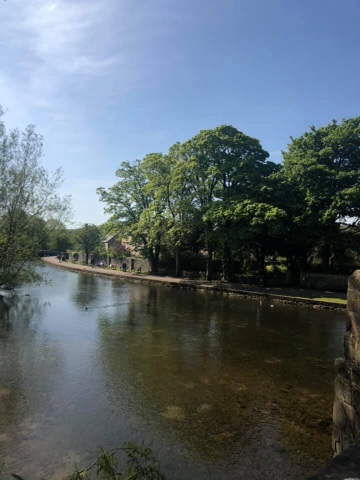 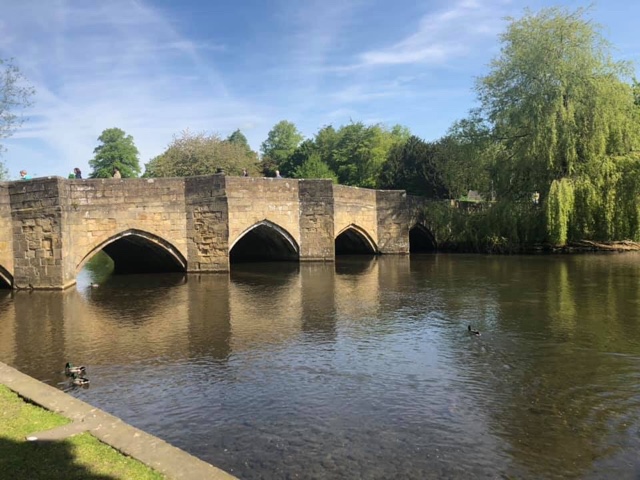 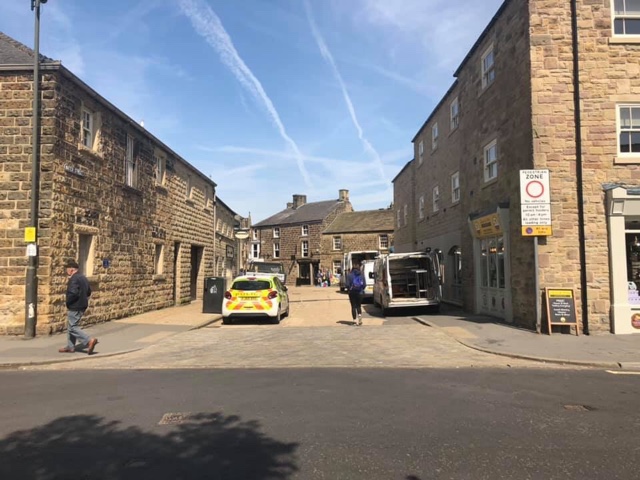 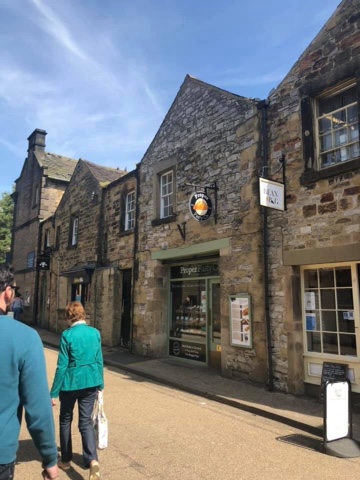 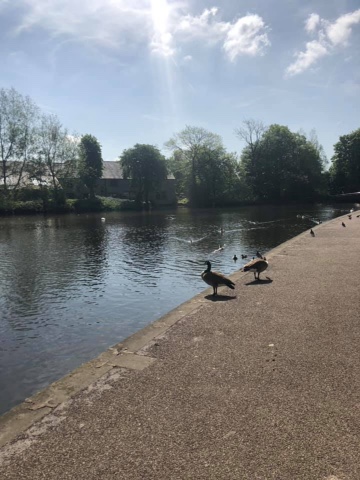 Our view eating lunch. Not too shabby 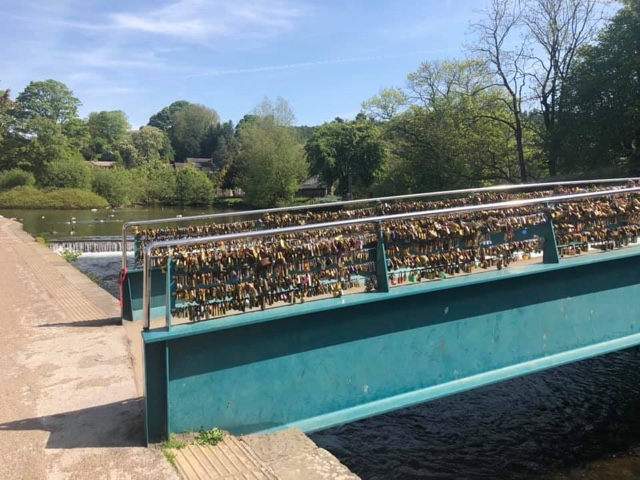 Weir Bridge also called the Bakewell Love Lock Bridge. The love locks started to appear on the bridge in 2012. 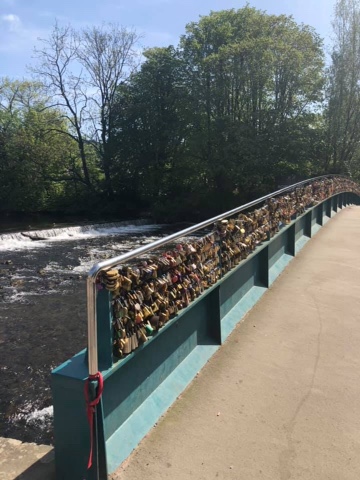 Besides being an incredibly picturesque place Bakewell is known for a pastry called the Bakewell Tart, which I've also been known to confuse with a Bakewell Pudding. The Bakewell Tart is a variation of the Pudding which adds frangipane and in the case of the cherry Bakewell we had, a layer of almond flavored fondant and half a glacé cherry. It was delicious and I'm sad that we shared one tiny tart. This tart was the main reason we were an hour out of our way and negotiating parking and crowded streets in the morning when we could have been hanging out with my in-laws in our comfy clothes. 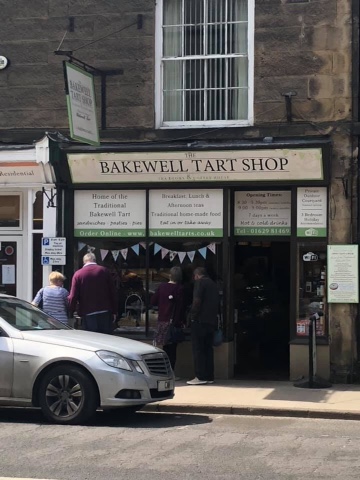 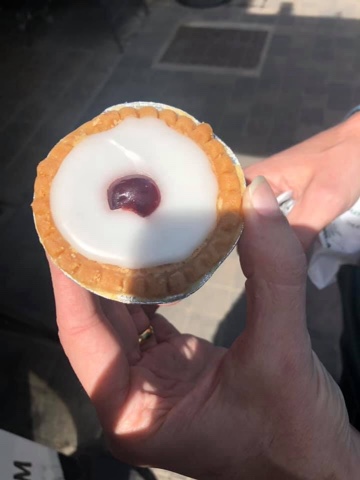 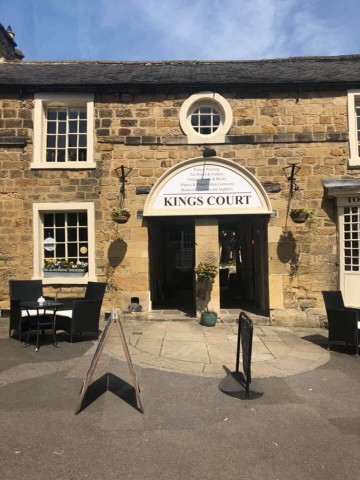 We wandered the town center and took back streets up hills, passing beautiful stone houses. The buildings in the town of Bakewell are mostly made of White Peak limestone (specifically Eyam and Monsal Dale limestone) and some sandstone quarried locally.  It makes for a very uniform and pleasant looking town. Although cookie cutter it doesn't resemble a development or planned community- it has character, personality, and charm in spades. 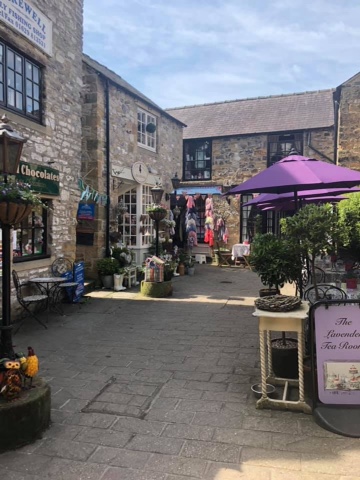 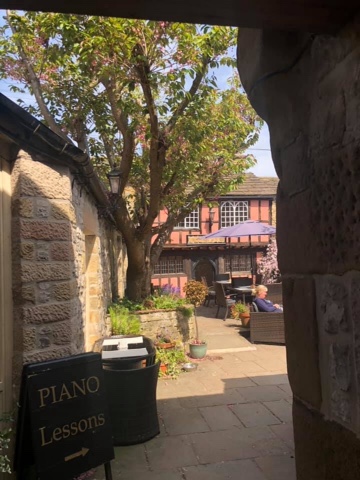 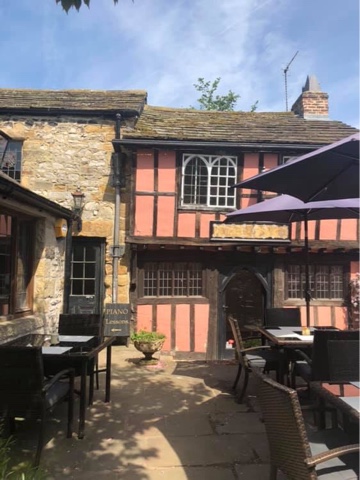 (Dating back to 1602 this charming Grade II listed pink house inside King's Court currently sits empty. There had been a plant shop in it when I first researched so I was really hoping it was still there and I could go inside but alas no shop.)

The other reason we were in Bakewell and the Peak District that morning was because of Daniel's family connection to the area. Being an amateur geneologist in my spare time, I'm a wee bit obsessed with finding those familial connections. Daniel doesn't care one bit and I think he gets perplexed when I make such a big deal of going places either one of our ancestors are connected to, but especially when it's his family. I geek out my friends. I basically begged Daniel to detour to Chapel-en-le-Frith because that is where the majority of his paternal grandmother's family lived and died. I'd been researching for so long that these place names are as familiar to me as where I live. I had forgotten to screenshot directions to the parish church where his ancestors are buried so we went on a bit of a wild goose chase that ended unsuccessfully. Let me just say this, Chapel-en-le-Frith is a bustling town with bumper to bumper traffic in the town center. There was no lollygagging or being a looky-loo without getting a curt peep from the car behind you. In typical Leah and Daniel fashion we spread our time thin and had to abandon the search for the parish church in favor of reaching our final destination 3 hours away in a timely manner. We're always ones to pack as much as possible into one day, which means we've always got one eye on our watches. 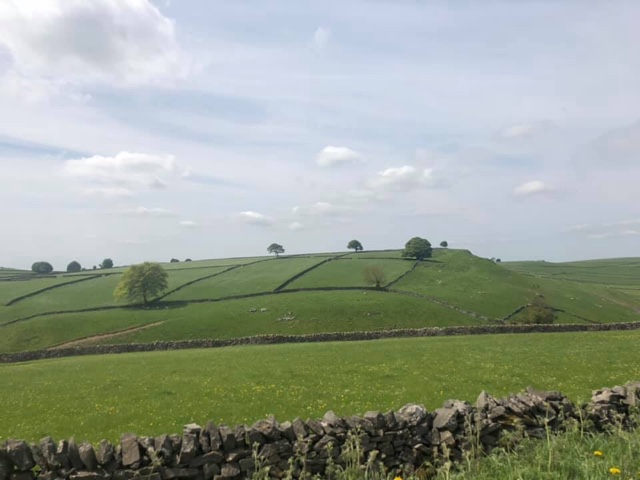 On our way to Chapel-en-le-Frith. Beautiful Derbyshire countryside. 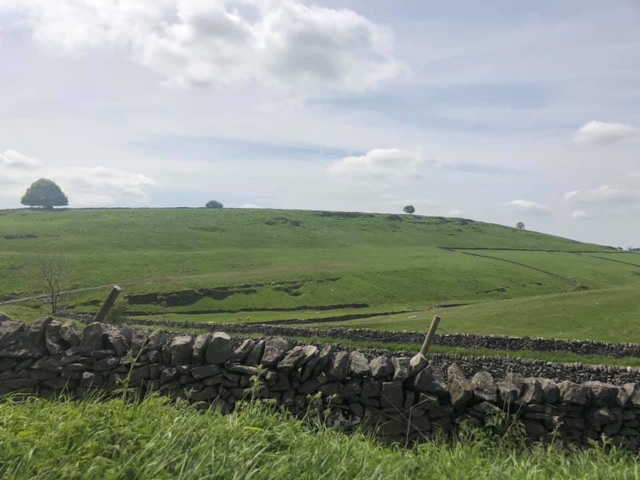 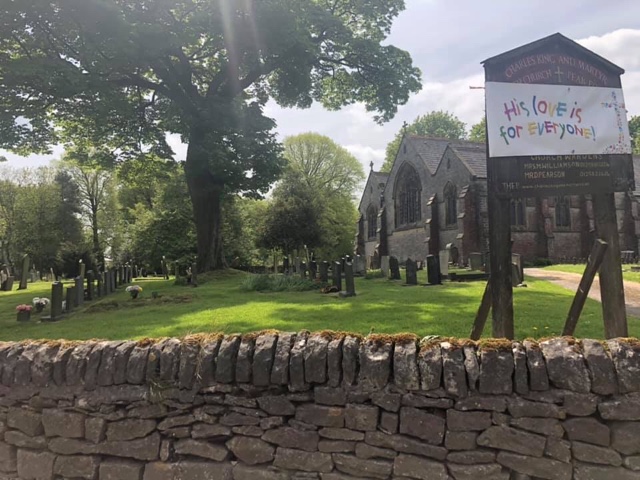 Pretty soon we left the countryside and the Peak District behind for motorways, motorway services and all the coffee and vending machine snacks we could grab with two hands. Quaint stone villages and rocky peaks were now just a memory. Goodbye Derbyshire, until we meet again...