11. The Duchess and a Gang of Ducks 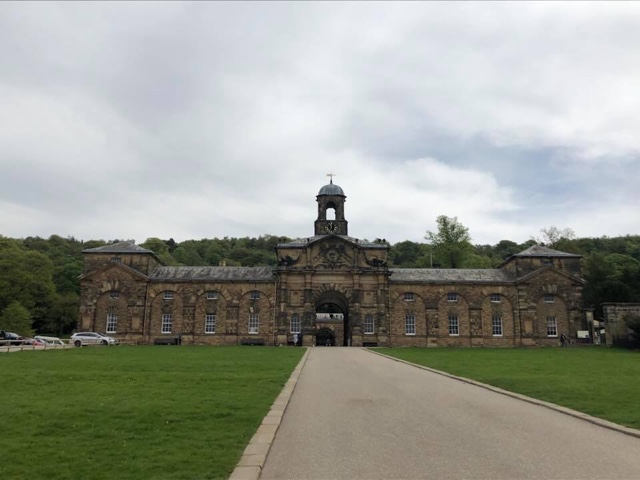 These are the stables... I repeat... These are the stables, people!!
Chatsworth is the kind of place that doesn't seem real, and if you're from California then you've only seen it in movies. It's a lot to take in when you first see it. The extensive grounds and the English Baroque house that just seems to go on forever are right out of a Jane Austen film. Just imagine the Lord of the Manor falling in love with the tenant farmer's daughter after he happens upon her on a country lane. Maybe his horse spooks her and she falls? Maybe it starts to suddenly rain and he has to bustle her off before she catches a cold? And then love blossoms... Like seriously, that was going through my mind as we drove the windy lanes of the Derbyshire Dales to the estate. The movie would star 90's Kate Winslet in a precious Regency bonnet. Oh wait, that's basically Sense and Sensiblilty.
The grand house we see today is not the original structure, in fact very little remains of the Elizabethan manor that was built by Bess of Hardwick in the 1560's. What we see today is the result of rebuilding by the 1st Duke of Devonshire, William Cavendish in the 1690's and again in the 19th century by the 6th Duke also called William Cavendish. The most famous occupant of the house was Lady Georgiana Cavendish, Duchess of Devonshire- formerly Lady Georgiana Spencer the great x's 3 grand Aunt of Diana, Princess of Wales. (There's a great film about her starring Keira Knightly that was filmed at Chatsworth House.) Her scandalous life caused quite the uproar in her day. Married at the age of 17 to the 25 year old 5th Duke of Devonshire (you guessed it another William Cavendish!), their loveless and unhappy marriage contributed to the unusual arrangement of Georgiana's best friend, Lady Elizabeth Foster coming to live with the couple and openly becoming William's mistress. After finally producing a male heir after having 2 daughters, Georgina was free to (quietly) take a lover, Charles Grey. She became pregnant by him and was whisked off to France to give birth to the child in exile. This child, a daughter named Eliza Courtney, had to be given up to the Grey family but later in life Georgiana was permitted to visit her daughter.  In order to return to England and be reunited with her 3 children by William who she was devoted to, Georgiana was forced to renounce her lover. Hm, I spy a wee bit of hypocrisy here- anyone else notice that William got to live openly with his mistress (and have children with her), but Georgiana had to be exiled to another country? No comment from the peanut gallery over here, but I'm sure you can guess how I feel about that nonsense! 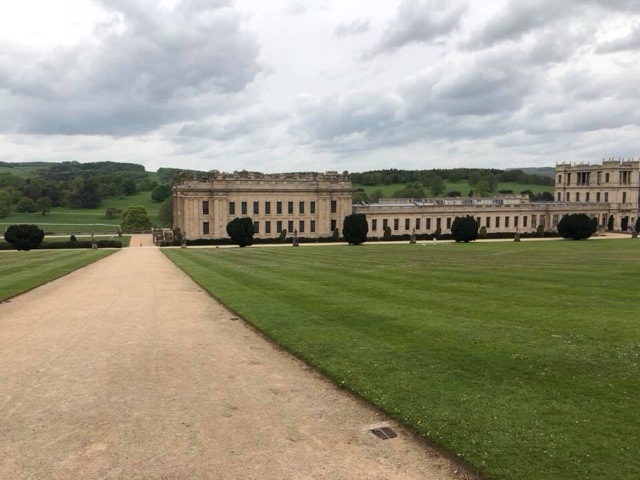 It's so big I couldn't get it all in the shot 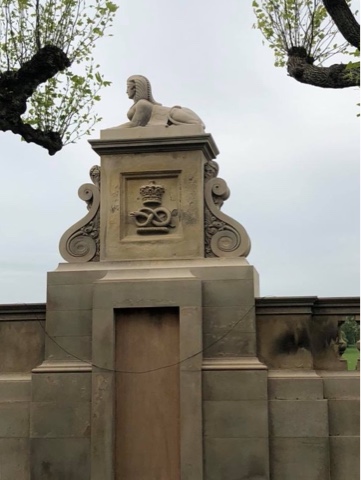 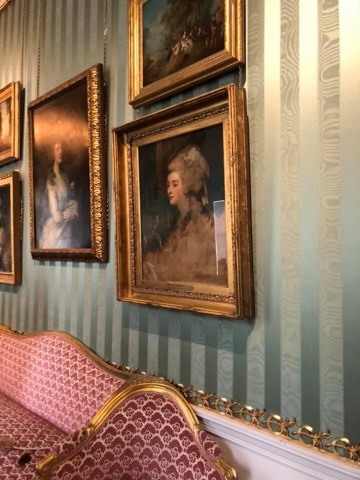 Two portraits of Georgiana, Duchess of Devonshire
The Duchess was heavily involved in politics which was unusual in those days. She often hosted dinner parties that would end in passionate political debate. These parties would also include entertainment in the form of gambling. Georgiana would develop a ruinous gambling addiction and would over her lifetime incur vast amounts of debt. She tried to keep her debts a secret from her husband (one of the wealthiest men in all of England), by borrowing money from the Prince of Wales, her parents and an affluent banker friend Thomas Coutts. By the end of her life she had amassed the equivalent of $4.8 million (£3.7 million) in debt. When her husband found out the extent of the debt it was clear that he wasn't completely in the dark about her gambling habit- he was said to have remarked, "Is that all?"
By the time of her death from a liver abscess in 1806 at the age of 48, Georgiana and William had softened toward each other and a real affection had blossomed. William showed genuine grief at his wife's passing. All of this was going through my mind as we wandered the halls and staircases of Chatsworth. I was really hoping to see the well known portrait of Georgiana as Diana, Goddess of the Moon by Maria Cosway. I had seen it in a book in my early 20's and was keen to see it in person. Before we got the hall that contained the portrait we walked through most of the house. It is so large and grand that you could get lost in it. We walked through the Painted Hall with beautifully painted ceilings, past the gorgeous 17th century indoor fountain, into the chapel corridor where the 1st century colossal foot of a giant Acrolithic goddess resides next to an Egyptian granite statue of Sekhmet from the 18th dynasty. It makes your head spin in a good way. 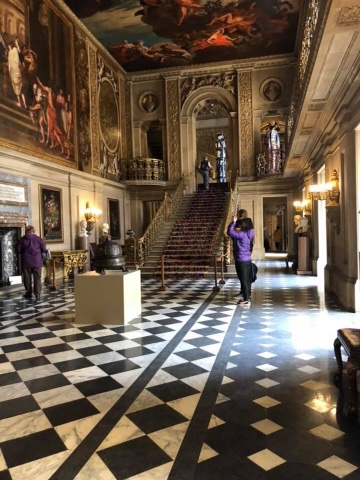 The Painted Hall as seen from two directions 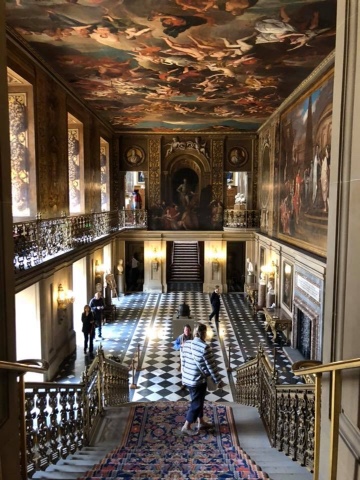 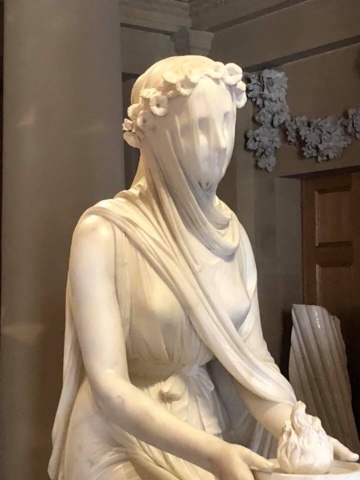 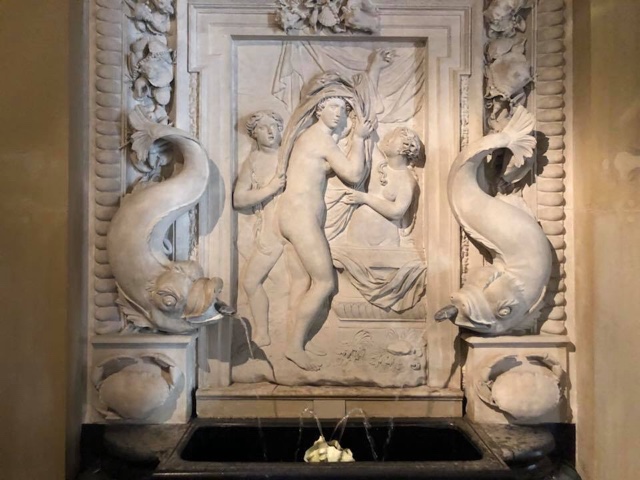 Diana in her Bath fountain in the Grotto room 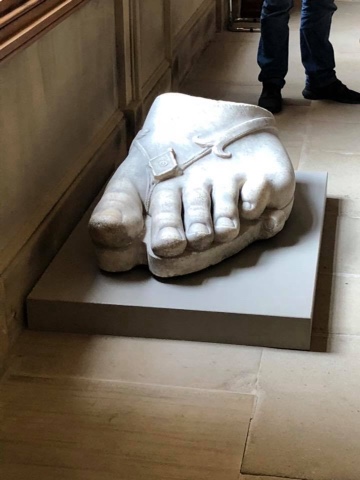 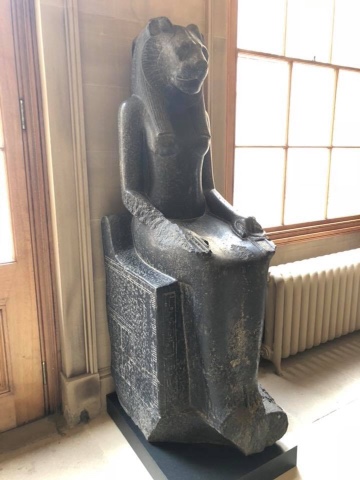 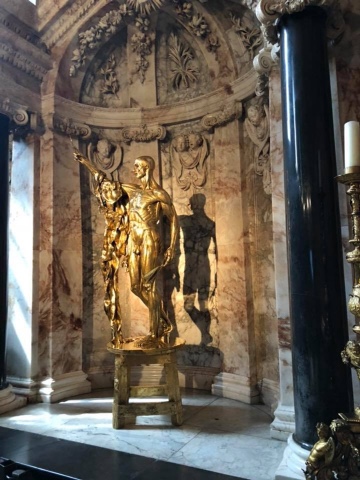 Statue of St Bartholomew by Damien Hirst in the Chapel
We finally found our way to the sketch galleries where the portraits of Georgiana hang. I tried to get good photos of them, but the room was crowded and it was impossible to stand back far enough to get the photos without people walking in front of them. I was just pleased to be able to stand close to them, to see the brush strokes and try to get a feel for the woman who was so famous in her day. 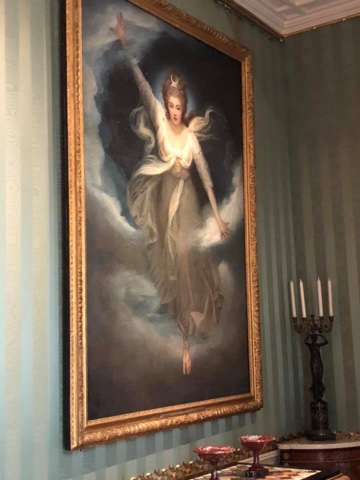 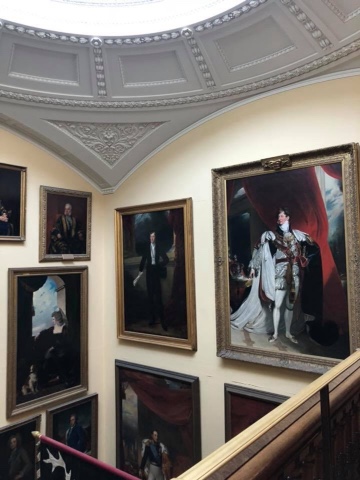 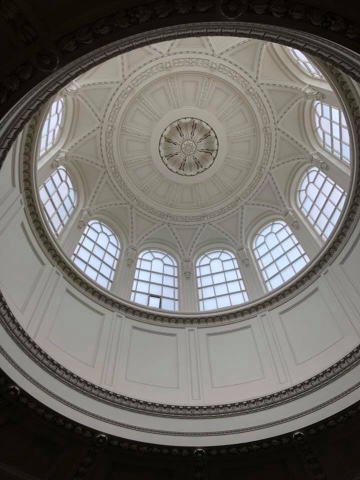 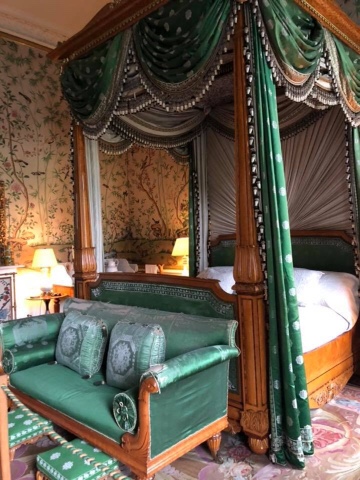 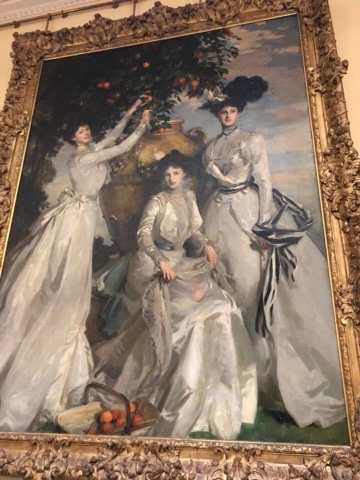 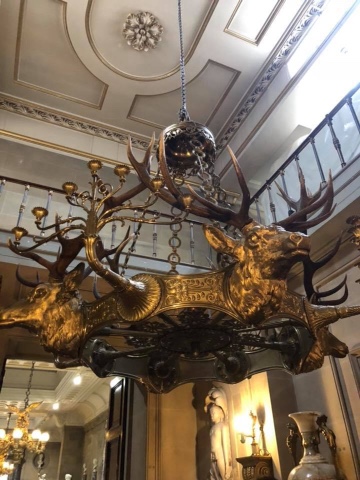 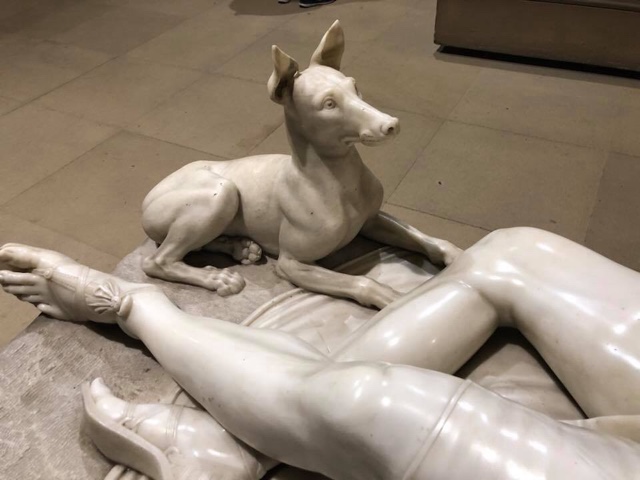 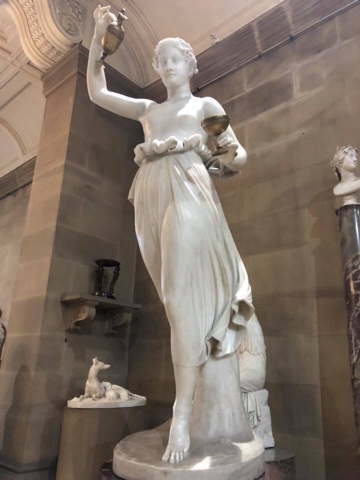 We decided when we left the grand house to get an ice cream at the little cafe outside the gift shop. We sat down and immediately noticed the ducks running all over the patio area.Threy're very tame and clearly are used to being fed by the tourists. Those little suckers were getting right up in people's feet, quacking and begging for bits of food. One mallard in particular was incessantly quacking and really letting people have it if they didn't acquiesce. Eventually they waddled over to our table. I thought we were going to be exempt from their badgering but they saw our ice cream and left the table of Asian tourists with sandwiches. Clearly they were ducks after my own heart and knew a good treat when they saw one. I had no intention of parting with my Magnum White bar, but Daniel is far more generous with his food (he has a healthy relationship with food, whilst I do not lol- I do not share my ice cream!), he dropped a few pieces of ice cream cone for the little gang of waterfowl. I think England has underground gangs of ducks who subtly intimidate the populace and have gained control without people even knowing it. They got the food they wanted from the tourists that day at Chatsworth and a few days later we were herded by an even larger gang of ducks who forced us to do their bidding and basically made us dance to their tune. I bet they all get together and gossip about their little terror network and have a good quack about the control they have over the ignorant masses. Little winged dictators, that's what they are! 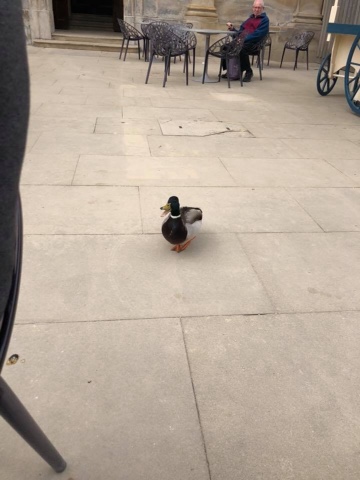 There's a video of this chatty ringleader on my Instagram: @cheerupoldbean 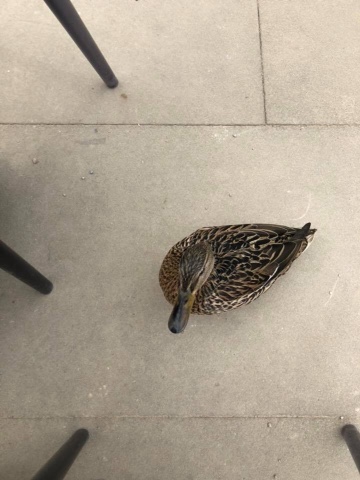 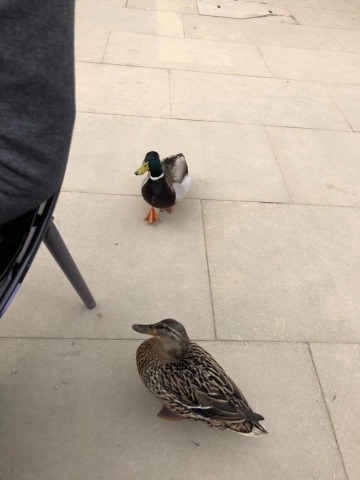 I was eager to get away from the duck horde because honestly I couldn't remember if ducks pecked and well, I value my ankles. We finished our ice creams while walking up to the glorious cascade waterfall. You can see the waterfall from many of the room in the house, I was eager to get out to it and hear the water flowing over the terraced stone steps. When you live a place that is plagued by drought flowing water is a rare occurrence- it's a real treat to hear moving water.
Designed by the French hydraulics engineer, Grillet,  the Cascade was completed in 1696. The present Cascade was the result of an enlargement done just 6 years after the original fountain's completion. It was in this remodeling that the Cascade House was added at the top for increased dramatic effect. The water that flows down the steps continues on to another fountain before it finds it's way to the River Derwent through pipes. To my knowledge this fountain hasn't been touched since 1712 (except for maintenance I'm sure). 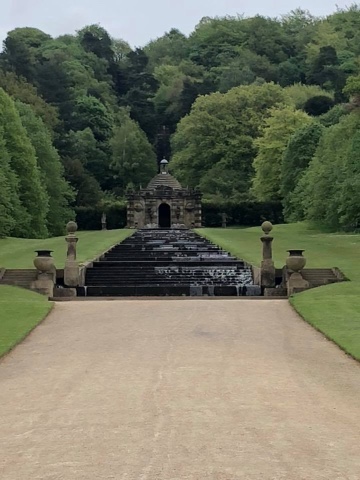 I have a great video of the Cascade in action on my instagram: @cheerupoldbean 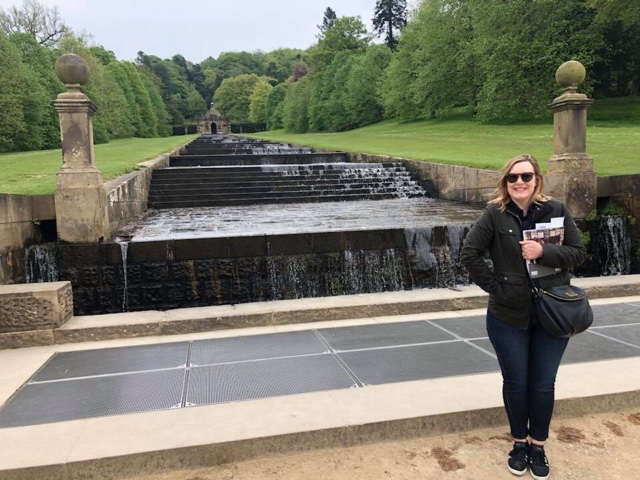 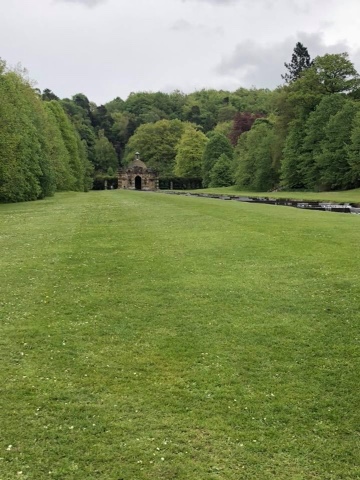 The grounds of Chatsworth are just enchanting. There are many gardens and hidden spaces to explore. I was still nursing a broken toe (if you haven't read my previous posts, I broke the little toe on my right foot about a week and a half before our trip. I limped and hobbled most of our time in England), so walking miles around Chatswoth's estate was out of the question. I was happy to have experienced what we were able to- it was a good day, seeing beautiful things and dreaming of love stories and 18th century scandals. 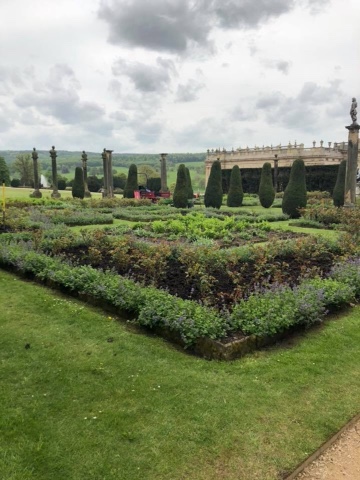