Time to head back to our beloved England, my husband's home country and my home away from home. The flight this time was a bit boring considering I didn't have an encounter with Angelina Jolie (Have no idea what I'm talking about? Search Angelina Jolie on the blog and find out), but it wasn't without it's mini dramas. A misplaced green card, a flight delay of 90 minutes, my husband tripping the security machines every.single.time for no reason, space invaders and Italians.  Oh, and a broken toe. I limped my way through England and probably did permanent damage, but it was OH SO WORTH IT!
My sister kindly dropped us off for our morning flight (after the frantic tearing apart of our house to find Daniel's green card- I think I aged 10 years in that 15 minutes) and just as she was pulling up to the terminal I get a nice "ping" from United letting us know our flight was delayed by 90 minutes! I don't handle change or upsets well so needless to say this set off my already bubbling anxiety. I had to eat all of the carbs once we went through security to bring me back down to earth. Let's talk about security for a moment. Our local airport is a small one- although they have built a brand new terminal so it's not as small as it once was- and the TSA security area is like a mini LAX, total overkill! Let me tell you, those people take their job seriously. The amount of times that I heard (in a super brusque voice), "Ma'am, take off your sweater.", "Ma'am you need to take off your shoes.", "Ma'am, your watch needs to be in a separate tub.", "Ma'am.....", "Ma'am......". Seriously, I so badly wanted to say to the woman, "We're in Smallville, USA we see each other at the grocery store- you don't have to be like that." That was the first of what would become every time that Daniel would set off the security machine- he had to be frisked every time. I got used to waiting. Poor man, there was absolutely no reason he was setting the machine off. 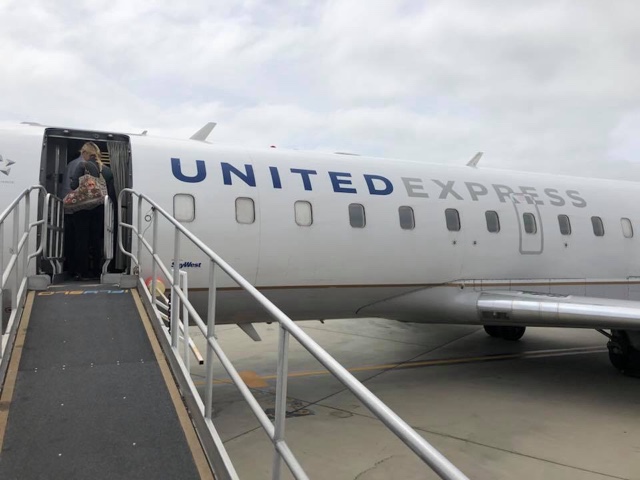 Who's ready to talk Italians? So, is it a stereotype if it's true? Like, I really wonder this? I've been to Italy- I've seen things, I've witnessed the swagger. It got real nice, up close and personal with me. We were in an endless queue for the bag drop at LAX, after me hobbling quite slowly from Terminal 7 to Tom Bradely International (yes, there's a shuttle service, but honestly it was faster for me to limp along and walk then wait for the bus to stop at each terminal). The line was barely moving and I'm watching the clock on the wall tick knowing we still had to get through security, yet again. A group of about 6 Italian men who appeared to be in their early 20's, came sidling up to me- like really, a cheeky stealth move to try to use their Italian charm to cut in line in front of me.   The ringleader was an attractive man in yellow tracksuit pants who knew exactly how handsome he was. I'm not the kind of girl to fall for a sheepish grin, especially when that sheepish grin is trying to cut in front of me in a long ass line. Sorry buddy, take your wink elsewhere.They took the hint and fell in line behind us, which still meant that they cut in front of all of the people behind us. For the next 20-30 minutes we were in shoulder rubbing distance of them and listened as they had a very animated conversation in their native tongue, with hand gestures and all. When it came time to head to the counter and drop our bags, "Yellow Tracksuit Man" also walked up to the available counter next to us. I eavesdropped on one of the funniest exchanges I've heard in a while. It goes like this, and please remember to hear "Yellow Tracksuit Man's" voice in heavily accented English.
The entire group tried to walk up with him and the woman behind the counter said, "One at a time please."
Yellow pants man, "But we're together.", said with a big cheesy grin, meant to win her over.
Woman behind counter, "Oh no, you're not going to work me over today!" At which point both she and I started laughing and we shared a knowing look like an imaginary fist bump. It absolutely made my day!
The line wasn't long for security this time but once again Daniel was pulled aside and frisked. He also left his sunglasses in the tray, which we wouldn't discover for another 10 hours. By this point we were starving and thirsty. We wanted pizza and a big bottle of water. We decided to divide and conquer- Daniel took off to get the water and I stood in line to order our pizzas. Nothing in airports is quick, it's also one of those places where you just become a filer of space, it's amazing how the people that work at large airports just look right through you- but I digress. Once again I'm watching the clock tick and feeling the time before we are due to board just slip away. But, what's this? Do I hear the lively voice of "Yellow Tracksuit Man"? Can this be real? Sure enough, there were the Italians again trying to cut in line a few people ahead of me. I just chuckled cuz it didn't work in the pizza line either. 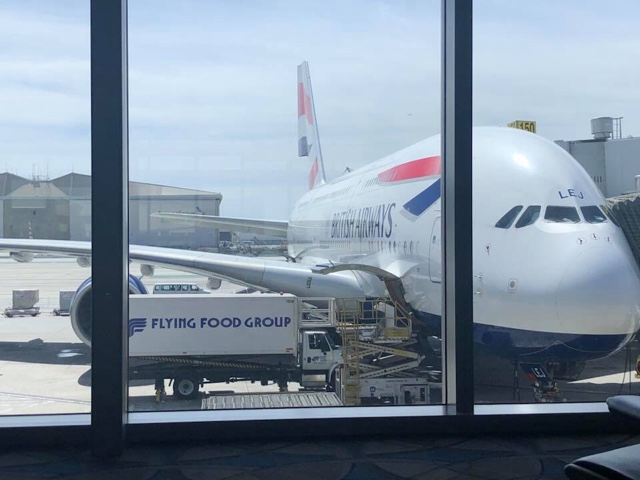 We got to our gate with only 20 minutes to kill before boarding. We were in group 5 which basically means we're the peons who board dead last so we sat ourselves down in a row of empty seats at our gate. As I mentioned previously, I broke my toe about a week and a half before we flew out. It was one of those stupid accidents that was completely avoidable and had the potential to ruin our whole vacation. I had on a pair of comfortable slip on shoes and the offensive toe was taped to it's next door neighbor. At this point that little toe was throbbing from all of my hobbling around so I was eager to elevate it and relieve the pressure. Just as I was about to swing my leg up on the empty seat next to me, a couple sat down RIGHT next to us and sat in that seat! I couldn't believe it. The entire row was empty and yet they chose to sit right next to us. It was a reminder that I was going to spend the next two weeks in a place that doesn't have the same personal space requirements that Americans have. 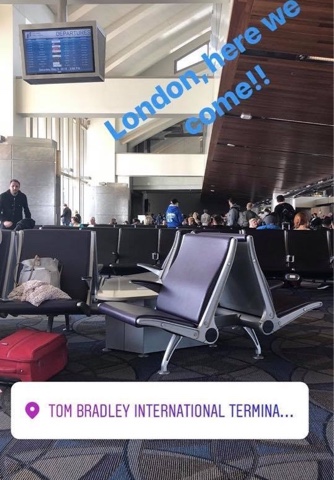 We fly with British Airways when we head across the pond. I've flown with Virgin Atlantic too and they're amazing, but we realized that if we're going to build up our frequent flyer points we needed to stay with one airline and just start racking them up!  In our experience they really do have good customer service and the ease of flying with them when we go to Heathrow is great. British Airways has their own terminal at Heathrow so once you get yourself to Terminal 5 you know you're in the right place and you just have to get to your gate. They have their own car rental offices with Avis and Budget in the terminal as well so you don't have to travel to the main terminal for your car rental.
Also I'm not going to lie, another reason we fly with them is even in bottom of the rung economy you get a small bottle (two glasses worth!) of wine if you are having lunch or dinner on the flight. I'm easy to please, what can I say? 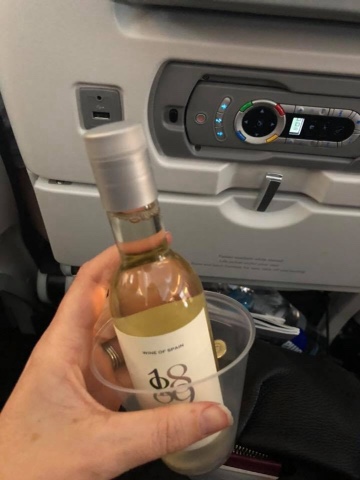 We got settled into our seats, and I came to a silent agreement with the stranger next to me about who got the armrest- he won- but I made the most of every inch of my allotted foot space and did my very best to elevate my injured toe on my backpack. We chose seats in the very rear section of the plane for the sole reason that they're closest to 3 bathrooms (and you can see everyone coming so you can pick the best time to go to said bathroom and not wait in line), and a large empty area which you can do stretches in. Guess who else thought it was a good idea to be in the last section? The Italians!  At this point they had found a soft spot with us, they were our flight mascots- it was too bad Yellow Tracksuit Man was't sitting next to me cuz I really wanted his life story after all of our encounters.
I managed to get a few hours of sleep which is kind of a miracle, although I did have the help of Good Day Chocolate Calm Supplement, which contains magnesium, L-theanine and chamomile. I've found that 6 is the perfect dose to get me drowsy, and bonus points: They taste just like M&Ms. I'm going to keep them on hand from now on since my anxiety flairs up quite often. 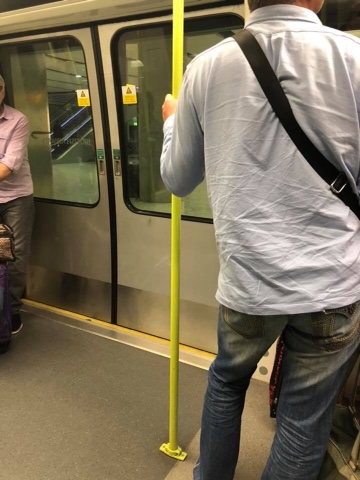 Flying in and out of Terminal 5 means you usually have to use an internal train to get from your gate to baggage claim and customs. It's a quick little ride and I find it clears the cobwebs of the long flight since you have to stand up and keep your balance.
We said a silent goodbye to the Italians at baggage claim and I pondered the fact that we'd had this shared experience over the last 14 hours from bag drop off in Los Angeles to baggage claim in London with these strangers who we'd never see again. Like, where is Yellow Tracksuit Man now? Which line is he trying to cut into, and is his boyish charm working? You know what? I bet it is.

We picked up our rental car* (a brand new VW Golf with barely 2,000 miles on it! It still had the brand new car smell!!) and set off towards our first vacation destination. I will say this ahead of all of my upcoming posts- we had the most glorious weather on this trip. The first few days felt like we'd never left California. Thank goodness I'd thought to pack a few t-shirts last minute and yes, I did come home with a tan! 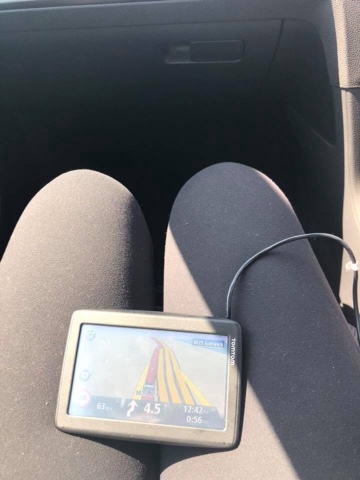 Yes we still use an old school Tom Tom, saves the data on our phones! 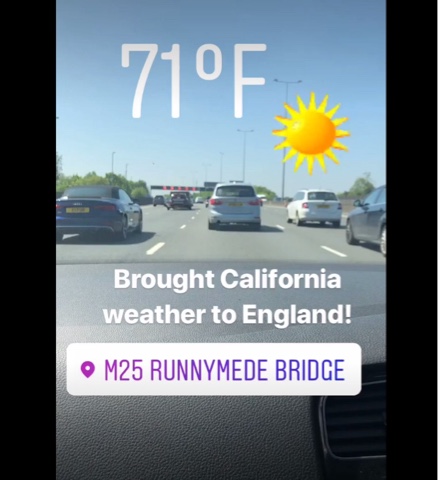 *a travel tip if you're renting a car in England. Between hotels asking for your license plate number and parking lots requiring it to purchase pay and display tickets, it's a good idea to take a photo of your rental car's license plate. It's easy to call up and means you don't have to memorize it or send someone out to get it while checking in. 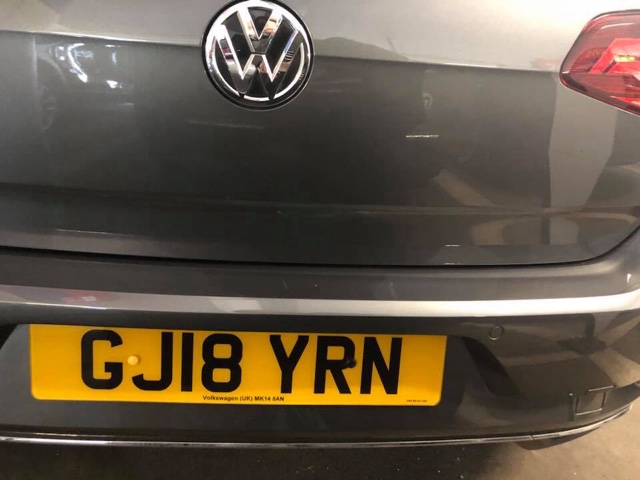 Of course I have it memorized now...
Labels: england Heathrow London UK vacation