Playing Tourist in Our Own Backyard

Something I learned by accident when we vacationed in Kauai a few years ago is that I have a fear of the deep ocean. We toyed with the idea of deep sea snorkeling, and then I had an anxiety attack. Nix the snorkeling. So, when Daniel started talking about getting a kayak a few months ago I just kind of brushed it off and hoped he'd forget about it. Deep down I knew that was unlikely though, Daniel was in the merchant navy for a few years just before we met and has a love of the open ocean. He often talks about sailing and gets a far away look in his eyes, I just nervously laugh and go in for a distraction.

I knew I couldn't dodge the bullet for long. Today was the day for my very first kayaking adventure. I like to call myself the Reluctant Adventurer. I really want to be an adventurer and do cool things, but I also have so much anxiety surrounding the unknown that I often skip opportunities. But, I made a pact with myself years ago that I won't let my fears win every time, otherwise I'll just live in my closet upstairs. With that pact in mind I took some deep breaths and told my stomach ache to go away and signed the waiver form.

Morro Bay has quite a few rental options right on the Embarcadero, you have your pick of places and launch locations. We decided to go with Sub Sea Tours and Kayaks. They've been there forever and had a great price ($25 for a 2 man kayak for the first hour- $10 for every hour after). We chose to rent a two man kayak because I knew that doing it completely on my own was out of the question. 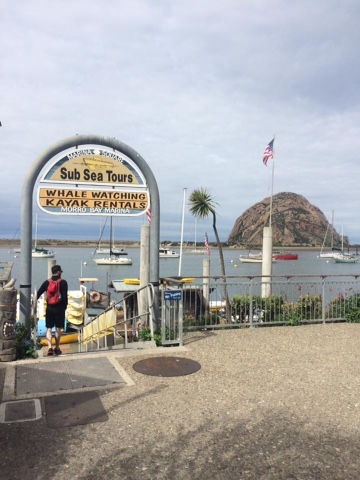 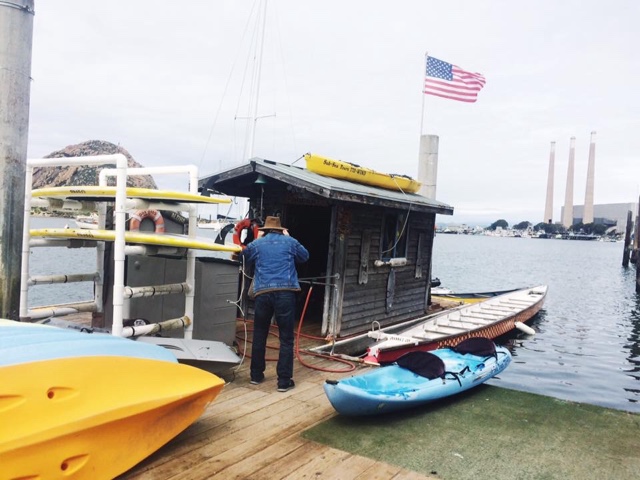 I really wish I'd gotten the man's name who helped us, he was super friendly and definitely said all the right things to these first time kayakers, giving us advice and advising us on where to go. It really helps that they get you set up and help you get in and out of the kayak; in part because we needed it being newbies and also because I couldn't outwardly panic in front of a stranger. Cool as a cucumber, me.

Off we went across the harbor making our way to the sandspit that runs the length of the harbor meeting land in Montana de Oro. I held it together and even started to enjoy myself- until Daniel adjusted his position behind me rocking the kayak. I'm pretty sure I shouted, "What are you doing?!", I'm equally sure that he just ignored me.

We passed seals, which I didn't get any photos of because my phone at that point was safely packed away in my backpack and I was too afraid to move to get it out. I honestly didn't even look at them because I was concentrating so hard on paddling and dodging the moored boats. Also they told us that we had to stay 100 feet away from them and at this point we weren't cuz I can't steer worth a damn- my inner child was afraid the yard duty would blow a whistle and put us in time out. 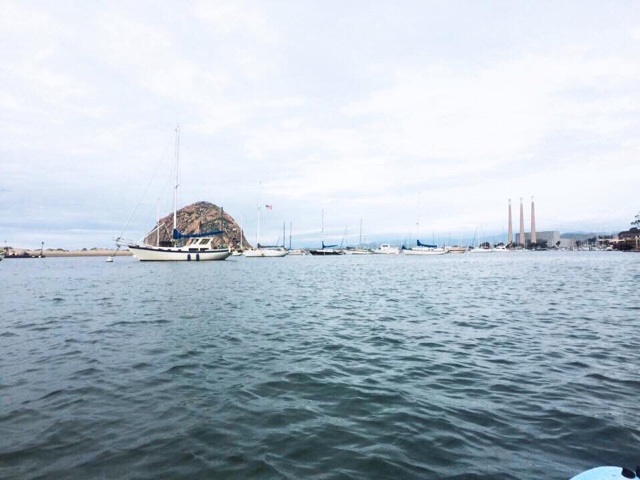 We finally hit sand and jumped out at the sandspit, pulling the kayak up on the beach. The sand out on the sandspit was something else- I've never experienced sand like that which is saying a lot as I've spent my whole life near beaches and walked on a lot of sand. It was deep, soft, fluffy and warm on our bare feet. I actually took a photo as I couldn't believe how far my feet were sinking. It felt like walking in snow. There are beautiful views out on the sandspit. I was a bit disappointed as the majority of the sandspit is closed off because it's a snowy plover habitat, which I respect but I had visions of walking to the other side and having views of the open ocean beyond. 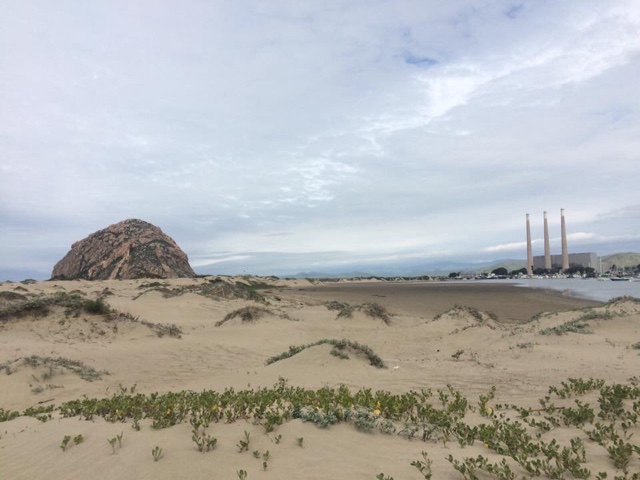 View of Morro Rock from the sandspit 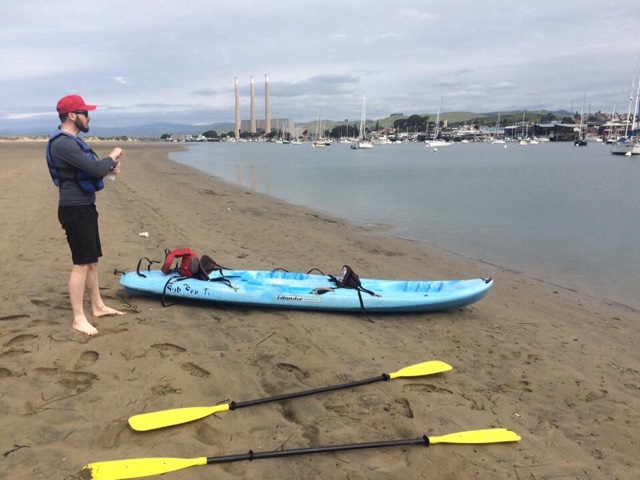 On the sandspit looking back to Morro Bay 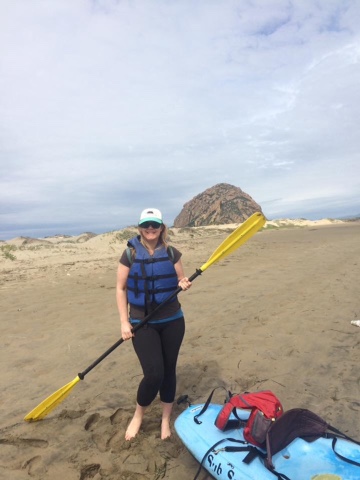 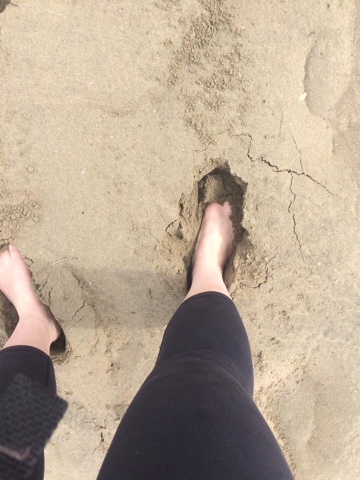 That sand was above my ankle, lovely and fluffy 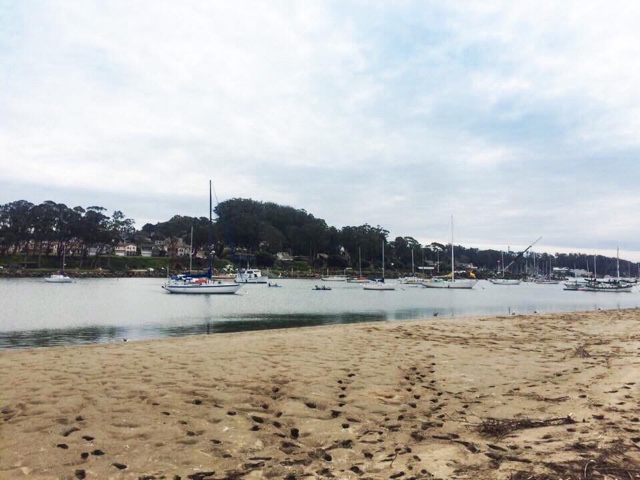 Let me tell you a few things that I learned as we made our way back out into the harbor and towards the back bay. The upper body strength I've gained from doing hair 5 days a week makes me a strong paddler (yay!) but this also makes me zig zag instead of going in a straight line (oops!). Poor Daniel is now sitting at our table putting bandaids on the blisters that my paddling caused, as his job was to keep us straight. I obliviously splashed, zigzagged, and generally wreaked havoc.  At one point Daniel shouted up to me that he could confirm that the water was indeed salty- I turned around confused at his obvious statement to see that my enthusiastic paddling had splashed him right in the face. It must be true love because he didn't resist coming home with me. 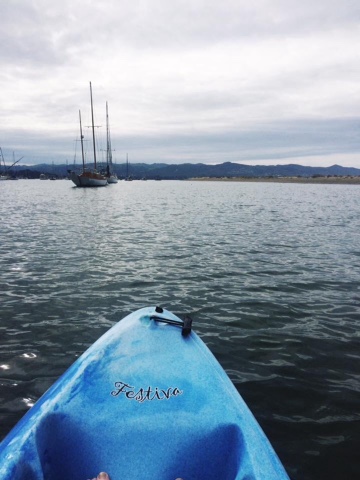 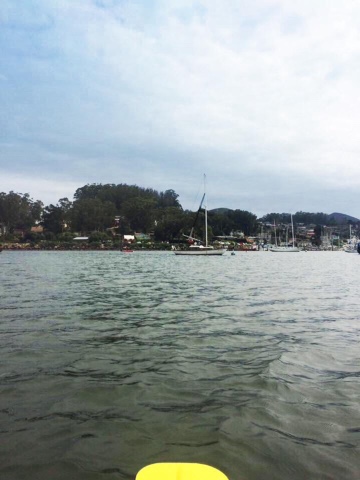 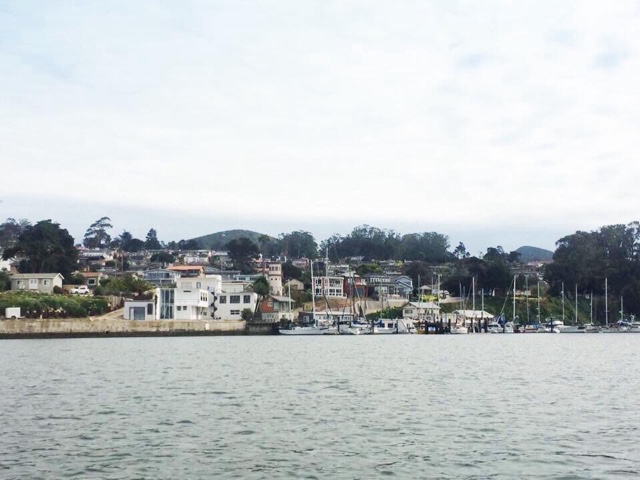 We were out for exactly an hour and it was lovely. Because you stay in the harbor you're never out in open ocean which kept my anxiety in check. Being in a 2 man kayak also kept my anxiety from surfacing, it helped me to know that Daniel was there to help me get out of any jam I found myself in. We did at one point hit a sandbar in what had otherwise been deeper water and I had a mini panic attack because I thought we were stuck. Ever the level headed one of the couple Daniel took control and we were moving again in no time.

Although, we enjoyed our first kayaking experience we've decided that our next water adventure will be a two man canoe. Daniel found the kayak uncomfortable because he's tall and I think a canoe would be better for my back. Lucky for us Sub Sea Tours also rents canoes!

After turning our kayak in, stripping off the life vests, and grabbing our shoes (they have a place for you to store them because trust me, they WILL get wet if you insist on wearing them.) we continued playing tourists and went to Giovanni's Fish Market and Galley. My personal favorite in Morro Bay is The Hofbrau but we also really enjoy Giovanni's when it's not crowded and want fish tacos or fish sandwiches. A side note: their garlic fries are delicious but you will kill people for days after so make a wise decision when they ask the ever important question of what kind of fries you want with your sandwich. 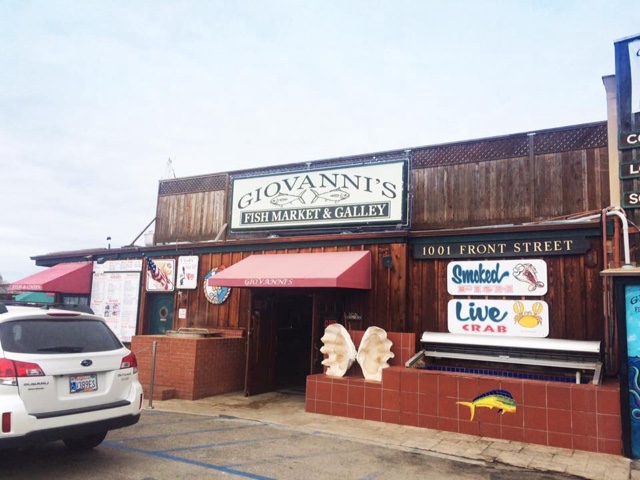 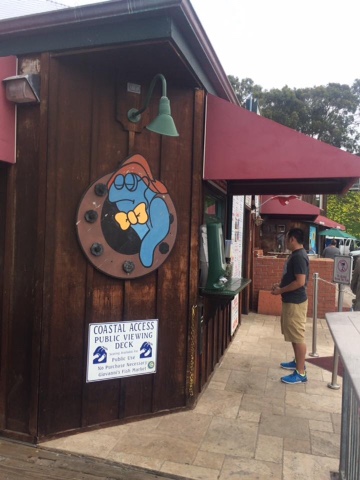 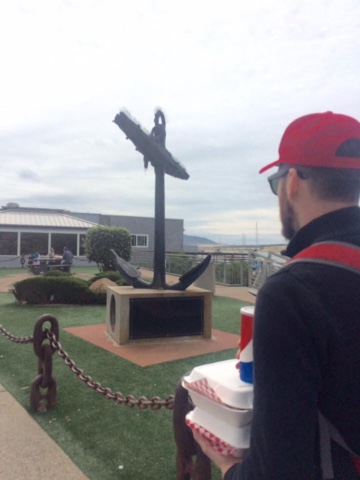 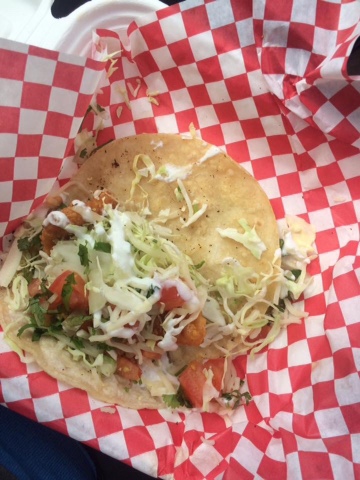 One fish taco down, one to go

Want to rent a kayak yourself? Or maybe take 9 of your friends and jump in the war canoe?
Sub Sea Tours and Kayaks is located between the Flying Dutchman Restaurant and Marina Square at 699 Embarcadero #9, Morro Bay, CA 93442. (805) 772-WIND (9463). www.SubSeaTours.com 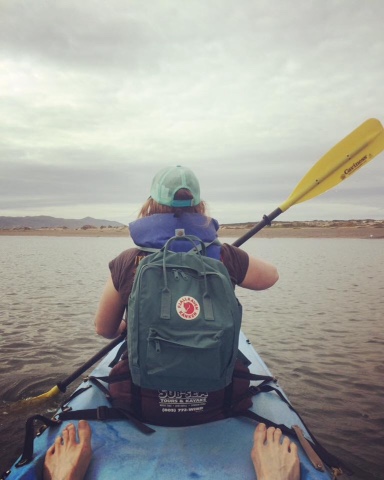 Off on the next adventure.
(Backpack available in store or online from:www.vivapaso.com)