You've probably been wondering where I've been. Well, between a very minor health setback which is limiting my exercise and the extremely hot weather California is having, I have been hunkering down in my air conditioned house when not at work. And what have I been doing while lounging on the couch? Watching Netflix, I'm ashamed to say (Okay I've read a book or two too!)! I feel like I've fallen into a black hole and that black hole is called Call The Midwife.

I'm obsessed. A client recommended it after listening to me lament the fact that there was no Downton Abbey or Sherlock- I needed a PBS fix! I have been firmly stuck in 1950's east London for at least a week now.  And yes, I just paused in the writing of this post to watch episode 3 of season 2 on pbs.org.

This fabulous drama is based on the journals of Jennifer Worth, the real life midwife the series follows. Jenny, as she is called, comes from a privileged background and finds herself quickly out of her depth- not with her job as a midwife but with the surrounding conditions as a newcomer to London's impoverished Poplar region. She suffers culture shock as she discovers the circumstances many of her patients live in, bugs on food, babies left in prams outside on the sidewalk unattended, overcrowded living arrangements, abuse, prostitution, and lastly a woman who is pregnant with baby number 25!

Once she settles into life in east London she starts to have a newfound respect for those she treats, surviving and even thriving in a setting she initially found unimaginable. Also endearing are her fellow midwives as well as the nuns in which they live and work with at Nonnatus House. You'd be hard pressed not to love Sister Monica Joan, a flighty, aging nun who may or may not be in the beginning stages of dementia. She is eccentric, fun loving and just a wee bit naughty! You've got to love a nun with a twinkle in her eye and appropriated cake up her sleeve!

Of course the real stars of the show are the babies that are born each episode. The writers have a way of  introducing the expectant mothers and you instantly care about their story- even though they are careful not to focus solely on those mothers the entirety of the episode. I dare you not to tear up just a little bit at some of these births!

This series has a new diehard fan and I can't wait to see how season two unfolds. I was super excited to find out that they have agreed to a third season that will air in 2014!

So, dear readers now you know where I've been hiding these last few weeks

Season 1 is available for streaming and DVD on Netflix and on PBS.org. Season 2 is currently airing on PBS and can be watched on PBS.org. Be advised that for some dumb reason the Season 1 Christmas special is NOT available on Netflix. It is however available on iTunes and on Amazon.

Bottoms up, Chaps! Enjoy the ride! 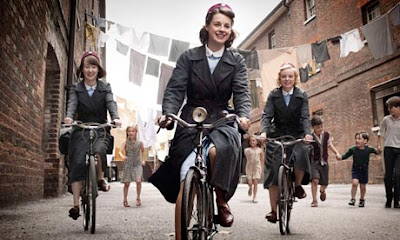