This is a recipe that I found on Pinterest and modified to suit our tastes. It looked too good to ignore!! It's not vegan, it's not completely organic and it's not remotely good for you- but man does it taste good!!! (I apologize for the bad lighting in the photos, my camera broke and I'm having to use my phone (which is nothing fancy and has no flash), and of course I chose to make these at night). 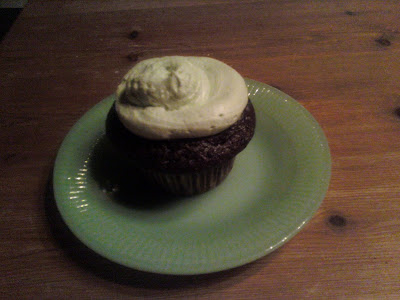 So first things first, I didn't have enough time to make both
the cookie and cake batter from scratch- so I purchased Trader Joe's chocolate cake mix and followed the directions. I did however make the cookie dough from scratch (and frosting for that matter). The only modification that I made on the cookie dough was substituting maple sugar (yes that says sugar and not syrup) for the white refined sugar, cuz I don't keep any in the house and have no plans to use it. It is not a direct 1 to 1 ratio. For every cup of sugar a recipe calls for you substitute 3/4 cup of maple sugar. I did however use the brown sugar that the recipe calls for- I don't feel as bad using that. :)
below is a photo of the finished cookie batter and the bake batter in the cupcake tin. 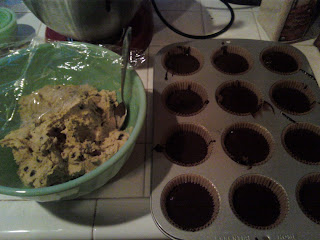 The first step after you make both batters is to pour the cake batter into the cupcake tin about 2/3rds of the way. Roll cookie dough into a large marble sized ball and drop in the center of the cake batter. Complete this step for all of the cupcakes. In a pre-heated 350 degree oven, place the completed cake/cookie combo. Bake cupcake for 21-23 mins. Your finished, unfrosted cupcake should look like the photo on the right below.... 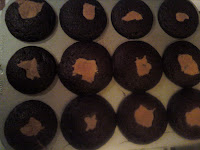 While the cupcakes were baking I made the buttercream frosting. (recipe to follow below-I forgot to take pictures while I was making it so no photos of the frosting process but you can see if on the finished cupcake- which I tinted mint green, just for fun.)

After the cupcakes cooled I put the frosting into a ziplock bag and snipped off the end to make a frosting bag. I piped the frosting in circles on the finished cupcakes. Because this is a buttercream frosting it sets up quite firm when refrigerated which is nice on one hand cuz the frosting holds its shape once on the cupcake but on the other hand you want to let the refrigerated cupcake warm to room temp before you eat it so the frosting is softer.
Below is the completed cookie in a cupcake- they are soooooo good!!!!
(read on for the frosting recipe) 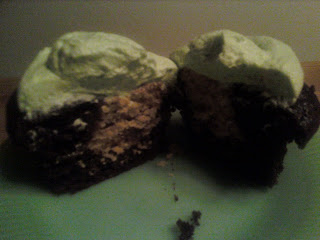 1 cup of softened butter- use salted butter instead of unsalted for a better taste.
4 tablespoons of half and half
4 cups of powdered sugar
3 teaspoons of vanilla extract.

put softened butter in mixer (or use a hand mixer) whip the butter. Add the half and half, and whip some more. Once the butter and half and half are mixed, slowly mix in the sugar. Once that is mixed add the vanilla- mix some more and voila! Delicious buttercream frosting!! This frosting will melt so be warned- don't put it on warm cupcakes, or leave the frosted cupcakes/cake out for too long- it won't be pretty!