Today's Food Adventure Brought To You By: Gwyneth Paltrow 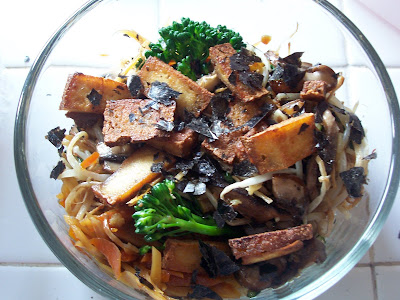 Gwyneth Paltrow's site Goop.com has some amazing stuff on it. That is where I found the recipe for this yummy (yet time consuming) dish called Bibimbop. (final product pictured above). Bibimbop is basically a rice bowl with lots of veggies. This dish is pretty labor intensive, as you have to saute and blanche vegetables, make a spicy miso sauce and cook a separate dish called Kinpira. Now that I've made it once it will be easier but doing this for the first time it took up quite a bit of time. So for the ingredients list and detailed instructions see Gwyneth's website by following this link: Bibimbop
Here's my attempt, with photos. See captions for descriptions. 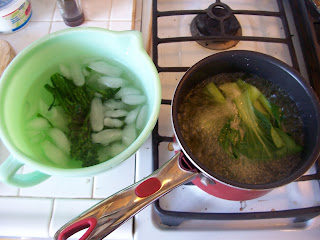 The first thing I did was blanche the broccolini and baby bok choy (which I over-cooked and ruined- so it's not in the final photo). I had never blanched veggies before so I had to look online for instructions. It's pretty easy (except for bok choy, LOL). Basically you boil the veg, but for a short time, you don't actually cook it all the way. Then you remove it from the boiling water, straight to a bowl of ice water. 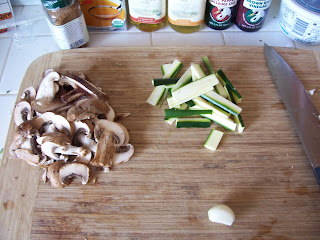 next I sliced up the zucchini, mushrooms and minced the garlic. For some reason I didn't take photos while making the spicy miso sauce, but it was at this stage that I made it. That sauce was really easy to make- reminds me of bbq sauce. I like mine spicy so I put in a lot of hot pepper sesame oil. 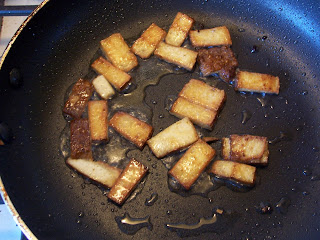 I chopped up some baked tofu and fried it in some sesame oil. I had never had fried tofu before and it's super yummy!!! 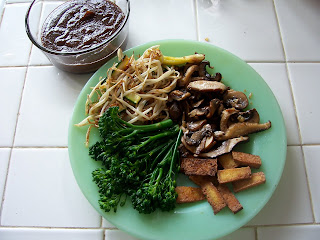 Here's a shot of all of the veggies that will be tossed in with the rice. So we have: blanched broccolini, sauteed bean sprouts & zucchini with garlic and ginger, sauteed mushrooms (also with garlic and ginger) and the fried tofu. I couldn't find sesame seeds (crazy I know- I went to 2 different stores!!!) and I also couldn't find the kimchi from the original recipe so those two things are missing from mine. Below are the photos for the second dish in this recipe- Kinpira. 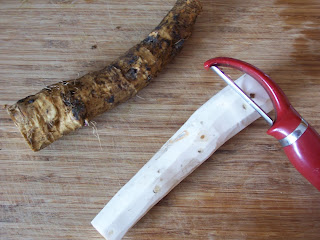 Here is the burdock root. It looks like a tree branch before you peel the skin. It peels just like a carrot. 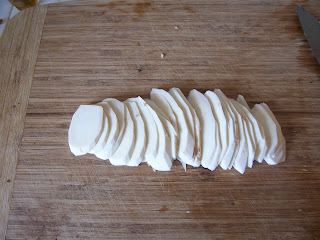 cut the burdock root at an angle as thin a possible. My knife wasn't really sharp enough to properly do this with the burdock or the carrot, but it worked fine, I'm not too picky. Stack the burdock rounds in a row to prepare for "julienne" cuts. This is explained visually on the video on Gwyneth's website. 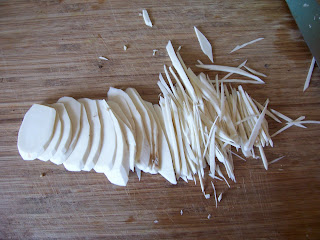 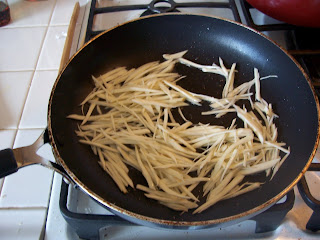 saute the burdock root for 5 mins before adding the carrot. 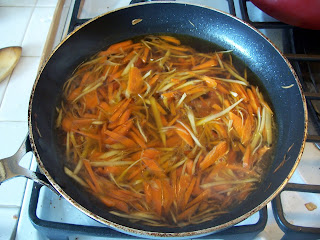 after adding the carrot, add water (or the japanese stock explained in Gwyneth's recipe). At this point you will also add the Mirin, Soy Sauce and agave nectar. Let this mixture boil, cover and reduce heat to low. You'll cook this for 15 mins. After the 15 mins you'll put the heat back up to high, remove lid and sauce until sauce is reduced and veggies are shiny. 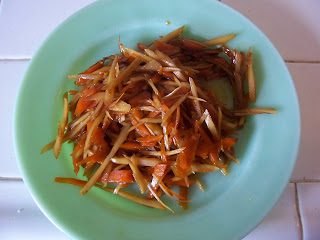 here is the finished Kinpira. 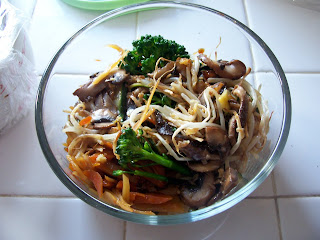 in a bowl, put brown rice and top with all of the ingredients. The sauce is hiding underneath the veggies. The picture above is everything but the fried tofu and shredded nori. Below is the final product with all ingredients. 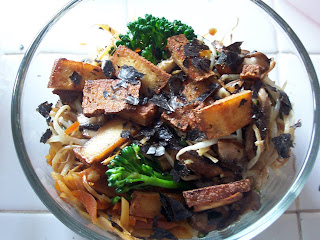