So the first time I tried this recipe from Alicia Silverstone's book I didn't cook it long enough (which I didn't realize until too late) and it was not so good. BUT I've made it twice since and it's really yummy!! So here we go.....

so here's the mochi before slicing into 1/2 inch thick slices. and yes that's a tiny cutting board- no use in getting the big one dirty. 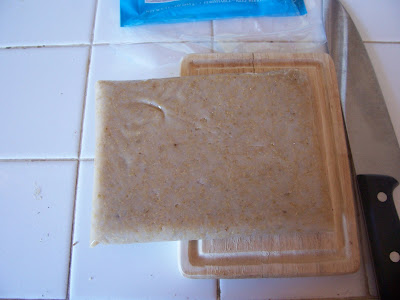 lay the mochi slices on the pre-heated waffle iron. you don't need to oil the iron, the mochi won't stick. I've done it both with the cut side down and non-cut side down. it doesn't seem to make a difference. (the mochi slices have a few dents in the photo below because I put the lid down on the waffle iron and then remembered that I hadn't taken a picture yet.) 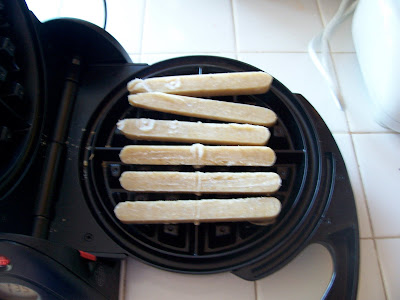 after experimenting I've come to the conclusion with my waffle iron that I need to cook the waffle for 10 minutes. waffle irons vary so you'll have to experiment with your own. the first time I tried this recipe I cooked them following the waffle irons recommended cooking times and it was so undercooked and gooey on the inside- it was inedible. 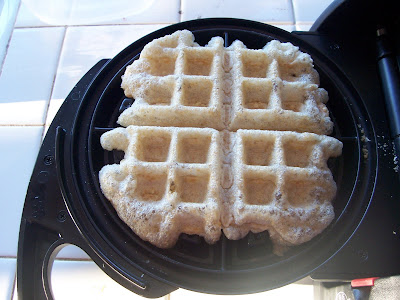 I finished this up with a little bit of pure maple syrup. the book calls for you to make a fancy syrup with chopped walnuts and brown rice syrup. I'm sure it's delicious but the pure maple syrup is easier. YUM!