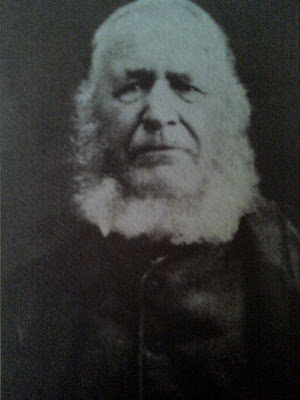 This dapper fellow is my Great x's 4 Grandfather on my Father's side- he sure was a looker!

Shakin' this family tree has produced some very interesting people. LOTS of Reverends, Deacons, Ministers, A Mennonite leader executed in front of his family while at home, Ship Captains, a Salem Witch (yes one of the originals!!!), a Massachusetts's Governor, a signer of the Declaration of Independence, intermarrying cousins, a man buried near the grave of Mother Goose, a President of Harvard and Founder of Yale, 3 siblings marrying the 3 siblings of another family, English Loyalist's that had to flee to Canada after the Revolution and Patriots who helped start the Revolution, Civil War Yankees and Confederate soldiers, lunatics in a Texas insane asylums (not a direct relations, thank goodness), yellow fever victims, a casualty of the French Indian War, a family all but completely massacred in an Indian raid.

We're Irish, Dutch, German, English and a bit Scottish- all this while I thought we were English, Scottish and maybe some German, little did I know that the Scottish have been hard to come by, the English are subtly dominating with their Boston tea parties, the Irish are popping up EVERYWHERE (it's like they didn't believe in birth control or something), the Germans have efficiently infiltrated both sides of my family, and the Dutch have colonized my dad's side like they own the place.

Let's review two of the more interesting (and better documented ones, who both happen to be on my mother's side).... I think everyone would unanimously like to start with the witch. 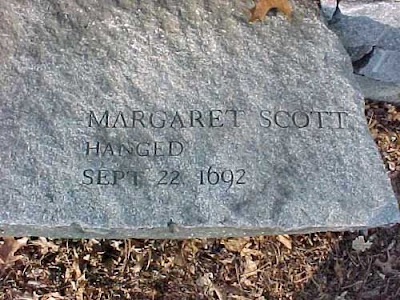 Margaret Stephenson Scott is my Great x's 10 Grandmother on my mother's side. (That's a lot of greats!) Margaret was one of the original 20 "witches" hanged in the Salem Witch Trials in 1692, along with Rebecca Nurse, Giles Corey (who was crushed to death), Sarah Good, Martha Corey etc... The Widow Scott (who was one of the oldest accused) found herself accused after living a long life for those times, losing a husband, bearing 7 children and losing 4, fending off suitors, losing her land and living a life as a beggar. She was accused by 3 people- one of them a rejected suitor who wanted her land, and imprisoned 45 days before her execution. She professed her innocence until her execution. Margaret was hanged with 7 other people (Martha Corey, Mary Easty, Alice Parker, Ann Pudeator, Willmott Redd, Samuel Wardwell and Mary Parker are hanged with Margaret. Giles Corey is pressed to death. Dorcas Hoar escapes execution by confessing.) on 22, Sept 1692 on Gallow's Hill, Salem, Massachusetts. Margaret Scott's name was not cleared until 1954, 262 years after her death.

Now for the Governor, my Great x's 10 Grandfather (there was just something about 10 generations back),: 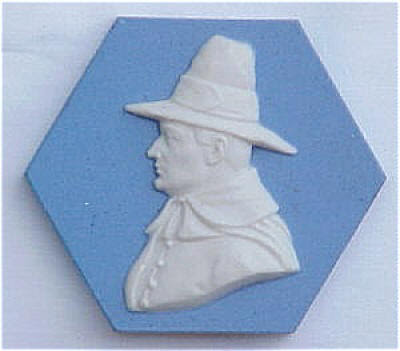 Not only was this fellow a Governor of Massachusetts but he and one other man founded Newark, New Jersey (apparently Newark is supposed to be New Ark- like Noah's Ark- oh those Puritans!). He must have been okay as a Governor because most of the info about him kind of glosses over the fact that he was Governor and focuses more on the founding of Newark. His grandson was one of the signers of the Declaration of Independence and is buried near Mother Goose in Boston- I'm related to him 2 different ways and it kind of does my head in to figure that out....anyway back to the Governor, he helped found Newark, didn't get along with his co-founder very well so he moved back to Connecticut where he lived before founding Newark, and died in 1710. Apparently Thomas Edison is a descendent of Robert Treat, but I haven't researched how- but i do know that it's not from my direct line, so I can't claim him.... darn it, all we were missing was an Inventor genius!!

**I'm currently trying to find a connection with my Dad's Dutch/Swiss Mennonite's with the founder of the Amish branch, Jacob Amman, as we have a bunch of Amman, Ammen, an Amen ancestors from the Netherlands and Switzerland where he was from...
This my friends is why I'm online all of the time but never answer the "chat" from Facebook- I'm a researching fool!!